Mass Effect Andromeda Had Designs For Up To Ten New Alien Species, But They Were Cut For Budget, Scope, And... Cosplay 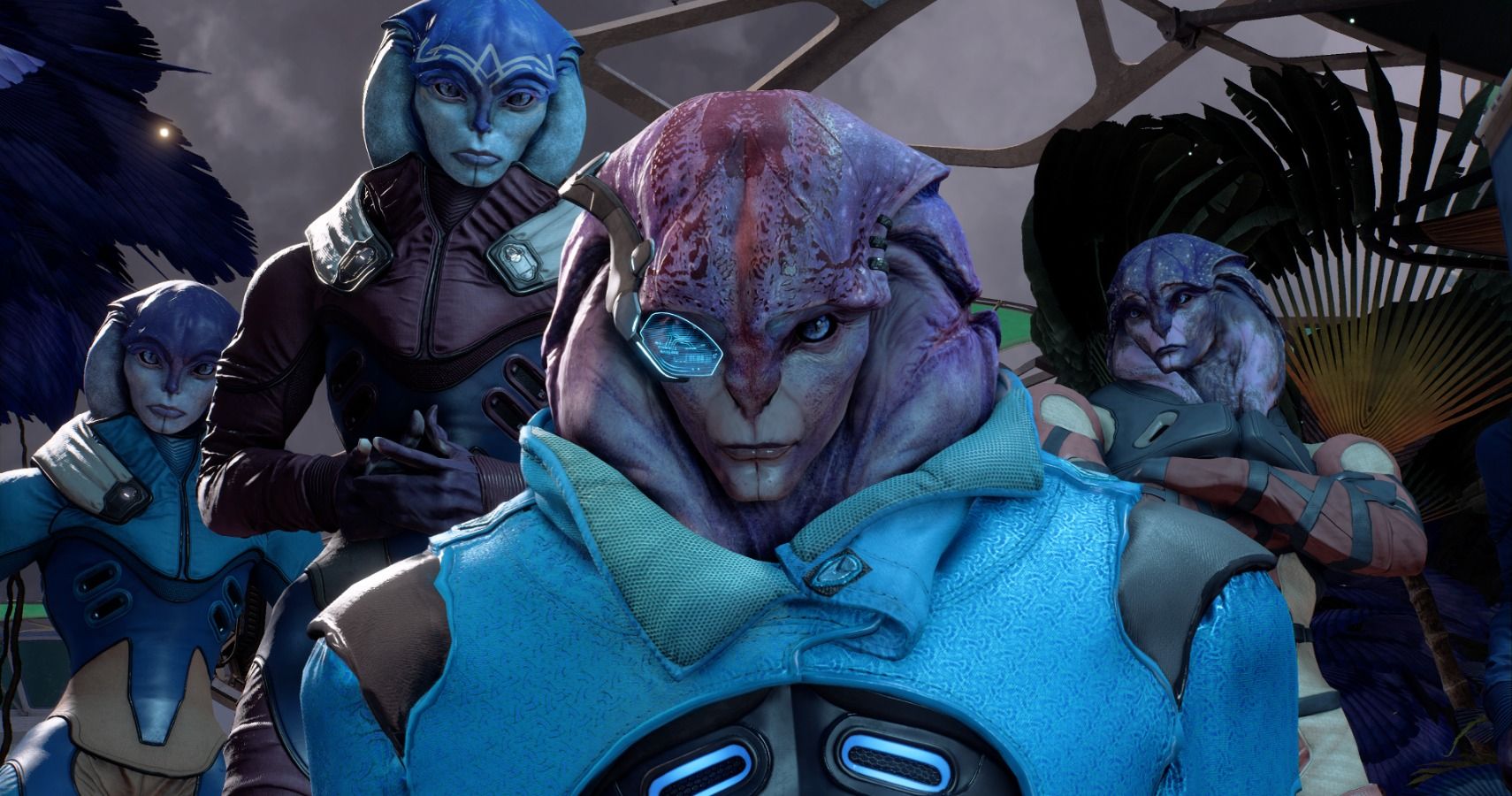 Mass Effect Andromeda Had Designs For Up To Ten New Alien Species, But They Were Cut For Budget, Scope, And... Cosplay

While we only saw two new species in Mass Effect Andromeda - which turned out to be the same species - the writers proposed up to ten more.

After speaking to various developers who worked on Andromeda - some of whom were there at the beginning, others who saw it through to the end - I’ve learned quite a bit about what happened here. First of all, there were several more species designed for this galaxy. One writer lists having proposed “five or six” new alien types, while another states that the ones BioWare opted for in the end were specifically chosen for being in “cosplay-safe” territory. Another dev mentions that an entire system was constructed just to facilitate communication between species who were indigenous to Andromeda and those who had arrived from the Milky Way.

The “species who were indigenous to Andromeda” part is important, given that there were also different ideas for how to handle first contact - making the Pathfinder a violent colonist who shoots first and asks questions later wasn’t something that was set in stone from the get-go.

“I think it was a project that couldn't have possibly lived up to expectations,” Neil Pollner tells me. Pollner was a senior writer on Mass Effect 3 before going on to write parts of Andromeda. “Not just the high bar of the original trilogy, but the logical expectations anyone would have of Mass Effect going to a whole new galaxy. Because the scope of [the first] Mass Effect was so incredibly massive, there was an inherent promise that you'd be getting a massive new experience with a ton of new things in [what was supposed to be the first] Mass Effect Andromeda - new species, new lore, an entire new galaxy at your fingertips, etc.

“But we were only given the budget for two new species, plus the Remnant. Not to mention that we couldn't even include all the Milky Way species. And we weren't going to be able to let you travel throughout the galaxy. This meant that we had to develop the story around some pretty glaring inorganic limitations. So, not only did you get something that felt (and was) much smaller than what you got before, almost everyone playing the game probably had something that they really liked about Mass Effect that just wasn't there.”

Pollner goes on to explain something I mentioned above - that there’s an inherent disconnect between making your character an explorer in a game where the vast majority of gameplay involves killing. “Ryder the explorer should have a challenging and dynamic first contact experience,” he explains. “Instead, you're almost immediately killing kett. So, some very basic pillars just weren't lining up.”

When I ask about the fact that several species had apparently been cut from the game - something I had already learned in previous interviews - Pollner assures me that I had “no idea” of what was dropped in the early days of Andromeda. He also lamented the iconic narrative and branching complexity of earlier BioWare games, stating that he wishes the team had been able to maintain the same level of variation, options, and consequences as the revered RPGs the studio was known for.

“The other BioWare Montreal writers and I were dreaming up and developing things for Andromeda months ahead of Edmonton officially starting the project - i.e. before the budget and scope had been decided/communicated,” Pollner says. “We just knew that we were going to Andromeda, with almost nothing else established, including even when in the timeline it would happen. And we set out to brainstorm and grow ideas that could organically serve that general premise.

What does "cosplay-safe" mean?
S

Bernd Lauert said:
What does "cosplay-safe" mean?
Click to expand...

So a beautiful woman showing some skin? Gotcha.

Well, alien variety and the original-ness of new alien race designs was a huge problem in Andromeda... but it wasn't nearly the biggest problem that game had, i'm afraid.

Sounds even worse, than what we got.

IbizaPocholo said:
He also lamented the iconic narrative and branching complexity of earlier BioWare games, stating that he wishes the team had been able to maintain the same level of variation, options, and consequences as the revered RPGs the studio was known for.
Click to expand...

As a professional it is your responsibility to clearly communicate vision and ideas to the higher-ups and get executive buy-in. Can we finally stop with 'poor me, a lonely dev in the sea of business sharks' BS? With articles like this always remember there is the other side:

That's one of the things that hurt the game, imho. They were sidestepping all the shit by going into a new galaxy. But for god's sake, it didn't feel like you'd entered a new galaxy. As far as I am concerned, this all could've taken place in the Milky Way somewhere.

There are no indigenous species in andromeda. The Kett are from another galaxy and the Angaran were created by the Remnant 300 years prior to the game.

"making the Pathfinder a violent colonist who shoots first and asks questions later" even though on meeting the Kett you try and make peaceful contact first and get shot at so fight back, the Remnant attack you on sight and the Angaran are cautious but agreeable and end up friendly.

Don't get me wrong, the game has plenty of issues but the whole colonial invader thing isn't one of them. I can get behind the lack of enemy variety and dodgy running animations and half assed story. You don't need to invent problems for this game.
T

Bernd Lauert said:
What does "cosplay-safe" mean?
Click to expand...

I'd guess baggy clothes only with no skin shown above the ankle or below the neck if it's a girl.

I'd guess baggy clothes only with no skin shown above the ankle or below the neck if it's a girl.
Click to expand...

If it really does mean that then think about how mental them doing that is:

They create fictional alien species and then impose the shame of the worst of humanity in 2021, what a bunch of fucking submentals. What if the aliens don't even have a concept of shame? They don't even have sexual attraction because they reproduce asexually (Boo!), or a 100 other interesting reasons they could come up with to make great new alien designs. You could right a paper about how crazed that is because there are so many factors to consider that would render this thinking nonsensical.

I thought Mass Effect was the closest there was to a modern analogue of Star Trek (Kinda insulting I know, but also not truly ME's fault since thats live action vs. artifical graphics so its an unfair comparison) but they are throwing it all away for something people will laugh about in 10 years. 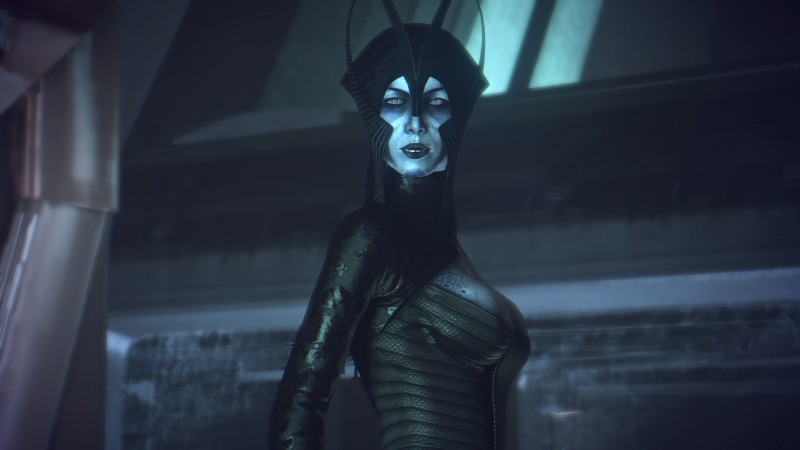 The best example of this? The Benezia fight in Mass Effect 1. Let's dive in.

www.gameinformer.com
You must log in or register to reply here.

Joshmyersbv replied
Jul 15, 2022
Mass effect 3 is so weird, it was clearly rushed and it feels like it had a low budget.