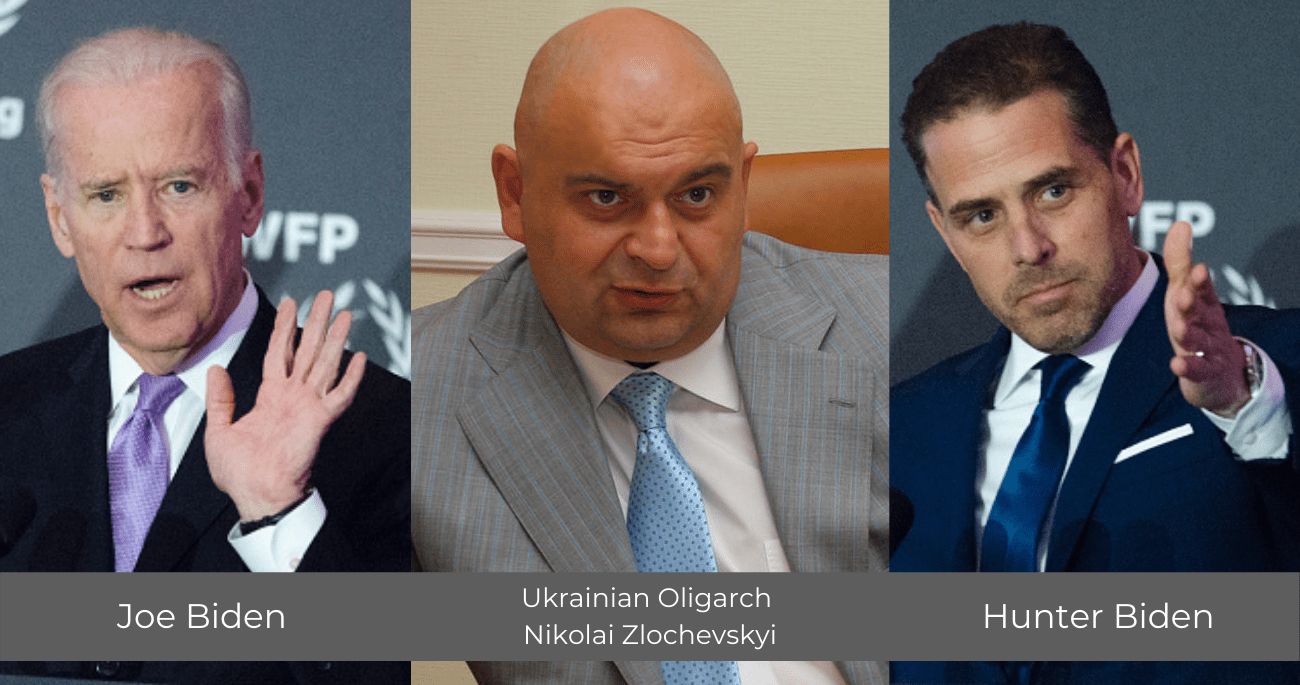 The verified facts about Joe Biden’s dealings with Ukraine implicate him in a web of corruption that involves bribery, extortion, and obstruction of justice.

After big tech companies suppressed a New York Post article exposing written evidence that Joe Biden “spent some time together” with a top executive of a corrupt Ukrainian energy firm that was enriching his son, media titans are misleading the public about the central facts of this explosive affair.

Twitter, for a prime example, pinned a post to the top of its home page claiming that Biden “played no role in pressuring Ukraine officials into firing the prosecutor” at the core of this case.

That is flatly disproven by the words of Biden himself, who stated on video that he told Ukraine’s president and its prime minister that he would withhold $1 billion in U.S. aid from their nation unless they removed the prosecutor. “If the prosecutor is not fired,” warned Biden, “you’re not getting the money.” Biden then added, “Well, son of a bitch, he got fired.”

Twitter’s brazen falsehood only scratches the surface of media misinformation about this matter. In addition to spreading outright fictions, media outlets are failing to present key verified facts that are necessary to see the big picture. These facts—which are documented in the following bullet points—build upon each other and implicate Joe Biden in a web of corruption that involves bribery, extortion, and obstruction of justice:
Click to expand...

A common media refrain is that the content published by the NY Post from Hunter’s laptop is not authenticated or verified. Leslie Stahl of CBS’s 60 Minutes went as far as to say that it “can’t be verified.” Such claims are belied by the fact that key aspects of it have already been verified.

For example, the listed recipient of one of the most damming emails released thus far has confirmed that he received the email. Tony Bobulinski, a former business partner of Hunter’s, issued a public statement that he is “the recipient of the email” and that the “email is genuine.”

The email lays out how the “equity” of a business venture with “CEFC” (a Chinese energy company) will be “distributed.” It does this by using the initials of the people copied on the email and numbers that add up to 100 percent. The last one of these says “10 held by H for the big guy?” According to Bobulinski, “the big guy” is “in fact a reference to Joe Biden,” as “Hunter Biden called his dad ‘the Big Guy’ or ‘my Chairman’.”

Beyond such first-hand testimony, the NY Post points out that it has published an array of pictures and emails from the laptop that “contain an extraordinary level of detail,” “most of which have nothing to do with Ukraine or China.” These include, for example, a picture of Hunter in a bathtub and a picture of a Biden family meal, along with emails to friends and family all bearing dates and times. On their own and collectively, these confirmable details corroborate that these are Hunter’s communications.

Moreover, if any of these communications were fictitious, it would be easy to prove this by showing that other people copied on the emails and texts received something different. Yet, no one has even claimed this is the case, much less presented proof of it.

While ignoring all of the evidence that supports the authenticity of the laptop’s contents, Joe Biden, Adam Schiff (Chairman of the House Intelligence Committee), and a group of government intelligence officials led by James Clapper (Obama’s Director of National Intelligence) are claiming that the contents of the laptop could be or definitely are Russian “information.”

Yet, as Clapper and company admit, “we do not have evidence of Russian involvement—just that our experience makes us deeply suspicious that the Russian government played a signiﬁcant role in this case.”

That same group of people who are now invoking Russia previously spread demonstrable falsehoods that Trump and his team colluded with Russia in the 2016 election. These rampant accusations were disproven by a 2-year, $32 million investigation by an independent counsel which “did not establish” or “identify evidence” that members of the “Trump Campaign” or “any U.S. persons” “conspired or coordinated with the Russian government in its election interference activities.”

Furthermore, the Inspector General of the U.S. Department of Justice (an Obama appointee) “identified at least 17 significant errors or omissions” in warrant applications that the Obama administration used to surveil people associated with the Trump campaign for their Russia collusion investigation. The Inspector General also reported that he “did not receive satisfactory explanations” for these misleading warrant applications.

Nevertheless, a range of broadcasts and publications by NBC, the Daily Beast, the New York Times, Business Insider, and Vox have given more airtime and credence to politically opportune speculation from partisans who previously spread misinformation about Russian collusion than to the verifiable facts of this matter.
Click to expand...

Another common media canard is the uncritical parroting of this statement from the Biden campaign: “We have reviewed Joe Biden’s official schedules from the time and no meeting, as alleged by the New York Post, ever took place.” That talking point is effectively meaningless because Biden’s official schedules are not comprehensive, and after Politico pressed the campaign about this matter, it reported:

Biden’s campaign would not rule out the possibility that the former VP had some kind of informal interaction with Pozharskyi (the energy company exec), which wouldn’t appear on Biden’s official schedule. But they said any encounter would have been cursory.
Click to expand...

Even that admission is deceptive because Biden’s official schedules are so incomplete that they are even missing White House meetings. A prime example is an Oval Office meeting on January 5, 2017 in which Biden, Obama, and other administration officials discussed prosecuting Trump’s incoming National Security

While failing to report those key facts that illuminate this affair, major media outlets are spreading conspiracy theories, half-truths, and brazen falsehoods that hide what occurred. This includes but is not limited to claims that:

No evidence has yet emerged that Joe Biden voiced illicit intentions about his dealings in Ukraine, but the verified facts about his actions align with textbook definitions of nepotism, bribery, extortion, and obstruction of justice.

Moreover, grossly misleading coverage of this matter by Twitter, the Washington Post, NPR, Bloomberg, CNN, CBS, the New York Times, and the Associated Press is consistent with recent academic research that finds large corporate media outlets “play a significant and important role in the dissemination of fake news.” In turn, scientific surveys show that a large portion of the public harbors critical misconceptions that have been spread by these outlets.
Click to expand...

This looks incredibly damning. It blows my mind that this information is being suppressed by big tech and MSM. Dangerous times, indeed.

The article was too long to post. There is much more at the link. This is a pretty thorough accounting of what is known publicly to date, with a ton of supporting links. Hopefully, anyone who is truly interested in finding out what the Bidens are up to finds this information useful. If anyone is aware of any errors, omissions, or outright falsehoods, by all means point them out.
Reactions: cryptoadam, DeepEnigma, DunDunDunpachi and 1 other person

Smooth brains have been saying “but he dindu nuffin!”
Reactions: cryptoadam and gunslikewhoa
You must log in or register to reply here.