Shouldn't have let DJ go, we did get Askren though...
Reactions: Tesseract, Cunth and Cult of FartNoise

Shouldn't have let DJ go, we did get Askren though...
Click to expand...
DJ is a national treasure. Glad he is doing work in ONE. This tweet is hilarious and true. Henry is just doing the Conor McGregor where he wears 2 titles and defends none.


Crazy that Figueiredo forfeited his right to the title because of his weight. I wonder how frustrated he is with himself today since he has had some time to reflect.
Reactions: Tesseract, Unknown Quantity and Cult of FartNoise

Has Cejudo said he’s officially never cutting to 125 again? Or is 125 still in play for him?

I would love to see Figgy vs Cejudo at 125
Reactions: Tesseract, Cunth and Unknown Quantity
K

Alexander Hernandez vs. Islam Makhachev in works for UFC 249 in Brooklyn

A lightweight clash between Alexander Hernandez and Islam Makhachev is the latest addition to UFC 249.

Apparently Islam Makhachev vs Alexander Hernandez is in the works. Islam is gonna break this dude in half.
Reactions: Tesseract, Cunth and Unknown Quantity

So is this always going to be a part of MMA or is there some sort of system that could be implemented to overturn a stoppage, on the spot, and continue a fight from that moment onward?

Do you guys listen to believe you me? I love Bisping
Reactions: Thing on a Spring, Tesseract and Cult of FartNoise

Cunth said:
Do you guys listen to believe you me? I love Bisping
Click to expand...
Yes. Pretty solid show. I try to catch UFC Unfiltered as well
Reactions: Tesseract and Cunth

joanna with the cringe

Spencer famously lasted 3 rounds against Cyborg, losing a mostly one sided decision, getting pretty beat up but showing an iron chin and toughness in the process. 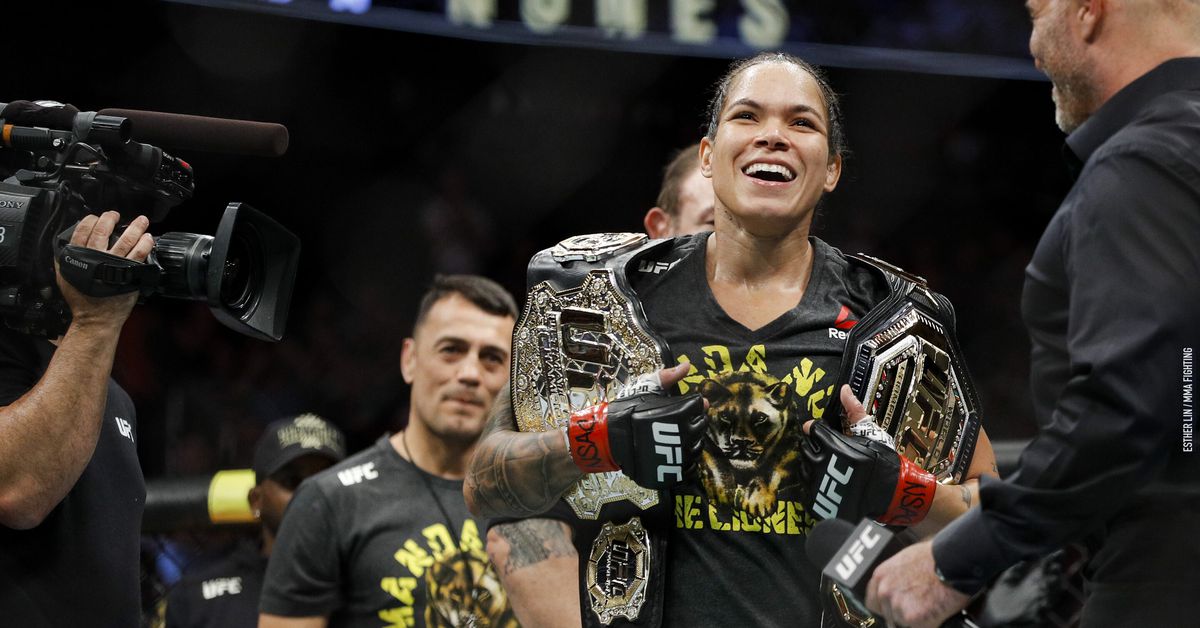 Amanda Nunes will defend her featherweight title for the first time against Felicia Spencer at UFC 250, which takes place on May 9 in Sao Paulo, Brazil.

Spencer is tough as hell and has solid grappling, I suspect this will be a 25 minute beatdown from Nunes though

1st round KO for nunes my prediction
Reactions: Tesseract, KingdomHeartsFan and Cult of FartNoise
D

DKehoe said:
Click to expand...
LOL that was one of the best press conferences ever.

"What is it about Tony that makes this fight important for your legacy?"

That press conference and stare down had me giddy like a little kid. Khabib kicking Tony's fake belt off the stage was hilarious.
Reactions: Cult of FartNoise, Tesseract and Unknown Quantity
D

Khabib vs Ferguson gets me all antsy in my pantsy

What a fuckin’ fight
Reactions: Tesseract and DKehoe

DKehoe said:
Click to expand...
I want to see that too

Cult of FartNoise said:
Khabib vs Ferguson gets me all antsy in my pantsy

What a fuckin’ fight
Click to expand...
I was so disappointed because they were going to be the comain event at the fight night in my town behind lyoto machida . Both fights didnt happen. Freakin sucks
Reactions: Tesseract and Cult of FartNoise

manfestival said:
I want to see that too

I was so disappointed because they were going to be the comain event at the fight night in my town behind lyoto machida . Both fights didnt happen. Freakin sucks
Click to expand...
that’s such a bummer

would be such an amazing fight to watch live
Reactions: Tesseract

KHABIB sits down with ESPN after the Tony presser

If I learned one thing in the Zhang, Joanna fight is that Zhang misses a lot of the punches she throws, I noticed it early on and thought she was gonna gas out fast like that but she was able to keep the pressure on the entire fight. Never seen anyone swing for the fences, miss that much and maintain that pressure for 5 rounds. That was insane.

It seems like when she punches she just throws the combos shes been practicing when hitting pads with her coaches. She doesn't deviate away from that at all. That's a big problem, she can't adapt to her opponent in the middle of a fight.
Last edited: Mar 8, 2020
M

Good coverage of the press conference inside & out.
Reactions: MaestroMike and Tesseract

Logan Pail would be suicidal to legitimately spar with Paulo Costa
Reactions: Tesseract

This is gonna be a great fight on Saturday

Alex The Champ is on Rogan today

Hey guys, here's an idea to ruin your day. What if coronavirus leads to Khabib vs Ferguson getting cancelled?
Reactions: KingdomHeartsFan, MaestroMike, Cunth and 3 others

DKehoe said:
Hey guys, here's an idea to ruin your day. What if coronavirus leads to Khabib vs Ferguson getting cancelled?
Click to expand...

don't bring that cancel shit into this house
Reactions: Cult of FartNoise, DKehoe and Unknown Quantity

Noice
Reactions: GymWolf, Cult of FartNoise, 12Goblins and 4 others

This weekends ufc is gonna have no spectators cause of corona
Reactions: Cult of FartNoise and Unknown Quantity

Cunth said:
This weekends ufc is gonna have no spectators cause of corona
Click to expand...
Terrible for people attending, but last few in Brazil have had shit fans so no sympathy here.

Same for NGANNOU VS ROZENSTRUIK.

So no point going to Brazil, have it at the UFC institute, just disinfect before each fight.
Last edited: Mar 12, 2020
Reactions: MaestroMike, Cult of FartNoise and Cunth

Reactions: MaestroMike, Unknown Quantity, Cult of FartNoise and 1 other person 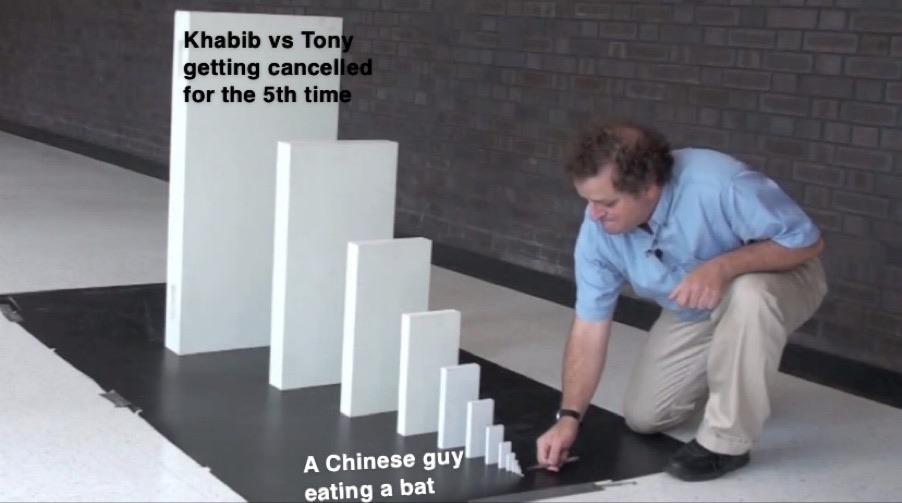 Cult of FartNoise said:
Click to expand...
UFC Brasilia will be at an empty stadium and will apparently run 2 hours early. Double check just in case.

Other fight nights moved to UFC Apex Institute. London UFC might have a crowd, but anything can change in a week. They've postponed the football there and this'll probably be cordoned off, hopefully not.

Khabib v Tony still OK... New York has a 500 person limit for events, most likely in empty stadium but might be able to squeeze in a few people. Don't care as long as fight goes through.
Reactions: Cunth and Cult of FartNoise


Lee is just one of those “too big for 55, too small for 70” guys
Reactions: MaestroMike, Cunth and Unknown Quantity

Fucking Google. I always just used to search ‘ufc’ and it would bring up the next event with starting time and all the matchups. Now it’s gone
Reactions: Cult of FartNoise

so for european people (italy if you feel particularly useful today), what is a good time to stop watching youtube to not spoiling the ufc brasilia fights results considering they are even 2 hours early? i'm the worst with calculating different time zones...

like normally i stop watching youtube at 00:00 or a little later for normal event in american cities.
Last edited: Mar 14, 2020

It really is weird with an empty arena

shes completely on empty and starting to get pounded

cant wait to hear eddies views on the corona virus
Click to expand...
hope they wash their hands
Reactions: Skyr