If only that trailer also was in HD...

The trailer says something about adhocparty support. Does that mean we can basically play online with this PS3 version?
T

Monster Hunter in HD *and* 3D *and* playable with proper controller? Holy crap.

Kojima, you know what you have to do.

Indeed. If this makes it to EU land, I might have to pick up a PS3.
S

Wait, so does it not have a proper online mode?

epic news. thanks for info
definitely must buy
W

No, seems like it's gonna rely on Adhoc Party.
W

Is this the same game as the one sony demoed at the NGP reveal?

Clearly this is gonna be another million+ seller. Capcom really struck gold with MH.
F

Wonder if it will sell well in Japan.
R

French said:
Wonder if it will sell well in Japan.
Click to expand...

Well, it has a good chance of selling a few more PS3's.
R

i like how the trailer kept showing the guy getting beat up. it's normal in monhun!
L

slaughterking said:
Wait, so does it not have a proper online mode?
Click to expand...

I presume it runs ad-hoc party in the background to get the job done. Kind of an obtuse way to go about things but it's the only way to allow for cross platform play and probably won't feel all that different from an integrated online mode anyway.
G

Hello SCEJ, don't you think you have to announce something else instead? the current status of PSN?
T

"PSP Remaster" titles will deliver rich and immersive gaming experience on the PS3 system through stunning high-definition graphics as well as through additional new features for these titles, such as operability on the PS3 Wireless Controller (SIXAXIS® and DUALSHOCK®3), new add-on content or stereoscopic 3D support*1. Users will also be able to utilize the same save data from the original PSP game for the "PSP Remaster" version and enjoy the game on the go with the PSP system and continue the game at home on a large TV screen using PS3. Ad-hoc mode gameplay will also be supported through "adhoc party for PlayStation Portable" application on the PS3 system*2.

For Japan, the first "PSP Remaster" title to be introduced will be Monster Hunter Portable 3rd HD Ver. from Capcom Co., Ltd. Monster Hunter Portable 3rd for the PSP system is the latest installment of the blockbuster Monster Hunter franchise, which has alone shipped over 4.5 million units in Japan since its release in December 2010. The graphics of the PS3 version, including monsters, fields, equipment, as well as Felyne Comrades, are more gorgeous and vibrant than ever, and will deliver dynamic gameplay when played on the large TV screens. SCE, with strong support from software developers and publishers, will deploy various measures to enhance the software title line-up for the PS3 system.

SCE will continue to further expand the PS3 platform and create a new world of computer entertainment with innovative and exciting new titles.

*1 What content will be supported will depend by titles.

*2 Not all titles will be supported. Some software title will not function properly depending on the user's network status and or the software feature. The application is not supported on 20GB model (CECHB00) which does not support Wi-Fi feature.
Click to expand...

if they have an English Press Release, does that mean they will release in NA too?

I want to believe
Z

Awesome. This is also why we haven't heard anything about MHP3 on PSP in the west yet. I wonder if the downloadable version is NGP compatible or the Blu-ray comes with a portable version hidden until NGP is out. It would make a lot of sense as we have seen NGP being able to run PS3 games quite well.
T

darkwing said:
if they have an English Press Release, does that mean they will release in NA too?

From the press release

Ok, done, shit is practically confirm that we will see a GOD OF WAR portable Series on PS3 and Metal Gear 5 on it too. Also one thing i don´t understand, actual peoplo on GAF are saying that the NGP is doomed on the WEST? are you for real, why do you think that?
F I wonder how this will sell compared to the Wii game.

This has so much potential. Can you imagine a Dissidia PS3 remaster with online play and trophies?

Now I'm actually interested in trying out a Monster Hunter game!
B

Holy moly, that is beautiful o_o

OMG I just saw the video. My life is going to be so ruined by this!!!
S

Xater said:
If only that trailer also was in HD...

The trailer says something about adhocparty support. Does that mean we can basically play online with this PS3 version?
Click to expand...

Here's a higher quality version of the trailer 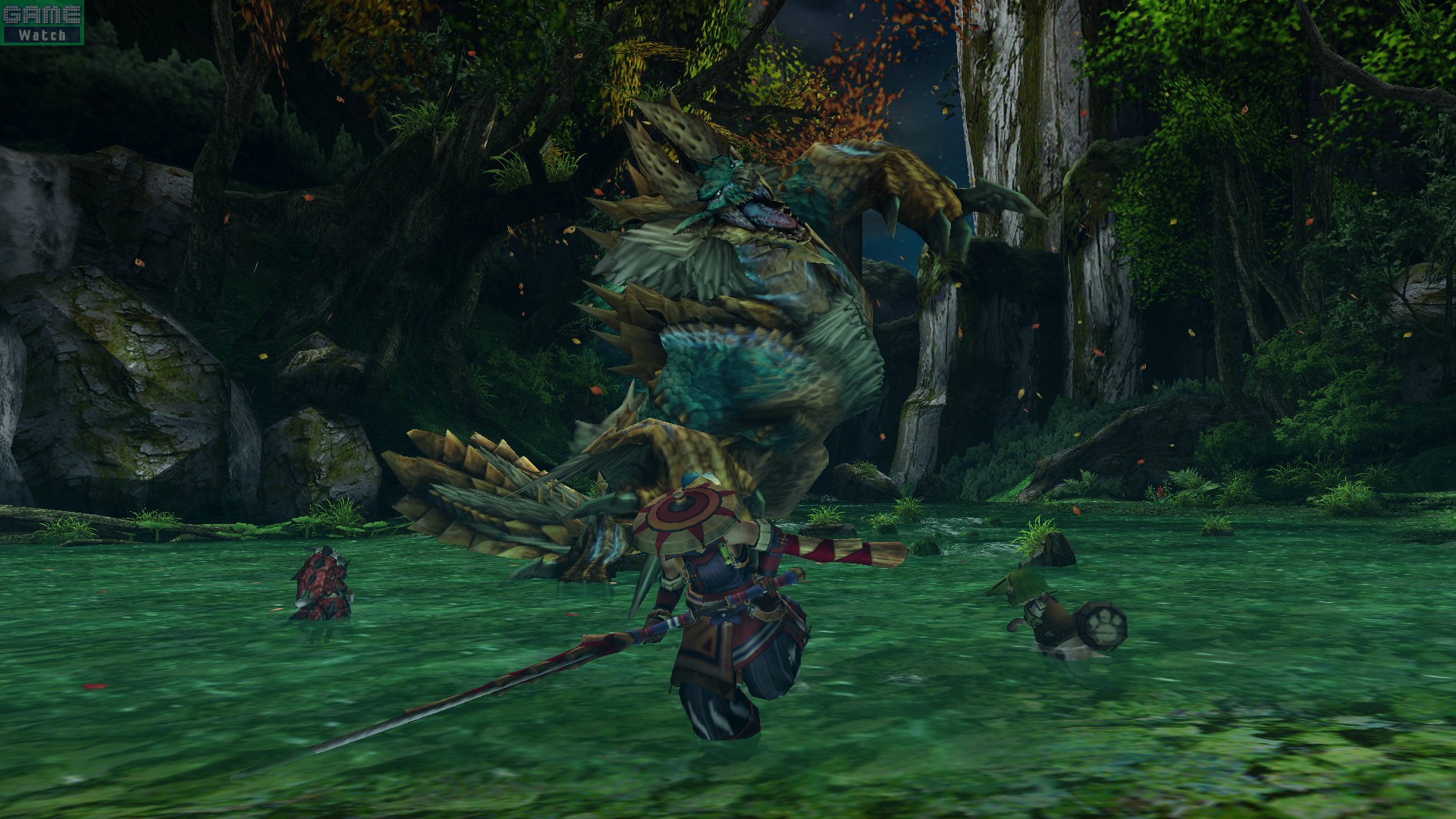 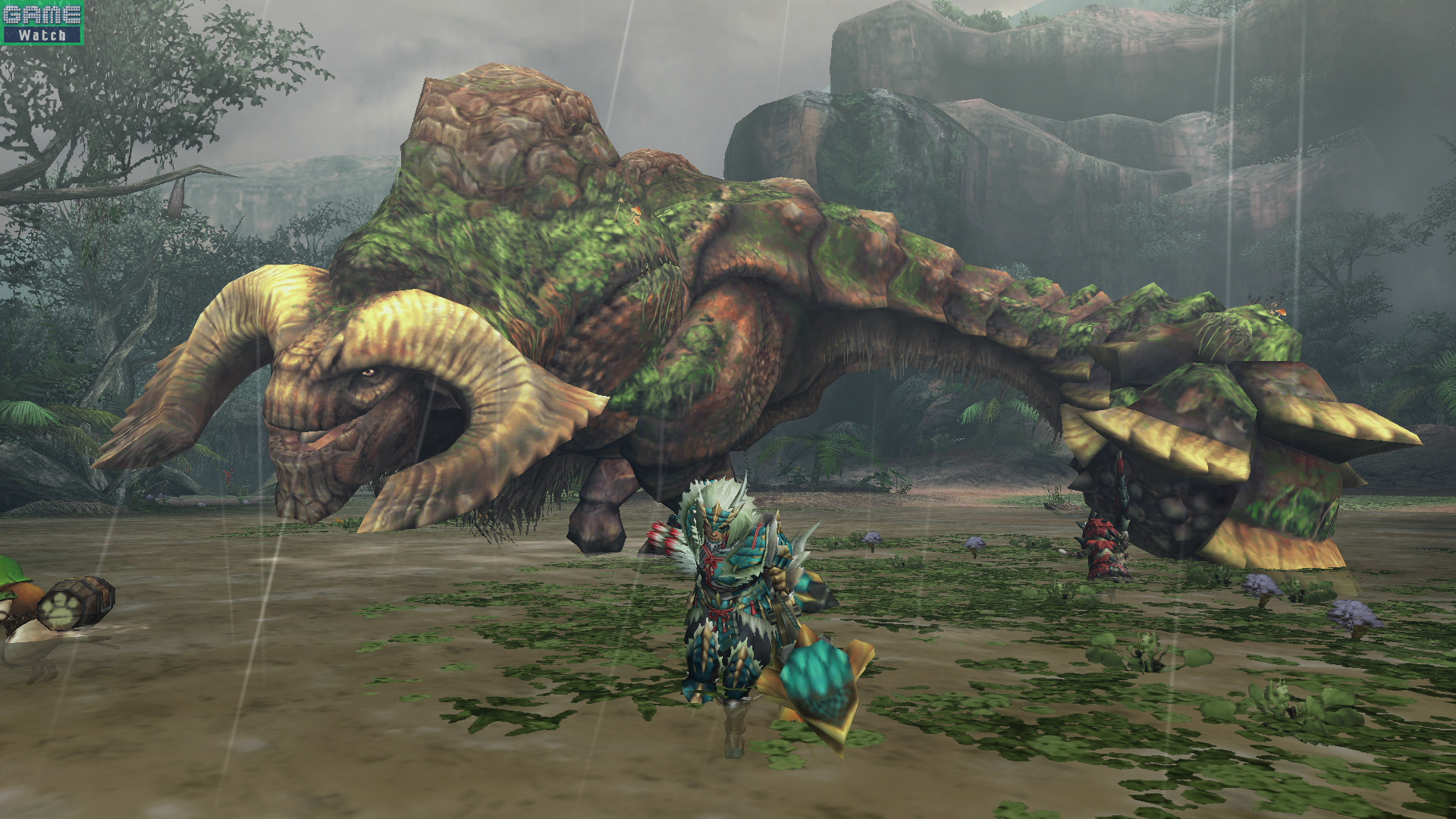 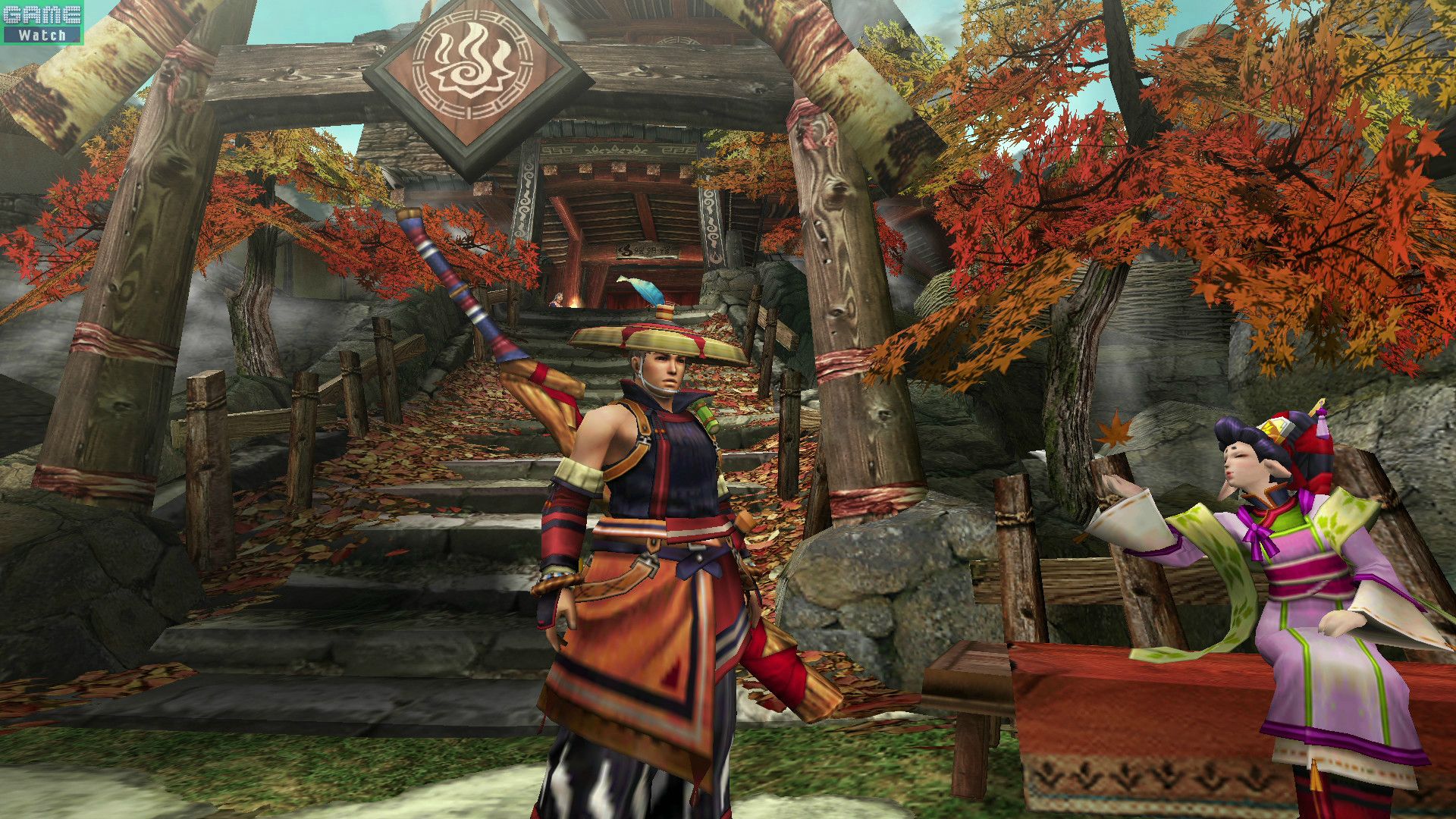 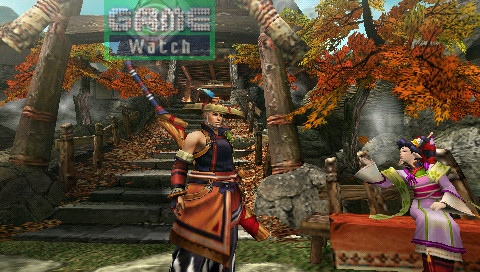 Hurray!!! I dont have to buy another PSP to play 3rd, now I get it in glorious HD (hopefully!)

Woo the ugly dithering is gone. I hope this will occur in all ports.
Z

Looks better than I thought. Good too see they added AA/MSAA or whatever to make it look clean compare to the PSP version.
S 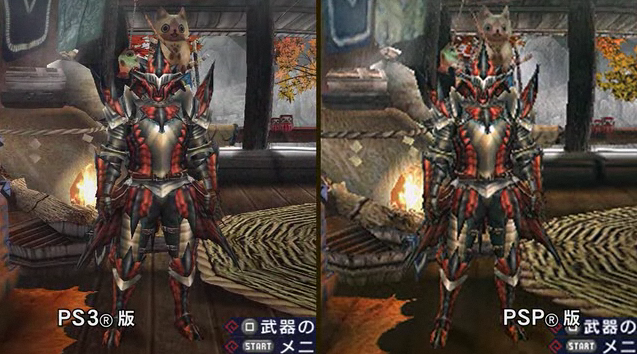 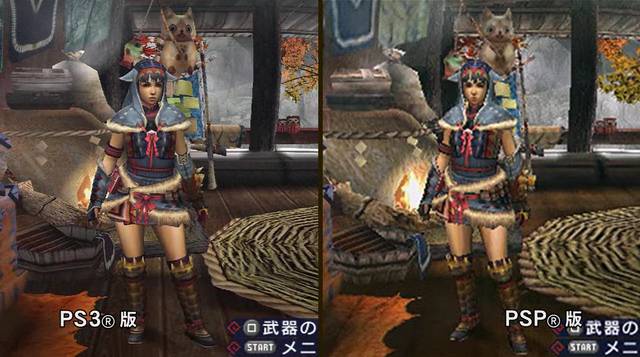 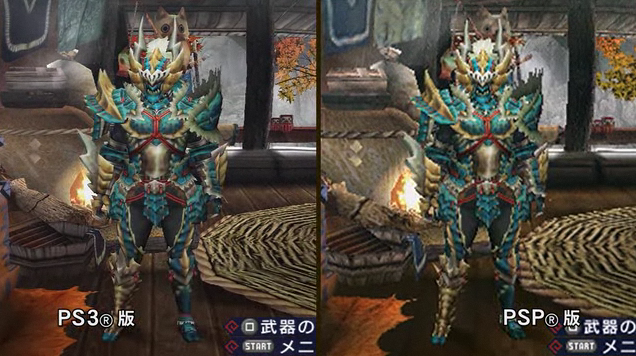 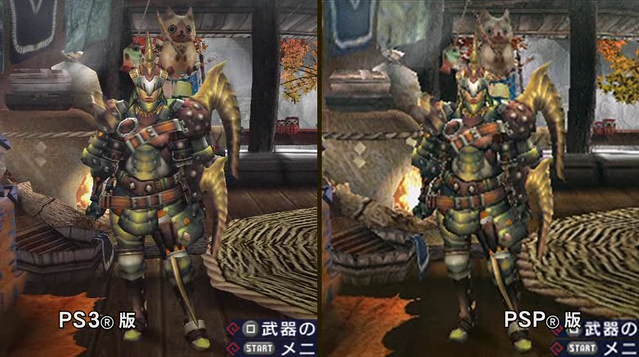 ZoddGutts said:
Looks better than I thought. Good too see they added AA/MSAA or whatever to make it look clean compare to the PSP version.
Click to expand...

Actually, if you look closely, there's no anti-aliasing in those screenshots.

It's just that at 1080p resolution, you don't get a lot of noticeable aliasing.
S

looks pretty boss to me
X

I agree. Of course I would prefer a real PS3 MonHun but this is probably the next best thing.
L

Looks like a PSP game in HD. I find it hilarious that MH3 is still the best looking game in the franchise.

Well here's to hoping Monster Hunter 4 is a Cafe, PS3 and PC multiplat* that finally makes use of MT-Framework.

*X360 excluded due to the fact Microsoft doesn't play nice when it comes to publisher owned servers and cross platform play.

They could at least add some AA, MLAA would be very easy and cheap to implement.
C

Nirolak said:
Actually, if you look closely, there's no anti-aliasing in those screenshots.

It's just that at 1080p resolution, you don't get a lot of noticeable aliasing.
Click to expand...

Hopefully this is why Sega held back from announcing VC3 for the US.
V

This sounds almost too good to be true. Especially the save compatability. Day 1 no doubt!
W

If this does not come out in the U.S. I will die.
S

This is awesome news!!!

Think this is import friendly? (not the language, but as in playable outside JPN)
S

Shakala said:
If this does not come out in the U.S. I will die.
Click to expand...

This makes me happy. Please bring it here.
J

Have you tried playing an untranslated MH game? It's not as easy as you'd think it'd be.

I will buy this, but they better not be expecting me to buy a NGP as well. I've already told myself I wouldn't, and that always works out as planned.
You must log in or register to reply here.