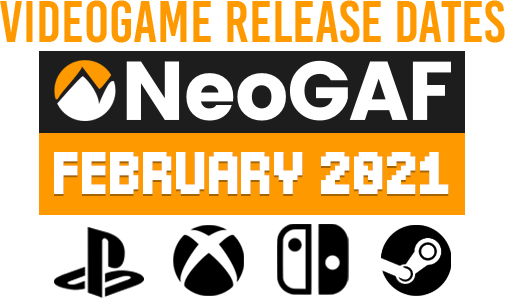 The prodigal son returns! After the dastardly defiance against the Evil Overlore I come to you stricken, but not defeated. After a month of introspection I bring good tidings and a very very late February release dates thread. If all goes well you should be seeing these on time in the future. As always please let me know if any dates are missing or are incorrect (dates are mostly based on the NA and EU regions and don't include Early Access titles).

I got Nioh 2 and Valheim myself this month (and a bunch of old shit to fill out my backlog such as Sniper Ghost Warrior Contracts, Call of the Sea, Bulletstorm Duke Edition, Wolfenstein Youngblood & Boomerang Fu) but what of you GAF?

I can't wait to play BD2

Only game I’m getting this February is Bravely Default 2.

Bravely Default 2 is the only game on the list i'm interested in.
April will be a good month with Humankind and Guilty Gear Strive.
Last edited: Feb 16, 2021
Reactions: VN1X

What a dreadful month

Nioh 2 and P5S here. Can't wait for March tho, a new Monster Hunter game will keep me more than busy.
Reactions: VN1X and Danjin44

TintoConCasera said:
Can't wait for March tho, a new Monster Hunter game will keep me more than busy.
Click to expand...

I hope Voyage turns out well.

Great month for Switch - Mario and Bravely Default 2. Persona 5 Strikers too, but I'll grab that to play on PS5.
Reactions: VN1X

I stopped myself at 30. Deleted the demo and never looked back.

Man I'm afraid of losing my job and friends because of this game.
Reactions: Danjin44

Just Valheim for me this month, still waiting on Humankind to come out.

I personally maintain that people who played and completed everything Nioh 2 are psychopaths.

Curse of the dead gods is great, buy it if you like roguelite and souls combat.

GymWolf said:
Curse of the dead gods is great, buy it if you like roguelite and souls combat.
Click to expand...

Yeah bought it over the Early Access period but still not touched it. I shall soon though! It looks really good.
Reactions: GymWolf
You must log in or register to reply here.