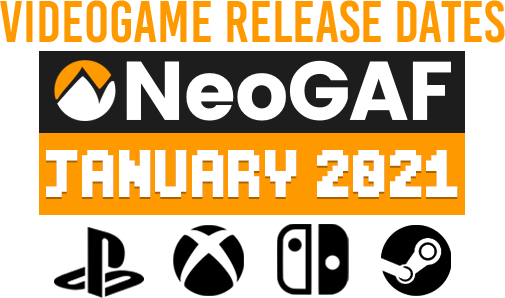 ​
Hey GAF! A bit late with the first one of these but here's a summary I made of all releases for the month of January in the year of our lord, 2021. Please let me know if any dates or platforms are incorrect so as not to misinform our fellow Gaffers (and inadvertently trigger an all out fanboy war). I don't think I'll pick up anything myself this month but if I were to spend my monies on anything I'd go with Gods Will Fall. I had completely forgotten about that game before making this thread but it's looking quite good with its mix of Dark Soulslike combat and colourful visuals.

Anything that tickles your fancy?

Good thread.
It should be pinned in the first page.

i will buy the medium and the yakuza collection.

i hope there will be a thread like this every month.
Reactions: Jethalal, JimmyRustler and VN1X

Hitman 3 is interesting but I think I'm going to wait for a deep discount. I played the bejesus out of Hitman and barely touched the sequel. While it's cool that Scott Pilgrim is getting a re-release, I just remember that game being hard as fuck and never really progressing in it. Maybe I was doing it wrong. Medium is pre-loaded thanks to GamePass.
Last edited: Jan 10, 2021
Reactions: Jethalal and VN1X

Scott Pilgrim is a good shout but I only wish it was on Steam and had online multiplayer/remote play. The woes of a PC gamer...

Will probably get it some time in the future on Switch though. Never really put much time in the original but loved the soundtrack heh.
Reactions: Jethalal and Tiamat2san

I have no games planned for this month, but Cyber Shadow looks interesting.
Reactions: Jethalal and TintoConCasera

Not the best of months, to be expected I guess. Time to tap into that backlog.
Reactions: Jethalal

I'll check out The Medium on pc gamepass. Other than that Iron conflict looks cool but I doubt I'll get it anytime soon. More time for Kiwami 2 this month!
Reactions: Jethalal
R

What a bleak month.

Only Hitman 3 for me on day 1, Scott Pilgrim maybe when it's on sale, Medium maybe when I'll buy an XSX a year or two years from now.
Reactions: Jethalal

Not a lot here. I'll probably play Ryza 2 eventually, but it looks exactly like the first.

I'm looking forward to checking out The Medium. It looks like it should be better than Blair Witch.
Reactions: Jethalal

Personally I'll try the next-gen upgrade for RIDE since I already have the game, and The Medium through Game Pass that looks pretty spooky and stylish. I still have a lot to finish from my end of year and black friday sales, so it's cool.
Reactions: Jethalal and VN1X

I'm probably going to be playing launch titles on my PS5 for a few months. I'm never hurting for things to play between the PS5, XSX, PC, and Switch so it's whatever.
Reactions: Jethalal and VN1X
J

Backlog month continues for me, with episode Cyberpunk 2077:curse of the Delamain phone call.
Reactions: Jethalal and VN1X

Not that I can buy it (no Series X purchase here in sight) but I am kinda interested in The Medium. Though I want to wait for reviews first given the lukewarm games Blooper made so far. Blair Witch was horribly boring.
Reactions: Jethalal and VN1X

JimmyRustler said:
Not that I can buy it (no Series X purchase here in sight) but I am kinda interested in The Medium. Though I want to wait for reviews first given the lukewarm games Blooper made so far. Blair Witch was horribly boring.
Click to expand...

I actually enjoyed Blair Witch more than any of their previous works, if only for the atmosphere. Looking back it did a lot of clever things in terms of hidden player agency (a bit too hidden as I got one of the bad endings for not realizing that game had an inventory lol) and other underlying mechanics. The last section was typical Bloober nonsense though what with its neverending, predictable and incredibly tedious teleport fest.

I'm hoping The Medium can at the very least be a decent Silent Hill-like without relying on cheap jumpscares or taking away control from the player.
Reactions: Jethalal

Hitman 3 is the game I'm most looking forward to all year. Hyped to get my hands on it. Scott Pilgrim is going to be my other pickup this month. Can't complain on my start to the year when it comes to releases.
Reactions: Jethalal

Thanks for making the thread. I always like to get an overview of what games are coming this month, to see if there's anything I had overlooked.
Reactions: VN1X
You must log in or register to reply here.