Even if this is a considerable visual upgrade I still believe it's a waste of NDs time and resources. When you can still access a remaster of a game on that platform do you really need a remake? That's the difference between this and demon souls , a console generation and many years

SLB1904 said:
Don't get me wrong the upgrade will be huge regardless it will look even better than tlous 2 that's for sure
Click to expand...

I’m thinking the multiplayer might be free, seeing as it was supposed to release 2 years ago with the original game.

But Sony will definitely bundle all 3 together for $70 lol.

This is the next “The Director’s Cut”.

Nah, there will be an upgrade for sure. Tlous 2 was an huge upgrade over Uncharted 4. I'm pretty sure it will have a nice texture bump. (I'm talking about the ps5 version btw)

SLB1904 said:
Nah, there will be an upgrade for sure. Tlous 2 was an huge upgrade over Uncharted 4. I'm pretty sure it will have a nice texture bump. (I'm talking about the ps5 version btw)
Click to expand...

I think TLOU2 will just get the same settings bump as the Uncharted Collection got. Same modes, etc.

The remake will look similar to TLOU2, but it won’t be able to have as impressive facial animation since they didn’t do full facial motion capture for the first game and they’re reusing the same performances. It’ll have to be fully hand animated. I’m sure it will look great, but I think most people will say the 2 games look fairly similar. That’s sorta the point.

The Eradicator said:
No way I'm buying this game for a third time. I've played it enough. The visual jump between the last generation isn't enough to make me buy these PS5 versions.
Click to expand...

Even if next gen upgrade includes CPU features such as physics and AI boost? I get it though. I never purchased the remaster so maybe that's why I'm hyped for it.

Chronicle said:
Absolutely. Honestly I don't think many give a shit about the remake. Where the fuck is factions 2?
Click to expand...

Included with this maybe?

I still think the rumour was about TLOU2 being redone for PS5, not TLOU1. It’ll be same way TLOU was redone for PS4, and now include MP, plus possibly some story changes.
J

I think it would make sense if they package Factions with TLOU Remake and sell it as one package.

ChiefDada said:
Even if next gen upgrade includes CPU features such as physics
Click to expand...

I'm not really interested in the remake.. I just want the multiplayer.

adamsapple said:
Hoping it gets a PS4 version too.
Click to expand... 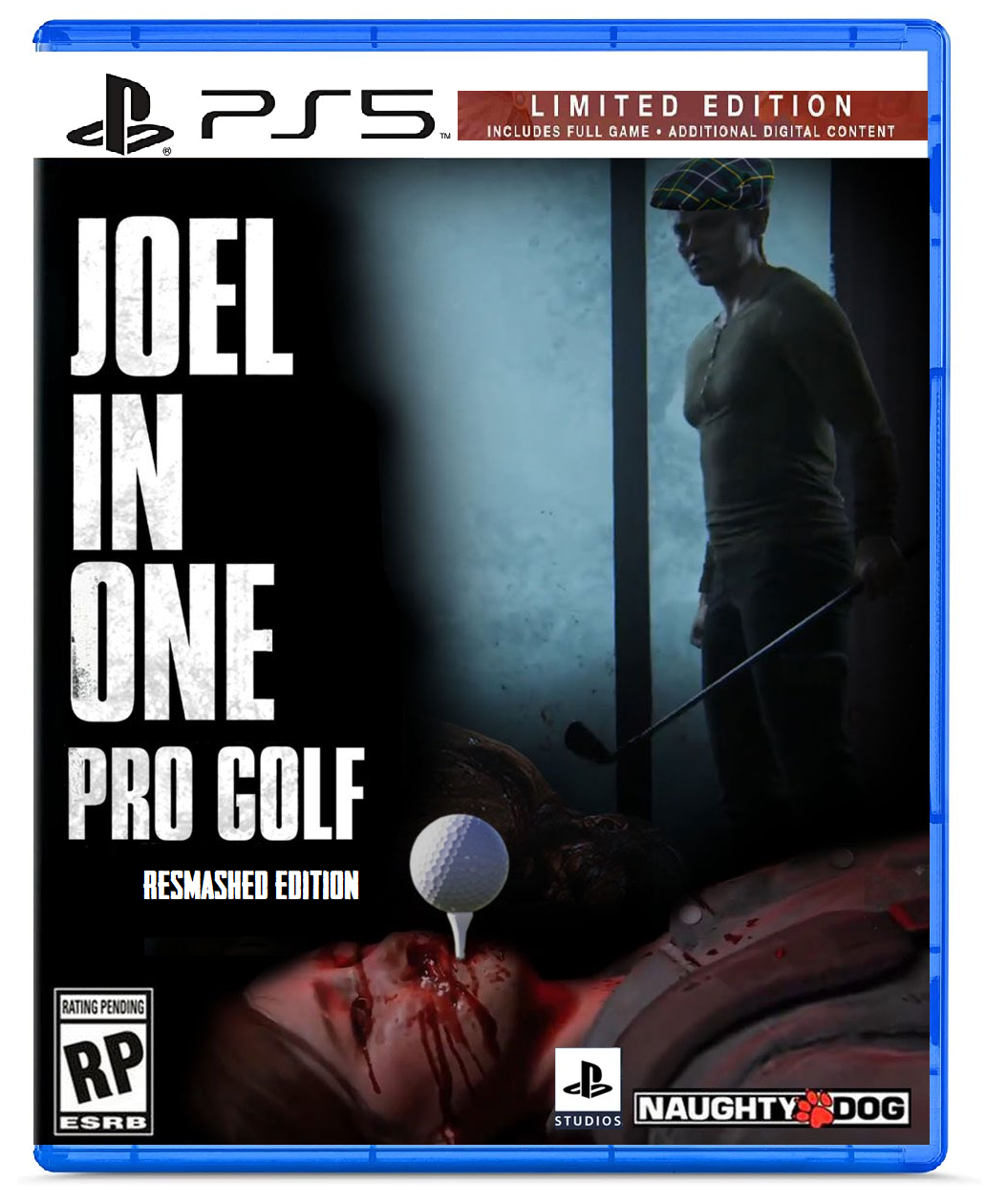 If it doesn't...who cares? Naughty Dog wasted like 2.5 years of dev time because their studio is horribly managed and didn't have another project to move onto.

Eh, too many remakes these days from the tripple a space. Are they cheaper?

Include a more proper update for TLOU2 plz

Flabagast said:
Most unnecessary release ever
Click to expand...

I suspect Naughty Dog will fuck around with the story/characters to be more inline with Part 2. More set up for what happens in 2. Also, Ellie will be given pronouns and Joel will be made to be less trustworthy cause hes an older white guy!

Paulxo87 said:
if it's indeed ps5 only it will replace ratchet as the best looking game available. Will be groundbreaking on a technical level. That much I am sure of
Click to expand...

Doubtful; it'll just use the TLOUII engine, with the TLOU assets re-made at that quality level. Will it look good? Sure. Will it break ground? Highly doubtful.

That's something. I thought the prevailing thought for years was some of ND back then was working on a Sci fi game/Savage Starlight comic series from TLOU games. Why didn't they have another project in dev or to move onto?

Yeah thats my concern, if this stupid remake cost us a new naughty dog game for most of the console generation. Like a if a new game takes five plus years to make, and nd has spent years exclusively on the last of us, that means we wont get anything brand new from them til at least the tail end of the generation
Last edited: May 19, 2022

It seems that no matter how many times people respond to the "why" question with because they're releasing on PC, a completely new platform, different way of playing (m/kb), higher (infinite) resolution, 360 hz, maybe nvidia Reflex, DLSS, better graphical fidelity - people just go ahead and completely ignore this and continue with the why's.

Replaying TLOU1 recently made me realize how much better TLOU2 is in terms of gameplay. A remake would put the gameplay aspect on the same level of the narrative & story.

This is probably one of those remakes that nobody asked for but it will sell gangbusters nonetheless. I will buy it day one and replay it despite the fact that I think Naughty Dogs time could be spent elsewhere. If Factions 2 is included It will be even more compelling.

They have 3 projects going on right now

This game will be the greatest technical thing to grace the next gen consoles, you can bet on that.

Man I'm not happy that they are doing this, the original Version is perfectly fine as it is and still looks fantastic.

Sony re-releasing TLOUS for the third time as a remake that no one asked for.

Meanwhile bloodborne is abandoned in the PS4 at 30fps.

I tried playing tlou remaster on ps5 a few weeks back and it does look pretty rough now. I'm in.

gundalf said:
Man I'm not happy that they are doing this, the original Version is perfectly fine as it is and still looks fantastic.
Click to expand...

The gameplay part has not aged well IMO, all encounters feel samey and unlike TLOU2 there’s little room for improvisation. You take out the majority of enemies with stealth in order to finish off the last ones with or without stealth, rinse and repeat. Also ”find raft to get Ellie across the water” is also pretty one note.

Sony good to us.

Still surprised about it, but I guess it was a decision by Sony because of the release of the TV Show.
TLOU isn't that old and was the absolute pinnacle of the PS3 generation and it still holds up well.

However the improvements TLOU2 made over TLOU1 are massive. Especially in the control, accessibility and gameplay aspects of the game.
And one can just imagine (I did not watch the UE5 TLOU Remake fan recreation video on purpose. Those videos can harm your expectations of future games and graphic development, because they are barebones eye candy and nothing else) what Naughty Dog can pull off there. If they put in the effort it needs and it is a PS5 exclusive the game will look absolutely stunning. Hard to imagine even better graphics than TLOU2.

I also understand the other side that says it is too soon, they were happy with 2013 TLOU and don't consider buying the remake because they already experienced the story, but for me this is a Day1. (Though I expect them to change a few tiny things here and there to fit in with the overall story of Abby and her father and maybe even some elements that are in the show. I am just speculating here).

I would have thought this would release alongside Factions 2’s timing. Maybe this is separate or Factions 2 is coming along. I expect they are taking this opportunity to bring this for a PC release, hopefully close to launch. That would make a bit more sense to reach a wider audience for the franchise at this point.

Did we need a last of us remake? Probably not.

Will I play it? definitely yes!

After it already being remastered, I personally don't feel like I'd care for this much at all, unless there's something ABSOLUTELY amazing about it. I still feel like it's not even THAT old and still looks pretty damn good.
N

I expect this this year, as well as wind waker and twilight princess

just_like_that said:
how often do we see a game having a remake after a remaster? lol
Click to expand...

I think SotC had a remaster and a remake?

The hat's a nice touch.

I have only a morbid curiosity over this remake, the idea of remaking TLoU is beyond awful.
Last edited: May 19, 2022

Oh, a remake of a game I already played twice.

Why? They can change a feel things on the first one to fit the sequel.

I mean, they change the doctor of the first one to meet the lore of the part two.

There are also a speculation of the remake be like the TV show with the capture actors from the TV as well. Nothing confirmed.

Who knows... Totally unecessary imo. They could wasted their resources on a new IP.
S

I will buy it and continue to pretend it's a one off game.

I don't know if I have another playthrough in me

Last of us makes other games look mediocre.

I started watching a playthrough of TLOU last week, got two hours in and I'm very underwhelmed and bored, going to keep going until the end though, the environments look terrible imo though, big and boxy and game-y looking. I went back to see what Uncharted 3 looked like in this regard and its way better, they look more like real spaces, I do acknowledge that they had to create more spaces in TLOU though, you move through areas a lot faster than UC3. So

The game also looks wrong as fuck at 60fps, it looks very soap opera-y during cutscenes and especially in-game it looks like fucking Benny Hill sometimes, its bizarre.

Well, insta-buy for me.
It would be amazing.

Wildebeest replied
May 14, 2022
The Last of Us Part 1 Remake is not a "cash grab", says developer
Opinion Game Dev