Pathea Games have launched a Kickstarter campaign for the follow-up

My Time at Portia is getting a sequel with My Time at Sandrock, developer Pathea Games has announced.

The Chinese indie developer has launched a Kickstarter campaign for its upcoming follow-up to the farming life sim that released last year. Set in the "rugged mining town of Sandrock", the sequel will see you build up a new workshop and help the struggling town in an all new adventure that builds on the foundations of My Time at Portia, with new gameplay features and a new story arc.

You play as a builder who's recruited to work in Sandrock. When you arrive in the town, it's in a "sorry state", with run-down shops, empty buildings, and residents who want to leave. You have to set out to use your building know-how and skills to unite the townsfolk and help Sandrock prosper once again. With an open-world setting just like My Time at Portia, you'll be able to gather materials and explore "deep canyons, vast deserts, endless salt plains, breathtaking ruins, and more".

"First, Sandrock will have a similar pathos to My Time at Portia, but offer a completely new experience with new types of gameplay," Pathea Games says on its Kickstarter page. "We're still aiming for a Miyazaki-inspired kind of world, but with a few other surprises thrown in… Second, we wanted to have the overall story arc be more satisfying, but also with more focus on individual NPC."

Pathea also details that My Time at Sandrock will have dedicated single-player for the RPG experience, along with a multiplayer "special mode" where friends or strangers can play together. And just like My Time at Portia, you'll once again be able to develop romantic relationships with the residents of Sandrock, but this time around all of the characters are set to be more interactive.

Almost all NPCs will also have character-specific questlines and their own unique personalities. Initially, there will be fewer romanceable characters, but Pathea says it's working to make each one unique with personalized quests.

"The relationships are, once again, more than just something extra to do in the game; they're tied together with the overall game loop: if you have a good relationship with a specific character, you'll unlock perks such as new missions, stat boots, cheaper goods, or a more willing hand to help out when you need it. Going the romance route will allow you to go on dates with the NPC, and eventually, you'll be able to marry the character and have kids."

Released back in 2019, My Time at Portia was a great addition to the farming life sim genre that's reminiscent of games like Stardew Valley and Harvest Moon. There's no release date for the upcoming sequel just yet, but it looks set to deliver another adventure with more features and improvements.

I put more time into Portia than I'd admit to in respectable company.
Reactions: Ailynn

Torrent of Pork said:
I put more time into Portia than I'd admit to in respectable company.
Click to expand...

I wanted to like it, I tried to play it multiple times but it just felt "Slow" for me. Slower than older harvest moons even.

YES!! Thank you for the heads-up,

My roommate will be so excited! She absolutely loves the first game, and I was amazed with the amount of content in the game.
Last edited: Oct 26, 2020
Reactions: Bullet Club

"And become a legend"

Also, what happened to having no combat in these types of games (like Friends of Mineral Town)?
It kinda ruins it for me.
Last edited: Oct 26, 2020
Reactions: Bwesh

Nope. My time at Portia and Stardew Valley are forbidden games for me. I get addicted and can't stop playing them and end up doing no housework or chores.
Had to delete them from my ps4.
Reactions: Ailynn

I really enjoy My Time at Portia. My first Q for this game is will they add in multiplayer? The answer is Yes and I like the western aesthetic over a ruined modern-futurist town.

I should play the first game, I tried it briefly and got "this is quality" vibes from it.
Then I started playing warframe or some roguelike and it slipped from my attention.

or you can just read below:

As most of you know by now, the world of Portia and Sandrock went through a little war about 330 years before the current in-game date, resulting in the Day of Calamity. Before the Day of Calamity, human technology was at its height: people lived in luxury, robots did most of the work, ships carried men to the stars… Scientists were able to crystalize energy into power stones that powered nearly everything: think of them as more powerful and longer lasting batteries. This earliest period in recalled history is now known as the Age of Corruption.

During the Day of Calamity, men used advanced weaponry of enormous power in a war that engulfed the planet and beyond. The results were devastating. Records show entire continents vanished; chemical and biological weapons created new biomes and new species; the human population fell dramatically; the AI machines became uncontrolled; entire cities were buried; but most prominently: the sky darkened for the next two hundred years. This time period is now called the Age of Darkness.

During the Age of Darkness, the vast majority of the human population lived underground. In the darkness, they faced starvation, loneliness, civil war, and even mutant monsters that lurked about in the tunnels. They were not able to produce crops above ground, as the world was trapped in a perpetual nuclear winter. Throughout the two hundred plus years, new countries were formed underground. New religions were also formed, such as the Church of the Light, who at the time predicted a savior would appear to bring light back to the world.

As the Age of Darkness continued, industrial production grinded to a halt. Most of the knowledge developed from the old world was lost or forgotten. People begin to “ruin dive” to search for working condition machinery from the old structures. The Ruin Divers had to brave many dangers to get these items, thus gaining the respect of the population. At the same time, a profession called the Builders begin to arise. These people helped put the items from the ruin divers together into working machines. Over time, these two professions melted together somewhat.

About 100 years ago (98 years in game time), a man named J. Peach built a machine that tore a hole in the clouds, bringing light back to the world. Peach was a resident in the ruins under what is modern day Ethea. The machine he used has been lost to history, but record has it that he used it in several places before it broke down. The light brought about by Peach gave hope to the masses; they believed the day when they could once again live under the sun was not far off. The event of Peach’s machine tearing a hole in the clouds is celebrated today in the form of the Day of the Bright Sun. People call this Year 0 on the Peach Calendar (it’s currently Year 98).

After Peach’s achievement, the clouds thinned and gradually parted over the next 30 years. Most people started living above around again during this time. Some kept their underground affiliations, such as the nations of Seesai, Ethea, Barnarock, and Duvos. The followers of the Church of the Light formed their own country in Meidi. Some ruin divers and settlers from Ethea and Barnarock set off south to form what is known today as the Alliance of Free Cities. 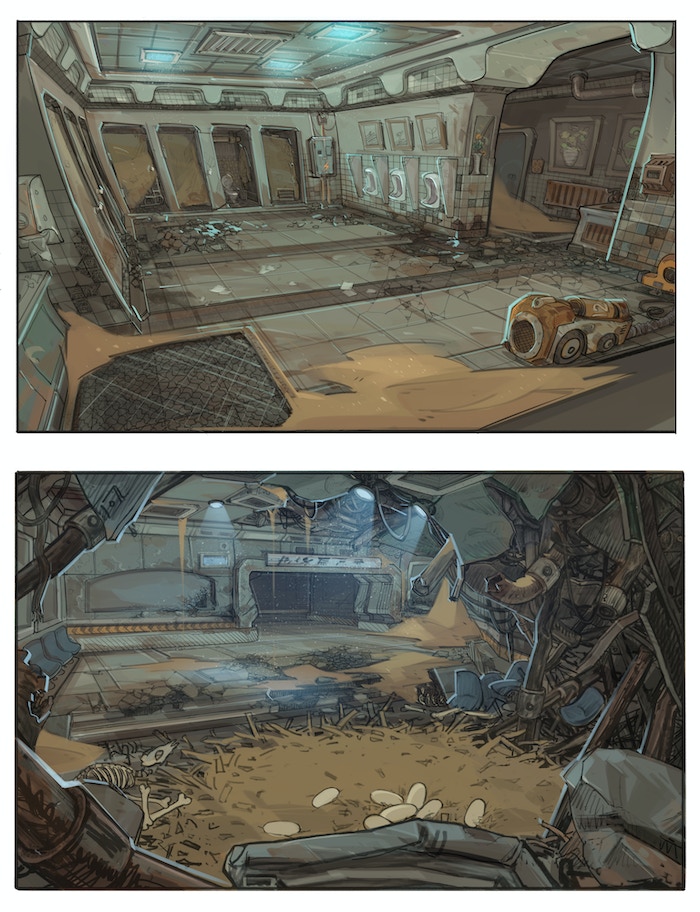 This update is just to share with you some of the experiences we’ve had while doing research for My Time at Sandrock. We took a trip to the Gobi Desert, where we spent long days packing in as much as possible: climbing mountains, riding camels, meeting plenty of interesting characters, and now we’re ready to tell you about some of our adventures!


One of the things we love to do in our games is trying to get little details correct in order to maximize immersion; when it comes to world-building, there’s only so much you can get even from the most scouring of search engine usage, so we wanted to actually go to the desert and experience it for ourselves.

Each of our team members had something to learn from on the trip: our artists, of course, had no shortage of scenery to analyze, as well as close up looks with man-made structures and brushes with nature that we believe will help inspire and improve the overall aesthetic of our game.

Our designers were able to see the tamers of the desert in action and take note of tasks needed to survive in this harsh climate: we learned about desert planting, travel, and all the specific constructions the people there use to keep things hospitable, among other things.

Our storywriters were able to speak with locals young and old to learn about their daily life and history. They told us proud tales of their heritage, but also harrowing tales of famine and economic ruin caused by rampant sandstorms and drought.

We did manage to have a bit of fun while we were out there, though: we tried some local dishes, went sand-sledding… we even went to a literal bandit dungeon from a thousand years ago that had more twists and traps than we’ve seen in most imagined game dungeons! Luckily, we managed to avoid the spike pits, blades in the wall, falling boulders, etc. …

The experiences we had and stories we could tell are far too many to document in a single article; suffice to say, we’ve learned a ton of things that we’re extremely excited to start working into our development process, and we’re confident that our time in the Gobi Desert will make your time in Sandrock just that much more enjoyable.

Thanks for reading and stay tuned for more updates!

Source: Sandrock on Kickstarter
You must log in or register to reply here.

Feb 6, 2021 started Bullet Club
Feb 6, 2021
SlimeGooGoo
Next Gen Fighters who do you think will go first and what do you expect