Recap episode that went through everything up to this point. There's only 4 episodes left, so I'm guessing this is to hype up the final battles coming.
M

They weren't running out of steam they were holding back. Absolutely amazing episode, hype from the second the OP ended. Lot's of interesting shots throughout and breakneck pacing from start to finish.

Oh, it on mechanical beast Ashura. His robot is still half man/woman lol. This battle is gonna get intense. Also looks like were getting a little Kiuji x Sayaka shipping going on now, lol. 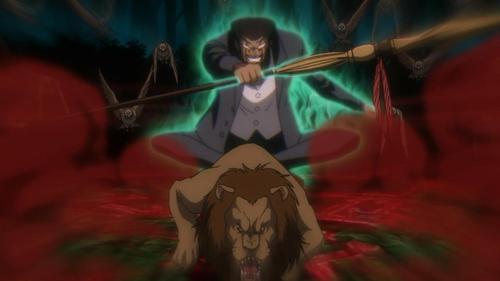 Well, the enemies have the upper hand now as they completely overpower the Kurogame house. Kouji is getting spanked by the numberless mechanical beasts and even Sayaka is getting knocked around a bit... All that craziness is clashing all at once in this final battle. 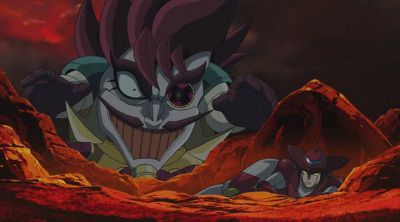 Ah! the twists, the turns, too many changes in the tide of battle and too many reveals!

Love how the music kicked in during the last change in battle when the new Mazinger army fought back.. good stuff.

However, Nintendoman is going to hear it, because there was a pervy tentacle rape scene in Mazingeras well.... And he gives SAO a hard time, lol.

I'm just messing, the craziness isn't over yet because that reveal at the end.... OH my, what will happen now!
N

Can't wait for your reaction after the finale
M

"We're characters who exist to get beaten, that makes us invincible" - Boss (also dat blast off)

Not gonna lie I was a little happy when B Team died, and a little sad when they didn't. All the stuff that carried over from ep 1 was still awesome Pygman, Big Bang Punching the Ghoul and crashing it into Ashura's fortress. Kenzo's and Hell King's reveal at the end was great.
M

Somehow this is all B Teams fault.

Absolutely amazing. They should have sent a poet.


So many twists. Dr Hell is a supreme dick and the worst savior of humanity ever. Love that they went with the 'bad end'. That first rocket punch plinking off of Hell King made me giggle.
Gonna re-watch the 1st ep and then try to put together a series impression post.

Short version is - I really enjoyed watching Mazinger Z and would definitely recommend to fans of giant robots and shonen.
M


That's slightly more hopeful then the end of ep 26 suggested, I like that they still left it open ended though. Everything past the title card was pure misdirection.
Mazinger Z: The Impact (Ep 1-26)

Music - Solid throughout and at times exceptional, frames the action and mood of the show perfectly. OPs and EDs are all solid and used to good effect as highlights as well.

Visuals - Animation is low-key but used to good effect throughout. I thought there were a multitude of creative shots and interesting perspectives used to keep the show visually interesting throughout. Felt that the show handled scale very well. Mecha design was extremely varied.

Action - 'The Impact' says it all, battles are rarely drawn out and generally decided very quickly, which is actually kind of refreshing. Only downside was that we had a lot of cool looking mechas that basically showed up and got blown up immediately.

Favorite Character - Boss. I thought he would be obnoxious throughout after his intro but he really grew on me over the series. Guy has a lot of heart. (Honorable Mention: Kurogane 5 - spinoff please)

Overall - A bit of a slow start and a couple of minor lulls at points but largely non-stop over the top action that doesn't take itself too seriously. Super enjoyable. 95/100 Rocket Punches

Did not see that one coming! The heroes out smarted the villians... wait, no? The crazy twists and turns along the way made that one impossible to predict. Overall, the shaw was definately up there on a pure "entertaimment" level, but it was just pire insanity along the way with over-the-top characters and story elements.

Not a bad watch at all.