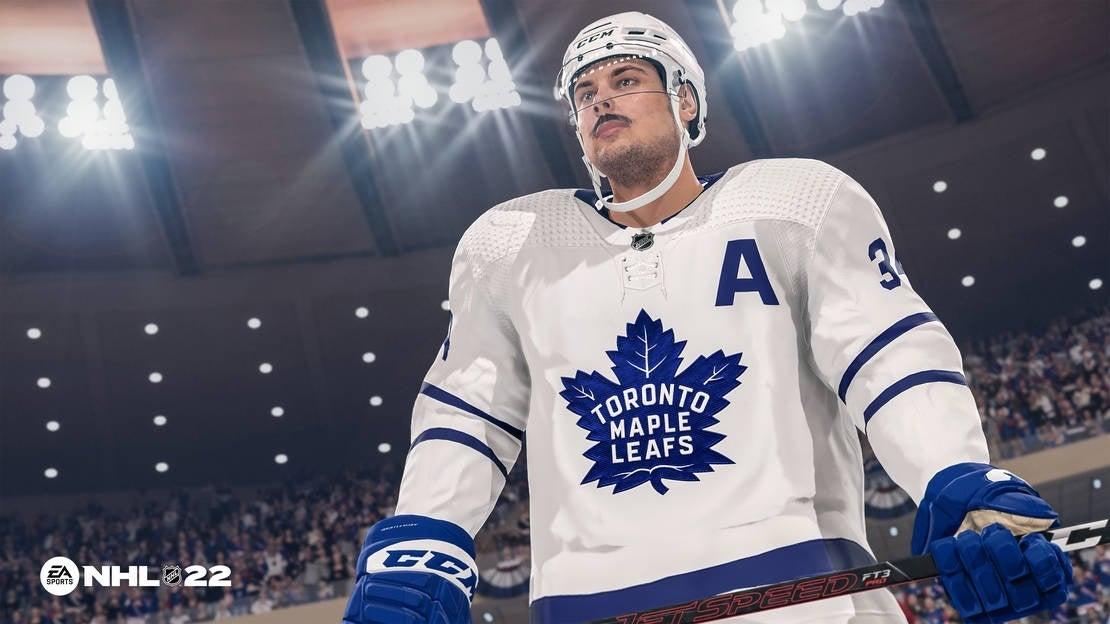 Joining its FIFA and Madden counterparts over at EA Sports, the long-running NHL video game [...]


Toronto Maple Leafs star Austin Matthews will be on the cover of NHL 22, which may come as a surprise to some fans, considering he was on the cover of NHL 20 just a couple of years ago. But Matthews' abilities on the ice have set him apart, and he'll once again be front-and-center for the new game.

NHL 22 is going to be released on October 15th, around the same time that other games in the series have been made available in their respective years. The new edition will be launched on PlayStation 4, PlayStation 5, Xbox One, and Xbox One X|S at the same time.

"I'm thrilled to be working with EA Sports again and returning to the ice in NHL 22," Matthews said in a statement. "This year, Superstar X-Factors bring a whole new level of elite competition and strategy to the game, and you'll be able to unleash my 'Shock and Awe' ability for exciting shots at the net.

In addition to utilizing the Frostbite engine, which will make the game look and feel better than ever (especially when combined with next-gen technology), NHL 22 will be debuting the Superstar X-Factors feature, a game-changing system that helps make each of the sport's biggest stars feel unique on the ice.

Looks good to me!

Although it is funny that EA has resorted to recycling cover athletes
Last edited: Aug 19, 2021

I've been waiting years for them to switch to Frostbite. It's been promised for so long.

Hopefully the first version isn't as feature gutted as NHL 15 was when it launched for "next gen" (PS4/ONE) consoles.
Reactions: Hero of Spielberg

Who do you think deserves an X-Factor?

Unbelievable that these games aren't on pc yet.
Last edited: Sep 15, 2021
Reactions: ChoosableOne, zcaa0g, Hero of Spielberg and 1 other person

llOswaldll said:
Unbelievable that these games aren't on pc yet.
Click to expand...

They used to be, I don't understand why they stopped bringing them over.
Reactions: Hero of Spielberg
R

llOswaldll said:
Unbelievable that these games aren't on pc yet.
Click to expand...

I would pay full price for this. Fuck off EA.
Reactions: ChoosableOne and zcaa0g

Why the fuck is this game not on PC?
Reactions: SantaC and ChoosableOne

Catphish said:
Why the fuck is this game not on PC?
Click to expand...

I've said it before in the Madden topic where it was revealed that this year's PC version would be based on last year's game, but I really think they purposely mostly avoid PC for sports games because of mods.

Being able to customize the games, change rosters and players etc...on your own is probably scary to EA who wants full control. It undermines their DLCs as well.
Reactions: Panajev2001a and Longcat

Hockey’s biggest stars react to their EA SPORTS NHL 22 ratings, and some even learn which of the all-new Superstar X-Factors were inspired by their playing style and signature moves. Some are stoked, some feel good about their ratings, and a few are ready to prove us wrong. See reactions from players like Patrick Kane, Jack Hughes, and Steven Stamkos think about their ratings and check out NHL 22 today!

Powered by Frostbite™, EA SPORTS™ NHL® 22 is as much of a superstar as the players on the ice in the most realistic hockey gaming experience yet. For the first time ever, experience hockey on one of the industry’s most powerful game engines, bringing unrivaled visual detail to every hit, deke, and shot.

Superstar X-Factors lets you feel the personality and power of NHL superstars with an all-new ability system that unlocks the unique skills of the league’s most elite players. Authentic to real player skill and style, the stars of the NHL truly come to life in NHL 22, making their time on the ice more influential than ever.
Click to expand...

Catphish said:
Why the fuck is this game not on PC?
Click to expand...

Not saying you’re wrong, but that makes no sense to me.

It was developed on PC. The work is done. Throw it on Origin with Madden and FIFA.

Surely it wouldn’t take many sales to recoup whatever costs are involved there.

No, there’s got to be something else going on.
E

The players have gimmicky special moves now? Auto sauce on the pass for, was it Josi? Not a fan. Reminds me of one of the previous NHLs when you had snipers, big hitters, etc. Just made that particular attribute for that player too powerful, and games felt less dynamic. Not really digging the direction of this game the last few years, and not even close to something I'd pay anywhere close to full price on. Especially at $70 LOL!

Still not on PC? Guess I'm still not buying it then.

NHL: "You know, EA, we were about to sliiiightly modify our contract and ask you a billion dollars every four years from now on for the NHL™ license..."

The game plays beautifully and looks great on XSEX, but a bit disappointed that there seems to be absolutely no changes to Be A Pro mode.

I played the trial on Series X.

Was decent. Best NHL game I played in years just dabbling with Season Mode. It played smooth (even the replays). The AI still moves and passes with god cheats, but wasnt as bad. I was able to actually knock down the AI players on their asses easy and I didn't even bother adjusting any sliders. Very good presentation look too.

Biggest problem I had is the fonts are either super small (literally unreadable on my 65" tv), or the fonts were bigger but so thin with its colours blending into the grey background it was hard as hell to make out words and names.

Catphish said:
Not saying you’re wrong, but that makes no sense to me.

It was developed on PC. The work is done. Throw it on Origin with Madden and FIFA.

Surely it wouldn’t take many sales to recoup whatever costs are involved there.

No, there’s got to be something else going on.
Click to expand...

NFL 22 delivers some good moment-to-moment hockey along with a needed visual upgrade, but the franchise feels tired and worn out.
Click to expand...