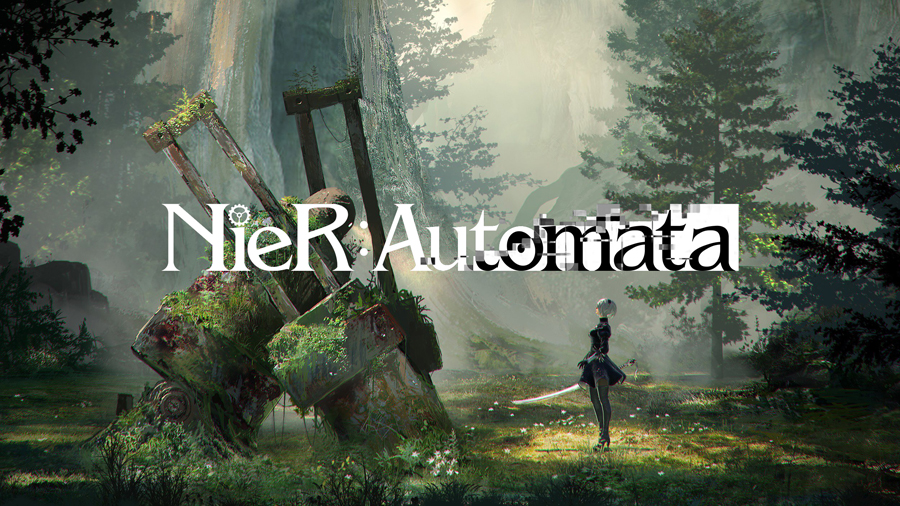 In the footsteps of the amazing Yakuza 0 and Gravity Rush 2 threads, I've decided to take it upon myself to see if we can't throw more money at this guy. (You know which one I'm talking about) With only around a month left before release, and hot on the tails of it going gold, NieR: Automata is still unfortunately flying under a lot of radars, and that's a damn shame.

So let's fix that, shall we?

Invaders from another world attack without warning, unleashing a new type of threat: weapons known as ”machine lifeforms." In the face of this insurmountable threat, mankind is driven from Earth and takes refuge on the Moon.

The Council of Humanity organizes a resistance of android soldiers in an effort to take back their planet. To break the deadlock, the Resistance deploys a new unit of android infantry: YoRHa.

In the forsaken wasteland below, the war between the machines and the androids rages on. A war that is soon to unveil the long-forgotten truth of this world...
Click to expand...

Sadly overlooked as one of the hidden gems of last generation, the original NieR released 7 years ago and told a story about a man trying to save his daughter from a seemingly incurable disease. Though it didn't release to critical acclaim, it resonated with many passionate fans who praise its story and music to this day. Directed by none other than Yoko Taro - yes, this guy - it shunned expectations and left a mark all its own, combining genres and shocking players with its raw storytelling. (Text Adventure Pun Intended)​
What is NieR: Automata?

Though you don't need to have played the original NieR to enjoy it, NieR Automata takes place thousands of years after Ending E of the original and is an "Open World Action RPG" in the same vein - though this time, Yoko Taro & his crew have backup from some of the best action game developers in the world: Platinum Games, and combined with the immense freedom given to the project, it seems like we're in for a treat.​
What if I want to play the original first?

If that's what you want to do, you should take a look at Amazon for your country, or a local game store to see if they have any used copies. Otherwise, you should do just fine catching up to speed with either - or both - of these:

Okay okay, but why should I buy NieR: Automata?

I could just say it's to give this guy more money & more chances to get his crazy stories out there and be done with it - but that wouldn't be giving it enough credit. Oh no - there's so much more going on here that I almost don't know where to get started. Here goes: 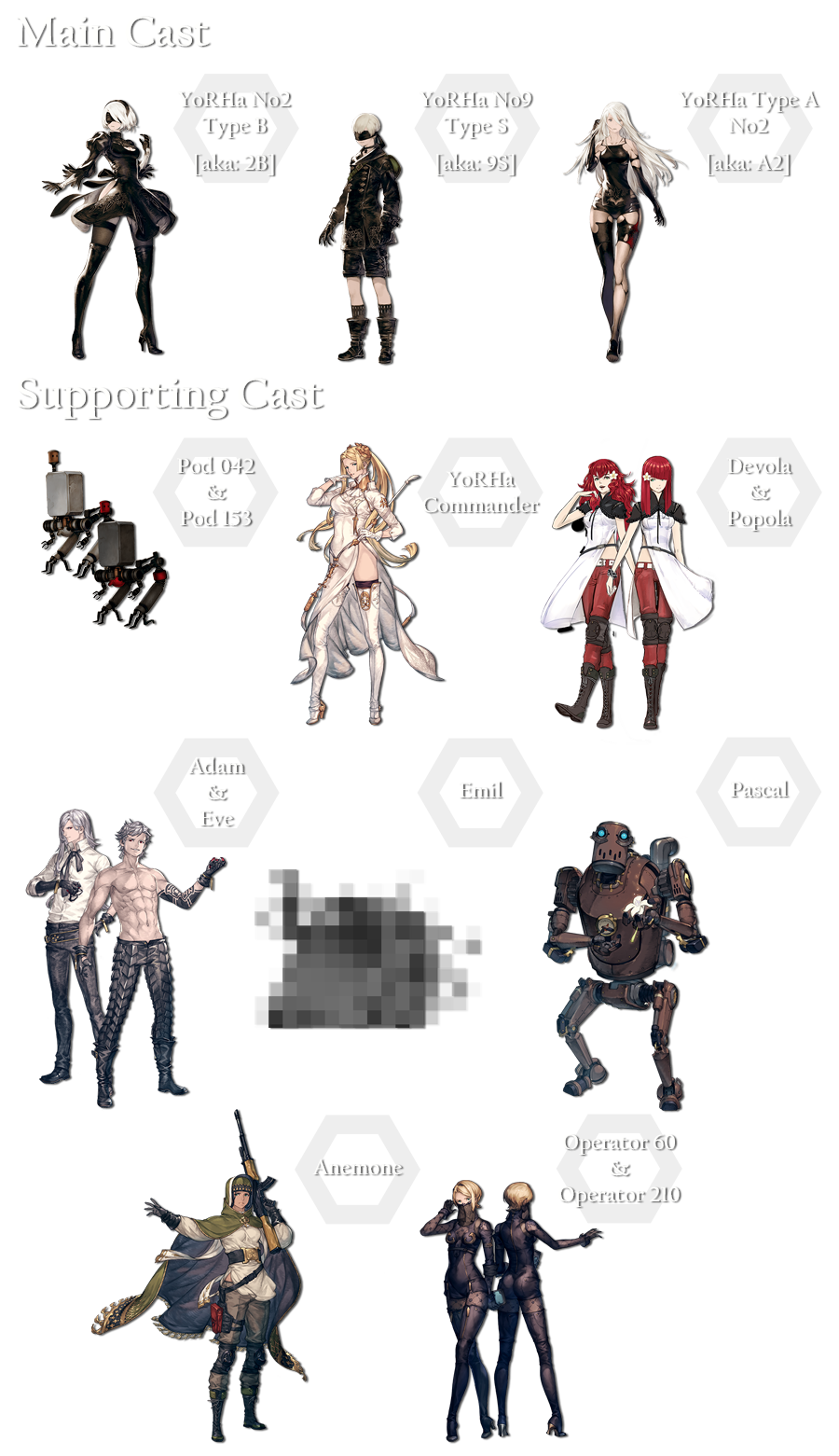 Great, glad to hear it! Here are some links to help you find the game in Canada, America, or the EU/UK.*
(*If there are other big stores/territories not included, please let me know)​
X

I'm already waiting in line in front of my local gamestore.
E

no its stacked between so much fucking releases i don't think so. + its platnium games, will bomba price drop very quick ..
K

Fantastic thread and yes I'm going to buy it. I already love Platinum games and Yoko Taro is a precious man I wish to protect.
T

This thread is beautiful.
F

Depends on when PC version is coming. If it's not close to March and it's gonna be while I'll bite the bullet and get it on PS4.

But I'm extremely excited for it of course

when its out on pc yes
L

I love that this seems to be a trend now.

And somebody bring some GIFs in here!
D


And OST.
Really want that Steelbook, but it's too pricey; will settle for the regular copy :/
B

Joyful said:
when its out on pc yes
Click to expand...

It's been on the top of my list since the reveal.

I'm not missing out on what'll probably be the most fun set of combat mechanics of the year for me. It's close to BoTW, but dammit, it's a Platinum game and I can't miss those.
H

I want to, but I'm not sure how much free time I'll have before summer and I'm more interested in Horizon. Will pick it up eventually though.
K

I really want everyone to know how much more Titanfall 2 sold than Nioh. It was a staggering amount.

No, I am not an anime boy.
Frankly I watched a few streams but found the streamers always focus on 2B's pantsu and performed very...hentai.
Make I doubt the quality of this game.
M

Yes, I'll vote with my wallet. The industry needs more of this.
S

I know almost nothing about it but what I've seen and heard sounds interesting. I like the aesthetic a lot.
C

Whenever they deign us PC plebs worthy of a release date instead of kinda just ignoring the version's existence, sure.
S

Definitely buying it, one of the final things that pushed me to get a PS4. Money's a bit tight so I had to decide what to buy on release, and this was one of the three I chose (the other two being Yakuza 0 and Persona 5).

I can't wait. And to think just a year ago all I knew about Nier was "its related to that dragon game, right? What was it...Panzer Dragoon?"


Thank you so much, Pat and Liam, for doing an LP of Nier and getting me into it
Also good that you included Clemps' video analysis of the previous game and Drakengards. Very useful.
O

I bought Drakengard 3 day one and didn't regret it. I will get this day one if I can. Zelda will take up a lot of time.
M

Its a stop everyrhing, top priority kind of game for me.
D

When we get PC release date.
C

Already have the Collector's Edition pre-ordered at the SE store.
J

Yes but im going to wait and see between the PC version and the PS4 version.

With Steam I sometimes get regional pricing and with stronger PC hardware oftentimes it makes it a no brainer!

I never thought we'd be fortunate enough to get another Yoko Taro game, never mind an actual NieR title.

And yet here we are in this strange world.

As far as I'm concerned, this game existing is miracle-tier.
D

There's too much that is releasing around it. $29.99 is my price point.

I'm buying it on PC but mostly because it's a Platinum game, not so much that it's a sequel to Nier.

If it was the same team behind the first one I probably wouldn't care.
C

Not on console. Quality of the PC port will probably be a big factor on when I pick it up.
T

Yes, yes I am. It's one of my few day one purchases this year.

Would've gotten the collectors edition had it not been a figurine.
F

It's Yoko Taro and Kamiya making a game together.

I'd liquefy it and inject it directly into my veins if I could.

how is this not an OT?
T

Yes, I will get the PC version later.

I'll be too busy with Nioh and maybe Horizon this month.
R

If you dont buy this a fairy will die in a distant planet, you are warned.

Do whats right, do what your heart tells you.

Also 2B has some of the best piece of ass I have ever seen, god damn it!!
S

Dunno..First Nier game was a blind purchase for me so it was very special experience without any expectations ala Demons Souls.... Now this is a sequel which screams made by Platinum games which doesnt mean it will be bad of course but it wont be an experience like Nier.
It is a sequel to a game which never needed and has a special place for me. So i will skip it to avoid spoiling the Nier that i liked.
O

Mine has been pre-ordered since forever.
S

Fuck yeah I am. This game has some crazy potential to be one of the greatest.

Good call OP!! These threads are a pretty cool idea. ^^'

And yes, I will buy it. *calms everybody down* I know I know, I'm full'a surprises.
T

I dunno. I played the demo, and after a long anticipation, I just wasn't able to get into it. Felt more stiff than I thought it would be. I just couldn't figure out how to make the combat flow like I've seen others do.

I've never been into beat 'em ups, so I'm not too surprised I feel this way.
A

I'll buy it on sale. Nioh and for honor will satisfy my lust for combat this month.
B

Nioh and Nier day 1 baby. Character action games are my jam (or ARPG if thats what we call em now)

Yes, I will buy Nier when it's released on PC

Ultimadrago said:
Yes, I will buy Nier when it's released on PC

This, plus I'm already unsure given i haven't played the original.
J

Yes. Would hope for launch but it's coming up next to Zelda. Might buy it at launch and play it afterwards but the demo was amazing and I love PG's stuff.

Nier: Automata Anime is a faithful adoption of the game

FlaffySheeby replied
Jan 24, 2023
Turns out the Nier: Automata secret church was a mod all along
News Drama