NieR: Automata |OT| "I wouldn't expect too much from this game if I were you." 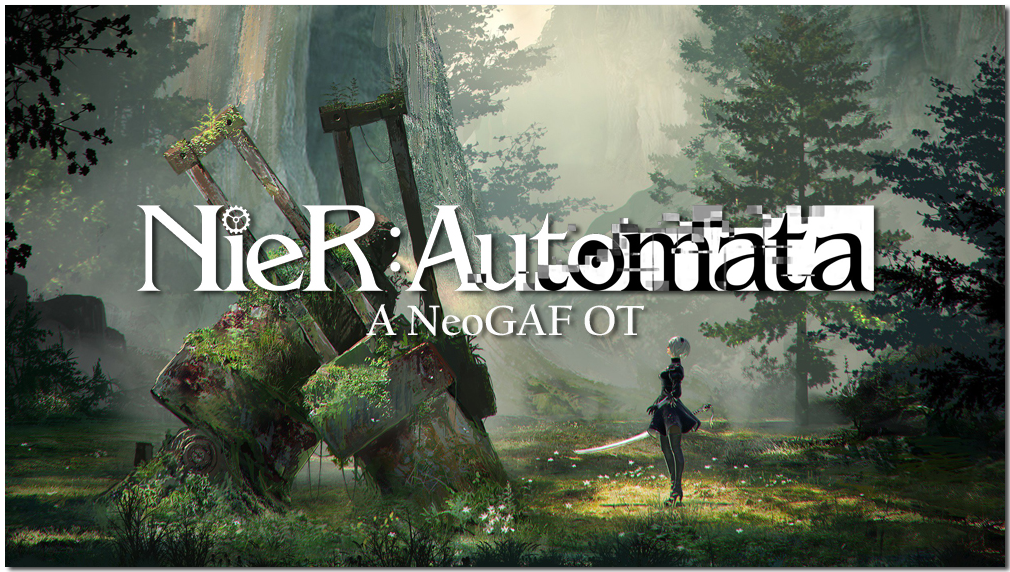 This OT is best viewed with the Dark Theme and best enjoyed while listening to 'The Weight of the World' by Keiichi Okabe. (YT) 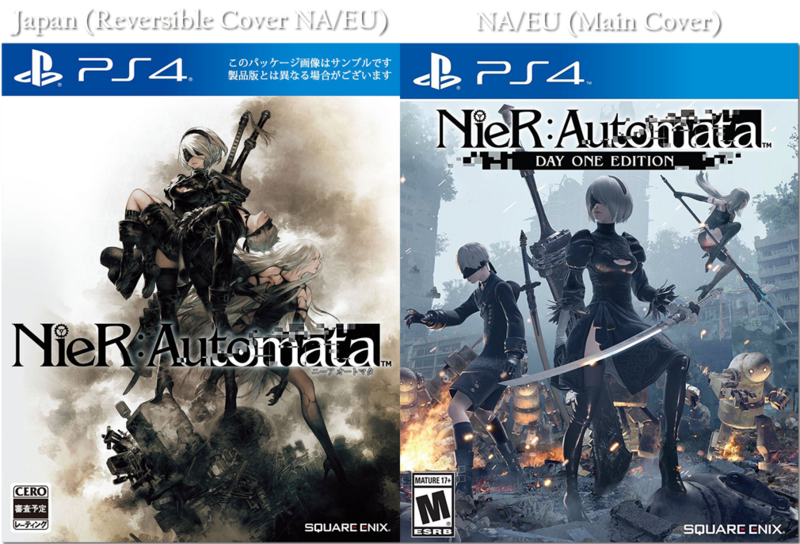 
Sadly overlooked as one of the hidden gems of last generation, the original NieR was an action RPG released 7 years ago that told a story about a man trying to save his daughter from a seemingly incurable disease in a post-apocalyptic world nearing its end. Though it didn't release to critical acclaim, it resonated with many passionate fans who praise its story and music to this day. Directed by none other than Yoko Taro - yes, this guy - it shunned expectations and left a mark all its own, combining genres and shocking players with its raw storytelling. (Text Adventure Pun Intended)​
What is NieR: Automata?


NieR: Automata is an Open World Action RPG that places a strong focus on storytelling. Though you don't need to have played it to enjoy the game, NieR Automata takes place thousands of years after Ending E of the original NieR. Unlike the original however, Yoko Taro & his crew are this time backed up by Platinum Games, known for their high quality action games like the Bayonetta Series & Metal Gear Rising Revengeance, and they've been given almost complete creative freedom by publisher Square Enix.

In short, NieR: Automata is set to combine more of the deep, surprising storytelling of the original with a completely redone combat system created by some of the best action game developers in the business.​
What if I want to play the original first?

If that's what you want to do, you should take a look at Amazon for your country, or a local game store to see if they have any used copies. Otherwise, you should be just fine catching up to speed with either - or both - of these:

How long is the game?

Yoko Taro games include multiple endings, branching paths, and alternate stories, and as with all Yoko Taro games, there will be 'endings' before the actual end of the game - usually to mark timelines or reveal additional information - as a result, to experience the full story of the game and get to the true ending, expect
25-30 hours
. If you want to collect/upgrade/explore/do everything, then expect
55+ hours.
​
What's with that OT Title?

Yoko Taro is a wonderfully weird man.​
I've seen all the endings! Where do I go to talk about spoilers freely?

You can go right here.​

Upon completing the first story route in the game (Route A), players are presented with the above message from Square Enix. Remember to play through the entire game, everyone!​

Invaders from another world attack without warning, unleashing a new type of threat: weapons known as machine lifeforms. In the face of this insurmountable threat, mankind is driven from Earth and takes refuge on the Moon.

The Council of Humanity organizes a resistance of android soldiers in an effort to take back their planet. To break the deadlock, the Resistance deploys a new unit of android infantry: YoRHa.

In the forsaken wasteland below, the war between the machines and the androids rages on. A war that is soon to unveil the long-forgotten truth of this world...​ 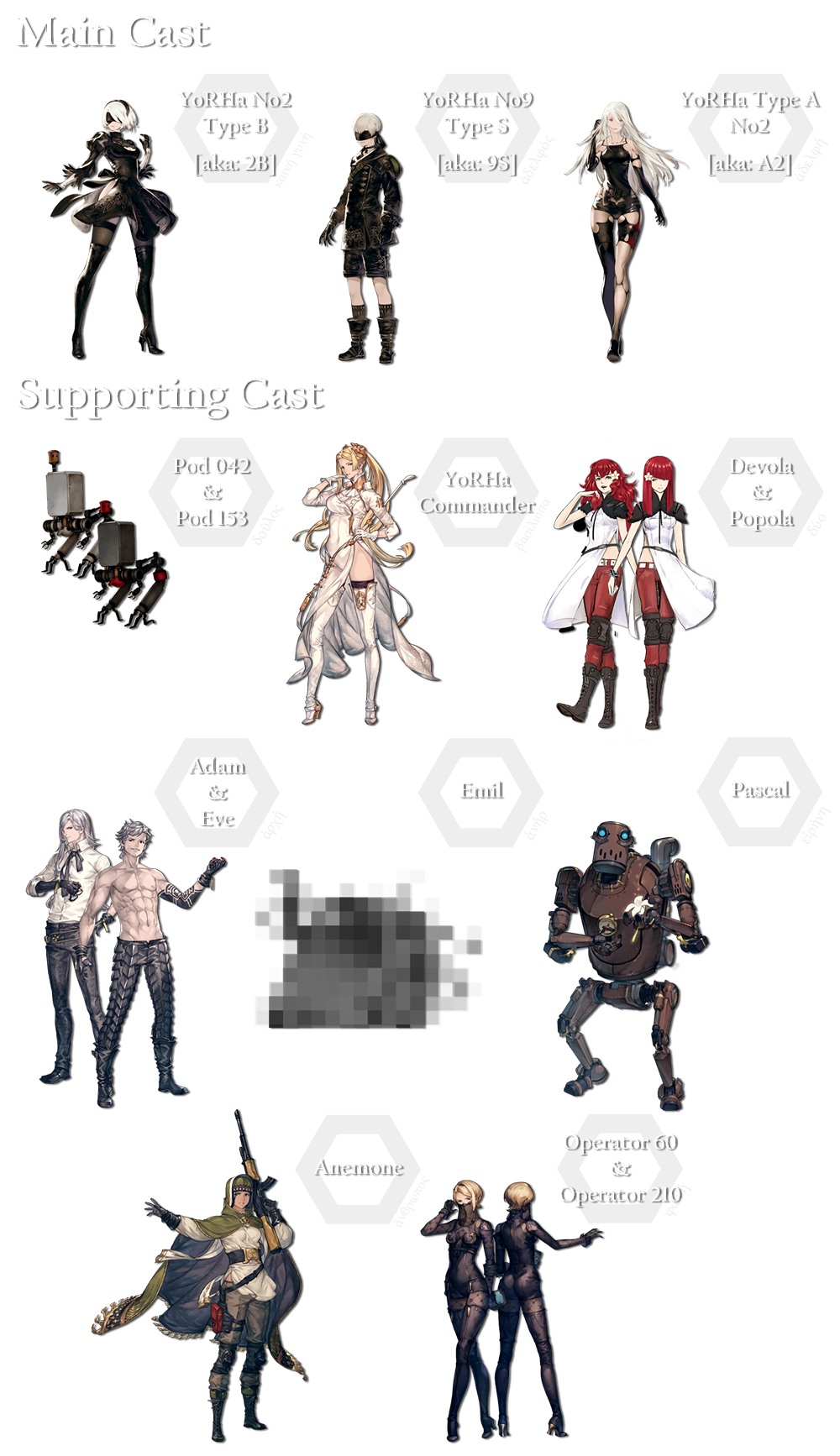 Okay, but why should I buy NieR: Automata?


I could just say it's to give this guy more money & more chances to get his crazy stories out there and be done with it - but that wouldn't be giving it enough credit. Knowing that, here are some highlights of what you can expect going into NieR: Automata:

If that's not enough to get you interested, be sure to check out the Trailer Playlist, as well as the GIF, Screenshot, and Artwork Galleries below.

Players who pre-ordered the Black Box Edition get all of the above DLC - barring the Valve Accessory - plus:
In addition, all Players be able to find the following crossover weapons in game:
DLC (Costumes, etc.) outside of the above content have been confirmed, but specifics have not been offered.

* Special Thanks to mcz117chief for his help with structuring & checking the OT, as well as providing the Greek Names used in the character section.
D

Something something the ending sucks.
E

Im so ready. So sad i still have to wait until 7th March.
B

Ah shit, I didn't know it was out this early in Japan. Have fun guys!
H

Ready for more Keiichi Okabe.
A

DKL said:
Something something the ending sucks.
Click to expand...
It will surely be the happiest ending to grace a Square Enix Game.

I need that OST.
T

Nice OT, I'm reminded how much better the JP boxart is than the western one...

This is my most anticipated game of the year, looking forward to it.
K

I was gonna say "too early" but didn't know it released the 23 in Japan, and it's 22 there already.

Fantastic OT. Tempted to get the JPN version.
J

You can remove the PC release date now. :[
H

Very nice OT!
I'm really tempted to pick up the Asian version so I don't "accidentally" get spoiled before the game comes out in the West.
I

Hype as fuck for this.
J

Awesome OT here! I can't wait for my limited edition...

I hope to play this sometime this month. Fucking college.
N

So when will it be playable on the Japan PSN or Hong Kong PSN? beginning of the 23rd of February?

So this is out in Japan soon... Which means I can listen to the OST ahead of time? Let's hope that goes up very quickly.
J

Novum_Veritas said:
So when will it be playable onn the Japan PSN ir Hong Kong PSN? beginning of the 23rd February?
Click to expand...
7 AM PST on February 22.
H

Great OT! One thing you might want to take a look at though

NieR: Automata is an Open World Action RPG that places a strong focus on storytelling. Though you don't need to have played it to enjoy the game, NieR Automata takes place thousands of years after Ending E of the original NieR.
Click to expand...
And with that, I leave this thread for a few weeks!
L

Can't wait to hear impressions from those getting it early.
J

The true OT title in my heart.
D

Didn't realize that it's out in Japan in a few days.

Jiraiza said:
7 AM PST on February 22.
Click to expand...
So 4 pm tomorrow in my time zone thanks.

Fisty said:
Great OT! One thing you might want to take a look at though

And with that, I leave this thread for a few weeks!
Click to expand...
Grimoire NieR featured what basically amounts to an epilogue to Nier Ending D called Ending E, so OP isn't wrong
S

Jawbreaker said:
You can remove the PC release date now. :[
Click to expand...
Heartbreaking.
A

FYI: if you order the game from Dell.com, it comes with a $25 eGiftcard (delivered 10-20 days after purchase) and free shipping

Also, if you sign up for a free Dell Advantage membership, you can upgrade to free "expedited" shipping, which means you'll have the game in hand a day or two after release.

Looking forward to getting those great early impressions.

Okay just preordered it even though I won't touch it till I've finished Zelda. Demo was just too good.
L

Damn, I just realized that we still haven't seen how 9S or A2 plays.
H

will there or won't there be a PC version? i am confused
G

I really hope that it manages to really sweep me off my feet all over again like the first installment did last generation. One of my favorite titles receiving a follow-up that I never expected with involvement from Platinum Games being the little cheery on top that'll probably mark this as another memorable escapade from Yoko Taro! March 7th can't arrive soon enough!

Now that is a well made OT.
K

Oh fuck, this game comes out this month too? And here I was worried I wouldn't have time for Horizon with Zelda on the... horizon. Guess HZD is gonna have to wait, that Nier demo was just too fucking good and took me by complete surprise. Hadn't had that much fun with an action game since Revengaence.
M

Cant wait, one of my most hyped releases this year.
B

Jawbreaker said:
You can remove the PC release date now. :[
Click to expand...