The idea of a cheaper 3DS without the 3D was a brilliant idea in my opinion. The design of device is what lets it down though. Doesn't seem very practical. To be honest, I thought the first render posted in this thread was a joke post. Very strange design, and small screen. Weird move.

Edit: Oh?? It's aimed at little kiddies?? That may work then. Still think the design could have been better - but to a kid (I'd say under 12 at most) it wouldn't matter.
K 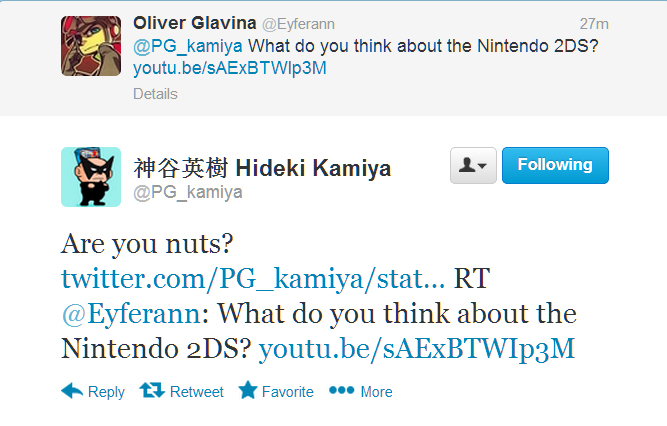 Definitely pretty ugly but its cheap and and will have a great library, I dont have a 3ds right no and will probably get this, I dont care for 3d.
E

I don't see much to balk at. Will definitely turn some heads with its WTH-that-looks-kid-friendly and entry level price. It looks just right at that price.
T

Many thought that about the Wii U Gamepad as well.
M 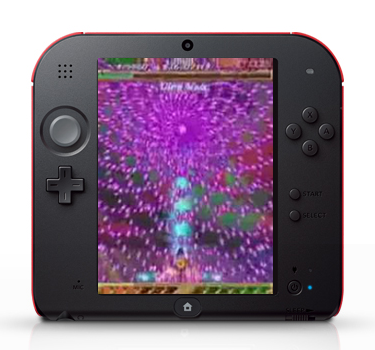 Make this shit happen, Ninty and I am there day one!
T

I Stalk Alone said:
kids are playing with 10 inch ipads at 5 years old. surely they can use this. look at the photos of those kids, once you see them holding it, it looks fine.
Click to expand...

But the 2DS has much more negative space before you hit the touchscreen, whereas your fingers are right above touchscreen controls on tablets.


TheGreatMightyPoo said:
Many thought that about the Wii U Gamepad as well.
Click to expand...

One reason I haven't bought the Wii U is because I still do find it uncomfortable.

Duxxy3 said:
My last thought - If there is a 3D-less 3DS, maybe a gamepad-less WiiU is next.
Click to expand...

One's a graphical effect, the other is a fundamental input method used throughout virtually every aspect of the system interface and huge volumes of software.
O

Quoting this so more people can see it.
I

Duxxy3 said:
My first thought - is this april fools?

My last thought - If there is a 3D-less 3DS, maybe a gamepad-less WiiU is next.
Click to expand...

no, because the Wii U gamepad is necessary for OS use on the Wii U, unless they re-do the OS its not happening
P

I just realized, with this they can finally say they have a Nintendo DS 2!
Q

Once again, just because products are for kids, doesn't mean they have to give it a terrible design. Insulting me won't change that fact.
S

I'd like to say something a little stronger, but I'll stick with 'ugh'.
L

In this thread: a lot of people are easily confused.
(seriously, there is enough "wait...wut...wut...I don't even...wut" and "the fuck? is this april fools?" in this one thread to properly respond to hundreds of nintendo threads.)

It's just another option for people who are interested in playing the games released for the 3DS. Features have been removed, lower price point achieved. Very simple.
R

Samer said:
I'm thinking about how unlogic the part in Zelda where you need to
close your DS in order to copy a map from the upper screen to the lower
will be in this new model.
Click to expand...

Lets....um....just forget about those Zelda games for ds. They go in the 'didn't-happen' bin with metroid other m.
P

Judging from the colour scheme I'm thinking this was designed by whoever designed the Wii Mini... fitting, as it has now replaced the Wii Mini as the worst looking console I have laid eyes on in recent decades.

The 3D on the 3DS was a needless gimmick that needed to go, sure, but like this? Taking a handheld with already awkward form factor and giving it the worst form factor in portable history?

Only justification I can think of is that it's cheaper, alas less money went into the design.
A

I'd consider it if it were the clamshell design.

In which games does the 3D directly effect the gameplay?

You're not odd, and the sales will tell it. Nerds are just being loud, as usual.
G

Oh my god, that is the ugliest piece of shit I have ever seen, hahahaha.
J

It's a clear attempt to head off a worrying trend--younger and younger kids wanting tablets and their parents obliging, combined with cheaper and cheaper quality tablets like the Nexus 7 and iPad Mini. There are 3 year olds who are playing iPad games right now. I know this is shocking for people who are 18-22 but when your friends start having kids, it's amazing. The kids are illiterate but figure out how to unlock it, launch the games they want, and play them. And sometimes even purchase.

This is about recapturing those kids. And also their parents--although parents are worried about kids breaking or scratching, that worry evaporates a little more with each passing month that tablets become more ubiquitous and accepted. This is Nintendo adopting more of the tablet form factor and lowering the cost of entry, and since young kids aren't supposed to use the 3D anyway no harm no foul (doesn't hurt that it's not a selling point).

They still face extreme barriers in terms of software pricing and the way the app market has disrupted it, as well as software variety issues... and I'd also add that even a kid can figure out that two cheap screens and a stylus ain't the same as one beautiful continuous screen with finger power, but I think it's a good move by Nintendo.

I expected to be quoted for crow or posterity after the reaction "what an ugly pile of shit" crowd calms down a little
Click to expand...

This is why I expect the next hand held from Nintendo will use the 2DS as it's starting point. More screen space of course while keeping the physical buttons. Shaped even more like a tablet to grab the attention of younger kids that might want to play with iPads, etc. More screen size right from the start won't be surprising. Especially since Nintendo not sees or wants to get mobile games to go along side traditional hand held gaming offerings. It's a question of do they stick with two screens or go for a single larger one and split it via software on a game by game basis.

Saw this in my Youtube subscriptions... thought it was a bad joke and disliked the video... come to GAF and... WELP!

What the fuck. If you're going to do a 2D 3DS at least do it right, but as for kids I do think it looks good, but quite unappealing for others. Nintendo 2DS by Fisher Price?

A Pretty Panda said:
I'd consider it if it were the clamshell design.

In which games does the 3D directly effect the gameplay?
Click to expand...

I've found some parts of Mario and Luigi to be much harder without the 3D (dodging enemies and special moves during battles).
M

Off-Kilter said:
Quoting this so more people can see it.
Click to expand...

Its like a game boy micro!!!!! Except not at all

If you were going to do this you better make it tiny Nintendo :[
Z

nampad said:
Just saw this thing at least comes with a power supply, unlike the 3DS XL. Never could understand that stupid decision.
Click to expand...

How do you charge an XL?
D

TheGreatMightyPoo said:
Many thought that about the Wii U Gamepad as well.
Click to expand...

I dont know if they had kids or adults in mind with the WiiU Gamepad, but when I as adult hold it in my hands it looks and feels far from what this 2Ds looks like.
R

Visualante2 said:
I think a clam shell is far more kid friendly than anything else. It's not like Nintendo is putting gorilla glass on these screens...
Click to expand...

I was thinking of my nieces and nephews. They leave their Nintendo clamshell handhelds laying on open on the floor just waiting to be stepped on and snapped in half. This looks like it would be harder to break.

Off-Kilter said:
Quoting this so more people can see it.
Click to expand...

Did you see the picture of 2 adults playing it? Can't really use that argument.
S

I was more referring to the 'only neckbeards care about nice hardware' nonsense.


zewone said:
How do you charge an XL?
Click to expand...

With the charger that you have to buy separately.
G

nampad said:
Just saw this thing at least comes with a power supply, unlike the 3DS XL. Never could understand that stupid decision.
Click to expand...

Comes with one in NA
T

zewone said:
How do you charge an XL?
Click to expand...

It ccomes with a charger in the US
S

The fact that something is a toy doesn't make design unimportant.
E

This is prefect. I do not like the way 3d looks and I was hoping to buy a ds again to play Pokemon.
B

emag said:
Some sites are reporting that under the plastic, the two screens are really one shared panel (hence the lack of a hinge).
Click to expand...

Hmmm that opens up some interesting moding possiblities.
6

Uhh, he is responding to people being stupid and asking the same question 100 times in a short period of time.
M

The DS and 3DS are both uncomfortable for button based and touch based games. I think think this will work better personally.

I should also note I don't tend to take handhelds outdoors anyway (well except the wonderful Gameboy Micro) so the form factor and un-fold-able design don't bother me in the least.
M

All I can say is, i hope this doesn't cause market confusion.
P

Oh. So this is the 2DS I keep hearing about today. I thought that people were referring to the original DS or something.


ABXY said:
I actually prefer the sleep button as opposed to closing the system.
Click to expand...

Yes, but putting the system in sleep mode with a button makes no sense under that context. What the game wants you to do is to press something, which you can simulate with closing the 3DS. How is a sleep button at all related to that? It will just confuse people for no good reason.
T

Kamina said:
I dont know if they had kids or adults in mind with the WiiU Gamepad, but when I as adult hold it in my hands it looks and feels far from what this 2Ds looks like.
Click to expand...

My point is that Nintendo doesn't make uncomfortable hardware.

Or at least nothing I have bought from them in that regard was.

The original 3DS is a bit rough with its edges but what Nintendo hardware is uncomfortable to use???

And no, the Virtual Boy never counts ever.
You must log in or register to reply here.

May 10, 2021 started pasterpl
May 10, 2021
Bernkastel
Poll What are the chances that Nintendo brings back 3d screens for the Switch successor?