Overall retail sales were up 1% year over year.

Hardware sales were up 20% year over year.

Retail software sales were down 13% year over year. 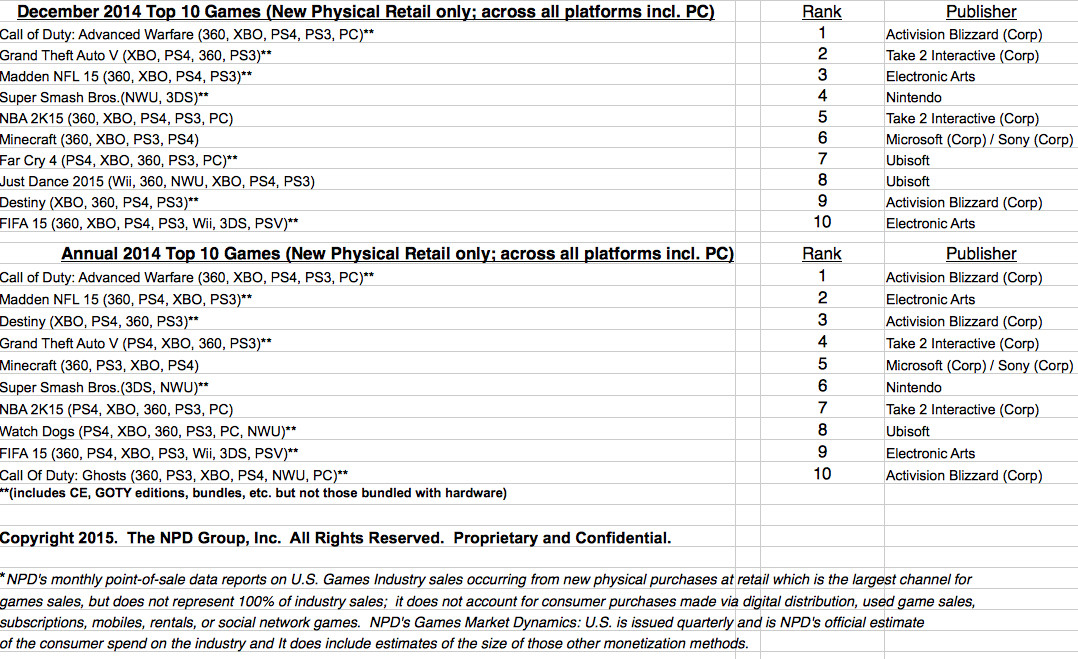 Xbox One: Best selling platform.
PS4/XB1 Combined: Around 2.33 million based on Note 3 below.
Wii U: Best month ever.

Notes:
-Xbox 360 became the best-selling seventh generation console of all time in the U.S.
-Xbox One became the best-selling console in the U.S. in November and December and weekly average sales during these months outpaced Xbox 360 by 50 percent at the same point in its lifecycle.
-After 14 months on the market, cumulative sales of PS4 and Xbox One exceed the Xbox 360 and PS3 cumulative 14 month total by 65 percent.
-The PS4 was the best selling console for the year as a whole.
-Wii U hardware sales are up 29% for the year as a whole over 2013.
-[Accessories Note]: Amiibos are a bit under 2.6 million units sold. This is around a 70% attach rate to the Wii U. There's still conceptual growth room given Skylanders was over 175 million toys worldwide as of May. Since there's interest in this segment now, I will try to put more (toy) accessories updates in the OP in the future.


Microsoft PR said:
Xbox One Closes a Record-Breaking Holiday and Looks Ahead to 2015

I want to thank all of the Xbox fans who contributed to our record-setting holiday and making 2014 such a successful year. The Xbox One deals were quite popular and have inspired a new promotion starting January 16 where fans in the U.S. can buy an Xbox One for $349 at their preferred retailer.

Some interesting statistics about 2014:

&#8226; Xbox 360 became the best-selling seventh generation console of all time in the U.S.
&#8226; In 2014, users logged nearly 8 billion hours globally in apps across Xbox 360 and Xbox One, a
50 percent increase from time spent in 2013.
&#8226; Xbox One became the best-selling console in the U.S. in November and December and weekly average sales during these months outpaced Xbox 360 by 50 percent at the same point in its lifecycle.*
&#8226; Xbox One also sold more games throughout November and December in the U.S. than any other current-generation platform.*
&#8226; From November 24 to January 3, fans spent more time playing on Xbox than they ever have before, at any point in the history of Xbox.
&#8226; In the Halo 5: Guardians Multiplayer Beta alone, 18 million games have been played to date.

The Xbox Wire has a great year in review summary and what to expect in 2015, including a few upcoming console titles and the future of PC gaming on Windows 10. You can find that article here.

* According to NPD Group

Sony PR said:
&#8220;PlayStation 4 was the top-selling console in the U.S. and globally in 2014,&#8221; a Sony Computer Entertainment America spokesperson told GamesBeat. &#8220;And [it is] the fastest selling console in PlayStation history with 18.5 million sold through after just 14 months in the market. We are humbled by this success and want to thank gamers worldwide for helping us achieve holiday sales of more than 4.1 million across 123 countries and regions. We are looking forward to another momentous year in 2015 and bringing an epic line up of titles to PlayStation fans around the world.&#8221;

Nintendo 3DS also had a strong December, including its largest month ever for first-party software sales. This was primarily fueled by Super Smash Bros. for Nintendo 3DS, which has already surpassed 2 million combined physical and digital units sold in a little more than three months, and Pokémon Omega Ruby and Pokémon Alpha Sapphire, which have combined to sell over 2.6 million physical and digital units in their first six weeks.

&#8220;Wii U had its strongest year yet thanks to the highly anticipated software lineup and the introduction of the amiibo platform,&#8221; said Scott Moffitt, Nintendo of America&#8217;s executive vice president of Sales & Marketing. &#8220;Fans can anticipate another strong year for 2015, especially with more highly anticipated games like Splatoon and The Legend of Zelda: Majora&#8217;s Mask 3D, as well as New Nintendo 3DS XL, arriving in the first half of 2015.&#8221;

Other Nintendo highlights from the full 2014 year include:

Nintendo is looking to ride the wave of momentum into 2015, with the launches of Splatoon, Yoshi&#8217;s Woolly World, Kirby and the Rainbow Curse, Code Name: S.T.E.A.M. and Mario Party 10. On Feb. 13, Nintendo will also launch the New Nintendo 3DS XL in the United States alongside The Legend of Zelda: Majora&#8217;s Mask 3D.
Click to expand...

The software situation is interesting.
O

Top ten has been looking the same since forever now, minus a few new games.
F

Wow only Farcry sold better on PS4?
A

Shit, Pokemon got pushed out of the top 10 already? That's pretty sad.
N

Damn. Looks like the US is MS land again going by software platforms.

Wow, Microsoft beat Sony in everything for software except Far Cry 4, didn't expect that!
T

Aquamarine said:
you shouldn't have.

the wii u has been enjoying yoy gains all year long.

Time to settle in for the night.
D

According to what Major Nelson revealed, CBOaT must be spinning in his grave.
E

I've been waiting for this.
G

X1 again, no surprise there.
N

Drooling for KH2.5 numbers.
A

Xbone had a great library and Microsoft was aggressive with the pricing. Well deserved win.
A

looking forward to this
R

Interesting to see XBO software doing so well, especially seeing Destiny LTD in the US above PS4. Would not have guessed that. (though I suppose that doesn't include bundles, correct?)
M

Look at the month order vs. year order
P

Wow, Xbox domination in the software charts this month.

Sony needs to act fast.
B

It's not combined.
Combined would likely put it above many.
D

GTAV staying relevant to that degree shouldn't surprise me, but it still does. Good lord.
L

What a horrible top 10. Ew. (Save for Smash Bros and GTA V anyway)
C

Well deserved for MS.
A

RoKKeR said:
Interesting to see XBO software doing so well, especially seeing Destiny LTD in the US above PS4. Would not have guessed that. (though I suppose that doesn't include bundles, correct?)
Click to expand...

Correct, it does not.

makes sense. xbo beat ps4 in dec in a lot of software...but ps4 ahead in total copies sold.

For December and the year, the only game in the Top 10 on < 4 platforms was Smash on 3DS and Wii U. Miss the separate SKU rankings.

Really suprised how dominant XB platforms are for software
P

someone calculate PS4 sales from the info they gave
You must log in or register to reply here.

Kagey K replied
Yesterday at 7:11 PM
The best selling consoles of all time in the US, UK, and Japan as of 2022 (LTD sales numbers)
2