This reminds me, I need to pick up Boktai 2.

I'm really surpised the eBay prices are reasonable... I've only actually seen one or two copies in the wild.
P

Thanks to the Gameboy Micro thread, I've gone on a GBA shopping spree, armed with a dozen 20% off GBA Gamestop coupons.

Thus far I have picked up:

I'm thinking about getting the Golden Sun games but I've heard that they are way too text-heavy. Yes, No?

Also I thought I should mention Shining Soul II, it is super awesome! It's basically Diablo II with anime characters. It is, as imagined, exemplified in its awesomeness in multi-player but the single player is still a hell of a lot of fun. I've gone through the game with several characters.

Another mention is Dragon Ball Advanced Adventure, it's very similar to the Treasure GBA platform shooters but more focused on melee fighting instead of pew pew. The game has a ton of extra content and an insane amount of playable characters PLUS an wholly separate one-on-one 2D fighter. Plus, who can deny the cuteness of little Goku and Krillin? NOBODY, that's who. Don't let the license foll you, this is a FANTASTIC game.

Also you MUST get Sting's games, Riviera and Yggdra Union for the production values alone. Plus, they're awesome games. Riviera is a graphical Choose Your Own Adventure book with RPG battles and Yggdra Union is a very fresh twist on the Strategy RPG.

Summon Night Swordcraft Story 1 & 2 are both great as well, they're basically dungeon crawling Tales games with a heavy emphasis on crafting weapons with materials. They're both annoyingly talkative, but the gameplay is utterly fantastical 2D Side-Scrolling Action RPG yumminess.

My final suggestion (for now) would be Puyo Pop, the last great Puyo Puyo game before Sonic Team murdered the series with the craptacular Puyo Puyo Fever series. This is basically an expanded version of the best Puyo game, Puyo Puyo Sun, made portable. It's my personal favorite puzzle series just based on the fact on how much skill it takes to set up and execute chains and combos. Let's pour a forty for our departed friends at Compile.
G

You know, I honestly can't believe that the GBA only lasted about 3 years.

It seems like it was a lot longer.
O

The Gameboy Advance definitely has one of the strongest libraries outside of the PS2.
R

Wario Ware Twisted is not only vastly superior to the GBA original, which was excellent in its own right, but it has so many secrets and minigames to collect and play that it'll keep you busy for a long time.

I still play it. Apple Siege and Mewtroid are the best, and you can't beat my hi scores. >:O
S

It's basically a combination of Bionic Commando and Ninja Gaiden and it's so awesome. The only problem is that it's really expensive.
Click to expand...
In which Ninja Gaiden do you rescue hostages?

It's pretty easy, but great fun. Only got a release in Europe though I think
J

Only good until 6/26/08, but I figure this will help out a few people reading this thread: Write, need to start jotting these down now. Few up there that I've not got yet.

I bought this GBA SP last week from a certain game importer, it should be arriving Tuesday. Can't wait to get it. I already have a GBA SP+, but this one is one of the first model GBA SPs with the front-lighting. I had one of these way back when they first came out, but sold it for the + model. I've found that the plus model with the better backlighting looks better for indoor playing, but is a visual mess outdoors in the sunlight. The old front-light GBAs have reflective screens that look much better in the sunlight.

This'll be my fourth GBA system, and I'll be buying second Micro soon for my fifth. It's a sickness.
D

The lack of Super Robot Taisen OG 1 and 2 is disturbing, seeing as the GBA is the only platform worthy of a non-japanese version for this series.
R

Do they even sell GBASP+ anymore?
D

a mortal sin was commited when you included Counter Punch instead of/before Hajime No Ippo.

Ippo is one of the finest games on the GBA.

also, im suprised no one made any comments on your write up of Harmony of Dissonance. it received lots of hate around here. (i was just playing it earlier on my Micro)
C

edit: That said, great thread, and mad props for recognizing the overlooked MOH: Infiltrator.
B

Linkzg said:
Do they even sell GBASP+ anymore?
Click to expand...
No. No brick and mortar stores have new GBAs or Micros in stock anymore. You might find some websites that have them or Gamestops that are selling used ones.
L

Are all the Megaman Zero games pretty decent?

And is Metal Slug Advance a port of one of the previous games, or a unique game?

Thinking about expanding on my GBA library in the future.
R

 Developer: Namco
 Publisher: Namco
 Release: US 2001 | EU 2002
 Description:
Klonoa: Empire of Dreams may be "yet another platformer," but you really have to appreciate all the thought that went into the each of the level designs in this extensive game. You don't just wander from left to right collecting tokens to get to the very end...serious thinking is required to advance through all of the game's stages.

Seriously, one of the best 2D platformers I've played. The puzzles are fanatstic. I feel smarter playing this game.
J

I really miss Klonoa I loved that game (And finished it as I remember) but lost it while on holiday. Quite tempted to pick it up again.

lupin23rd said:
Are all the Megaman Zero games pretty decent?

And is Metal Slug Advance a port of one of the previous games, or a unique game?

Thinking about expanding on my GBA library in the future.
Click to expand...
1) Yes, but MMZ2 and 3 are especially fantastic.

2) It's unique, but not nearly as good as the main series.
R

gaf has read my mind. cause I too have just picked up a micro this weekend. Which makes it my 6th gameboy (orginal 2x, color,advance, advance sp and now micro) I just keep coming back to it
P

And my must buy drill dozer thread
L

thank you for this thread Arturo. great stuff. I'm looking for some new games for my GB Micro and this thread is a godsend.
P

The GBA was one hell of a game machine, sooo many good games. 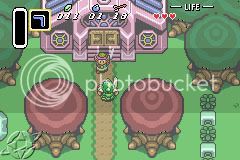 Still such a good looking game!

Seriously, one of the best 2D platformers I've played. The puzzles are fanatstic. I feel smarter playing this game.
Click to expand...
I only played the 2nd one but I agree (finished it 100% a couple weeks ago). The puzzles in the last world were really inventive, got me thinking for some long minutes :lol:. Plus it has that and some tough platforming section in the EX stages. Only downside are the annoying hoverboard stages.

Good topic. GBA has a really good collection of great games. I see some missing so far and some I find strange being on here, but overall, good list.
C

Cant wait to see this finished. Sooo many great games on the system.
V

Pokemon Pinball deserves a spot, I think. I'm not a Pokemon fan, but it's a solid pinball title either way.
L

You put in Harmony of Disappointment and not the MM Zero series or the MMnB port?

Not even mention of the MM Battle Network games or ST!NG games?

Your list really should be at least ... three times as large.
E

I just wanted to say you're doing a wonderful job.
R

Question... Are GBA games region free? My brain tells me that they are free but I wanted to check before dropping the cash on games.

I really liked this game:

The truely horrific part of this is that I could add 30 or so titles off the top of my head that should be added.

This thread reminds me how much I loved my GBA.

And whoever did the graphics has amazing taste in games: From Top Left, Counterclockwise: Final Fantasy II, The Legend of Zelda: A Link to the Past, Super Mario World, Super Metroid, Secret of Mana, (Unknown).
J

While this thread is great for Western releases is the anywhere that has a list of good Japanese imports?
J

lyre said:
You put in Harmony of Disappointment and not the MM Zero series or the MMnB port?

Not even mention of the MM Battle Network games or ST!NG games?

Arctic Feather said:
While this thread is great for Western releases is the anywhere that has a list of good Japanese imports?
Click to expand...
Here are some of my imports I would recommend:

Awesome thread.
However Max Payne was not developed by Treasure - it was developed by Mobius/Rage/Rockstar Leeds, whatever their name was at the time.
B

Well congratulations! You got yourself caught!

Princess Skittles said:
Another mention is Dragon Ball Advanced Adventure, it's very similar to the Treasure GBA platform shooters but more focused on melee fighting instead of pew pew. The game has a ton of extra content and an insane amount of playable characters PLUS an wholly separate one-on-one 2D fighter. Plus, who can deny the cuteness of little Goku and Krillin? NOBODY, that's who. Don't let the license foll you, this is a FANTASTIC game.
Click to expand...
This game is so overlooked and awesome, it's ridiculous. It's in the bargain bins of pretty much every video game store. Last time I was in K-B Toys, it was $10. A real steal.

I move to mention Mother 3. The only way you can play it in English is patched, though. That didn't stop me, though. Bought it Day One and fought through it, language barrier and all.
S

god I love my advance SP...

thanks for the game reccomendations!
P

My next GameStop target shall be Pocky & Rocky (with Becky).
F

Princess Skittles said:
Here are some of my imports I would recommend:

Klonoa Heroes
Monster Gate
Mr. Driller A
Summon Night: Swordcraft Story 3
Tales of the World: Cosplay Dungeon 2
Click to expand...
so there's no plan to localize it then ?
A

Jonnyram said:
Awesome thread.
However Max Payne was not developed by Treasure - it was developed by Mobius/Rage/Rockstar Leeds, whatever their name was at the time.
Click to expand...
Sorry! My mistake. These are the problems of copy/paste
J

flintstryker said:
so there's no plan to localize it then ?
Click to expand...
We're lucky we got the first two considering how strong the DS took over the GBA market.
B

Click to expand...
Beautiful. The GBA boxes are so nice!
M

Arturo said:
Broken Sword: The Shadow of the Templars

 Developer: Revolution Software Ltd.
 Publisher: BAM! Entertainment
 Release: US & EU 2002
 Description:
BAM and Revolution Software have managed to pull off an engrossing story with Broken Sword: Shadow of the Templars. While the genre won't likely be resurrected by this title, it will at least get a solid bang before it possibly disappears for good. While there's no replay value, the game does require some solid hours and is absolutely worth the time you put into it.