Veelk said:
This is double posting, but since the post got lost in the last pages now Widowmaker's outfit is being discussed, I'm just gonna repost it here.


A lot of people get antsy about sexualized fanservice, and often for good reason. The problem with sexualizing your characters is that it tends to sexually objectify them. Objectification is dehumanizing, and that's pretty much always bad.

The reason why I think Blizzard does a good job, or atleast a better job than most is in these two pictures. Widowmaker is fairly sexualized in her design and this is consistent with most of her outfits. The Huntress and Comptess ones are the only ones who I feel are set to a design that doesn't sexualize her. The default, ballerina, Talon, and now this swimsuit sexualize her body to varying degrees. And while I can see the design themes adhering to one archtype or another, it's debatable whether being so sexualized is an integral part of her character.

If every female character was as sexualized as Widowmaker, this would be a major problem.

But instead, you have Sombra. She's not really sexualized in any of her outfits. And if there is any pretense that blizzard could get away with sexualizing their characters, a 'beach event' is basically the one because that's where people tend to show off their bodies even if they're not typically sexual characters. But Sombra is wearing a swimsuit that doesn't do that at all. While showing feminine curves, I don't feel this outfit is sexualized beyond that.

And that's the ultimate thing. The Women of the overwatch universe aren't defined by their sexualization...Only Widowmaker is. Maybe D.Va too, but that's it. It's the fact that they have diversity, women who are sexualized and women who are not, that makes this whole thing easier to accept, atleast for me. It's not perfect, but it feels a lot less objectifying when it's clearly not something that is applied wholesale just because a character is a certain gender.
Click to expand...

While I feel that people focus a bit too much on whether or not a character is sexualized, to continue a thought from this post, the reason why D.Va might be sexualized could also be attributed to her age. A lot of girls hyper-sexualize themselves in their teens because of low self esteem.
K

Should be within the next hour or two.
S

If it's like the usual updates, within the next 2hrs or so.

76 totally has a speedo on doesn't he? That's why the shot is framed that way. 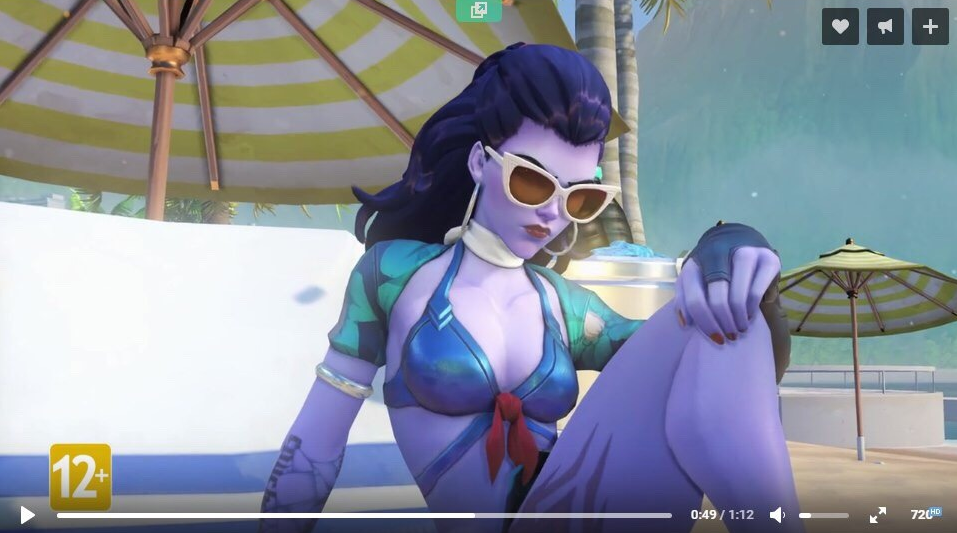 Wait is there no Speedo Roadhog? Disappointed!

Maybe she puts on the sunglasses when she ults 8)

Nirolak said:
Yes. He has socks and sandals.
Click to expand...

Take my money. (as usual)
A

Come on Genji please get a new highlight or emote!
F

I can't handle that.
T

that one looks fake.
K

IS THAT A BMX REAPER?
L

This might sound weird, but Sombras outfit is hotter than Widows.
W

Is that Master Chief but orange
R

That shit's fake. (Please be fake, I'm not committed to any of these skins yet)
N

Dead Prince said:
that one looks fake.
Click to expand...

I'll get lunch quick, but if the website and trailer go up early, feel free to make a new thread with images of all the skins and the trailer.
A

Lord of Castamere said:
This might sound weird, but Sombras outfit is hotter than Widows.
Click to expand...

Nah I think so too. But maybe it's because I have a thing for Latinas. Plus I like her outfit more.
C

what is sombra's skin supposed to be?
I

Ragnorok64 said:
Wait is there no Speedo Roadhog? Disappointed!
Click to expand...

Yuuuup. It's what I was wanting most.
M

That Mercy is Jeff's favourite Overwatch skin EVER? I wouldn't even call it Mercy's best.

Cels said:
what is sombra's skin supposed to be?
Click to expand...

Magnus said:
This is the Jeff's favourite Overwatch skin EVER? I wouldn't even call it Mercy's best.

Cels said:
what is sombra's skin supposed to be?
Click to expand...

This better be real
A widow has pretty large forearms compared to the rest of her arm.
B

Please be real.
A

what is the mercy skin?
S

thread that posted that motocross reaper skin just got deleted

I NEED THIS TO BE REAL
R

That probably means it's not real. Blizzard doesn't manage that subreddit.
O

This is just too much right now, best event ever.

I dont have enought coins for this.
K

I am going to spend money today.
S

kulapik said:
That probably means it's not real. Blizzard doesn't manage that subreddit.
Click to expand...

this is from the official overwatch forums and they are deleting all threads about the leaked summer skins now.
M

aBarreras said:
what is the mercy skin?
Click to expand...