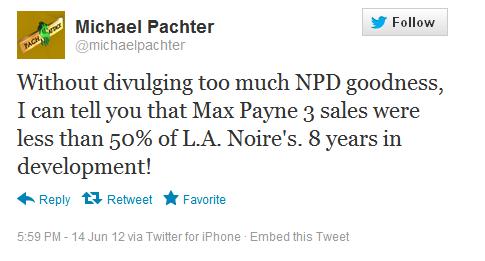 Only because so many people were fooled into buying LA Noire.
L

Such a shame, it deserves much more than that.
P

In the land of the Finns

dropping same day as D3 could not have helped.
T

LA Noire is broke. It dunt work. It's too digital and rigid.

This already got mentioned in NPD. Problems are Rockstar aren't known for linear shooters or shooters in general, fans being displeased with the direction Rockstar was going, it was mainly a PC franchise, third game in a narrative-based franchise that has been pretty much forgotten, and the low reviews.
K

Maybe when it hits the bargain bin, maybe. Not really excited.
S

it is linear and no illusion of an open world for marketing bullshit.
K

idlewild_ said:
dropping same day as D3 could not have helped.
Click to expand...
Bingo.

They should of released it 2 weeks later imo
J

Para bailar La Bomba said:
Only because so many people were fooled into buying LA Noire.
Click to expand...
That was me, at least.
S

Max Payne got Alan Waked.
B

Funds are running out for me, so I had to pass on the game for now.
M

The problem is it wasn't made by real developer of Max Payne games.

I bought, played, finished and liked it - a lot, but nothing about this game is special.

Did not expect this game to do much better - Max Payne 1&2 are to old by now.
Many people have never played them.
LA Noire brought something new to the table - this is how they got people in.
It sure helped that LA Noire was open world - R* key strength.

T2 and R* might have to push out GTAV earlier than they thought.
R

Max Payne 3 was an exceedingly average title. I don't think it deserved to be a blockbuster.

Para bailar La Bomba said:
Only because so many people were fooled into buying LA Noire.
Click to expand...
I was a sucker.
U

To be fair, La Noire had the appeal of having a French name.
S

LA Noire was not very interactive. THis is sad news for those that dont want there games to be nothing but cut scenes.
R

I wonder which one actually made any money..
J

Max Payne 3 has been my favorite game of the year so far. I've always wanted a game like this. It's as if John Woo and Michael Mann collaborated to make a video game. It's a shame it hasn't sold more copies. I'd like to see a Max Payne 4.
D

Para bailar La Bomba said:
Only because so many people were fooled into buying LA Noire.
Click to expand...
*raises hand*
B

MuseManMike said:
Max Payne 3 was an exceedingly average title. I don't think it deserved to be a blockbuster.
Click to expand...
Agreed. Doesn't help that you hate Max already 2 min into the first cutscene of the game. "Oh I'm an alcoholic, I eat pills and my family is dead, I'm a cold killer, gun for hire. I WISH I WASN'T!!!!". Moments later he's bullet timing through the air eating pills, while shooting countless people, yelling funny one liners. Such an amazingly unlikable main character. It's some time since I have played the first two, but I don't remember being this annoyed with Max back then, at all.

Also doesn't help that the story is a mess.

Honestly enjoyed LA Noire much more, even if the pc port sucked.
F

Like I said in the other thread, this seems to be a trend with their non-open world games. When you look at stuff like Bully or The Warriors and now this. They always underperform in the shadow of GTA (and now Red Dead). Even LA Noire, which sold well in a general context, did way smaller numbers than Red Dead.

And I wonder how spiteful some R* fans are about the total silence following the tease from that GTA V trailer. The comments for just about every article I've seen on their official newswire as well as most videos on their official YouTube page are filled with things like "THANK GOD MAX PAYNE IS DONE WITH. TIME FOR GTA ROCKSTAR! NOW!!!". That could be a really small minority, but I've seen it a lot on the interwebs.
J

snoopeasystreet said:
Max Payne got Alan Waked.
Click to expand...
Goddamn it I wanted to make the joke about how ironic this situation was.

I'm not 100% impressed by what I played of Max Payne so far. That said, the quality of the game has little to do with sales so... either the timing was bad (hello Diablo) or the marketing campaign wasn't pervasive enough.

I enjoyed both. I don't know whether its because Rockstar are expected to make open world sandbox games. Whenever I started talking to some people about MP3 one of the first questions would be "Is it free roam ?". Who knows, that's my theory anyway.
B

As someone who really liked the first two games, I lost all interest, when they revealed the setting and Max' new appearance. Now fans of the third game might tell me how wrong I am and that it's still very much like the first two games, but that's not really what Rockstar showed or communicated. I'll get it in a Steam sale in a year or two.
L

.
Bought both Diablo 3 and Max Payne 3 and I enjoyed MP3 alot more.

Yea, but L.A. Noire's development cost is probably 3x as much as Max Payne's.
S

I'll grab it when it drops to $40 or lower...can't justify spending $60 on many games nowadays.
I

Remedy must be laughing at the irony.
S

I played about half of it... did not like it that much. It was very boring after a while. Run run shoot shoot run run cover cover shoot shoot...
X

PantyPhantom said:
Diablo 3.
Click to expand...
As soon as Diablo 3's release date was dropped they should have up a few weeks.
U

I've steered clear of Rockstars stuff on the PC ever since GTA 4 it would take a hell of a lot to get me to start opening my wallet again to them.
2

MP3 was 8 years in development?
R

it's a pretty old brand, and not one which has aged too wonderfully. Not to say it's bad, just not exactly.. rich, compared to pretty much all of their other IP. Was there even any genuine hype leading up to this game?
S

90% of gamers who had a PC bought DIII instead.

And probably per-occupied till now.
M

Since Pachter said it does that mean it has actually sold twice as much as L.A. Noire?
L

Para bailar La Bomba said:
Only because so many people were fooled into buying LA Noire.
Click to expand...
yeah

L.A. Noire sold more because it looked something new and innovative. In the end it was a crappy game but people already payed for the game.

Mp3 is a good game with nice tech, but I don't like the setting and the level graphics. Also the story is not so interesting.

I don't think diablo 3 is a problem. Diablo 3 is a pc game only, it was a success because everyone on pc bought it, but there are a lot of people who play only on console.

Noteworthy the marketing effort of R*, it wasn't enough and added more costs to the development budget of the game. Next time they should avoid game like that being in development for an insane amount of years or with franchise like that they are going to lose a lot of money.
B

MetalGuardian said:
Since Pachter said it does that mean it has actually sold twice as much as L.A. Noire?
Click to expand...
Seeing as it's NPD... No.
C