Jawbreaker said:
Were there stock shortages for this week?
Click to expand...

Yeah I think so. Very few sites had it in stock and were selling it at the standard price as far as I can tell.
J

Mario Kart and Zelda both get a boost, Arms goes down
M

France is the new Japan : Nintendomination ;-) I live in France and it is very pleasing to see how japanese culture is very well implemented here (not only Nintendo products, but anime, manga, lifestyle, food...it is widely popular here)
E

Really surprised Crash held on, probably due to a very slow week otherwise.

Our store cannot find it in distribution in Europe for over a week, We were sold out after 2 days.
T

Crash is sold out everywhere it seems. Even in Game the display boxes all have "Download code only" stickers on them.

Crash could end up having some serious legs if they keep the stock coming imo.
1 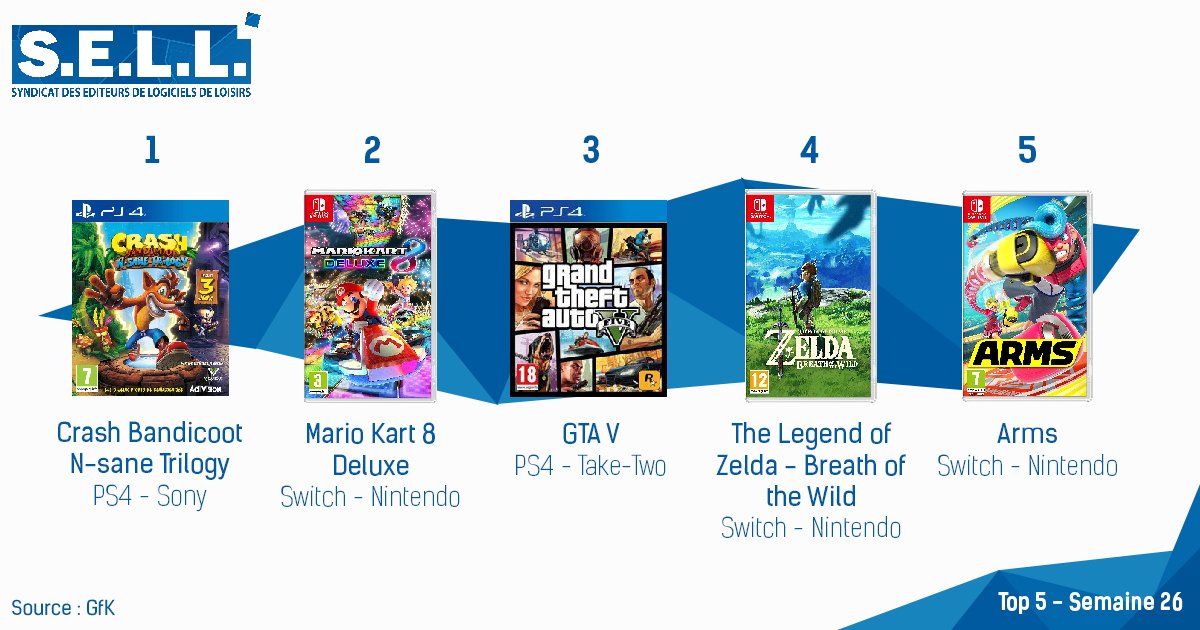 It's baffling to me that the Crash licence has been so misused for so long (when it wasn't simply left sitting around).

No shit the collection is selling. We can harp on as much as we like about how Super Mario 64 revolutionized everything and and OMG analog controls and it sold better yadda yadda yadda, but at the end of the day, the Crash Bandicoot series has the triple distinction of:
- being a more accessible take on 3D platforming than SM64, not to mention being technically more faithful to the essence of 2D platforming (SM64 evolved the formula towards sandbox and exploration and lost a bit of the straightforwardness and immediacy of the 2D Mario)
- selling consistently well over the first 3 episodes, with no real decline (6 million units for CB1, 5 million for CB2 and CB3); many series aren't so lucky, and see steep declines or fluctuations with each new episode, even when they're objectively better, and especially when they don't fundamentally change or expand the formula too much. See Donkey Kong Country or Zelda for instance.
- selling extremely well in Japan, something most Western games - let alone platformers - can only dream of achieving even today

It helps that the price is fair and the collection is, on the whole, extremely faithful to the original titles. Ubisoft Turtles in Time this ain't, no weird remake shenanigans here.
P

Go Crash! Stick it to the haters.
S

Not PAL related but a friend via Japan told me that Crash was sold out on Amazon's JP site so yea, it's still pretty strong in the land of the rising sun.
D

Good for Crash. I wonder how well it would have hold with proper stock. It may see a boost when stock replenishes but there may be some lost sales as well.
You must log in or register to reply here.