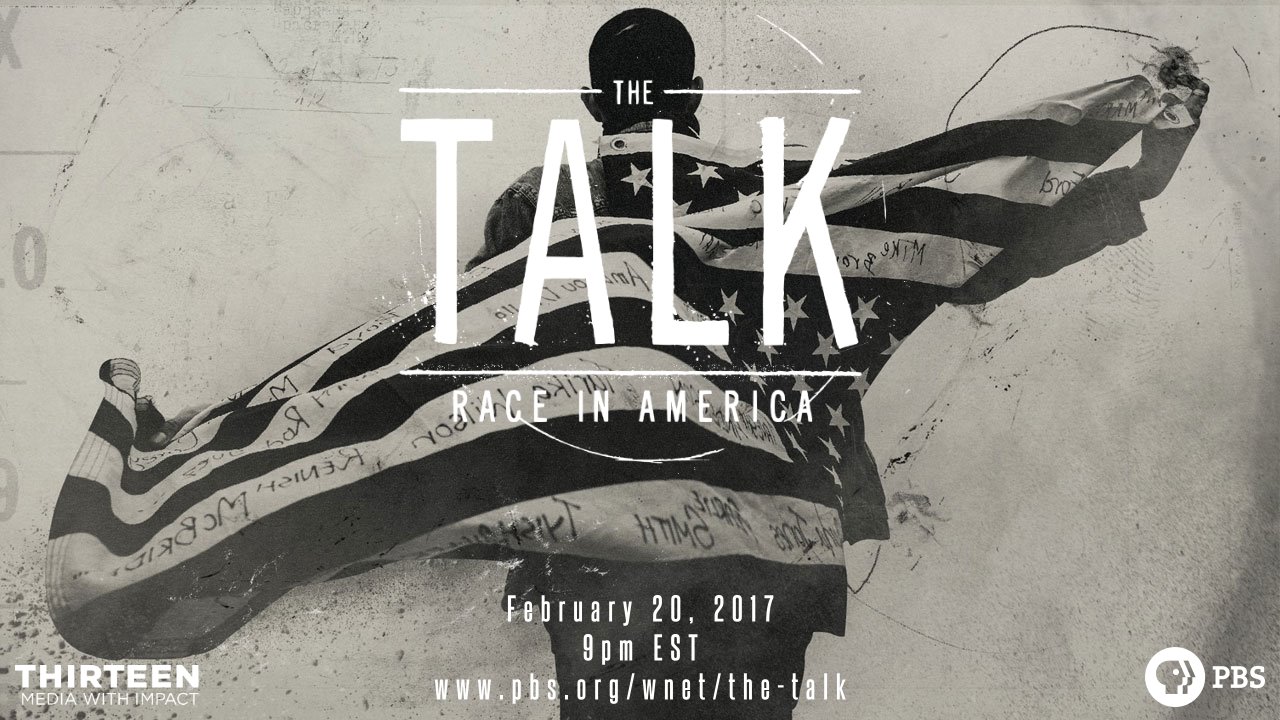 'The Talk' Full Film <== Watch here for free at THIRTEEN's site, or at PBS.org.

The Talk &#8211; Race in America is a two-hour documentary about the increasingly common conversation taking place in homes and communities across the country between parents of color and their children, especially sons, about how to behave if they are ever stopped by the police. In many homes, ”the talk," as it is called, usually contains phrases like this:

If you are stopped by the police:

Always answer ”yes sir, no sir"; never talk back; don't make any sudden movements; don't put your hands in your pockets; obey all commands; if you think you are falsely accused, save it for the police station. I would rather pick you up at the station than the morgue...

Among those profiled are activist and founder of The Ethics Project, Dr. Christi Griffin, who, after living through the traumatic events of Ferguson, created ”Parent 2 Parent," a series of conversations with black parents talking with white parents about ”the talk" with their black sons; Samaria Rice, mother of Tamir Rice, who was a 12-year-old boy killed by the Cleveland police while playing with a toy gun in a local park; Reverend Catherine Brown, who was assaulted by Chicago Police in front of her children in her own car; Trevena Garel, retired sergeant, New York City Police Department (NYPD), who has investigated allegations of misconduct involving both uniformed and/or civilian members of the NYPD; Eric Adams, Brooklyn Borough President and retired officer, New York City Police Department (NYPD); the Ramirez family, whose 28-year-old son, Oscar, was shot and killed by a Los Angeles County sheriff in Paramount, California, a community southeast of Los Angeles; and members of the South Carolina Criminal Justice Academy, who share the protocols for using lethal force and describe the danger from a police officer's point of view.

Each story is produced by a different filmmaker to ensure that diverse perspectives are presented. The project's director and supervising producer, filmmaker Sam Pollard, an Academy Award nominee and multiple Emmy Award winner, and Academy Award nominee Julie Anderson, closely oversaw the producers and managed the overall creative look, storytelling and structure.

More than a television event, The Talk &#8211; Race in America will be accompanied by a national engagement campaign and will seek to address national concerns through local public television stations and community outreach partners.

Extensive social media will support the broadcast and live events with public media stations across the country. Beginning in January 2017, The Talk &#8211; Race in America will launch a seven-month social media conversation at #TheTalkPBS and @TheTalkPBS on Facebook and Twitter. Social media conversations will explore the topics of community policing, the power of representation in media and how to talk to children about race. Online audience members will also be invited to share their experiences of having or giving ”the talk." Visit PBS.org/thetalk for exclusive video content, special features and more. Join the conversation on social media using the hashtag #TheTalkPBS.

Everybody should be watching this.
L

Welp I know how I'm spending my time
L

Damn you make better PBS threads than me. I nominate you as the PBS documentary thread maker.
R

...And I'll be catching that tomorrow. Thanks for the head-up, OP. Frontline is making the best TV that not enough people watch.
S

Bump-reminder that this airs tonight in a couple of hourse.
S

Just start out by showing Tamir being killed
L

Will watch it later tonight.

Remember, Trump admin is doing what it can to defund PBS... They need support if you care about programming like this
T

Thanks for bumping, in missing it but I'll see if I can get it recorded on DVR, sounds like a good one
S

This is hard to watch.
M

"I don't want my son to become the next hashtag."
P

Hopefully I'll be able to find the full thing on Youtube when I get back home in a few days.
F

Shit hit my soul, "I don't want my son to be the next hashtag".

The full film has been uploaded and can be watched either through PBS.org or the THIRTEEN website.

Gonna watch this weekend, thanks for the tip! Happy to see it's viewable from Europe.

News Out-of-control woke leftism and cancel culture' from the U.S is a threat to FRANCE