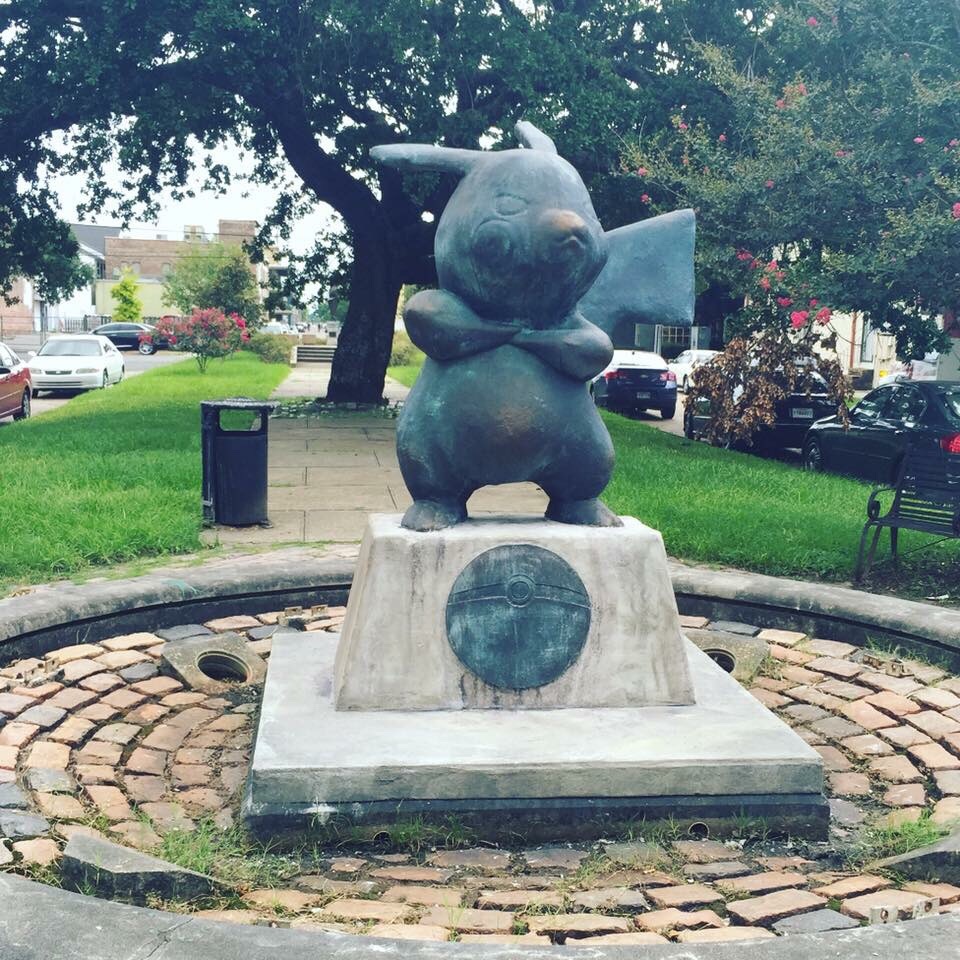 It has begun.
K

Pretty ugly statue.
Also why not put pics in the op.
B

This sure is something else
F

Someone *really* wants a Poké Spot near their house
T

Is there a bomb or something inside? Doesn't that count as a mysterious package for authorities?
P

"One of the most sought after creatures is Pikachu."

That is one haggard-ass Pikachu.

So, no one really knows who put it there?
M

Judging from the before/after, Pikachu ties together the space. The city should let it stay up until it starts falling apart.
E

Why does it have tits coming out of its neck.

NEW ORLEANS -- An old fountain in the Lower Garden District is now a site for the Pokemon GO craze -- or least homage to the game.

Sometime Sunday morning, a Pikachu statue, constructed from fiberglass but made to look like bronze, was placed in the fountain in a small park near the intersection of Terpsichore and Prytania streets.

It is unknown who placed the statue in the park or exactly when it was placed in the defunct fountain, but the statue appears to pay homage to the Pokemon GO, a location-based augmented reality game.
Click to expand...

Nintendo is likely to bring that down before any government action can do it... It looks awful.
N

The alien overlords have realized what we really care about.
M

Pops Maellard said:
"One of the most sought after creatures is Pikachu."

They are not wrong. But they probably wanted to say "the most known" or "the most loved".

Pikachu is the face of Pokemon.

what is that
that's no pikachu

what have they done
R

Toki767 said:
Is there a bomb or something inside? Doesn't that count as a mysterious package for authorities?
Click to expand...

Serious answer: They are supposed to be crossed arms

Not-as-serious-but-still-serious answer: I CAN'T UNSEE IT NOW
A

disappeared said:
That is one haggard-ass Pikachu.
Click to expand...

Pikachu has seen some shit.

We all live in a Pokemon world.
M

That's pretty cool even if the statue isn't the best looking. Gonna try to visit it before something happens to it.
S


wait why is already green if it just got placed there?

Well, it's an improvement over a hole in the ground with trash in it, at least.

I'm more disappointed it's not made of gold.
R

Pikachu needs to lay off the Budweiser.

Haha, please let them keep it there
R

Cool idea, but that thing is fugly.
F

Looks cool. I love that oxidized bronze look that old statues can get.
N

Why is it pulling the Pokkén/Heichachi pose?
P

did anyone else read this in the smash announcer's voice
B

This is a good thing.
N

Better than yet another murder as we are so apt to have down here.

Toki767 said:
Is there a bomb or something inside? Doesn't that count as a mysterious package for authorities?
Click to expand...

This is a very sad world we live, when something as harmless as a statue can be considered a threat.
You must log in or register to reply here.

How the far-right created a false flag event in Texas