PlayStation has new partnership with Discord, starting early next year

reinking said:
Wasn't it Discord that reached out to MS? Or was that board rumor BS?
Click to expand...

I believe Jeff grub was the source of that rumor. It makes you wonder if MS was willing to go to such great lengths to block Sony from having face chat for PlayStation, what else have they blocked? Maybe they’ve tried to block deals and games coming to PlayStation but Sony’s success was worth more than Microsoft’s money? I know this sounds fanboyish but maybe 30 years of proven success is worth more than buckets of cash and promises of brighter tomorrow from a company that outside of 2006 and 2007, really hasn’t had much success. I think once Ps5 crosses 10 million Microsoft’s wheeling and dealing is going to become that much harder, especially when series s/x is tracking worse than the Xbox one was.
Last edited: May 4, 2021
Reactions: Melchiah, Jacir, Unknown? and 4 others

longdi said:
what is the point of this tie up?

Your trolling right? You'd have to be retarded to not be trolling.
L

b...b....but nobody would deny that Microsoft warchest!!!!!
Last edited: May 4, 2021
Reactions: kyoji and Hawking Radiation

I've only joined a single Discord channel before, dedicated to Switch "stuff" and an entire section was for trap members to post pics of themselves.

Spitfire098 said:
Is Tom Warren going to be okay?
Click to expand...

Reactions: Spitfire098, Melchiah, Jacir and 8 others

Mr Moose said:
Phil baited Jim into a discord partnership, pretending they were going to buy them.
Well done, Phil.
Click to expand...

Being build into PS5 and becoming the default communication service makes them even more costly for the eventual 15 billion google sell.
Reactions: Bonsaibäumchen

Discord on PS? that would actually be bomb if well implemented.
Reactions: Bonsaibäumchen

Don't worry, he will have a new set of tweets tomorrow.

Reactions: FIREKNIGHT2029, Jacir, yurinka and 2 others

JLB said:
Xbox was never part of that deal, but Microsoft as a corp.
That was a potential buyout, this is a partnership.
Basically this thing is a typical oranges vs apples.
Click to expand...

Great move! Wonder if this restricts other platforms from doing the same. Discord is great to talk to the devs!
Reactions: Bonsaibäumchen

not until Discord supports 47 digit friend codes.
Reactions: a multicultural team of v and b6a6es

Yeah but they planning to go public.

Bloomberg said it and they were in talks but Discord decided to go public. When you go public then you need to generate money and lot of it. So expect ads and premium subscription and multiple deals
Reactions: DrAspirino
W

i already have my xbox acct linked with discord. I can see what my friends are playing thru the discord app and whatnot but its not really a big deal.
Reactions: DrAspirino

T-Cake said:
I feel like a luddite as I have no idea what Discord really is.
Click to expand...

Same. All I know is I was hoping for more integration with my console to play with my pc friends.

I've only joined a single Discord channel before, dedicated to Switch "stuff" and an entire section was for trap members to post pics of themselves.
Click to expand...

Do yourself a favor and join the gaf discord

Spitfire098 said:
Is Tom Warren going to be okay?
Click to expand...

Well that's not bad, I like this type of more symbiotic deals/partnerships.

Microsoft as always just want to buy them all, then proceed to destroy the acquisition.
Reactions: laynelane and Bonsaibäumchen

bentanchorbolt said:
What does this mean for the end user?
Click to expand...

That some PlayStation users in here won't boycott discord after all as evil Microsoft deal with Discord didn't go through.
Reactions: bentanchorbolt

well, having them integrated in PS voice seems neat. I guess MS and Nintendo could also do that and we would have decent cross platform chat. I like this investment better than buying them and force them into teams/skype.

I said when Microsoft pursued this, discord would be a massive get. I also remember the tweet about hack week that hinted api integration and Microsoft might be working closer together here: 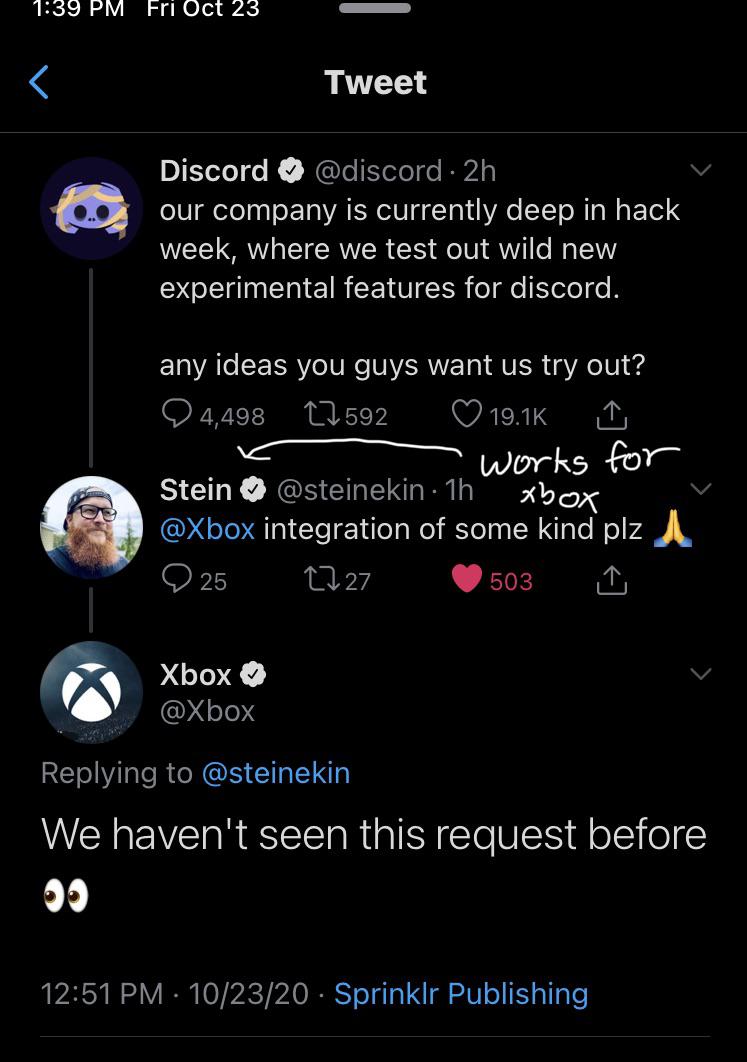 I think this goes beyond simple presence and account linking, purely because of the time frames we're talking about. I think this is also hinted at here:

Together, our teams are already hard at work connecting Discord with your social and gaming experience on PlayStation Network. Our goal is to bring the Discord and PlayStation experiences closer together on console and mobile starting early next year, allowing friends, groups, and communities to hang out, have fun, and communicate more easily while playing games together.

To bring these experiences to life for our players, Sony Interactive Entertainment has made a minority investment as part of Discord’s Series H round.
Click to expand...

It sounds as though Sony have approached Discord with a view to developing custom api's and they've been asked to stump up cash or incentivise. Obviously being a partner gets you a seat at the table and an input albeit minority) on future features, priority votes and enhancement requests. Bearing in mind, the custom bots you can program in Discord already via existing api's (like D2 for example) makes me think the bulk on the development here is on the Discord side (coupled with the lead time).

What it looks like is anyone's guess at the moment. Game base is pretty much not working how it's intended so I can see them moving all those features into discord which means Discord would need to integrate with the trusted api's for game invites etc. There will probably be a Sony skin on the top of it front end, and on the mobile app. It also aligns with all the web tech they've been changing to like the store etc. using APIs
D

Omg please bring a discord app to everything. Would be amazing for cross platform play.
Reactions: LucidFlux and Bonsaibäumchen
D

I don't use Discord myself, but I remember how people complained about Nintendo Switch's lack of communication apps and the need to link to a phone. Sony probably think more of their customers were going to use Discord anyway, so they are better off joining them instead of competing for no gain.
Reactions: Bonsaibäumchen

Wow this is pretty huge.

My Destiny 2 clan became fractured when cross save with PC launched and with cross play coming this year, having Discord native on the consoles will solve the communication issue. Fingers crossed my D2 friends on Xbox are able to partake as well.

Maybe they’ll have a change of heart and something to announce next year.
Reactions: DrAspirino
V

wolffy71 said:
i already have my xbox acct linked with discord. I can see what my friends are playing thru the discord app and whatnot but its not really a big deal.
Click to expand...

Why people are assuming the integration on PSN will be identical to current Xbox integration?

This is nice, Microsoft has a partnership of some sort since you can already link your Xbox to your discord as

ManaByte mentioned. Hopefully you can do the same with your PlayStation accountand ultimately stream from the two on discord, like you already can on steam and your phone.

I’m glad the deal fell through, Discord is good at where it’s at currently and a deal of acquisition would had all but push Sony away from any partnership with Discord.

Mr Moose said:
Phil baited Jim into a discord partnership, pretending they were going to buy them.
Well done, Phil.
Click to expand...

Bittermich said:
„Win“. lol as if anyone cares about discord. Most people don’t even what discord is outside of hardcore gamers.
Click to expand...

vkbest said:
Why people are assuming the integration on PSN will be identical to current Xbox integration?
Click to expand...

Because believing that this partnership and investment in the company may bring a broader and deeper integration may be detrimental to the human ego.

jonnyp said:
You were actually Meirl?

Not surprised
You must log in or register to reply here.

May 26, 2021 started IbizaPocholo
May 30, 2021
Redlight
2
Introducing the next generation of VR on PlayStation