Well probably be home before this gets there!

Those were the words teenager Scott McMurrys mom scrawled across the top of a postcard from Chicago in the summer of 1958.

She didnt know how right she was.

The postcard depicting the Shedd Aquarium finally arrived at McMurrys Virginia home on Tuesday  53 years after his mom mailed it.

Now the Shedd Aquarium has offered to give him a tour of the attraction his late parents visited more than half a century ago.

Hopefully Ill be able to come next week, he said. Im looking forward to it.

The postcard was addressed to Clairmont Ave. in Decatur, Ga.,  where McMurry grew up. But last week it showed up in Elizabeth Fulchers mailbox on Clairmont Lane in South Daytona, Fla.

Fulcher realized something was strange when she saw the 2 cent stamp in the top right corner.

She posted a picture of the postcard on Facebook, and her friends helped track down McMurry, a historian with the Justice Department.

Without the Internet, Id never have received it, McMurry said.

Just why the snail mail took so long to arrive remains a mystery, but an April 2012 Michigan postmark suggests it was recently mailed a second time, McMurry said.
Click to expand... 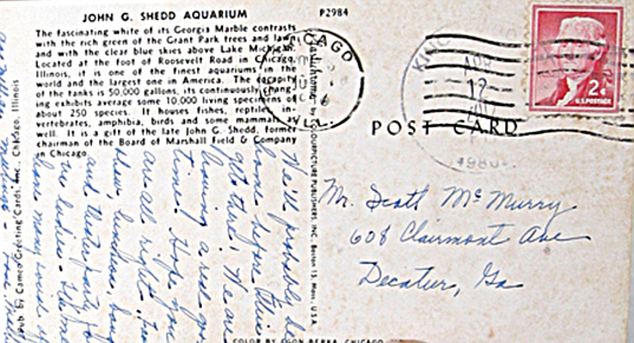 If you attached the postcard to an actual snail and let it go it'd get there in 2.8 years of nonstop travel, or 11.2 years of 6 hour traveling days
US postal System = Glacier mail
P

between a quark and a baryon

slopeslider said:
If you attached the postcard to an actual snail and let it go it'd get there in 2.8 years of nonstop travel, or 11.2 years of 6 hour traveling days
US postal System = Glacier mail
Click to expand...

It's cheap as hell though.

ssolitare said:
It's cheap as hell though.
Click to expand...

Not when you factor in the training.
A

That's just an awesome, and random, fucking gift though. Getting a card like that decades after your parents have passed away, reminding you of them and giving you a new memory to hold. And then getting offered a free tour by that aquarium.

It was also really cool that the recipient is apparently a historian, he'd probably appreciate it more.
K

That is incredibly awesome.
X

They should have used a Forever stamp...
O

Kind of depressing I'd imagine, assuming his mother is dead.

oatmeal said:
Kind of depressing I'd imagine, assuming his mother is dead.

Animal Crossing is real to me, damnmit!
H

Must be an incredibly shitty postal service if it manages to deliver it to the wrong address 53 years later.

Only one word on the postcard matches the address it was delivered to. One word. You don't make mistakes like that unless you're exceptionally inept.
R

Reminds me of BTTF for some reason
F 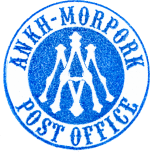 How could this even happen? Not just decades late, but also delivered to the wrong address. Shows dedication that they even bothered to deliver it instead of dumping it in a furnace but come on....
S

But why it take so long? Get to the bottom of this, damnit!
L

It says right in the OP that it was recently mailed a second time, meaning the postcard had probably been delivered to (or otherwise ended up with) the wrong person 53 years ago.
Z

empty vessel said:
Not when you factor in the training.
Click to expand...

That's not even close to what he was talking about and you know it.

Zaraki_Kenpachi said:
That's not even close to what he was talking about and you know it.
Click to expand...

Maybe some of the shit that I've sent that has been lost will turn up too.... 30 years after I'm dead.
G

Something similar happened to me recently, although not nearly on the same level. We ordered a book of stamps about a year ago but they never came. We were able to get a refund from the USPS at the time. Then, about a week ago, the stamps showed up. Free stamps!
T

You call it an aquarium, I call it a marine internment camp.


Maybe it's for the better that it's lost.
F

Why wouldn't they show a pic of the other side of the card, you know, the side that's actually worth taking a look at?
J

The private sector would have delivered this much faster.
T

Chicago's post office is notoriously slow/loses stuff for some reason.

Mail works perfectly 99.99% of the time everywhere else.