The Beard said:
Stop and frisk would reduce crime but so would random searches of people's homes, and cars without warrants.

Where do we draw the line?
Click to expand...

Actually surprised there was not much immigration or refugee talk. Guess that's coming later on.
K

I have a son, he has computers
S

The Beard said:
Stop and frisk would reduce crime but so would random searches of people's homes, and cars without warrants.

Where do we draw the line?
Click to expand...

TRUMP STATEMENT: So Ford is leaving. Their small car division is leaving. Thousands of jobs leaving Michigan. Leaving Ohio. Theyre all leaving, and we cant allow it to happen anymore.

FACT CHECK: Their small car division is leaving  This part is true, but Ford says it will affect zero U.S. jobs.

Over the next two to three years, we will have migrated all of our small-car production to Mexico and out of the United States, said Ford Motors CEO Mark Fields, at a daylong investor conference in Dearborn, Michigan, according to the Detroit Free Press.

But this will, according to Fields, not result in any job loss in the U.S. Earlier this month, on Sept. 15, 2016, CNNs Poppy Harlow asked Fields, So it is not true that Ford will be, quote, firing all of its employees in the United States? Will Ford cut any U.S. jobs as a result of this move? One? Any single one?
Click to expand...

You know trump supporters on 4chin and such band together to influence polls like this.
R

kingocfs said:
The candidate with no stamina is already back on the stump.
Click to expand...

She realized the folly about keeping your shield up all the time and equipped the green grass shield.
O

psaman17 said:
She left Nintendo after E3 and worked for a Mexican Chain and you didn't think that E3 performance did her in?
Click to expand...

Now you're just making a story up.

Dude, you need to stop.
B

This is absolutely tremendous.
S

CNN straw poll of debate watchers (noted to be more Clinton-friendly): 62-27 in favour of Hillary.
H

captive said:
the only thing i wish happened is Hillary calling him out on jobs going overseas when all his clothes are made overseas. I SO wish she had done this.


also its hilarious him whining about negative ads.
Click to expand...

He just would have said that it's good business, which was his response to every other business charge thrown at him.
D

So how has the media reaction been? Wasn't worried about her at the debate., but that Trump would dominate headlines after.
F

Goddamn. This is just fantastic!
E

Was it just me or did trump seem almost hunched over at times? Watching him sputter at Hilary as he bent over and twisted was a brutal visual
K

If she losses I know she did her best. She did good.
B

that shit should be 100-0, Trump got slaughtered

lastflowers said:
same pretty much. Not that I agreed with what he said at all, it was just that Hillary was losing by talking. Then she didn't really change much but he became himself and lost all on his own. I think that should be her blueprint for the rest of the debates. Let the man dig his own grave.
Click to expand...

Yeah I am not sure I have agreed with anything he has ever said. I was shitting my pants for the first 20 minutes but Hillary obviously prepared and turned the tables and let him dig his own grave.

I thought she got stronger though as the debate went on. He was so weak on almost everything after the first 20 minutes.

DangerMouse said:
So right. Let alone for a presidential candidate.
Click to expand...

That's the part that kills me. He keeps saying how he cares about people and is a presidential candidate who is supposed to sympathize with people and he says that shit. Fuck off, Donald.
P

hopped on the_donald for amusement sake. They have a megathread with links to every major website poll out there about who won the debate, asking his legion of shitheels to go out and vote Trump.

Any reader poll is going to be intensely biased by the angry white male sub-30 troll community for a while.
G 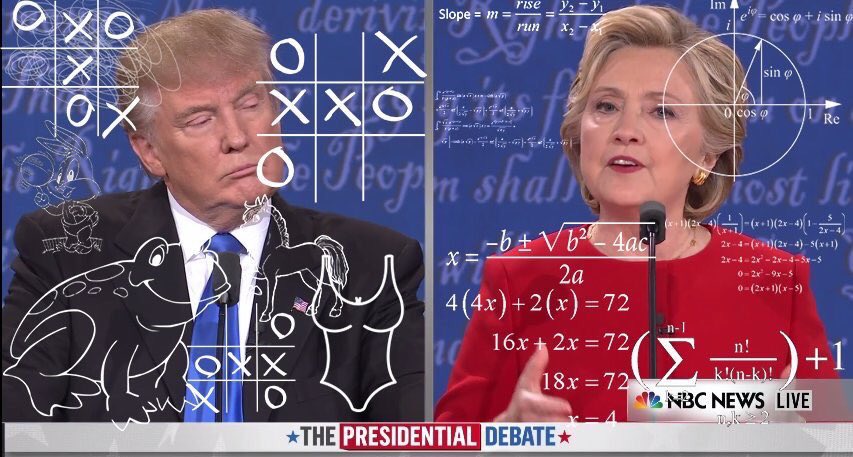 DrForester said:
So how has the media reaction been? Wasn't worried about her at the debate., but that Trump would dominate headlines after.
Click to expand...

Trump's Campaign is in damage control, everyone is saying she won handily.
V

I knew this was coming. It's what perfectly describes how all his shit gets overlooked. Too much shit at once to focus on and dig any deeper on it.
C

Badenergytroll said:
Why are alot of online user polls saying that trump won?
Click to expand...

It was right in the beginning of is unhinging but remember his answers to dealing with race relations in America was incarcerate more minorities and expand stop and frisk federally. I knew at that moment he had been completely thrown off by the tax and birther questions.
P

Already been linked to /pol/ and the_donald. Don't take it too seriously, scientific polls of likely voters are the only ones that matter.
Y

I don't think people who are looking at online polls have any idea how powerful the alt-right online troll brigade is.
D

DrForester said:
So how has the media reaction been? Wasn't worried about her at the debate., but that Trump would dominate headlines after.
Click to expand...

Let him dominate the headlines. He was that shit.
S

the_batman said:
You know trump supporters on 4chin and such band together to influence polls like this.
Click to expand...

Glass Joe said:
I'd say he was "rattled" but did not become "unhinged." IMO Hillary didn't knock him out. But she won.
Click to expand...

He babbled throughout the entire latter 2/3 of the debate. How is that not unhinged? Nobody understood a goddamn thing he was talking about. He has to WIN over more people. The numbers he is carrying are not enough to win the election. All he did today was reinforce that Trump is Trump. To some people, that's a good thing, but to an overwhelming group (60% think he has a poor temperament, you think tonight changed their mind?) he is questionable at best, a jackass at worst. He did zero to grow his base tonight, and with about a month and a half to go, that's a KO. He's not going to get many more opportunities to do that, like I said, barring a Hilary fuck up. Hillary just needs to coast these last 2 rounds and let it go to the score cards, essentially. Trump needs a knockout to win.
R

Kurdel said:
If she can't handle her husband, how can she handle a country?

Wouldn't be surprised if that's his reasoning.


Felix Lighter said:
I'm sure she prepared for it to the point that it would be a welcome topic. It would have been a disaster for him.
Click to expand...

Oh, without a doubt. I dont think he would've been able to recover from that.
J

They saying more Trump supports didnt watch the debate, I hope they dont vote either
K

Link? I searched and found this:

Campaign says the plan is to hit the Mariott rally across the street.
Click to expand...

bionic77 said:
For the first 20 minutes he was actually making points and I thought he was staying even or slightly beating her.

Then the Trump took over. He just could not shut the fuck up and went for any bait like a shark goes after chum. It seemed to get worse and worse for him.
Click to expand...

This is exactly how i perceived. Then he self immolated with the temperament thing and she delivered a decisive blow. He was broken and she was on a roll after that.
P

ShockingAlberto said:
Considering she left two years later and also the fact that I know the E3 performance didn't do her in and you are just making things up, yes.
Click to expand...

Google Cammie Dunaway and look at the first 6,7 links and see how much people irrationally hated her.

She left Nintendo at their peak and joined a fuking Mexican Chain.
S

opt-in internet polls aren't real whether they say your side is winning or losing; rely on the many many many many many scientifically sampled polls or focus groups for post-debate reaction instead.
P

I was slightly worried at the start because Trump, to his credit, came out a little strong.

By the 20 minute mark though that had all fallen apart and he was getting tilted hard. His answers made no sense and he rambled a lot.
P

No one forget that the fraternal order of police are backing Trump.
S

psaman17 said:
She left Nintendo after E3 and worked for a Mexican Chain and you didn't think that E3 performance did her in?
Click to expand...

I see I may need to post Herp Derp dog again, in light of such herpa derpery.

Clinton said black men get jailed for things on which white men skate.

Trump bragged about doing what Wesley Snipes went to jail for doing.​
C

Did they do it randomly or just for people watching CNN?
B

For someone who loves to brag about power vacuums he could see a mile away, he'll just drop out of NATO because they're not tremendous.


ShockingAlberto said:
A friend asked me if braggadocious is real

It is, it's informal and not often used, but it's real.
Click to expand...

Oh man I guess I got schooled by trump

Put me on suicide watch
N

And right on cue CNN's poll of debate watchers has it 67% think HIllary won. If that's not a KO I don't know what is. Tonight was a very, very, very bad night for the Donald.
Y

Because the_donald is brigading it.
L

This assumes that Ford shouldn't build the Small Car plant in America. Then there would be a large net positive job impact in America.

To be fair they said it was a sample audience that skewed more democratic, but still a lop-sided result.