CamHostage said:
For sure PC and PS4/PS5, then the official line so far is "consoles" and I don't think it goes beyond that yet? Nexon has had a good relationship with Xbox in the past (KartRiders was an exclusive even) so I think One/Series is likely. And then somebody also listed Switch, but I don't see where they got that from, seems that's just residue from the consoles listing.

Maybe, but THIS really reminds me of Deep Down... 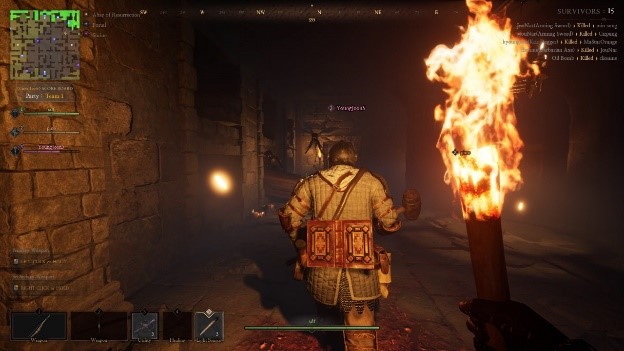 That's "P3", an unnamed project that Nexon announced at a recent show. There's not a lot of info, but it's the type of multiplayer dungeon crawler (down to the boxy corridor/room layout of stages, I assume randomly generated?) that Deep Down was going to be (although I think P3 may be deathmatch-oriented?) Their fire tech is not looking as good in this shot as Deep Down obviously, but like you hinted at, Nexon's graphic system is playing with a lot of what made Deep Down look so good (purposeful material shaders and careful depth of field management and all that fun stuff.)

I think we're going to see a lot of Deep Down reminders this gen? The tech Capcom was exploring was promising, but from what I understand, the limitations were prevalent and the actual game they were making was never going to live up to imaginations. They supposedly pilfered what made sense from the Panta Rhei for RE Engine, and you could see lots of pieces of what they were working on for that engine elsewhere, but to get the full thing all at once and to get it in something more rich than a dungeon crawler, it seems like they needed better hardware. And now, we have better hardware.
Click to expand...

Always a shame about the Panty Raid Engine.
Reactions: CamHostage

Wonder if this means to expect it on Thursday?

F2P means it will be packed full of microtransactions. No thanks.

Project Magnum is a looter-shooter, but not a whole lot of the looting has been shown as of yet. Korean developers have continually shown a penchant for delivering great live-service RPGs and developer NAT Games has already worked on titles from the same genre.

What makes this possibility so endearing, is the inherent simplicity within the game's mechanics. Of course, that's just speaking from outside based on what's known - but Project Magnum could be one of the more mechanically sound games in this genre. Sure, games like Borderlands are also easy to get into and roughly fall under the same bracket as well, but we can all agree that the industry and the genre have the place for games like Project Magnum.

Project Magnum is NAT Games' foray into AAA development, with this project easily being their most ambitious since its forgoing mobile platforms in favor of the more powerful consoles. The studio's output has been fairly consistent, albeit quite similar. Its upcoming game has a lot to live up to, now that more eyes than ever are set on Project Magnum.
Click to expand...