This sounds truly horrible. And while Im definitely no expert in law, this sounds like it is highly illegal.

This is what happens when you pledge on kickstarter with only artwork ...

Whether it's true or not, donating on Kickstarter is a good idea only like 5% of the time. Those are bad odds. Stop playing bad odds.

Grinchy said:
Whether it's true or not, donating on Kickstarter is a good idea only like 5% of the time. Those are bad odds. Stop playing bad odds.
Click to expand...

eh? i have a 100% success ratio. it's not bad odds if you ensure you invest in things you want that appear reasonable.

just because some investments might fail doesn't make investing a bad idea.

Yeah, I foolishly backed this. Gave up on ever seeing anything out of it months ago.

wow, that is some shady business

autoduelist said:
eh? i have a 100% success ratio. it's not bad odds if you ensure you invest in things you want that appear reasonable.

I haven't had quite that good of a record -- still waiting on some projects that are extremely late like That Which Sleeps, and Yatagarasu never got the promised GGPO -- but I agree there's no way any reasonable person is going to fail 95% of the time in choosing a Kickstarter. I have no idea how you could even do that.

Obviously this scam is unfortunate.
A

TINY METAL Programmer about 2 hours ago
Calm down guys, we had an ex-employee who it turns out has made a career of sweet-talking his way into jobs he is not qualified for. After causing months of pain for everyone in the office we bit the bullet and bought out his contract. Afterwards I heard from people he worked with in past companies that he has been fired from about 5-7 game companies so far.
After he was let go with a generous severance package (about 3 months salary, money he did not earn by any definition of the word). He then turned around and stopped paying his rent thus trying to extract more money from us. So when he claims Project Phoenix money was used in TINY METAL keep in mind the truth is everyone except him has worked hard and at times with zero pay to be able to get investment for TINY METAL for the exact reason that we never used Project Phoenix money for TINY METAL. In fact other employees lent him money and had their own paychecks delayed so he could be paid on time.
Likewise when he writes "I left" the truth is "I was fired 3 months ago and am only writing these lies now because I want the company I barely contributed to, to pay my rent while I go on holidays to America with my severance package instead of paying the rent I owe".
Click to expand...

Is it normal for companies to slam someone that personally? Usually they say disgruntled employee... or we are looking into the matter... etc..... Maybe Im just misreading this though..
B

kaydigi said:
Is it normal for companies to slam someone that personally? Usually they say disgruntled employee... or we are looking into the matter... etc..... Maybe Im just misreading this though..
Click to expand...

The explanation makes zero sense. Why would a former disgruntled employee with a fairly long track record and good relationships in the industry risk exposing this if it was false? How does the former employee not paying rent prove anything?

Isn't it far more likely that what the employee said happened is accurate, particularly since literally zero visible progress has been made on this game in four years? I mean whoever is running the project has resorted to re-using assets that were presented years ago and calling them "new". Even the project creator posted this past week that he was counting on Tiny Metal to convince investors to back Project Phoenix. Considering many times the estimated budget was raised in the campaign, it doesn't make sense that investor funds would be needed to move forward, unless the campaign funds were squandered or spent on something else, like a different game.

From my perspective as a backer, it's pretty clear now that this was indeed a scam and that the game will never be made. Hopefully nobody else, including outside investors, loses any more money into this sinkhole.
J

When I see those things, I'd never let my sons do game programming in the future.
In this industry, you'll never know if after 1 2 years, you still will be there.

Wow! Those are some nasty accusations from both parts.
H

That seems really unproffessional and highly insidious. If they are in the right, that is still an incredibly lowly way of handling the situation.
A

Thank you! I am now!

Only time will tell if this is true or not. If the game gets made or doesn't get made, we'll know the truth.

I'm always skeptical about kickstarters.
A

This is some fantastic drama.

Crowdfunding is such an absolute shitshow

Well, there goes my(and a lot of other folks as well) money

This update on the Phoenix Kickstarter lends some credence to the allegation.
https://www.kickstarter.com/project...apans-indie-rpg-feat-aaa-talent/posts/1964299

Man.. some people are really naive. There was nothing here to back but artwork. Seeing so many "can't wait for the game" comments is depressing.

also lol @ him trying to brown nose the other site. Funny part is, they'll probably eat it up.
Z

4 years and not a single screenshot for a game that has a release date of 2015? If this isn't a scam, I don't know what is.

Yes I totally believe this company's response given that they have literally nothing to show for years of development other than a completely different game.
K

My policy of not putting down a cent till the game is in my hands seems to be working.

I'm really tempted to believe this claim from a 'disgruntled ex-employee.' There has been rumours for years that this kickstarter has been fudged and each time an accusation is made, the creator puts out an update with an 'apology' that usually includes some concept art or something etc.

Just to show I supported this project: 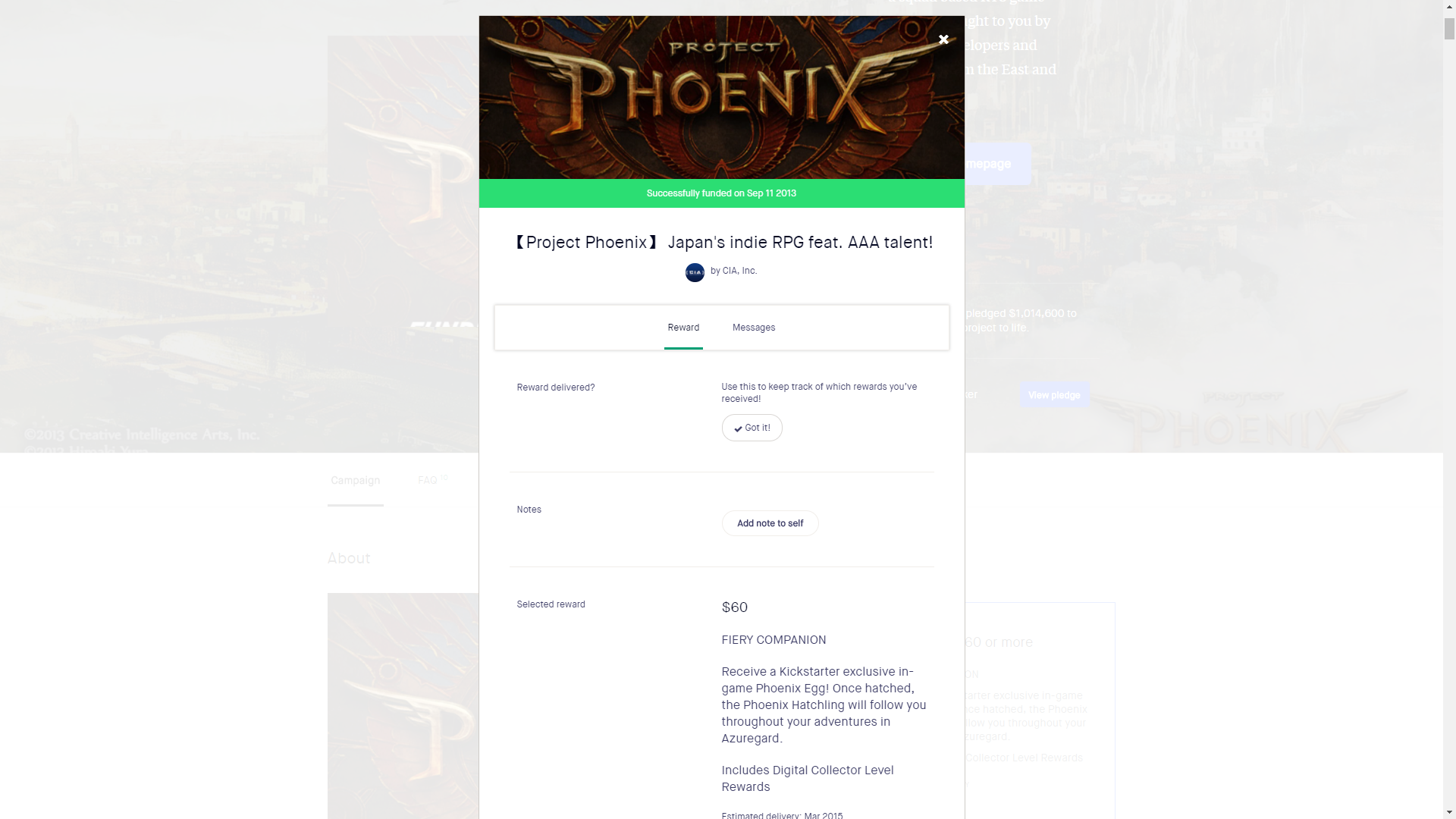 I sank $60 dollars into this when it was funded over FOUR years ago now. Since then the team has been through major revisions, they've told us all about these other projects staff are committed too and asked us to check them out etc. 145 updates later and we are nowhere near any kind of deliverable target or product. I've just accepted that I lost my money and no game will ever come out.

Something has happened here and it really needs to be investigated. Especially when the kick starter creator is making comments like this in his updates:

"I'm sorry this update is a little rough, I've been working around the clock but I really had to get this update out. Feel free to comment about the game, leave feedback and I'll try and get back to everyone as much as I can. And I'll just ask one more time, please, don't beat me up this update. I'm almost at my breaking point."
0
I legitimately believe this project is dead and gone. There's no point in denying it further.

Jesus christ, have you seen this comment? I guess they just want to piss everyone off. I don't want to go to old topics that have been and gone, I just think it's pretty bad to make a comment like that in regards to a situation they are no part of.

FF:Enhanced_Reality said:
Jesus christ, have you seen this comment? I guess they just want to piss everyone off. I don't want to go to old topics that have been and gone, I just think it's pretty bad to make a comment like that in regards to a situation they are no part of.
Click to expand...

What the fuck? Jesus this man is pandering to an unknown degree, and I honestly don't understand why he even brought up this?
H

Deflecting. I think the truth about this project is coming out. Using the recent commotion from GAF to re-direct the topic of conversation away from the big con that was this Kickstarter.

Well is this outcome better or is something like the mess of Mighty Number 9 better? They're both terrible, but maybe a different game is better than no game or a crappy mess of a game, at least from a zeitgeist perspective (since the backers are hosed either way).

It's all very fishy, I also backed them up (their really cool "promise" of a game got me, sadly I looked over the flaws (seggregated dev team, unknown director etc) )
And with the last backer update, it makes everything all more confusing. But whatever, it's a kickstarter and it could fail too, sadly it felt indeed as a scam specially with the Tiny Metal thing
C

RIP, to the wallets of those involved. I was really interested in Tiny Metal, I didn't know about this project so unfortunately I might not pick it up. I havent had a bad time with crowd funding yet, but I am very particular currently waiting to see how Re:Legend falls through,
D

Count me in among the duped. Well, $60 is not a big deal but of course it stinks that I was scammed by a con artist.

Of note, I backed a few more game projects and so far all of them have resulted in a game. Granted, more than half of them turned out mediocre but the people involved all delivered a game as promised.

Because their Project Phoenix scam thread is 6 pages long at the moment and two members mentioned they know Lacy.
You must log in or register to reply here.