At Santa Monica Studio, one our guiding phrases is “we’re fans of our fans.” Whether it’s a reaction to a trailer, a deep-dive lore video, or cosplay – knowing that there is an audience that appreciates all the details in our work motivates us to create something worthy of God of War fans.

Cosplayers are a huge part of our community and have been since the very first game released in 2005. Over many years we’ve seen how much time, love, and dedication it takes to create a single character. God of War characters especially have many different materials, layers, and details to account for. One thing we’ve learned is that the best starting block for any cosplayer is a good reference of the character they’re portraying!

With that in mind, we are really excited to finally be able to debut the brand-new Official God of War Ragnarök Cosplay Guides for Kratos and Atreus.

Once you’ve taken a peek at the new guides, make sure you check out the interview below with Santa Monica Studio Art Director Raf Grassetti on how the team updated the designs of Kratos and Atreus in God of War Ragnarök!

To show our appreciation for all the God of War cosplayers who have taken on Kratos and Atreus over the years, we wanted to make their updated guides for God of War Ragnarök even more comprehensive than the ones we did for God of War (2018).

We’re worked with our fantastic character artists and writers at SMS, as well as B is for Boy artist Romina Tempest, to create guides that not only give the in-depth references necessary for cosplayers, but also let us play more in the world of God of War by looking at these designs through the lens of our characters. 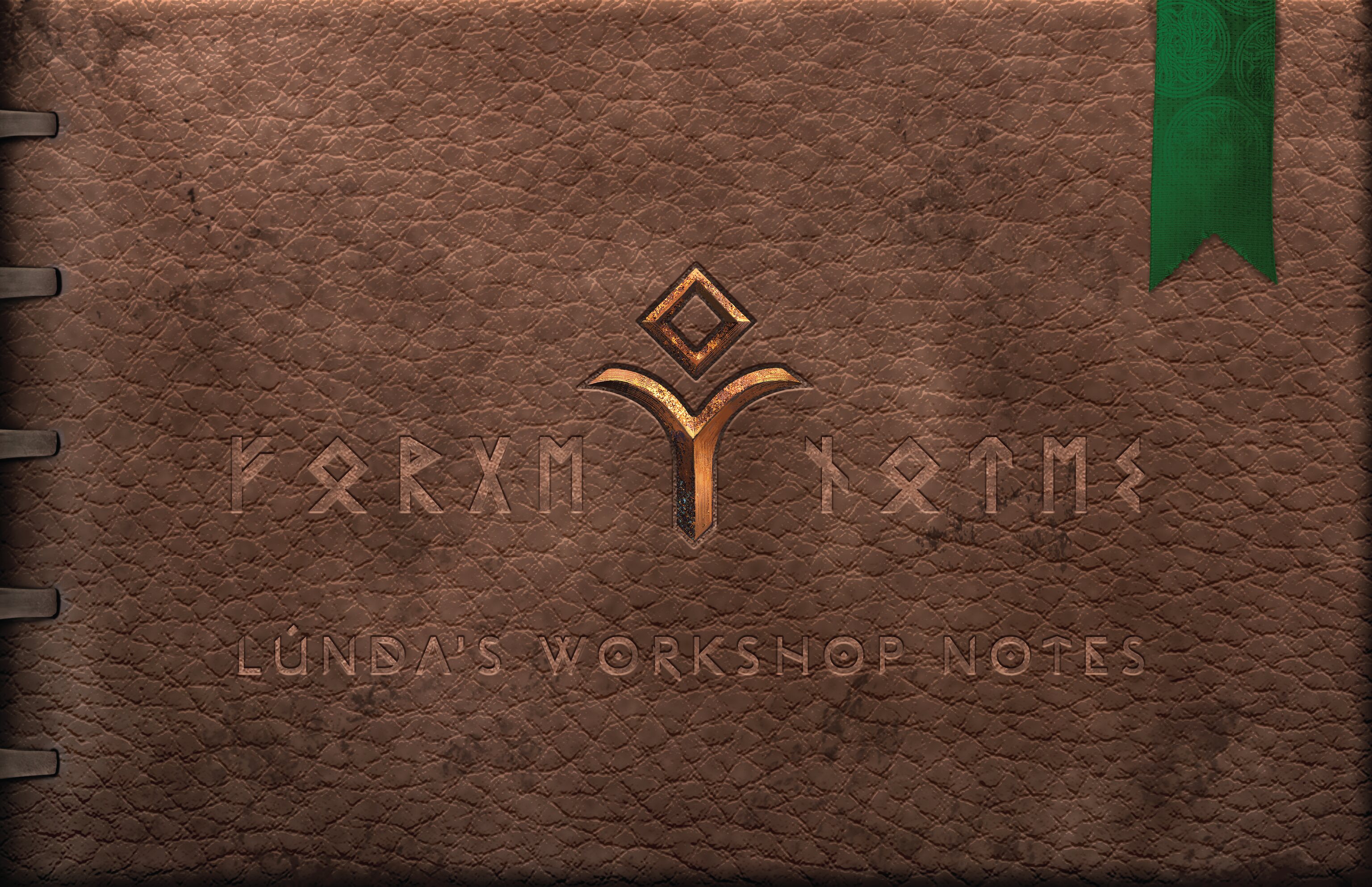 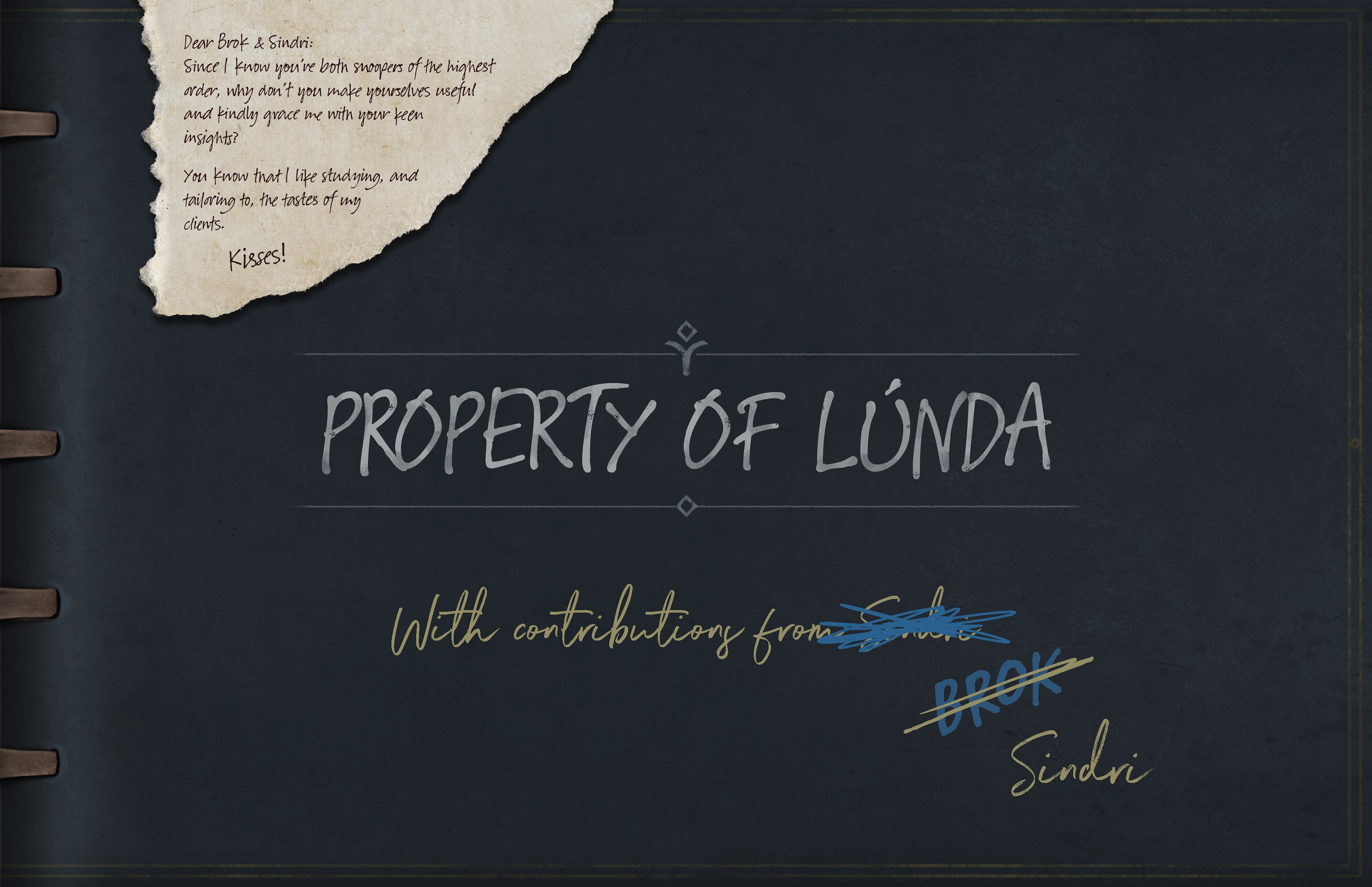 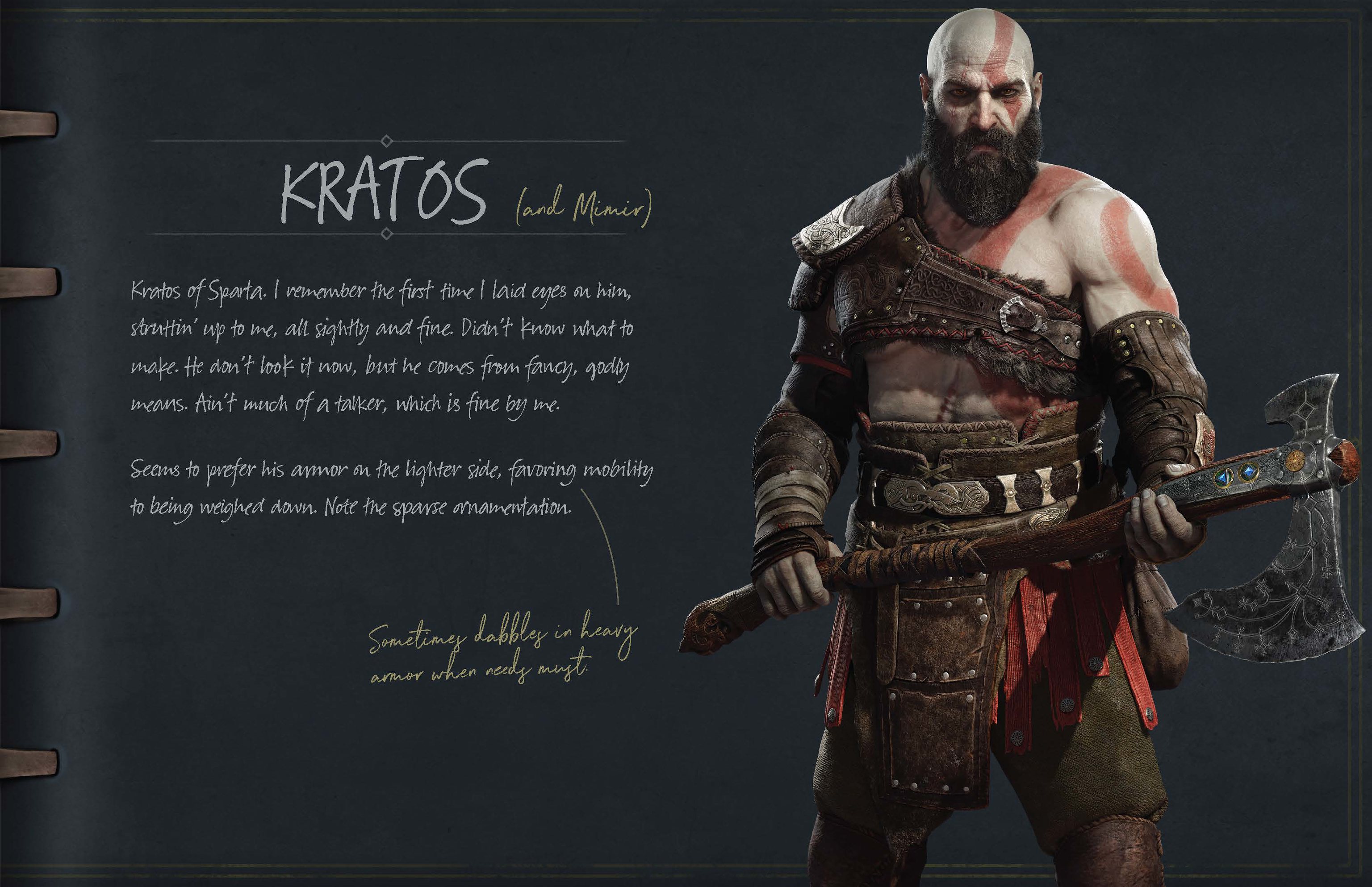 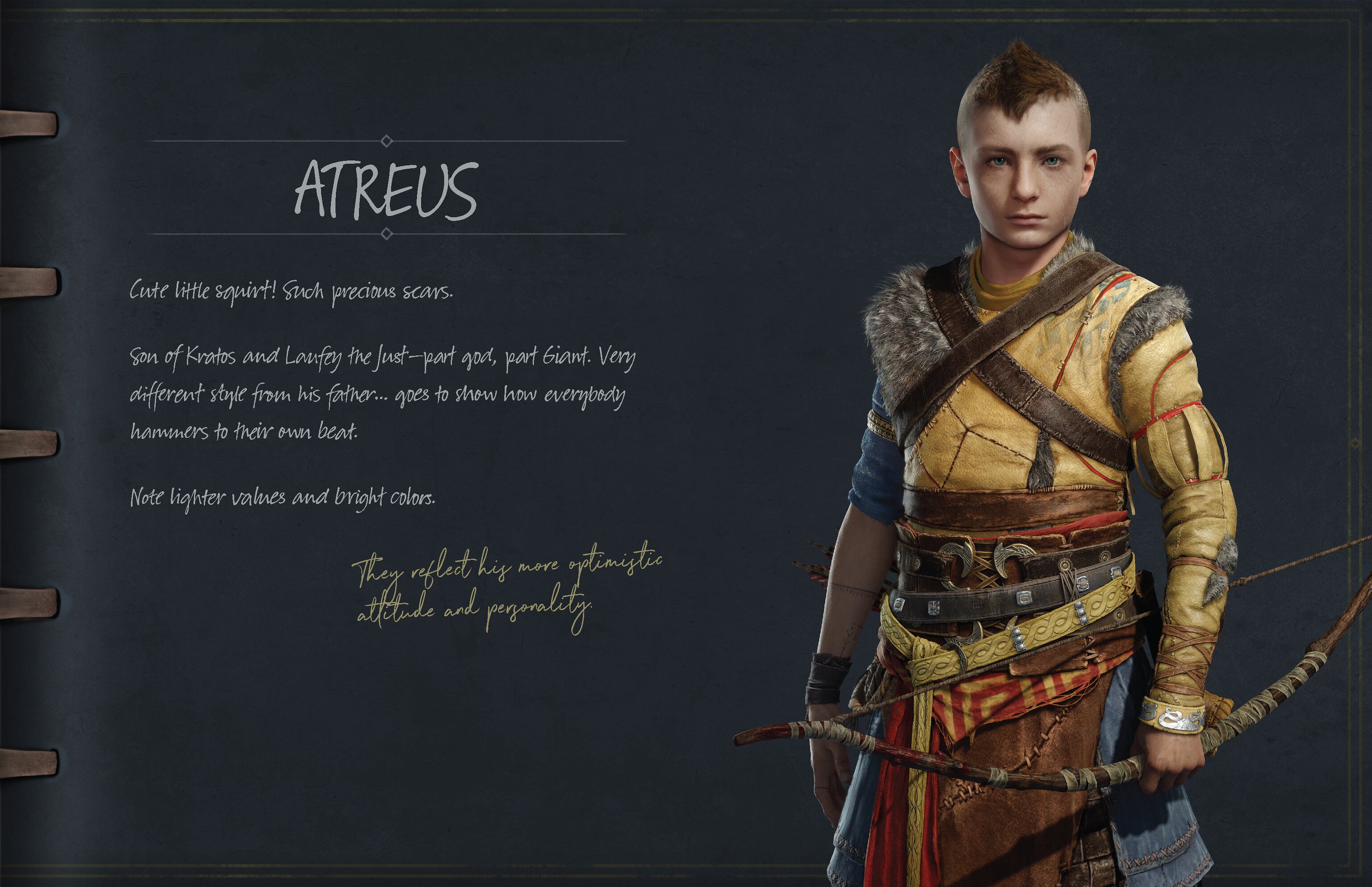 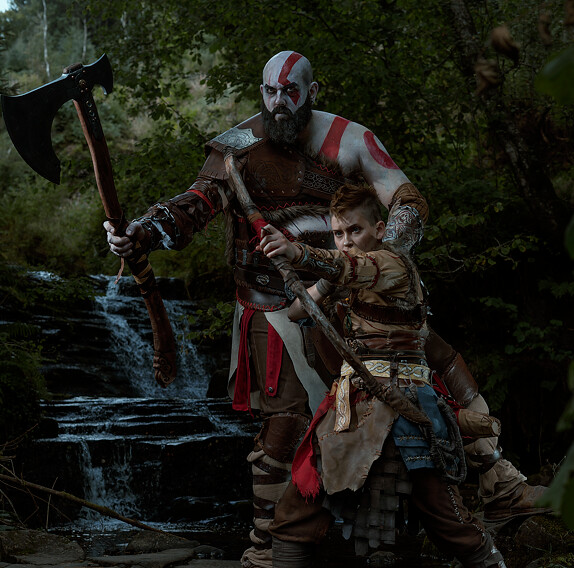 While we know visual references are key, we also wanted to bring in the expertise of two of our community cosplayers to provide how-to resources and tips they put together while making the cosplays themselves! 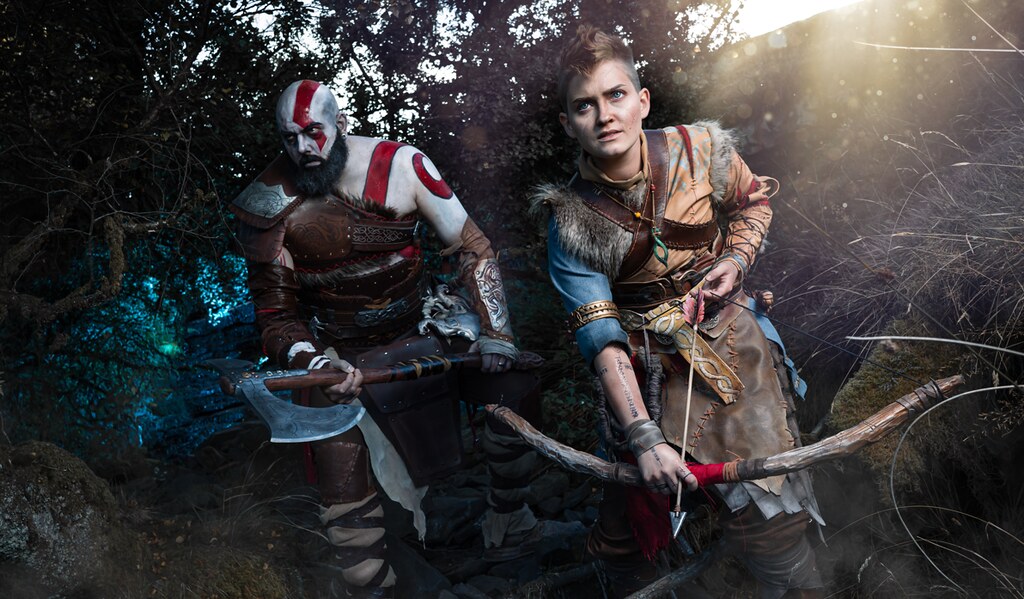 We’re thrilled to have partnered with Opal Ink Cosplay (Atreus) and Jonny Mathers – Baldsasquatch (Kratos), who both did fantastic versions of Kratos and Atreus back in 2018.

They have put together a wealth of resources for cosplayers to reference alongside the official cosplay guides, not to mention they’ll be releasing videos documenting key parts of their creation process on their own channels.

The new designs for Kratos and Atreus you’ve seen for God of War Ragnarök are a culmination many months of iteration among the talented character and concept artists here at Santa Monica Studio. Atreus especially posed a unique challenge and opportunity for us with several years having passed since the last game.

To discuss the Fimbulwinter-ready looks of our heroes in God of War Ragnarök, Art Director Raf Grassetti walked us through some of the key choices that were made along the way.

Grace Orlady: Let’s start at the beginning with the early development phase of God of War Ragnarök. When you found out there was going to be a time-skip for the characters between the games – what first went through your head in terms of what that meant for Kratos and Atreus’ visual looks?

Raf Grassetti: It was amazing to revisit our heroes and design their costumes thinking about what they have been going through since we last saw them. Since we knew they were training on their own and without the help of the Huldra Brothers, we went back to more simple and iconic costumes, from the way they would have made their own armor.

You can see that reflected in the way things are stitched, the choice of materials, and being more thoughtful on how they are surviving the extreme weather conditions. 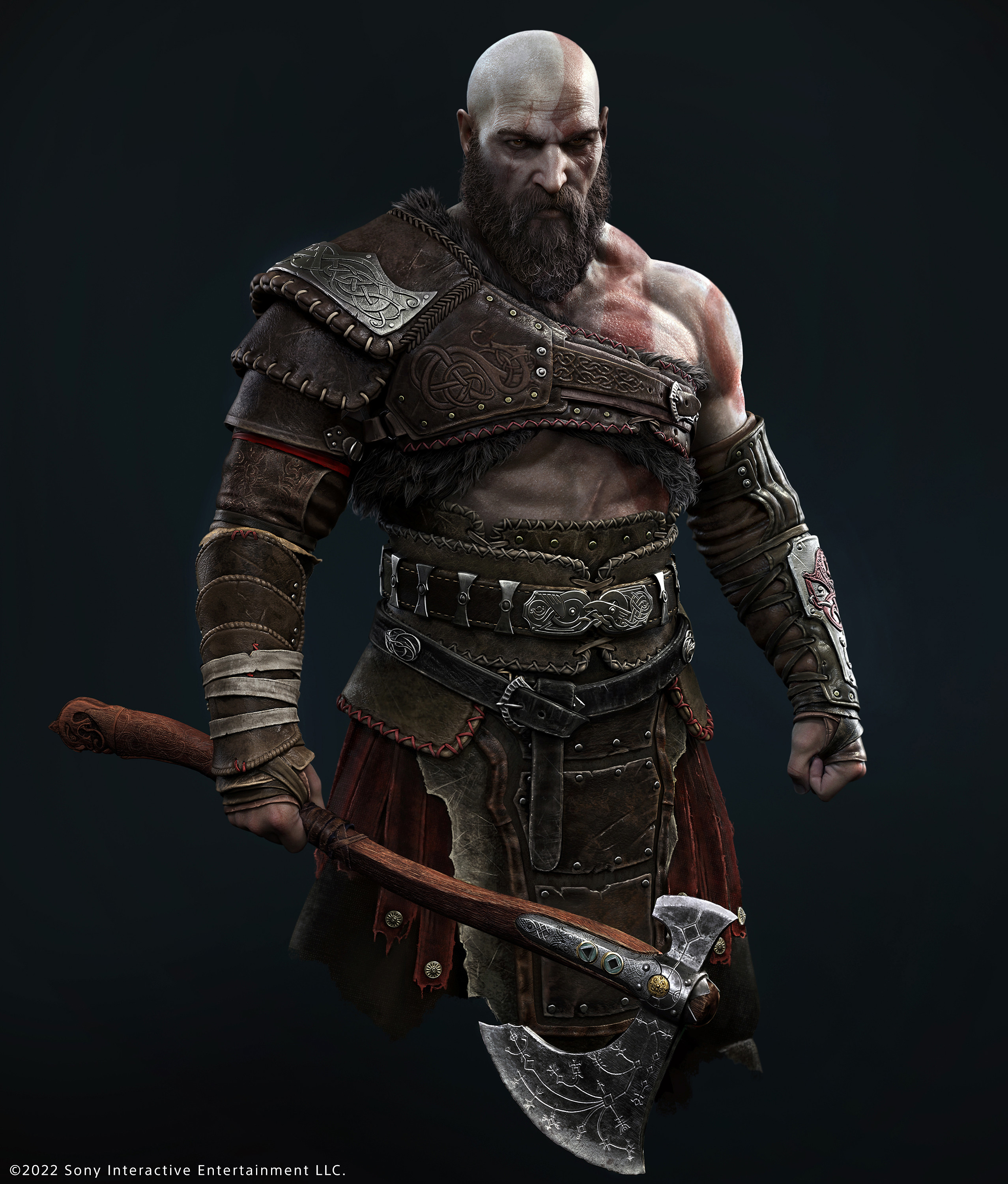 We’ve established that God of War Ragnarök begins during the event of Fimbulwinter. Midgard, where Kratos and Atreus live, looks to be covered in snow and ice. How did that influence the design choices the team?

We incorporated a lot of elements to illustrate the characters journey from the end of God of War (2018) to the beginning of God of War Ragnarök. The cold weather was definitely a very important factor, you can see on Atreus’ costume, for example, the inverted pelt to protect him from the cold and Kratos using a bear pelt as well. 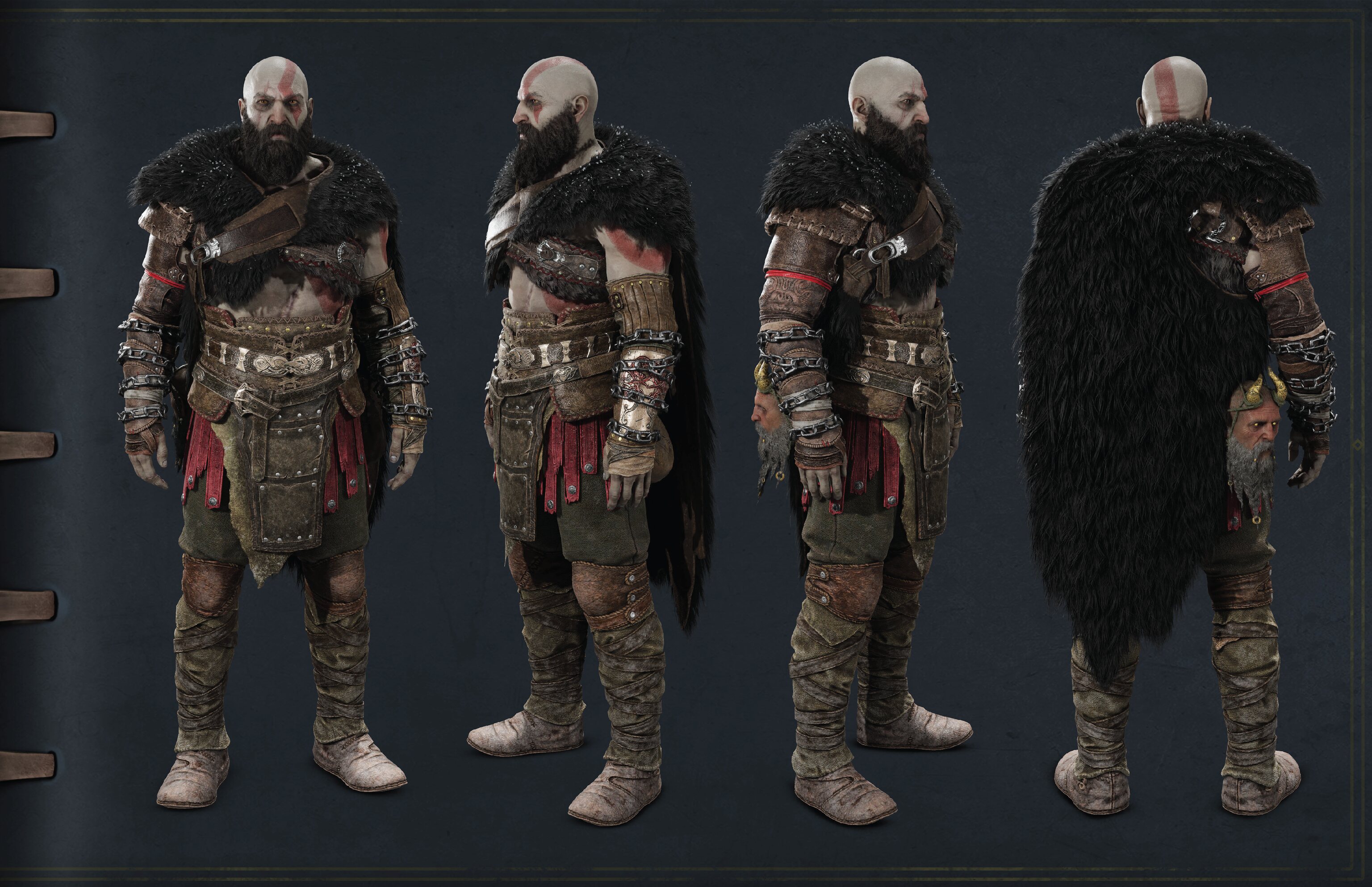 In God of War (2018), the team significantly changed Kratos’ look to match the new setting while still maintaining the iconic elements of the character that make him instantly recognizable.

With the Norse era Kratos design now established in players’ minds, what considerations or challenges did you face with updating his look for God of War Ragnarök?

Since God of War Ragnarök is a sequel, we knew we didn’t want to completely change Kratos, a lot of the choices made were to update his look to reflect the new setting. We decided to preserve his right pauldron and keep his iconic tattoos visible.

Even though Kratos looks similar to the version of him in God of War (2018), his 3D model was completely re-done to improve quality for the PS5, all detail maps and costumes were made from scratch. 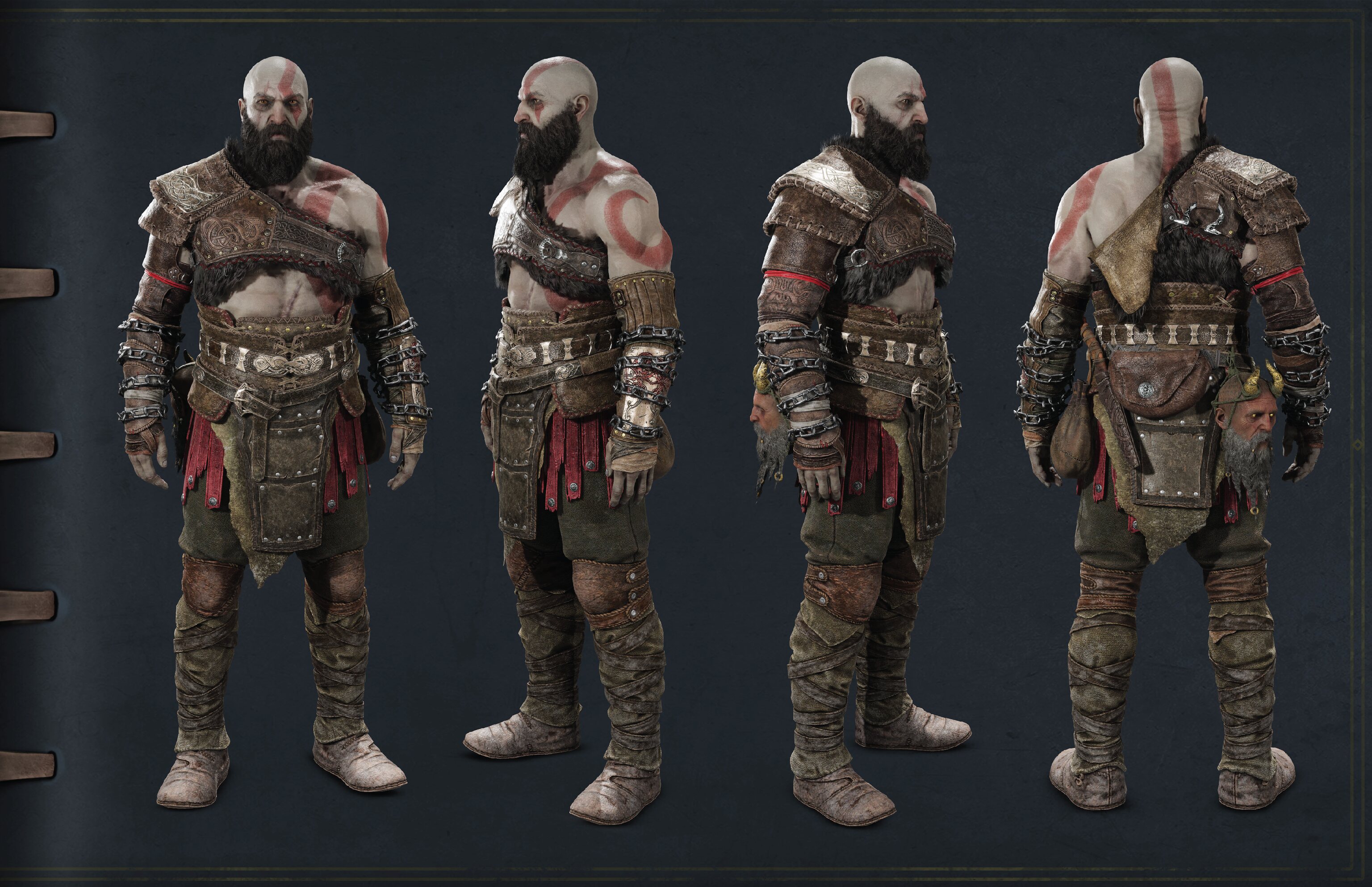 When it comes to visual storytelling, what aspects of Kratos’ character are most important to convey through his design and how did you do so?

Kratos has been through a lot and his design always reflects that. He cares about function more than visuals, so a lot of the decisions made on his design serve a practical purpose. Several pieces are there based on their utility in battle, for example, the pauldron with metal pieces protects his dominant arm and the bracers can be used to shield him if necessary.

We also include touches of his past, such as the red Spartan skirt material, that are reminders of where he has come from. All the design elements together are deliberately chosen to make Kratos believable as a character.

Is there any aspect of Kratos’ design for God of War Ragnarök that you are especially proud of or want players to notice?

At the end of God of War (2018), Kratos removes his bandages and sets them free into the winds of Jötunheim, revealing his scars to Atreus. That was such a powerful moment for the character, so we decided to put a piece of the bandages that Kratos kept at his home on his new gear as a visual callback. On his right bracer, you can see him using them to keep the armor together. 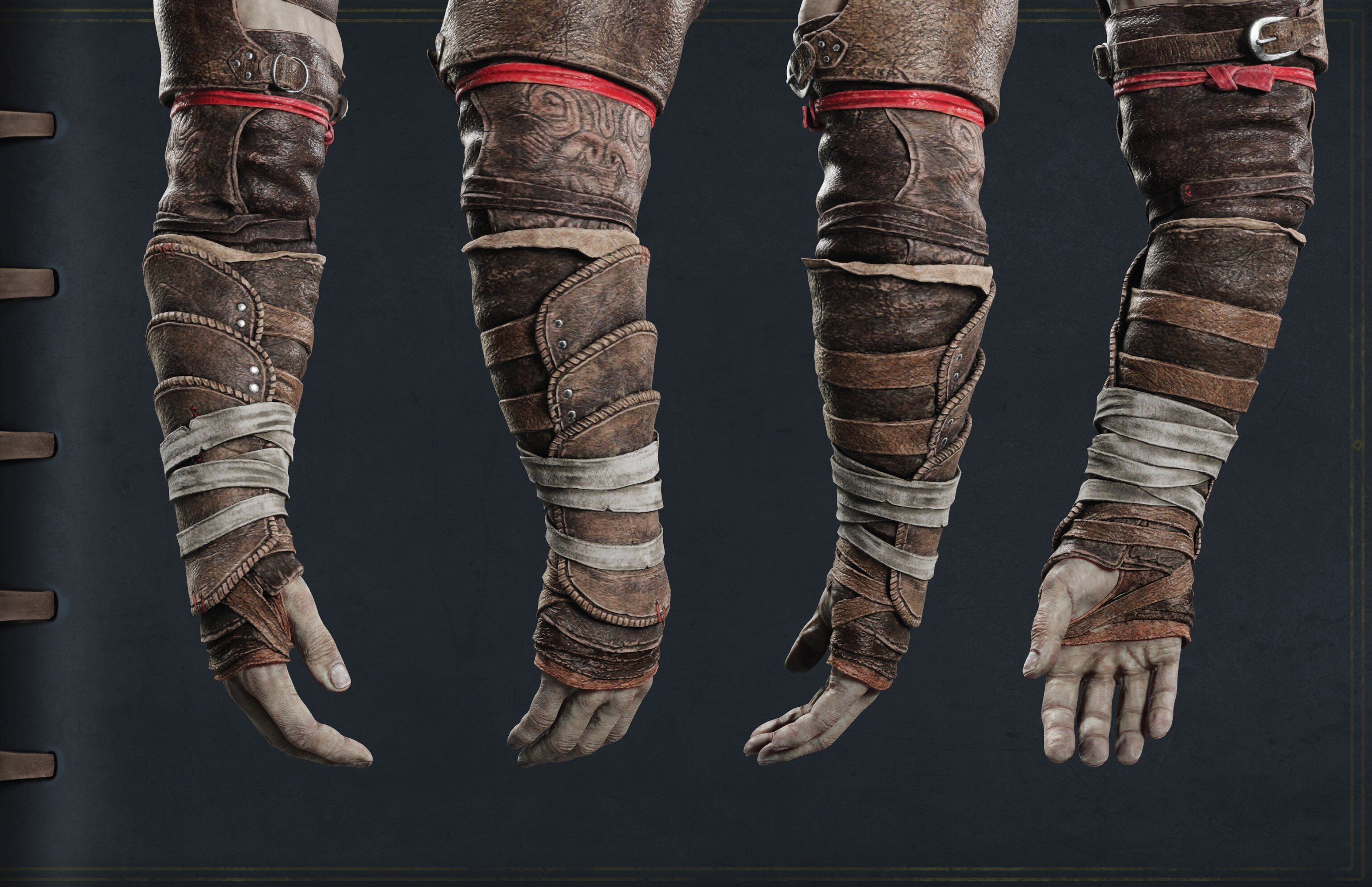 Enough of the dad, let’s get to the son! Atreus has hit a growth-spurt or five since God of War (2018), he’s obviously had a few birthdays and got some new digs since we last saw him. Can you take us through how that initial design brainstorm for older Atreus went?

Atreus is always so much fun to work on, being able to collaborate with the writers and see the character grow gives us much to play with as artists and reflect those choices in his look.

More than on Kratos, we knew that the training would have a big impact on him, so he needed to have better gear to protect himself. With Atreus, we can also play a bit more with design elements just for visual interest and make him look cool. 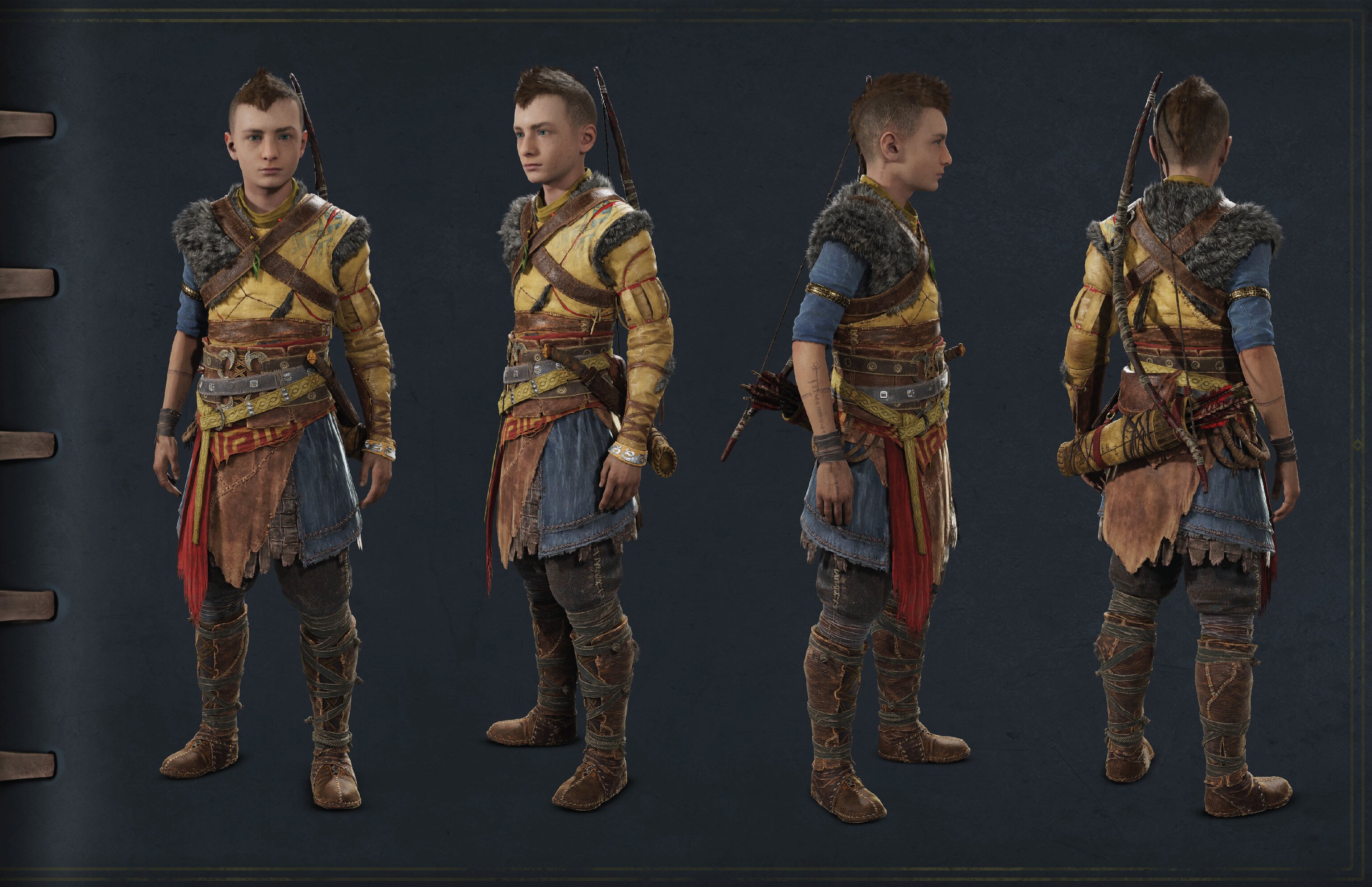 Are there any unique challenges the team faced when iterating on Atreus’ new design?

Kratos is so iconic that we needed to make sure we found what made Atreus unique so that he could stand next to the big guy and be recognizable. That’s never an easy task. We ended up focusing on the elements that we felt made his design special from God of War (2018) and built upon those pieces.

What made you settle on going with the final direction we see in the Atreus cosplay guide?

We knew we needed to keep the pieces that symbolize his parents, specifically Atreus’ yellow scarf representing Faye and his red skirt piece from Kratos’ Greek outfit.

We also wanted to keep the “X” shape on his chest, as that was one of the most memorable visual elements from his outfit as a kid. From that base, we explored a lot of different variations.

Dela Longfish (Lead Character Concept Artist) had some amazing designs for Atreus and the one we see now is an evolution of many iterations to find the perfect version. 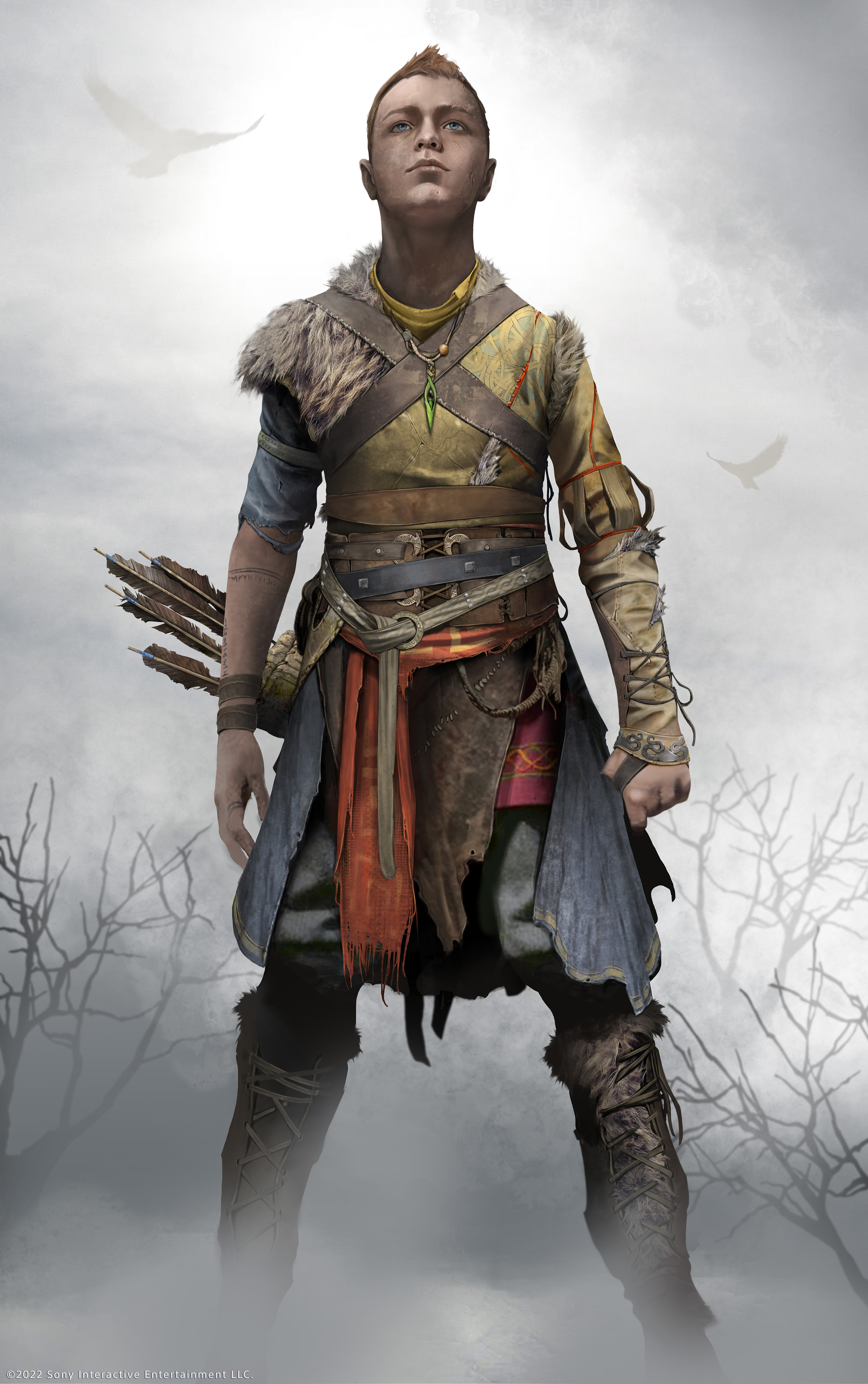 When it comes to visual storytelling, what aspects of Atreus’ character are most important to convey through his design?

Atreus is a teenager and we wanted to make his outfit an avenue in which he could express himself, especially since he makes a lot of his own clothing. It’s important to us that our character designs reflect the times they are living in, so the use of materials, stitching, and coloring of the costume need to be grounded, but not so much as to be overly limiting.

We always try to find the balance between realism and interesting designs that make the characters in God of War so iconic.

Atreus in the last game had some pops of color. In God of War Ragnarök he looks to have leaned in a lot more to bright colors. What made the team want to go this direction with his design?

At this point in his life, Atreus is trying to find out who he is and the color choices play with that theme. The yellow from the Giants is very strong and something we have used since God of War (2018) to hint at what was to come regarding his heritage.

The influence of his father is shown in the red waist cloth piece, the aggressive red arrows, and the red in his bow – you will be able to see how that influence impacts his future upgrades in God of War Ragnarök. 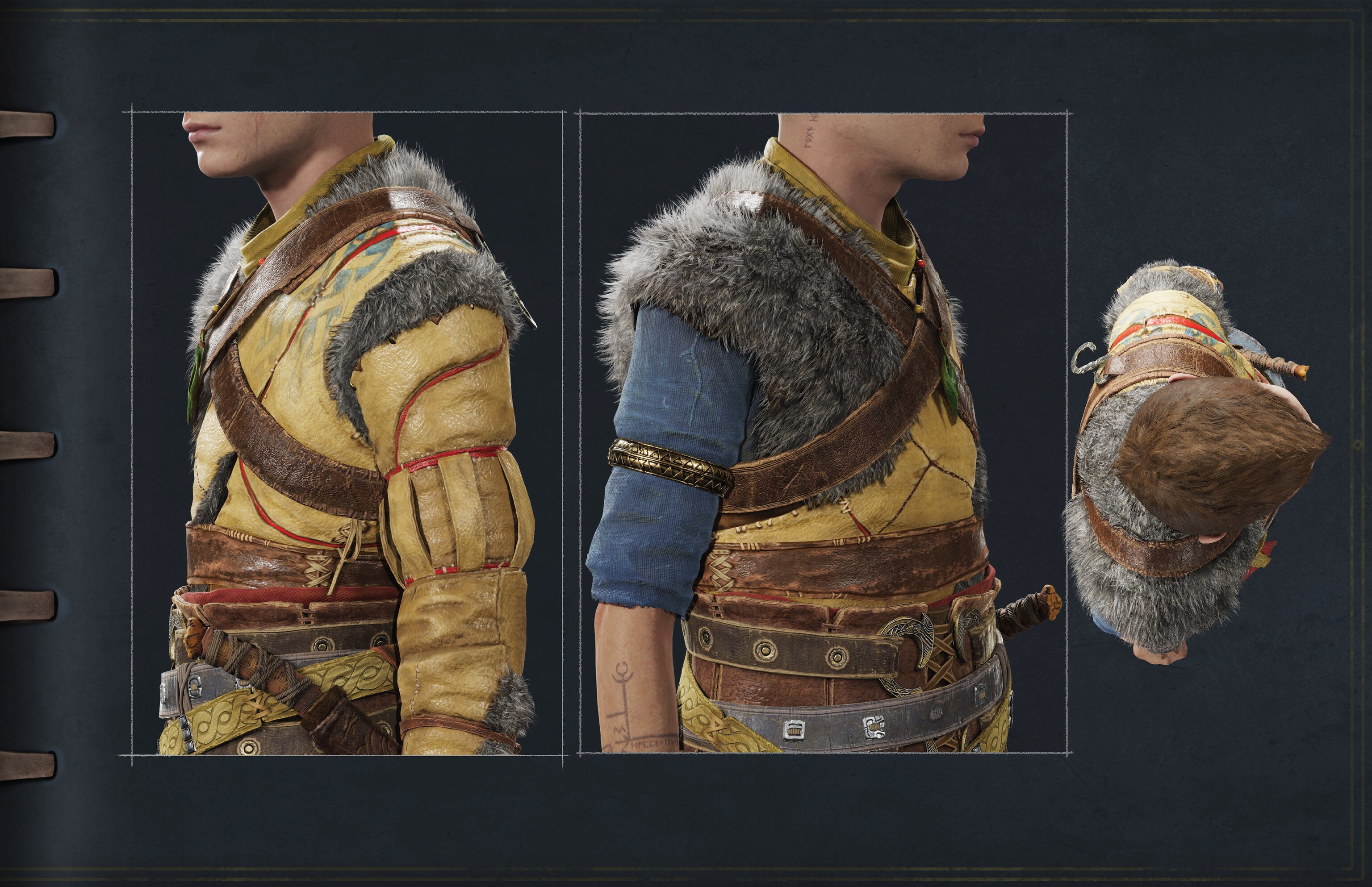 Is there any aspect of Atreus’ design for God of War Ragnarök that you are especially proud of or want players to notice?

Atreus is a product of his environment and the people around him. A very interesting detail that most people won’t notice is the hint of Kratos’ tattoos coming through his armor design.

You can see on his left arm/shoulder the cuts of Kratos’ tattoo coming through the costume – like father, like son. 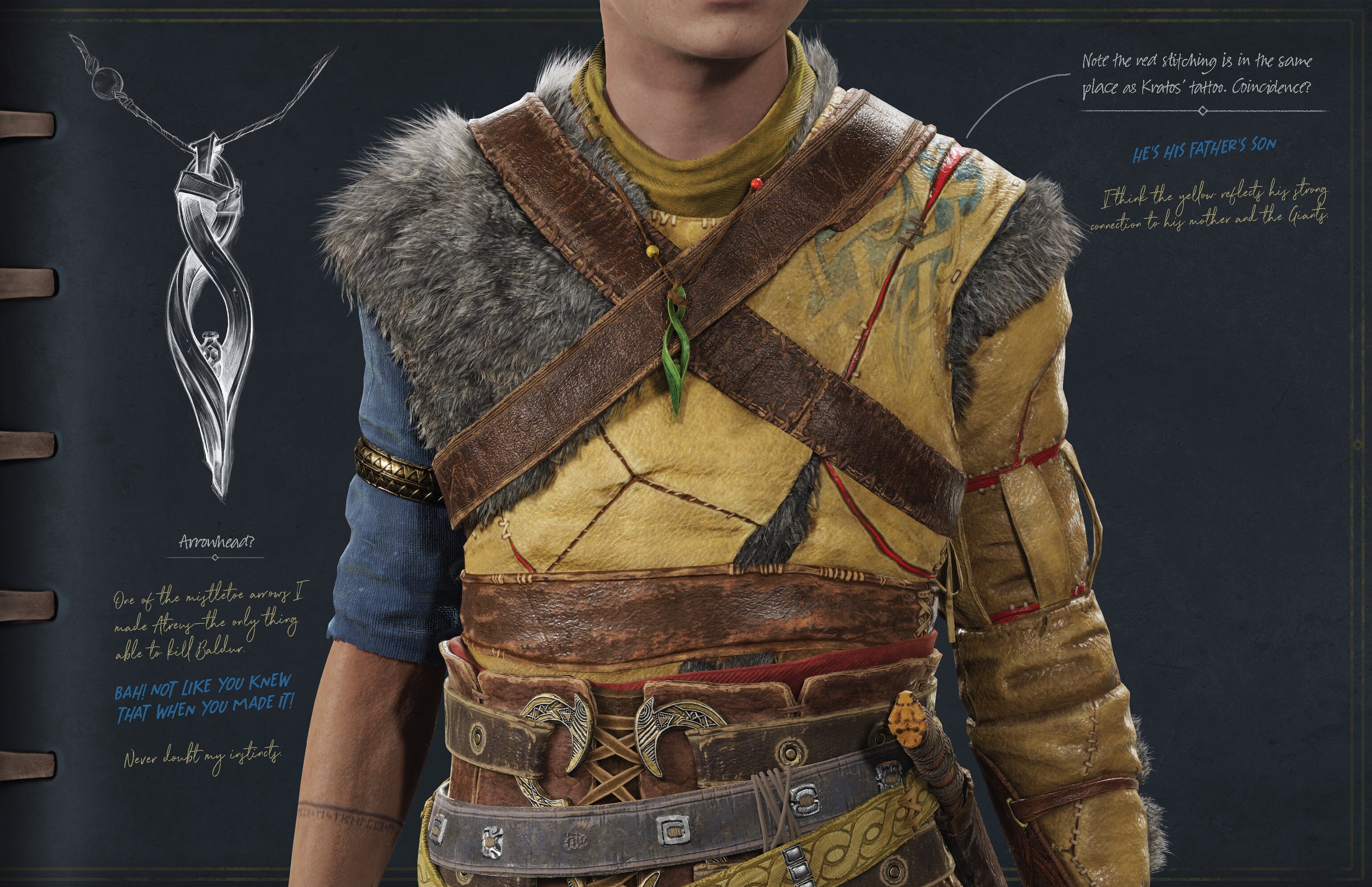 Any message for our God of War cosplayer community?

One of the most rewarding things as an artist is to see cosplayers do such an amazing job recreating these characters. We do this with all our hearts to give fans characters that seem believable and it’s incredible to see people relate so much that they decide to cosplay them.

I know the amount of work that goes into making things this complex, so I thank you and appreciate every single one of you.

If you decide to cosplay a character from God of War, make sure you tag Santa Monica Studio on social or use the hashtag #GodofWarRagnarok! We always love to see your work.
Click to expand... 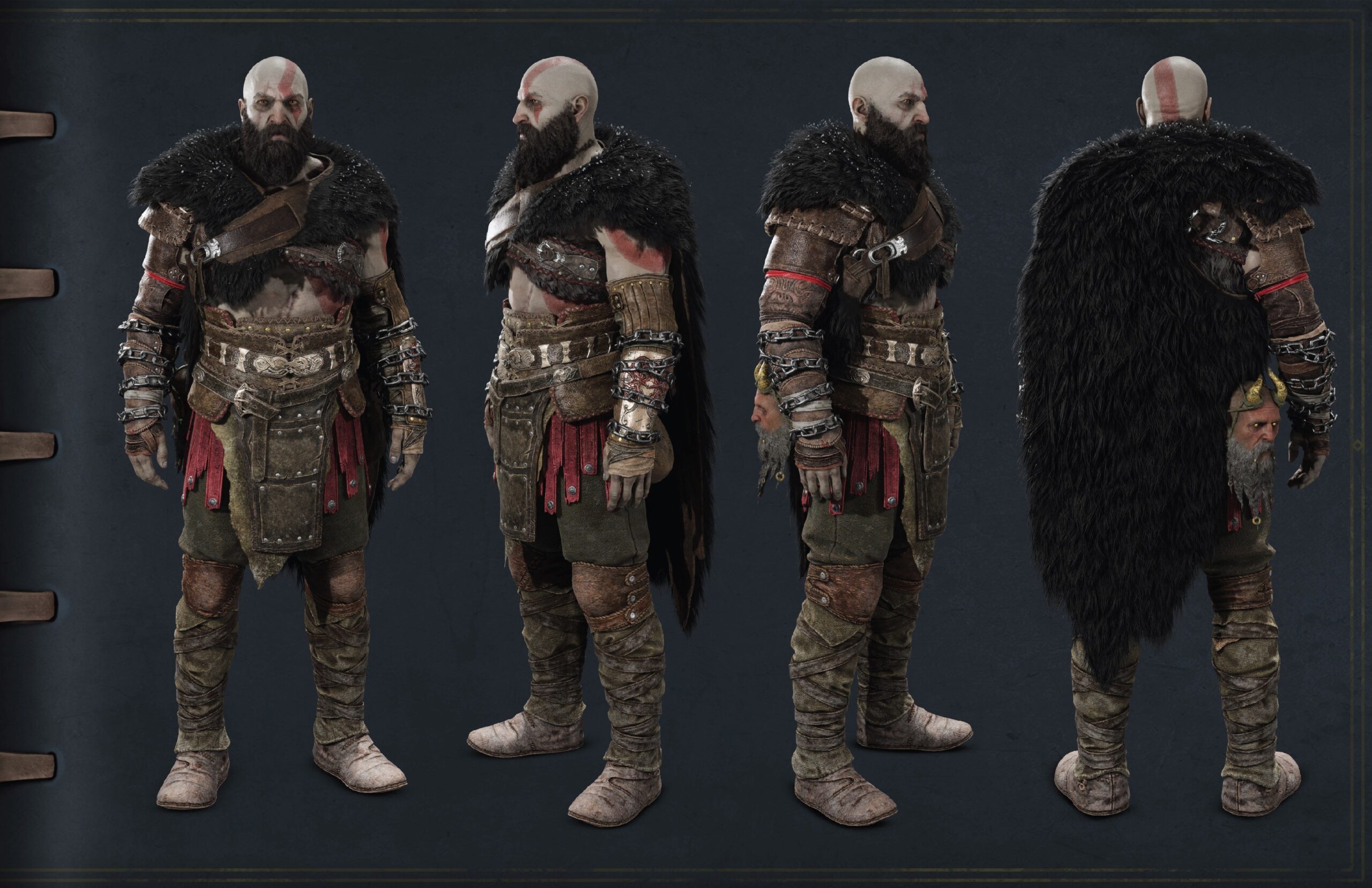 From Concept Art to Cosplay: Creating Kratos and Atreus’ new looks for God of War Ragnarök

I only heard several years. So we will probably find out in game. I’m going to guess 3 to 5 or even a hair more going by Atreus.
You must log in or register to reply here.