From the RUMOUR: Xbox One leaking liquid? thread 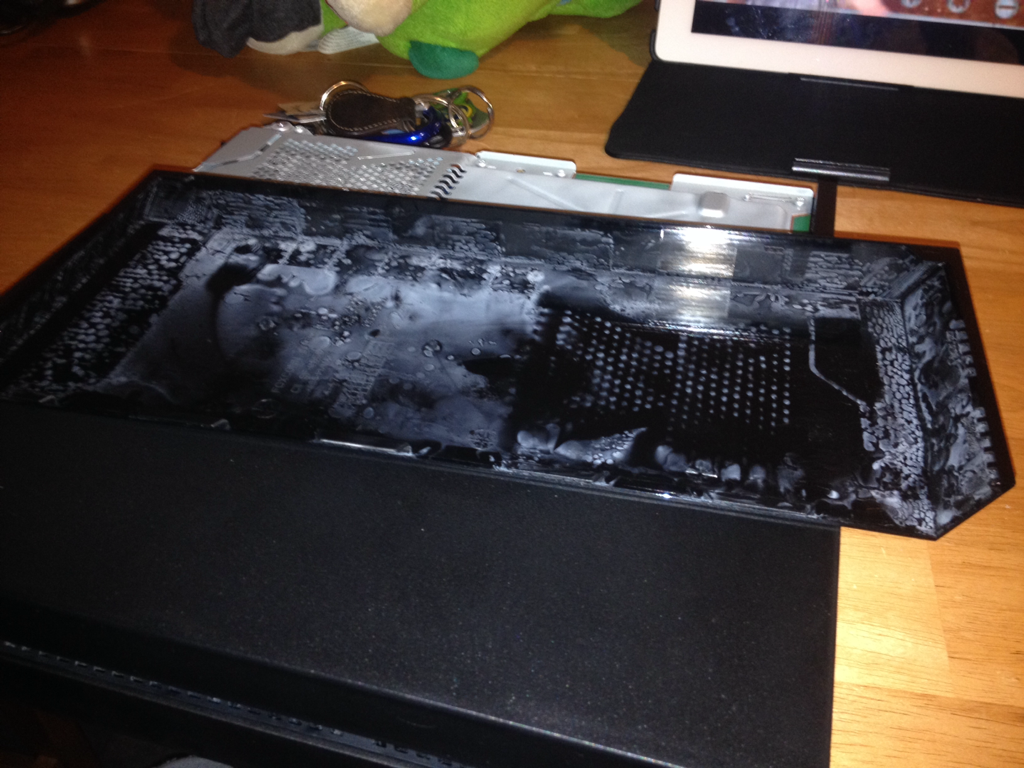 and a gaffer as well:


TTSupra said:
My console(PS4) has that white stuff on back in vents and I have yet to take to the cover off. I thought it was from running my humidifier with vicks vapor rub(which I run 8-10 hours at night time 7 days aweek) but now that I see that somebody else has it so Im not sure about that.

You may have to zoom in since I took a quick pic but up close it looks like dry liquid and thats why I assumed it was the humidifer.

And me wiping it off which in fact comes over very easy and seems powder like. Has no smell also to it lol.

Edit: The white stuff was also not there on the day that I received it from Amazon on launch day. Noticed it about a week ago but as I said above thought it was the Vicks Rub in the humdifier and just moved it to another room. I'v wiped it down now and will see what happens in another month or so.
Click to expand...

Is currently on Stage 1: Denial regarding the service game future

where is the leak?
C

Soap from the tub?
J

Hope mine is okay...

My condolences to that guy though.
Q

It's all the code (which has been coded to the metal) evaporating.

He must of had sex with it .
S

Maybe the owner had a Kreygasm
A

What in the FUCK.

Also, I wouldn't be sniffing that shit hahaha

EDIT: Checked my PS4. Nothing.
S

These PS4s have clearly been having "a good time" behind your back.

STONE THEM! STONE THEM, I SAY! I'm sorry

Who puts vicks Vaporub on their air humidifier?

I doubt this gets the same amount of attention but this should be interesting to figure out what exactly this stuff is?

does either system have liquid cooling?

i have to think it's the humidifier. theres nothing going on inside the system that could produce liquid.
O

This is probably the culprit.
B

We need to ask these guys where they put their PS4s and Xbox Ones... This shouldn't be happening.
W

This looks like stuff that some air humidifiers spit out, it's extra visible on black things.
V

Yeah this is most likely what is happening here.

BennyBlanco said:
does either system have liquid cooling?

i have to think it's the humidifier. theres nothing going on inside the system that could produce liquid.
Click to expand...

This. If it's a "COOL MIST" humidifer, that shit will leave a white, powdery residue all over the fucking place. I one running in my daughters room for a while. Everything had a chalky white substance all over it.
R

This is what you get Sony for screwing with Demon's Souls.
P

That is most likely from hard water in the humidifier. Used to have this happen all the time in my old home - took forever to figure it out. Try adding a small amount of distilled vinegar to the humidified and see if it helps (not responsible if your humidifier explodes )
P

Who the hell would sniff that, let alone collect some on their finger? That can't be smart/safe/normal.
B

This is what you get Sony for screwing with Demon's Souls.
Click to expand...

If this is true..well then there doing stupid stuff and that's the result seeing those photo's.
D

THIS IS A RESIDUE FROM A LINE WASHING MACHINE ? SOMEBODY CORRECT ME IF IM WRONG BUT PRETTY SURE THEY CLEAN, WASH PARTS AFTER MANUFACTURING/ MOLDING ?
S

It's from the wobble. The system isn't correctly balanced.
M

Same problem with the white stuff in the XB1 consoles ?
S

It's pretty common actually, if you have a cold or allergy issues it's very helpful.

The humidifier will circulate Vicks Vapor Rub throughout the air and keep you breathing easy all night long.
Click to expand...

Two things that I get out of this story (and the other):

1.) There are liquids in consoles? (Capacitors or whatever else.)

Both are brain twisters.

Well that was random. A humidifier and vaporub? Awesome way to start the morning on neogaf.
G

Is currently on Stage 1: Denial regarding the service game future

dazzlerazzle said:
THIS IS A RESIDUE FROM A LINE WASHING MACHINE ? SOMEBODY CORRECT ME IF IM WRONG BUT PRETTY SURE THEY CLEAN, WASH PARTS AFTER MANUFACTURING/ MOLDING ?
Click to expand...

Why are we yelling? Are you in that manufacturing facility right now?
K

There seems to be some kind of shit going on in the tech industry - maybe it has to do with the manufacturing?

I used it when my kids were babies and would get a cold or congested or something. It has to be one of those hot humidifiers though, can't be a cool mist one.

Regarding the humidifier, does the OP have hard water?
T

I think he just means the brand

as far as I know they just use water
P

glad I didnt buy ps4 then
You must log in or register to reply here.

Nov 20, 2021 started DragoonKain
Nov 21, 2021
RJMacready73
Insider leak on the current happenings inside Blizzard. Will be interesting to see if this turns out to be true.