Theres been some talk with Far Cry 5 that Ubisofts game is being political based on its setting. The National approached Nintendo of America president Reggie Fils-Aime about the situation, and his response was hardly surprising.

Making political statements are for other people to do, he said. We want people to smile and have fun when they play our games.
Click to expand...

If you want me to smile and have fun Reggie then why haven't you released Mother 3 in the States yet?
H

Looks like making statements isn't for the OP to make, either
S

OP: Making grammatically correct titles is for other people. I just want to have fun
T

Absolute dogshit. "We just want people to have fun! Keep politics out of video games!" is such a non-answer.
C

Politics doesn't exist if you ignore it.
O

"I ain't touching that with a ten foot pole!"

But trying to not be political is inherently political. :^) So Nintendo games ARE political.
S

We know you're woke Nintendo 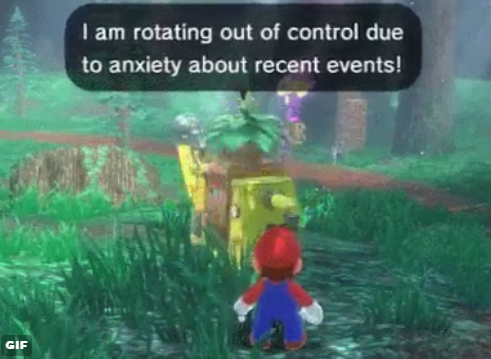 This is fine, they're aimed at a kids/family audience.
U

Why are they asking Reggie of all people? Why not an actual creator?
N

Cool Facts: Game of War has been a hit since July 2013

Are people seriously going to be upset about Nintendo saying this? Most of their games barely even have a story.
N

Obviously it's possible to have both, but if Nintendo don't want to make or don't feel confident in adding overarching political statements into their games that's entirely fair. Like he says, plenty of devs exist out there who are willing to do it instead, and likely would do it better.
Not sure why you'd be asking Reggie this question rather than any of the actual devs though.
E

You can do both.

Fuck sake every jrpg ever has you killing god as the final boss.

I agree with Reggie. I don't go to Nintendo games for political statements.
T

I agree with Reggie, focus on everyone having fun.
F

Nickle said:
Are people seriously going to be upset about Nintendo saying this? Most of their games barely even have a story.
Click to expand...

We have a couple in this thread already, apparently.
J

James Brown songs made political statements. They also made people smile and have fun. Not sure why Nintendo games can't do both too.
D

Good. Nintendo games with that Nintendo magic never fail to make me have a stupid ass wide smile while playing and forgetting everything else. To clarify, the type of games they do is great and I don't want it to go away. I'm glad we have people who want to have something to say in their games and people who don't, there's always room for both.
E

Not sure what else people would want someone like Reggie to say when given this sort of question.
T

Of all the questions he has been asked over E3 this might be the dumbest. Anyone who has read an interview by him ever would know this is what he would say.
U

Not every company or creator or person needs to make their work about political affairs. This shouldn't be an issue.
B

Reggie is the king of giving non-answers and avoidance. What are yall expecting?
P

That's fine. Not every company has to do everything.
G

Kingpin Rogers said:
I agree with Reggie. I don't go to Nintendo games for political statements.
Click to expand...

Every Mario game has pretty clear statements about gender. So while you might not go to them for that, you'll still get politics.
G

But Nintendo is political when they want to. See Fire Emblem Path of Radiance or Echoes.

Funny thing is Xenoblade X did a much better of incorporating social issues and themes than all these western games with their hamfisted, overbearing implementations.
D

Fire Emblem Path of Radiance in a way.

Because I can't enjoy something that may not be of my tribe.
R

That seems like a really random thing to ask him. I don't really have a problem with the answer though. Nintendo primarily makes games aimed at children, not much of a reason to focus on politics there.
B

Reminds me of a similar statement by Aonouma's when asked about putting messages into Zelda.

Aounuma said:
I havent and wont be trying to put any message or meaning into the games. (If someone else were to make a Zelda game though, of course it might be different.) Occasionally I receive messages from fans telling me how playing Zelda games has changed their lives. While of course this makes me incredibly happy to hear, I feel a great sense of responsibility as well, so part of me feels that developers putting their own ideologies in games is kind of scary.
Click to expand...

Mixed feelings. I'd like Nintendo to break boundaries, and saying "we just don't do that" seems a little unambitious.

On the other hand it's not as if that doesn't leave a ton of room for ambition and innovation in other areas, so if they want to steer clear, fair enough.
K

So long as you don't consider including gay people in stuff like Tomodachi Life a "political statement"...
Z

Garrett Hawke said:
Every Mario game has pretty clear statements about gender. So while you might not go to them for that, you'll still get politics.
Click to expand...

I think there is a difference between making a statement and one being inferred by the user.
C

It's true that everything is political, but we gotta admit that Farcry 5 is way more political than like, uh, Mario Maker. And obviously that is by some design.
S

lol. Ya'll want everything to be political so bad. You can barely get a narrative out of a Nintendo story and you want them to make some statements? Chill.
F

I feel like this is a question he was unprepared for and thus gave a bad-sounding answer. A better answer would be that Nintendo games do convey messaged but they're more general and universal, just not as focused or immediate as other games tackle, which is fine. Nintendo is sort of the Disney of gaming, it's not like Disney films say nothing or are devoid of some message creators want to transmit to their audience, but they're not contemporary documentaries either.
U

Kangi said:
So long as you don't consider including gay people in stuff like Tomodachi Life a "political statement"...
Click to expand...

Why should that be? Sexual orientation isn't political
J

Nintendo is Nintendo after all.

So We The Happy Few port coming?
O

There is nothing wrong whatsoever about Nintendo taking this stance. The majority of their games barely have any narrative as is.

The likes of Mario, Donkey Kong, Kirby etc. don't have all that much to say.
T

Sheesh, was Reggie drunk? Couldn't make out the title at first.

But yeah, I'm actually curious about what the developers have to say about the subject.
You must log in or register to reply here.

May 29, 2021 started IbizaPocholo
Jun 1, 2021
ToTTenTranz
2
Opinion Platform Reggie Fils-Aime not surprised that Switch has become a huge success, made his retirement decision easier

Feb 17, 2021 started IbizaPocholo
Feb 20, 2021
Hulk_Smash
Ubisoft will show Far Cry 6 on PS4 and Xbox One to avoid a Cyberpunk 2077 situation, "We really aim to target maximum quality on all platforms"