RESIDENT EVIL - From best to worst

With hype building for Resident Evil 8, I thought it might be fun to try ranking the previous games in the series.

Now there have been a lot of remakes, remasters, directors cuts, and spin offs so for my list below I'm simply going with how much I enjoyed playing the seven main games upon their initial release.

1st. Resident Evil 4 (2005). For me not just the best game in the series but one of the best games of the Noughties. It felt wonderfully solid and grounded - every mutating villager, every monstrous boss, every bullet from the broken butterfly had weight to it. Powerful, bold, unusual game design like nothing that had been seen before.

2nd. Resident Evil 2 (1998). Having a chance to revisit this game recently with the remaster was a real joy. It took everything about the original and made it bigger and better. The expansion into the city streets instantly upped the anti and made Resident Evil 2 feel like a proper 'end of the world' style zombie experience.

3rd. Resident Evil (1996). Alone In The Dark back in '92 might have invented the genre, but it was Resident Evil that actually coined the phrase 'survival horror'. An enclosed area, locked doors to figure out, precious little ammo, and zombies for company - what a recipe.

4th. Resident Evil 5 (2009). Perhaps controversial putting this one so high (I remember reviewers at the time uncharitably refer to it as Resident Evil 4.5) but I thought it was brilliant. The African setting (which was also controversial to some) was so fresh and unique, as was introducing the sidekick Sheva.

5th. Resident Evil 7 (2017). Easily the scariest of the Resident Evil games. Putrid decay lingers everywhere and really creates an environment that you don't want to be in. It's a bit low in the list as the pace is sluggish (to accommodate VR) and the final third of the game tails off a bit.

6th. Resident Evil 3 (1999). Rushed out just one year after Resident Evil 2, and perhaps a little samey, for me this is one of the weakest entries in the main series. Video games are fundamentally about empowerment and having to constantly evade and flee the Nemesis sits somewhat at odds with that.

7th. Resident Evil 6 (2012). I'm struggling to remember this game, with its messy interwoven story, but I do recall the deflated feeling of disappointment. From the start it felt 'off' to me and unworthy of the Resident Evil name.

So, how'd I do on my ranking? Which are the best/worst Resident Evil's for you? 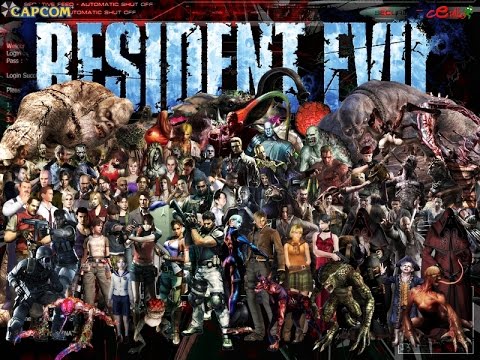 You got the first and the last right
Reactions: Cutty Flam, SoraNoKuni, NeptuneCL and 7 others

Just so y'all know, no one will read your post if it's literally just a barren list.

RE6 was fucking garbage... as a main RE game...
Reactions: Cutty Flam, odd_hatch, phaedrus and 5 others

For me it is

1. RE remake for the tank controls games. RE2 if you exclude the remake

Everything else is ok or forgettable. But only a few were complete trash

8/10 for the series. Would play again.
Reactions: Cutty Flam, Northeastmonk, Saber and 1 other person

All the orig versions.
Reactions: Cutty Flam, KAOS, Madevil and 10 others

That's a thorough list! Not much love for Resi 5 in there tho...
Reactions: Cutty Flam
S

I'm glad that everyone can at least agree that 6 is at the absolute bottom.
Reactions: Cutty Flam, phaedrus, Camreezie and 4 others

Shit:
RE6
Reactions: Cutty Flam, DoubleJTripleDistilled, Bankai and 7 others

Love the categories - the Elite to Shitometer.
Reactions: Cutty Flam, Insane Metal, DancinSwayze and 1 other person

One thing that I think is totally fair for RE4 is that it is a phenomenal videogame but a terrible Resident Evil game.
Last edited: Jan 21, 2021
Reactions: Cutty Flam, ahmyleg and Matt_Fox

I like all Resident Evils.
Reactions: Cutty Flam, Bonfires Down and Matt_Fox

Matt_Fox said:
Love the categories - the Elite to Shitometer.
Click to expand...

I really don't like RE0 and have always felt that way, but even it doesn't deserve to be grouped with RE6. It needed its own bottom tier.
Reactions: Cutty Flam and Matt_Fox

The A tier i loved it ,B tier was ok but with some problems and C Tier was disappointing even though i still enjoyed them more or less.

I don't consider RE7 a Resident Evil game and i haven't played the RE3 Remake yet.I really want to play the Revelations games though. They have been in my backlog for years and from what i've played of the first Revelations (i had played the demo) i'm sure i will enjoy them.
Last edited: Jan 21, 2021
Reactions: Cutty Flam and Matt_Fox

Pretty sure zero is a main game.
Reactions: Cutty Flam and MacReady13

I can only speak on the games I've played


I enjoyed every single one of them.

RE2R the best of them all with RE6 the worst. RE4 did not click with me when it launched so maybe the remaster/remake might change my mind these days. I will say RE7 has the best first half of all games but just goes meh late half.
Reactions: Cutty Flam, DoubleJTripleDistilled and Matt_Fox

I don't consider RE7 a Resident Evil game and i haven't played the RE3 Remake yet.I really want to play the Revelations games though. They have been in my backlog for years and from what i've played of the first Revelations (i had played the demo) i'm sure i will enjoy them.
Click to expand...

Revelations is a pretty decent game, the story is actually quite good but it's presented in a really confusing way, the ship parts are infinitely better than the arcade style flashbacks and Chris' sections. I think Revelations 2 is superior though. They did a great job with Barry and the co-op works really well. The story is kind of dumb at times (Claire's love interest subplot) but the main story is pretty decent. Revelations 2 was a total surprise after RE6. I wasn't expecting anything and was really surprised at how much I enjoyed it. I think I've played through it 3 times.
Reactions: sublimit and Matt_Fox

From the games I've played all of, or enough to feel I can fairly judge:

Never played 6, but watching videos of it clearly it's terrible as a "resident evil" game
Reactions: Cutty Flam and Matt_Fox

I still think the original REmake was the best one, followed by RE2 Remake for updated gameplay. I like RE4 in concept, but actually playing it feels worse than the old PS1 games to me with the way Leon controls. 5 was great if you played it with a friend, just ok otherwise. RE3 was fun, Code Veronica was fun. 0 I didn't care for. 6 is the worst one by a landslide. I thought the Revelations series was really good when it was all done. The OG is about in the middle of the pack.

I really hope the RE4 remake is true and that they update the controls to the RE2/Revelations style. That will significantly increase my enjoyment of it.
Reactions: Cutty Flam and Matt_Fox

1. RE1 Remake
2. Code Veronica
3. RE4
4. RE2
5. RE3
6. RE0
7. RE5
8. RE6
9. Every Spin off game
10. The garbage RE2 and RE3 Remakes.
11. RE7
RE7 deserves last place because it doesn't feel anything like a RE game and more like a cheap VR cashgrab. I'm sure RE8 will suck as well since they kept the same bland MC and first person mode.
Reactions: Cutty Flam, DoubleJTripleDistilled and sublimit

We talking Core games only or sides?

Low tier trash: Every spinoff and Revelation games. The original RE3 is the only main entry I havent played.
Reactions: Cutty Flam, Matt_Fox and Barry Burton

to be clear for many comments here is not RE1 remake its a HD Remaster
Reactions: Cutty Flam, Excess and Matt_Fox

Don't think I can rank definitively. Only adding those played, obviously.

Haven't played the REmakes or the ones that originated on handhelds, but for me it would be:

I have my issues with Zero in terms of story but the biggest thing that keeps me from enjoying it more is the lack of an item box. Being able to drop items is nice but it can be a pain tracking stuff down. I'd much rather have the item box. The game is insanely gorgeous though.
Last edited: Jan 21, 2021
Reactions: Cutty Flam, Lux R7 and Matt_Fox

Before 7, my order from favorite to least favorite was

RE7, thankfully, broke this trend and id probably put it at #3.
Reactions: Cutty Flam, DoubleJTripleDistilled, Sub Boss and 1 other person

Low tier trash: Every spinoff and Revelation games. The original RE3 is the only main entry I havent played.
Click to expand...

Damn dude, you owe it to yourself to play the original Nemesis. It's so good. Never understood why people bash it. Nemesis is better in the original than the remake, it has branching narrative paths like the OG 1996 RE (character cutscenes you can completely miss out on), some really memorable locations, good puzzles. The Mercenaries mode after beating the game is a blast too. Great replay value. It's a fantastic game through and through. You should definitely check it out sometime.
Reactions: Cutty Flam, Barry Burton, Matt_Fox and 1 other person

For now, just passing by to say that I'm one of those weirdos that thinks that Resident Evil (2002) does not make Resident Evil (1996) obsolete. I still love OG RE1 for lots of reasons, and play it yearly.

That's a controversial opinion, I thought the recent REmakes particularly 2 were universally praised. You werent a fan?
Reactions: InfiniteCombo

I didn't care after RE4 being one of the most boring RE I ever played... and REmake 3 lol lol lol
Last edited: Jan 21, 2021
Reactions: Barry Burton and Matt_Fox

InfiniteCombo said:
For now, just passing by to say that I'm one of those weirdos that thinks that Resident Evil (2002) does not make Resident Evil (1996) obsolete. I still love OG RE1 for lots of reasons, and play it yearly.

Dude abso-effing-lutely. I play through the OG 96 release probably every other month. For about 3 years it was literally the only game I played, and that was recently, like 2015-2018. Just wasn't gaming much and I was dealing with a lot of shit that fell into my lap. It was like zen meditation. It's my personal favorite game of all time. It really is an absolute masterpiece in terms of game design. People crack on the voice acting but who cares, the sound design, environments, gameplay, and story hold up 100%. The success of RE is one of the reasons Capcom was able to stay afloat back then, and that's coming from Alex (CVX Freak). He's about to release a book that details tons of behind the scenes stuff, he lives in Japan, speaks the language and interviewed tons of people who were involved in the early RE games. Can't wait to read it.
Reactions: Sub Boss, Neff, Fake and 2 others

I've ignored the spin offs (Survivor, ORC etc) and also the remakes. The GC Remake would be up equal with original RE2 though.
Reactions: Barry Burton, fart town usa and Matt_Fox

My favorites are Code Veronica (classic) and RE5 ("new").
Reactions: Cutty Flam and Matt_Fox

That is a thorough list! I cant help notice you've got 3 at both top and bottom!!
Reactions: Cutty Flam

Don't get me wrong, they were good games in the time when they got released. Yet, they sucks as resident Evil. Add to that that both are unplayable these days.

I tried to play both and they both sucks to play.