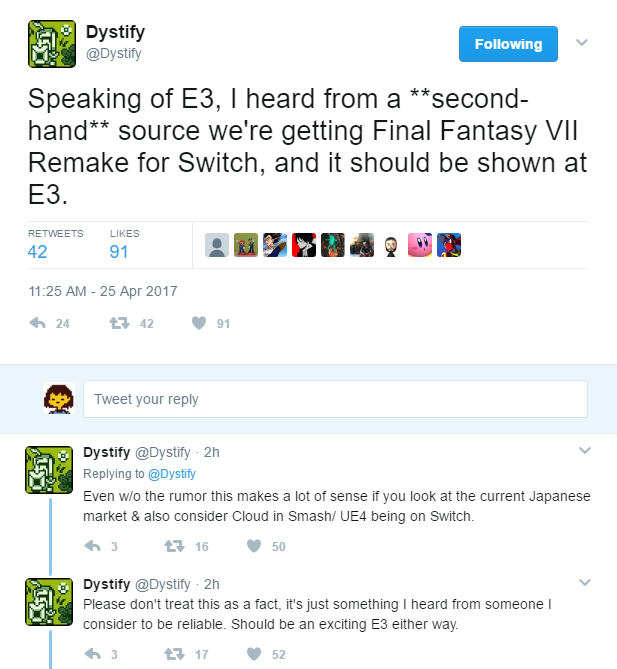 Take this with a grain of salt of course, but I think Dystify has been reliable before.

If this is true. I never need to get a PS4

Although can it even handle it?
M

So the E3 rumors have begun.
S

THIS MADE MY GODDAMN DAY.
S

How to tank your believability in a single tweet.
K

What have they been reliable on previously?

Too early for these rumors

Maxinas said:
So the E3 rumors have begun.
Click to expand...
appears so.

i guess this could happen. but if i wanna see ff7 remake i wanna see it in full hd and beautiful graphics..on ps4/pc
S

Hey may be reliable

but a second-hand source?
F

I am someone who said FF7 on Switch woukd never happen. Too HD, Switch isn't powerful enough.

I found a screenshot of it.
M

I'll believe it when I see it.
M

If true I would love it!

But it is hard to believe for me
A

Who is that and what is their track record.

If he didn't post this there, then I don't think you should have. It's obvious he's not completely confident about this 'rumor'.

It was announced as first on PS4, no?

Square Enix needs to announce the others platforms.
P

Needs a Holiday on Gallifrey

Please. I'd love to play this on the go.
F

That frame rate should be interesting to see...
D

Seriously? Pretty sure rumors based on twitter aren't allowed here...

If I wanted it to be a GAF thread I would've made one myself. I'd only create that if I was 100% certain though.
P

Yes please. Or just PS4, I'm cool with that, just release it in the next couple of years at least Square!
S

If it ran well I'd get ff7r on switch

If 15 isn't coming to Switch, why would VII Remake?
C

If it's "First to PS4" it seems highly unlikely they'd be showing it off on competing platforms at a major press conference.
L

How many carts?
G

DecoReturns said:
Although can it even handle it?
Click to expand...
I guess it could be streamed, like DQX 3DS. But that's assuming this has any validity to it at all.

well it does have unreal 4 mobile support.
C

Does his uncle work at Nintendo?
D

If it's even coming no way the Switch version is shown at this E3. A bit after part 1 has released sure but not before because of the PS4 timed exclusivity.
S

I'd still get it on PS4, as much as I loved BotW on Switch and want more games on it. This just isn't something I'd be willing to sacrifice graphical fidelity on.
T

More of a reason not to buy it then. Means graphically and performance wise will be scaled back to work on the switch. Oh maybe they should finished it before talking about releasing it else where.

The Horror the horror

I mean we know it's coming to another platform. I wouldn't be shocked if it did come to Switch.
M

At a blistering 7 fps.
H

Highly doubt it but sure

I found a screenshot of it.
Click to expand...
Lol

The Hamburglar said:
More of a reason not to buy it then. Means graphically and performance wise will be scaled back to work on the switch. Oh maybe they should finished it before talking about releasing it else where.
Click to expand...
You realize this is a second hand rumor from a guy on Twitter and not Square talking about it right?
D

I found a screenshot of it.
Click to expand...

DecoReturns said:
If this is true. I never need to get a PS4

Although can it even handle it?
Click to expand...
Downgrades can make any dream (or nightmare) come true.
L

ethomaz said:
It was announced as first on PS4, no?
Click to expand...
IIRC, They used that particular wording exactly.
G

looking forward to play episode 1 on the switch 2
P

The thread for confirmation will be beautifull
P

Obviously this is just a rumor and business deals change all the time, but I thought Sony was touting how this was a timed-console exclusive. Seems odd if that is still the case too allow them to show off the Switch version before the PS4 version launches, unless being a hybrid the Switch isn't considered a "console" under the contract.
B

How is ff7r going to run?

Edit: this post is stupid and I take it back
F

maybe targeting a lower spec could mean Square could release part one this side of 2020.

Or ya know. A PC version port for lulz.

Anyway serious talk. Who is this dude and what is his trackrecord?
L

Who would want to wait a year plus for it? Remember it's out first on PS4 for consoles.
O

The Switch will probably get the PC version. Can't see it being able to handle the same version being made for PS4
D

Dystify is not a source

Middle of no where

If true, this will make me unbelievably happy. Preordered, day one, day zero, or bought before it's even possible to buy bought.

Will buy on the Switch