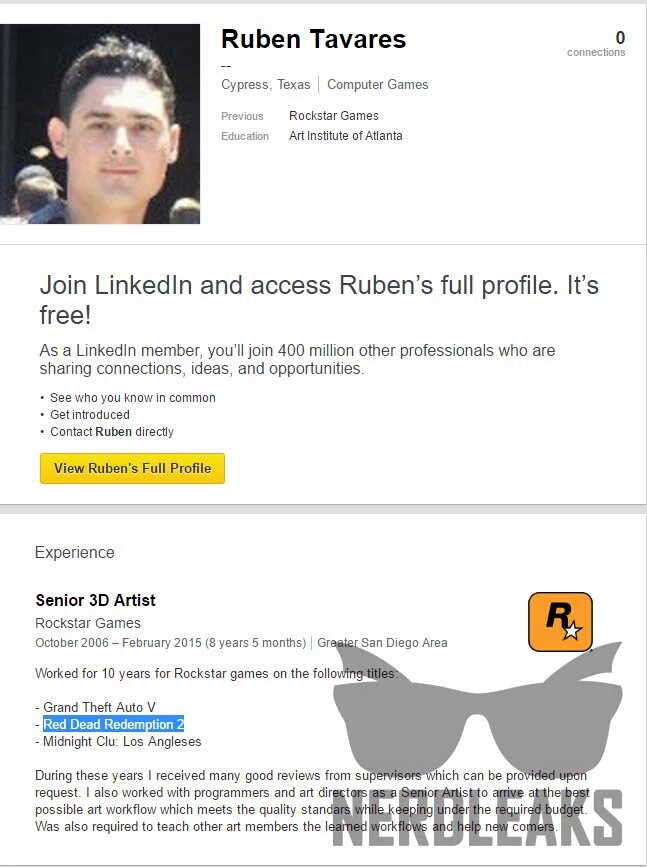 Alongside a PC version of RDR. Thanks.

Would be great. RDR is my favorite rockstar game.
E

I mean, it was going to happen anyway, might as well have been GTA 6 leaked.
Q

"Midnight Clu: Los Angleses". I lol'd at that.

Midnight Clu: LA is the Tron crossover I never knew I wanted.
S

I am truly shocked at this revelation.
Z

He only worked on 3 games during his 10 years?
B

It was pretty much an open secret anyway
T

DryvBy said:
That's the remaster, bruh.
Click to expand...
So many remasters these days it's difficult to keep up
C

Hope it doesn't take us a year for a PC version with as well as GTAV has done.
E

Poor Ruben. Couldn't even cover his name and pic.
M

All but confirmed at this point
K

He could mean it as the sequel to Red Dead Revolver.
X

Flandy said:
He only worked on 3 games during his 10 years?
Click to expand...
That's Rockstar for you.
S

Internally during development Red Dead Redemption was known as RDR2 (since it's the second game of the Red Dead franchis), this did cause some to refer to the game as Redemption 2 when rushing out forms and filling out cv's. That persons games go in timeline order, most recent at the top (GTAV - 2013, Red Dead Redemption - 2010 and Midnight Club: LA - 2008).

Sorry to burst that bubble quickly guys.
A

The next Red Dead game is the only game I want from Rockstar.

I have Red Dead Redemption GOTY Edition on both PS3 and 360.

Not interested in mythical agents (lol) and it's far, far too soon for GTAVI.
C

Pre-order Red Dead 2 and get original Free with X1 BC.

You heard it hear first folks. Makes sense being that they are being so quiet about RD BC when it was working several weeks ago.


That is the dream
P

Shocking. Next there will be a leak that says Treyarch artists are working on the next Call of Duty. A better question would be "when does it launch?" Could still be years away

i've been begging for over 5 years.

also wtf at this dudes spelling..

probably just a mistype of a 2 that gaf is going to freak out about.
D

It's got to happen at some stage, right?
P

Glad that RDR2 it's semi-confirmed, but I expected Bully 2 instead
S

Agent is the new Last Guardian

Mattenth said:
Expected, but a better question would be "when does it launch?" Could still be years away
Click to expand...
Maybe at E3 we'll see Ruben appear on stage riding a horse.

Would love to have a PC port so I can play the first one. I won't dust off the PS3 anymore. Hope they announce that some day :/
H

He probably means Red Dead Redemption, since that's the second game of the series that started with RED DEAD REVOLVER.
I

it's dead jim
Click to expand...
Who needs Agent when we have such a great new IP like Midnight Clu Los Angleses?
S

Yes. RDR2 is being worked on. Game was a great hit ofc it's getting a sequel. What's the point of making threads of 'leaks' that aren't leaks at all.
E