Confirmed these are Prey 2. The game was found in the registry earlier this year, and achievements parsed. 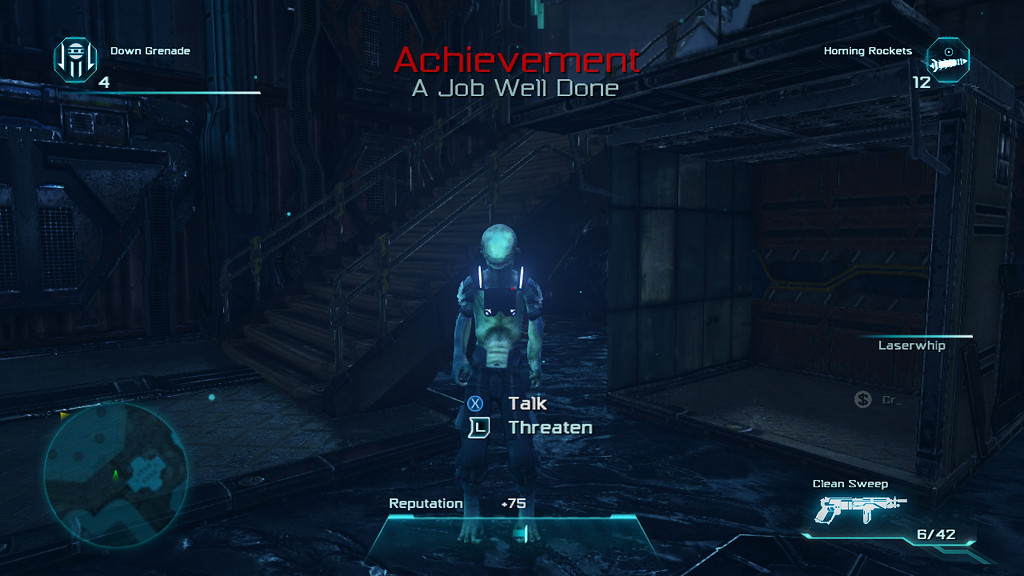 Bethesda marketing and PR boss Pete Hines told Rock, Paper, Shotgun emphatically that Arkane is working on an unrelated project and has not assumed development of Prey 2, as was reported back in May. "No," he stated simply when questioned at QuakeCon. "All of that stuff, I have no idea where it came from. The Human Head Prey 2 thing is the Human Head Prey 2 thing. Arkane is over here, and they're doing their thing, and that's for them to work on. We'll be ready to talk about what they're working on when it gets closer to release."
While making it clear it was a difficult decision considering the number of years and amount of money that has been poured into the game's development -- it was announced in early 2011, at which point it was expected to be out in 2012 -- Hines reaffirmed what IGN was told by Bethesda in June about the delays: the game's quality is to blame for the position it's in now.

"The reason that it got delayed the way it did is because it was not hitting the quality bar that it was supposed to and needed to," Hines said. "That was ultimately the problem. It had nothing to do with what it was trying to do. It just didn't hit the quality bar." He compared it to this week's delay of another Bethesda-published game, Wolfenstein: The New Order, which is now coming in 2014 in order to give it "some additional time for polish."
Click to expand...

That achievement is still a work in progress.
D

I would still love to play that version
Z


Edit: nvm added to OP
I

Too much aliasing, would never buy in this beta stage.


Take that, whore of the orient fans!
Im so sad this is cancelled, prey was amazing
C

Man I saw them demo this game at PAX a few years ago on a huge TV & it looked so great.
L

Looks pretty cool to me.
L

That are pre-alpha screenshots omg, ignore that
E

looks as though it would have been so interesting, and hopefully good too
G

The concept looks cool imo.
I

The E3 demo they showed us looked way more graphically impressive than these screens.
A

Of course it was, game was still early on in development.

Thanks god, it is look like totally different game to the first one.
W

derFeef said:
How can you tell?
edit: Oh you mean Prey 1 not the demo of Prey 2.
Click to expand...

Of course (forget to add "look"). It is look like a Star Wars game.

iceatcs said:
Bloody of course, I mean it is look like Star Wars game.

This hurts too much.
F

Oh man, my day is ruined.

It still pains me we may never get this game.
It had promise.
D

Another heap of salt in the wound, I hope that whatever Prey 2 is now still has the same promise as this version.
Y

This was in development for current gen consoles? Doesn't look that bad graphically if it is, looks somewhat interesting TBH.
G

Hollow said:
It still pains me we may never get this game.
It had promise.
Click to expand...

Human Head was a good studio and this was their baby. So sad to see it taken away from them.


Yawnier said:
This was in development for current gen consoles? Doesn't look that bad graphically if it is, looks somewhat interesting TBH.
Click to expand...

someone link all the Bethesda/ZeniMax bullying insanity please. I have to go cry now, so I can't do it at the moment.
R

I still don't get why so many people were excited for Prey 2. I didn't really see much in the first game other than a standard DOOM-style FPS.
S

RedSwirl said:
I still don't get why so many people were excited for Prey 2. I didn't really see much in the first game other than a standard DOOM-style FPS.
Click to expand...

What they showed from the second game was very compelling.

You probably wouldn't be making those statements if you saw this:

Spring-Loaded said:
someone link all the Bethesda/ZeniMax bullying insanity please. I have to go cry now, so I can't do it at the moment.
Click to expand...

Spring-Loaded said:
someone link all the Bethesda/ZeniMax bullying insanity please. I have to go cry now, so I can't do it at the moment.
Click to expand...


n8rtot said:
You guys know Bethesda owns Arkane, so they can make them do whatever they want them to do. During production of Dishonored, Bethesda started to arbitrarily reject milestones. In doing so, the then-independent-Arkane had to find ways to pay their staff since successful milestones are what feeds the bank. Knowing that Arkane wasn't making their milestones on time and potentially going to suffer internally, such as loosing staff, or ultimately shutting down, Bethesda's parent company Zenimax stepped in to help Arkane out by floating them loans during this "quality issue" period. That seemed nice of Zenimax to help out Arkane, right?

Now since Bethesda had been rejecting milestones because they didn't believe Arkane was maintaining the quality they originally promised, Arkane's also severely behind schedule because time has been spent correctly and addressing Bethesda's issues with previously rejected milestones.

Since Zenimax is also the company that's invested in Bethesda, they start telling Arkane they have serious concerns about their ability to finish the Dishonored. Even though they originally floating them loans to keep Arkane running, they now give them an ultimatum: pay back the loans or sell them the studio for some piddly amount. If Arkane doesn't do either, then Zenimax will take them court for breach of contract since they're now so far behind in the project.

Remember, it's because Zenimax's company Bethesda has been rejecting milestones that put Arkane behind in the first place.

The outcome is Arkane reluctantly sold their independence to Zenimax so they could continue the creative work they started and at the very least have public recognition for their efforts.

This is why Bethesda can tell Arkane to do whatever they want them to do now.

What would you do if you were making Prey 2 and started wondering why Bethesda was suddenly treating you differently? You'd start looking at past independent developers Bethesda has had deals with to understand if it's a developer issue or a publisher issue. When you discover Bethesda started to reject milestones at not only Arkane, but Splash Damage and inXile, you start to see a pattern. Knowing the fate of Arkane, if you were the Prey 2 developer would just sit there and see what happens or would you confront the publisher?
Click to expand...

n8rtot said:
Human Head has their own version of idTech. This is the only version that supports open world gameplay. Arkane on the other hand only has experience with Unreal. Because of these differences the project has to be restarted. There's no way it'll ever be what Human Head created, since Bethesda doesn't have source code for Prey 2. Even if they did, it would take them months to decipher it and I can't imagine Human Head cheerfully helping them out.

Also, it's going to cost Bethesda 10x more to have a different company do anything with Prey 2 than let Human Head finish it. The only developer they own which has the man-power and lower costs to make Prey 2 is Arkane Austin. Machine Games might have been a possible candidate but we know they're now working on Wolfenstein. Any other independent developer would either scoff at the low-ball figure Bethesda was offering or simply not have the experience to pull it off after some trial run. With Arkane, they can at least point to similar game mechanics despite being a completely different beast under the hood.
Click to expand...

n8rtot said:
A few years ago Zenimax received a large investment to acquire talent. I think it was $150 million or something. When you have a board of directors that include Jerry Bruckheimer and Donald Trump's brother as well as the original investors who want Zenimax to "acquire talent", then you're going to have members asking why Zenimax isn't making money outside of their core Bethesda studio (Scrolls and Fallout).

Since Zenimax botched Demon's Forge with inXile and Brink with Splash Damage, they had to bank on Arkane's Dishonored and Human Head's Prey 2. Arkane is what is today because of Bethesda. Dishonored is a success because of its original creators. Prey 2 is a strange IP though, since it was Bethesda's only sequel at the time and previously owned by the Radar Group. Doom 4 has had its own issues. Wolfenstein wasn't even known about when Prey 2 started having whatever happened to it.

Both Doom 4 and Wolfenstein's rights were purchased along with iD Software. There's no reverting of ownership after no use. Prey 2 on the other hand could revert back to the Radar Group if it's not used by a certain time or declared cancelled.

It could be Zenimax realized they were caught with their hand in the cookie jar with Human Head from a legal standpoint and it created some sort of stalemate. Zenimax's CEO is Robert Altman who was previously a lawyer http://en.wikipedia.org/wiki/Robert_A._Altman. Maybe there's some period of time they were waiting out to legally do something else with Prey 2. Or they just couldn't find a developer with the talent or time to do something with Prey 2 until now, since they obviously didn't want to work with Human Head anymore.
Click to expand...

n8rtot said:
I'm not an HH employee. I've known about this for sometime though because I know people at Bethesda. Other people have spoken similar stories. It's Ockham's Razor once you acknowledge the legal complexities.

Besides, instead of snooping me go snoop Zenimax vs. Obsidian, Zenimax vs. Splash Damage, Zenimax vs. inXile, or even Zenimax vs. id Software. The unfortunate part to this is the Internet has a short attention span. A month from now, everything will simmer back down to the status quo and Zenimax will keep on truckin'
Click to expand...

Well at least now we know why it was cancelled.
S

Grief.exe said:
What they showed from the second game was very compelling.

You probably wouldn't be making those statements if you saw this:

Wow, that looks like a lot of fun.
G

Going to add to OP.

Good catch, forgot that this game, with achievements, was found in the Steam Registry.

Why must you torment me!

The game is gone, gone forever! Time to forget.
M

Holy crap, that looks amazing. So deeply disappointed we'll never get to play it.

EuropeOG said:
Why must you torment me!

The game is gone, gone forever! Time to forget.
Click to expand...

If you assume the project hasn't been worked on since 2011 then these are pretty damn slick for early alpha quality.


Never played the first prey but this one looked much more expansive and ambitious. Shame about what became of it.

Looks very bad!
You must log in or register to reply here.

Prince of Persia: The Sands of Time Remake is NOT canceled, but delayed again