We&#8217;re just a bit over a month to E3, and today a source that opted to remain anonymous contacted us to share what he alleges to be Sony Computer Entertainment&#8217;s plans for their press conference.

Our source mentioned that the information comes from contacts within Sony&#8217;s worldwide studios and a further contact at the BBH New York marketing firm, which works with Sony for part of its promotion.

The info reported below is awfully detailed, which is one of the reasons why we decided to publish it, but we were also able to confirm part of it with a second source. The double-sourced information is bolded, so while you should take everything with the customary grain of salt, the bolded parts stand on more solid ground than the rest.
Click to expand... 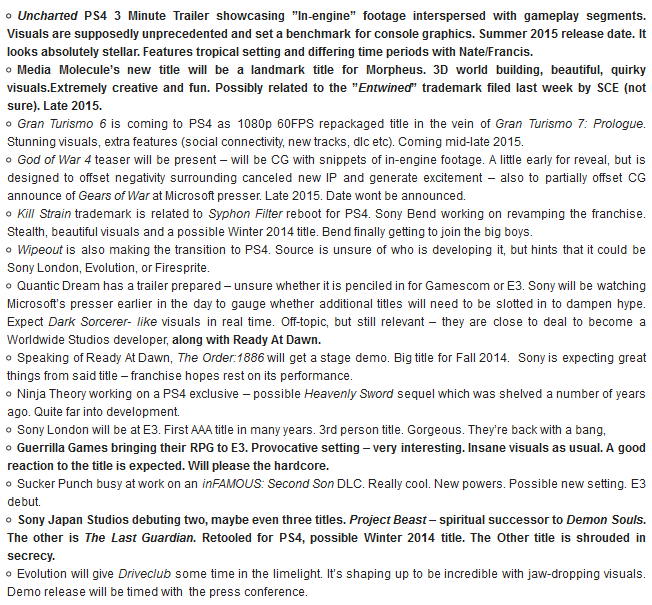 (Update: our source followed up saying that he&#8217;s actually not 100% sure if Rockstar will actually be on stage or Sony will just announce the next generation Ground Theft Auto V on their behalf)

There will also big titles announced for the Instant Game Collection, a segment on Project Morpheus, one on the Sony Entertainment Network and a re-introduction of PlayStation Now. Price drops will also be unveiled for the PS3 and PS Vita.

We&#8217;ll also see several smaller-scale, downloadable titles. PS Vita Vita will get some attention, but not much &#8211; as it&#8217;ll be a PS4 show. PS3 will get a montage and few new titles. Finally, the show will close with a teaser of a sequel of The Last of Us.

Again, everything mentioned above should be taken with the skepticism usually reserved to rumors, but much of it is so specific that it&#8217;s hard to completely disbelieve it. Unfortunately we&#8217;ll have to wait for June to see if everything will check out, but one thing is for sure: Personally I really hope it will, because if this is really what Sony&#8217;s presser will look like, we&#8217;re in for a real treat.
Click to expand...

I knew it was Dualshockers before I even clicked the thread.
R

Just saw this and if true, I'll shit myself.

They claim the information comes from two separate sources - one from within Sony and one from BBH New York.

Anyone know if DualSHOCKERS has a good track record when it comes to stuff like this?

If this is fake, whoever made it is a genius. It's literally everything I want!
R

Sounds like a bunch of fanboy pipe dreams.
B

Edit: Ok, I didn't read the TLG part yet. Seems like bullshit.
J

Damn, this all seems legit. Disappointed it leaked but still super excited for their press conference!

That sounds so fake it hurts, especially the whole "We'll watch the MS conference and see if this needs to be announced".
A

lol too good of a conference to be true.
L

If this is true Gaf will be down for days, but i doubt it. Taking it with a grain of salt.
H

Damn if that's it, i'll be pretty disappointed. Not much exciting other than Project Beast.
L

Too good to be true.
N

If it's real, man. Can't even get a real reveal anymore.

It's crazy how an internal, planned event become common knowledge a month before the actual event.
H

This is making my Xbox cry
M

Even before Sony announces their start time?

NOT BLOODY LIKELY!
B

Too much awesomeness to be true!
M

BUT ITS SO SPECIFIC. It MUST be true.
D

Don't we have some of these lists every year before E3 / Gamescom? Most of them never turn out true.

Reads rather like a whishlist compiled of stuff floating around/expected.

It's missing that Zampala will come on stage, bow to the crowd, show big logo with Titanfall 2 and PS4 and yell "PLEASE BE EXCITED".
C

That would be one gell of a showing.
X

I'm not sure I wanna read it
H

There's too much stuff in there even before considering the third party presence.
B

So Sony is the leaky boat this year then. We'll see how much of this turns out to be true but it looks exciting.
F

Not buying it.
S

This reads like a Sony fans' wildest dreams....which is exactly why I think this is probably too good to be true.
D

AHHHHHHHHHHHH MY BRAIN CANT TAKE THE WAIT UNTIL E3!


Someone make a hype train and throw me on the tracks please.
1

Haha, no, I don't think Sony would kill Vita just like that.
H

I could make up those details myself.
Need more confirmation.

It's just vague and specific enough to be true!
C

Seriously? Why does this sound too good to be true? That list consists mostly of stuff we already know about. Looks really "meh" to me.
T

no kangaroos in austria

too good to be true

Rumor: Rockstar is working on a remaster of all three classic Grand Theft Auto games