Russia accuses Ukraine of terrorism; may be pretext to invade

Russias security service said it had thwarted terrorist attacks in Crimea by Ukrainian military intelligence and beaten back an armed assault by Kievs forces.

The FSB said one of its officers was killed in armed clashes while arresting terrorists on Saturday night while a Russian soldier was killed in clashes with sabotage-terrorist groups sent by the Ukrainian defence ministry on Monday.

Yuriy Tandit, an adviser to the head of Ukraines security agency, denied the allegations, telling Interfax-Ukraine news agency that Kiev had no intention of taking back the territory by force.

The Organisation for Security and Cooperation in Europe (OSCE) monitoring the frontier between mainland Ukraine and Crimea  which Russia annexed in 2014  did not report the incident.

But it said traffic was halted this week and border guards appeared to be on heightened alert.

In its statement the FSB  which controls Russias borders  said it had foiled terrorist attacks on the territory of Crimea prepared by the intelligence directorate of the Ukrainian defence ministry.

It said the aim of the sabotage and terrorist attacks was to destabilise the social and political situation before elections in September in Russia and Crimea.

The security agency said several people had been detained, including a Ukrainian military intelligence officer, and a cache of explosives was discovered in raids on Saturday and Sunday.

On the night of 8 August 2016 special operations forces from the Ukrainian defence ministry carried out two more attempts to make a breakthrough by sabotage-terrorist groups, it said.

The assault included massive firing from the side of the neighbouring state and armoured vehicles, but was beaten back by the Russian authorities, the statement said.

Russia seized the Black Sea region from Ukraine in March 2014 after the Kremlin-backed president Viktor Yanukovych was ousted by pro-EU protests in Kiev.

The move shattered ties between the two ex-Soviet neighbours and resulted in relations between Moscow and the west plummeting to their lowest point since the cold war.

The FSB said it had stepped up security measures around the peninsula following the alleged incidents.
Click to expand...

Ah great, landing in Kiev in a few days.
C

My, would you look at the time, it's "peacefully annex a chunk of Ukraine"-o'clock again. Wonderful.
S

Yeah, it's pretty obvious that this was timed.
S

Must be time for another Russian offensive.
A

How much more of Ukraine is available for Russia to annex?

So when does the invasion start?
C

Time to protect some more Russians in Ukraine I guess. New offensive incoming?
A

AxelFoley said:
How much more of Ukraine is available for Russia to annex?
Click to expand...

All of it, they're not in NATO and they know Europe won't intervene.
P

So let me see. They move lots of troops into Crimea for a "Drill" a few days ago. Then they suddenly start accusing Ukraine of trying to orchestrate terrorist attacks. A nice little excuse for invading. Also a good distraction from Syria and the things not going Russias way there.
A

pulsemyne said:
So let me see. They move lots of troops into Crimea for a "Drill" a few days ago. Then they suddenly start accusing Ukraine of trying to orchestrate terrorist attacks. A nice little excuse for invading. Also a good distraction from Syria and the things not going Russias way there.
Click to expand...

I suspect they'll seize the "rebel"-held Eastern part of Ukraine and consolidate their forces there. If they did that no one would bat an eye.
K

It's the fault of those western aggressors who keep placing their countries in front of Russia's peaceful tanks!

But hey, maybe we get a sequel to the best RDM episode
B

Well that train full of military hardware going to Ukraine can be used now right.......
H

Yeah clearly Putin is about to try some shit.
D

If it was such a big thing why didn't we hear abut it earlier? Or even as it happening?
B

Htown said:
Yeah clearly Putin is about to try some shit.
Click to expand...

Because Russia is always so predictable right? It's saber rattling for Ukraine's upcoming Independence Anniversary.

Need to annex the whole country for safety, stat
F

SG-17 said:
So when does the invasion start?
Click to expand...

2 minutes to midnight.
U

The Russian president said he believes officials in Kiev are trying to provoke a conflict with Moscow, in order to distract the Ukrainian people from the robbery committed against them by their own government.
Click to expand...

There are multiple sources reporting most of this, but the bulletpoints:

1. Cease fire violations are rampant, and fighting in the sepratist regions is ramping up substantially

2. There has been a large number of Russian forces mobilizing along the Eastern border and the Crimean border in particular.

3. Putin himself has accused Ukraine military of an incursion into Crimea-calling it a large scale terror attack-that was thwarted but resulted in deaths. (Provocation for invasion)

I know there is a Ukraine thread but new thread for new news?

Edit: Just saw the other thread, lock if you desire.
P

Russia is absolutely lying and fooling no one, regardless of the existence of paid pro-Kremlin trolls.

Hopefully they don't invade the rest of Ukraine, but since this is Russia, they probably will.

Russia is an enormous threat to the free world.
B

But Lord Trump told me to believe him when he said Russia was not going to get into
(again)
Ukraine!
P

Here is the present situation in Ukraine. 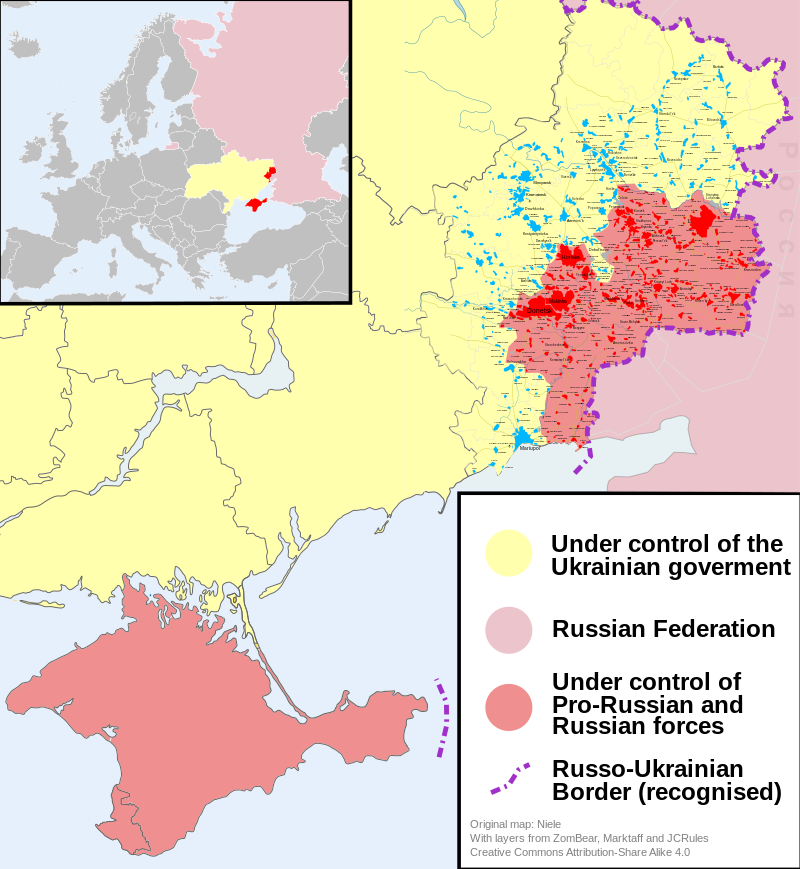 You can see how Russian soldiers already control part of eastern Ukraine, not just Crimea.
R

So Putin is going back to the classics.
https://en.wikipedia.org/wiki/Shelling_of_Mainila
S

Russia's hostility makes it look like a cartoon villain. Evil for evil's sake and maniacal laughs and all.
C

Emboldened by Trump.
U

and brexit, and a departing Obama, and trying to save face after being defeated at aleppo.
S

Wooh! For a moment I thought we were going get through the Olympics without an invasion
O

I was wondering when Russia would try something against Ukraine.
F