Looks like Europe will soon get Rusty's Real Deal Baseball
and the StreetPass puzzle that goes with it
, if that trademark is to believed:

There's also another trademark, for Galaga Assault... no idea what it's for, to be honest. Application is under examination, so that means Bandai-Namco still doesn't have it just yet Also filed last Friday.

Click to expand...
Thanks Pennywise83 for the heads up!
M

OMG, you guys are so lucky. You get to play the Nontendo 4DS before many people!

Here's the OT if you want to read up on some impressions:

Galaga Assault? So there might be a new Galaga game coming?
L

Refyref said:
Galaga Assault? So there might be a new Galaga game coming?
Click to expand...
Beat me. Did a quick Google search, but didn't find anything. A new game maybe (DL-only, probably) or a new compilation.

So, do we get the original Rusty or the ugly American Rusty?

Are the games compatible by the way? Can a JP 3DS get Rusty Streetpasses from the NA version?
L

sakipon said:
So, do we get the original Rusty or the ugly American Rusty?

Are the games compatible by the way? Can a JP 3DS get Rusty Streetpasses from the NA version?
Click to expand...
We'd need a proper announcement, in order to know. My guess is: the NA Rusty.

As for StreetPass, I'm pretty sure they're not region-locked, but I haven't tried with this particular game. Other games are fine.
J

L~A said:
We'd need a proper announcement, in order to know. My guess is: the NA Rusty.

when will the Direct silence end D:
P

About time, it kinda reminds me of Wario Ware with the musics/sounds and stuff.
D

Sweet, was hoping this would come over eventually!

Also, I'm always intrigued by Galaga, so we'll see what that is. There was that Pac-Man & Galaga compilation 3DS. A DL only product sounds more likely in this case, though.
P

Really curious about what Galaga Assault might be; probably an iOS game, though.
S

Hey guys, I just stumbled upon this thread and registered to give you some info on Galaga Assault.

It's an arcade ticket redemption game with a huge vertical screen on it. Probably the machine in total is 8 feet tall... It's really cool looking. Looks to be a repurposed Pac Man Ticket Mania game because I could still see the outline of Pac Man graphics on one of the cabinets.

It plays a modified version of Galaga, with new boss levels interspersed, and the longer you play the more tickets it spits out.

I only played it a few times. Although I'm pretty good at Galaga but I did not play very long on this version of the game at all, partly due to the change in gameplay, and partly due to the fact that the screen is so big, you can't see everything coming at you. But it makes for good viewing for anyone watching behind you.

I have seen the game twice in late summer 2014 in northern Illinois somewhat near where Namco's US arcade factory is located. First place was Party Time Palace in Des Plaines, IL (www.partytimepalace.com) and the other was at KeyLime Cove resort (www.keylimecove.com), across the road from Six Flags in Gurnee, IL.

So there you have it... Hope that helps clear up the mystery. 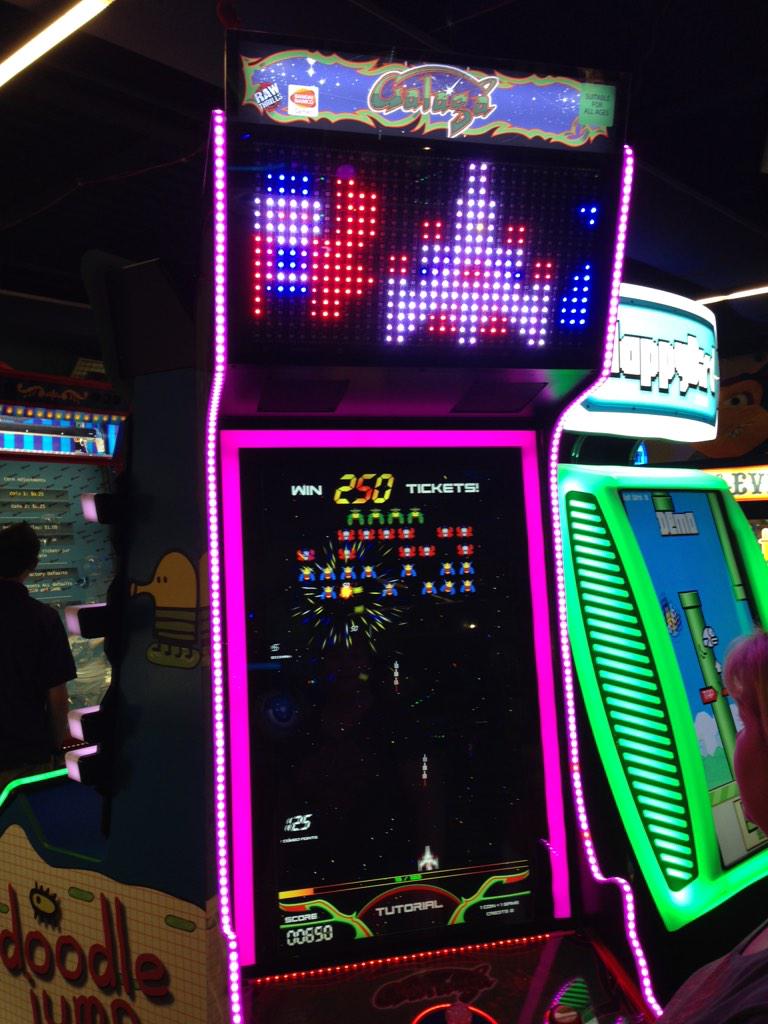