Blizzard DotA apparently won't be out until Heart of the Swarm.

StarCraft II lead producer Chris Sigaty has said that Blizzard DotA is still in development at the company.

We basically put it back up in the shop and did some massive overhauls to some things, which Im not going to go into specific detail about, Sigaty told Joystiq during the first media showcase of the second story chapter for StarCraft II, Heart of the Swarm.

He told the site that it was aiming to have the mod ready for release around the time Heart of the Swarm launches, which looks set to be a 2012 launch.

In terms of it actually requiring HotS to play it, Sigaty went mum.

Were not even talking about the business level decision of it at this point.

Blizzard Dota was one of four mods that was announced during Blizzcon last year for Wings of Liberty. All of those mods bar Dota have since launched.

Its development also ties in with that of true sequel Dota 2, being made by Valve.
Click to expand...


TeamLiquid said:
Q: How long was the production cycle?

A: Ongoing - I've said some numbers in the past. We didn't get started in earnest on HosS until the new year, however, we have been doing art and design concepts since the release of WoL. It's really difficult to say how long the production will be.
Click to expand...


IGN said:
In this campaign she won't simply be a character that walks and talks, but a fully controllable, upgradeable hero unit useable in nearly all of Heart of the Swarm's 20 or so missions.
Click to expand...

IGN said:
According to Blizzard, Wings of Liberty will be required in order to play Heart of the Swarm, at least in North America and Europe, and though there's no final price point it sounds as though Heart of the Swarm will be priced lower than Wings.
Click to expand...

IGN said:
No doubt many have questions about what Blizzard's doing with its multiplayer mode that's popular in competitive gaming circuits like, if you'll excuse the blatant advertisement, the IGN Pro League, but so far that's all being kept under wraps. I can say there will be new multiplayer units and maps in Heart of the Swarm, though no specifics are available. There will also be changes to Battle.net, mostly related to getting an organized Marketplace live so players can easily sort, rate and even purchase user-generated content.
Click to expand...


Eurogamer - Short Snippet said:
Think of the StarCraft series, and you think of multiplayer. Its single-player campaigns are unavoidably overshadowed by the competitive scene, and news that Heart of the Swarm's reveal would be exclusively single-player leads to an irresistible question. Just how important is StarCraft's lore and single-player to StarCraft's fans?

"Incredibly important," begins Dustin Browder, the lead designer of StarCraft II. "And I'll tell you what: I think most of the press ends up reporting on the multiplayer because that is what their fans are reading. But I know that most players just play the campaign. So there's a bit of a disconnect there between what we're talking about and what we're actually doing - a huge percentage of our players are coming just for the campaign."

A huge percentage? "I don't know the exact percentages off the top of my head, but I do know it's well over 80 per cent that play significantly into the campaign." Browder later clarifies that figure, saying he doesn't know exactly how many of Wings of Liberty's players play single-player only, or when they dip into the multiplayer, but his point remains: the perception of StarCraft as multiplayer-only just isn't borne out by the stats. For a silent majority of players, the campaign is a Very Big Deal indeed.

Heart of the Swarm, the second of what will eventually be three StarCraft II games, makes more sense in this context, because the switch to the Zerg as central characters has brought profound change to the campaign: this is now a hero-led RTS. Series staple Sarah Kerrigan, AKA the Queen of Blades AKA the genocidal Zerg leader, is the central focus and player-controlled character throughout HotS (and what a lovely initialism that is).
Click to expand...

Insaniac said:
gameplay vids of sp if it hasn't been posted...

take your pick of whichever outlet
Click to expand...

Here's some of the new singleplayer screenshots released! 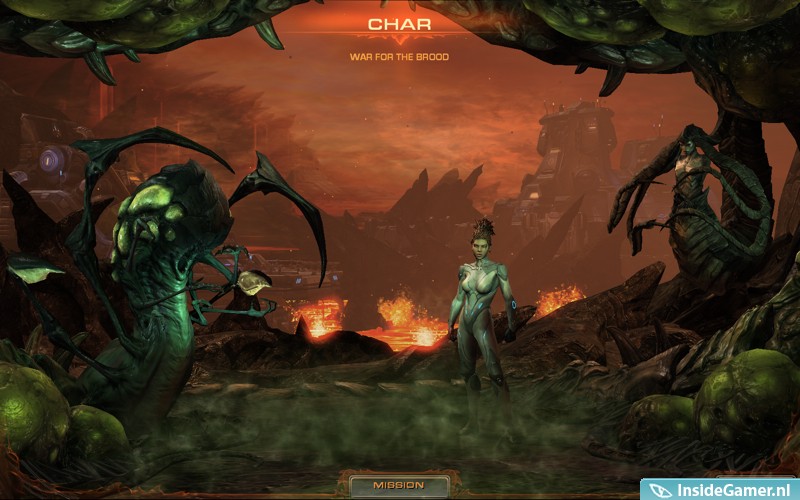 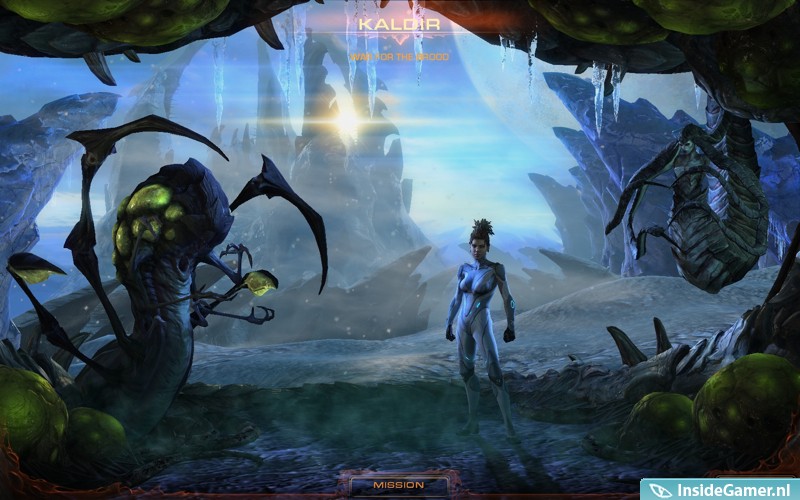 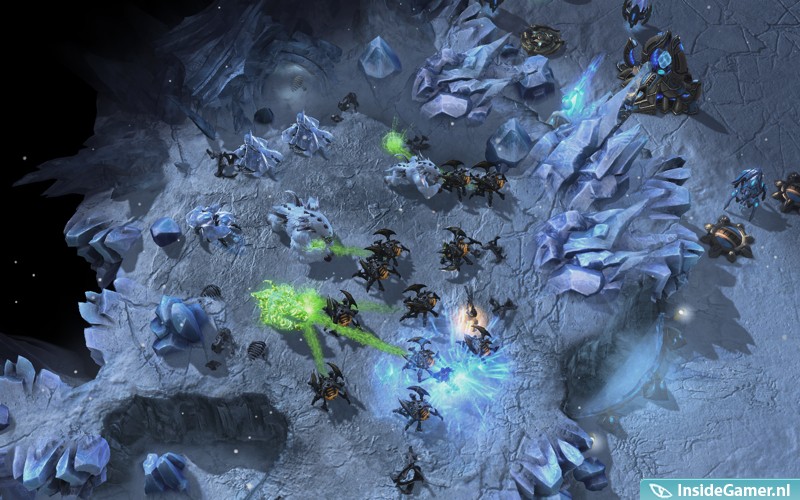 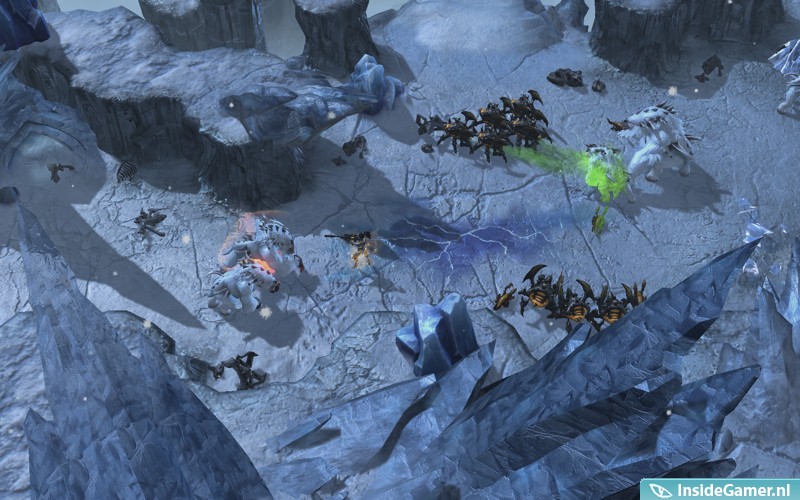 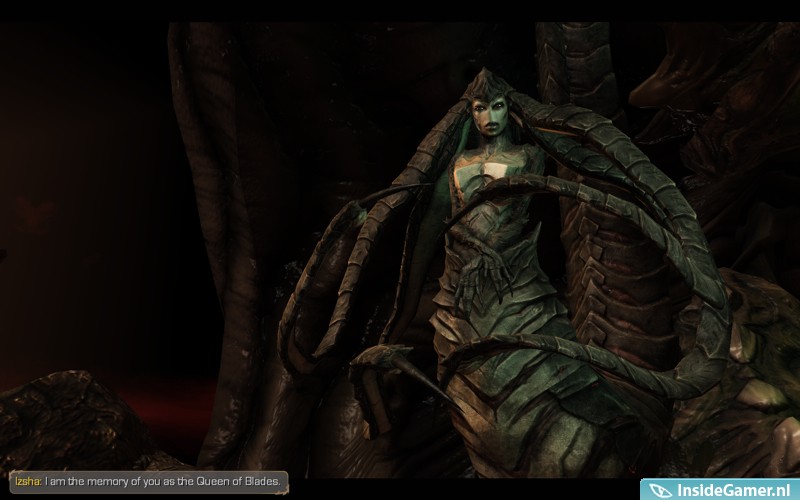 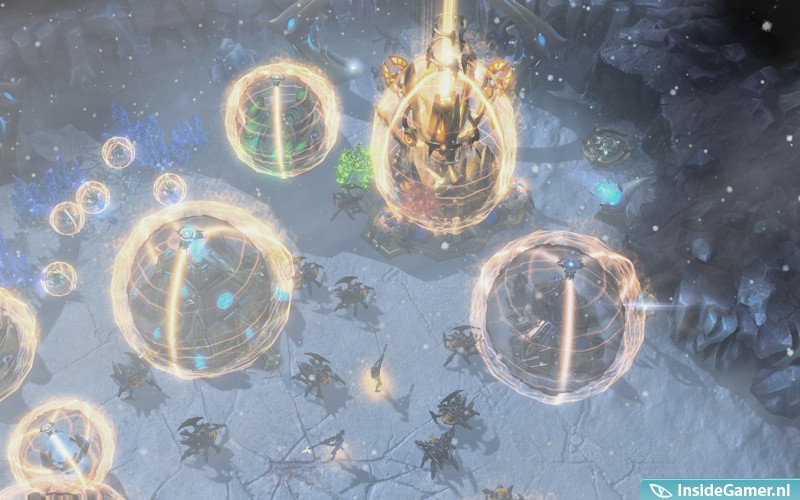 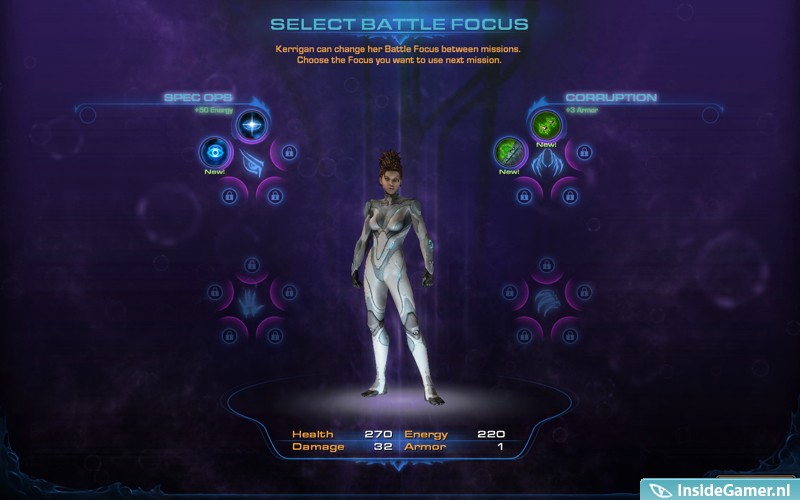 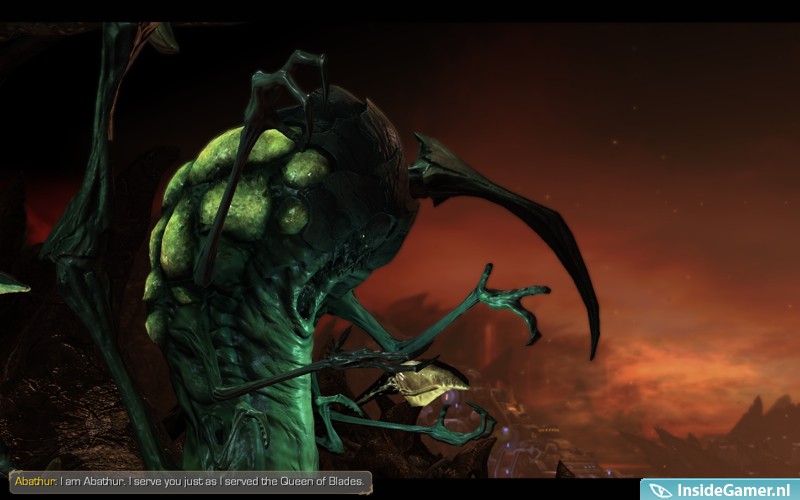 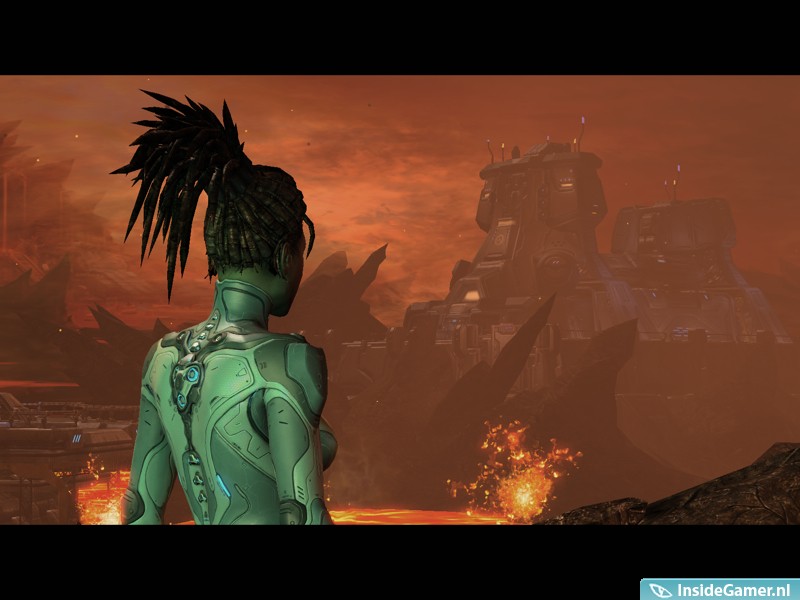 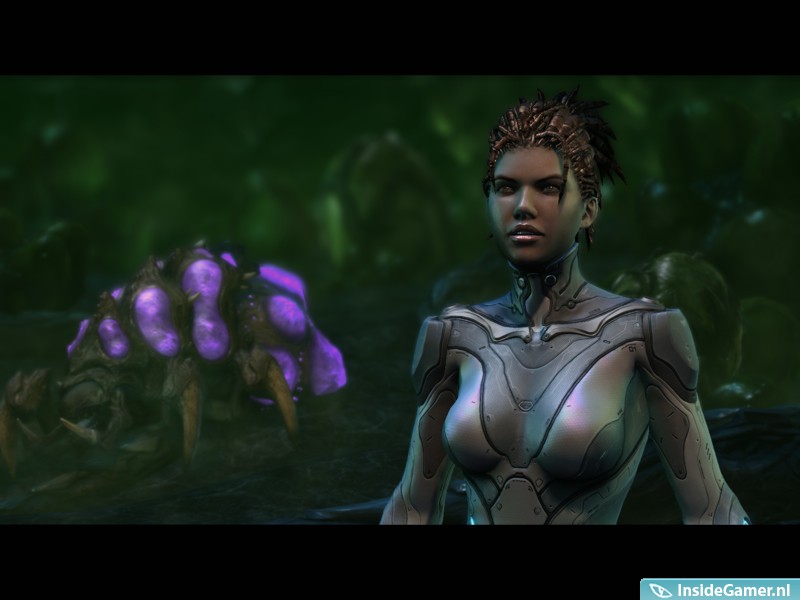 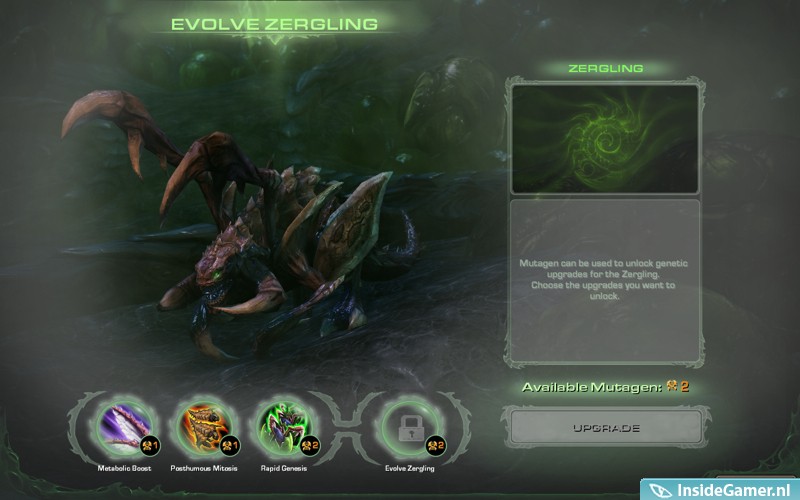 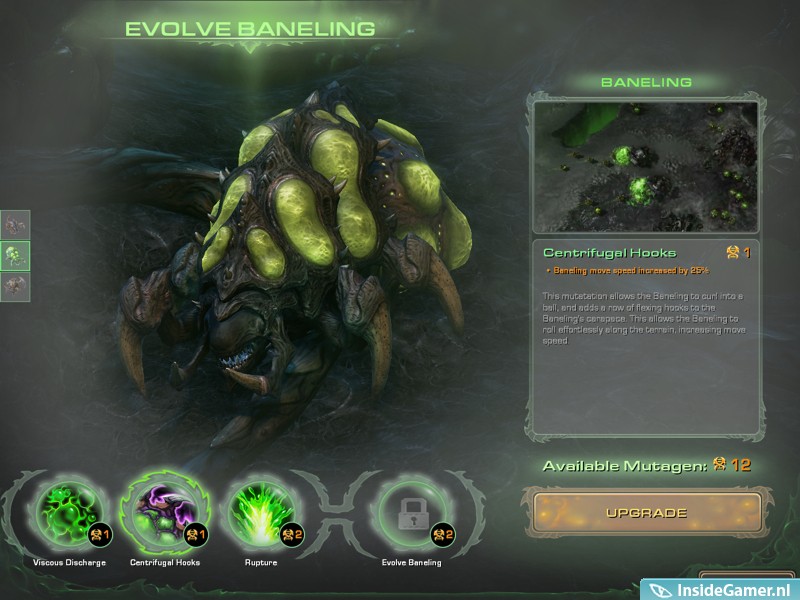 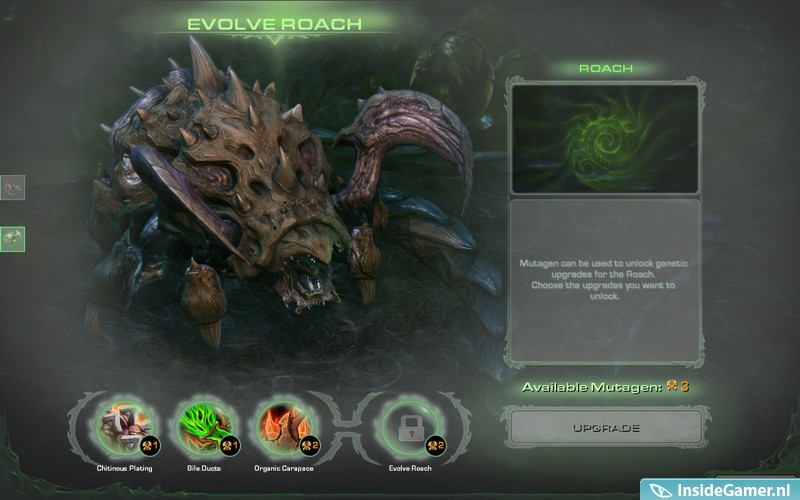 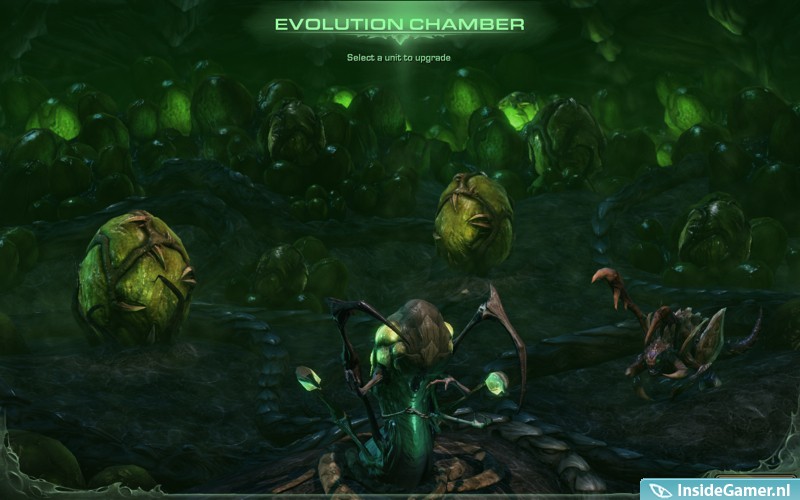 Time to upgrade my PC!
D

So will this be shown at E3 or what?

Boobs of the Swarm.

Love them (I mean, the screens). Still working my way through the terran campaign, and I'm pretty much ecstatic at the way the SP campaign was handled. Heart of the Swarm will be a definite purchase.
N

Dr Eggman said:
So will this be shown at E3 or what?
Click to expand...

Anyone know if this game is going to alter the multiplayer content at all?
D

Tomat said:
Anyone know if this game is going to alter the multiplayer content at all?
Click to expand...

CGI bullshit is the death knell of cinema

I am looking forward to this expansion.

I wonder how many new units there will be for multiplayer.
N

Hmm I think this is the hardest sale of the three. Nasty bugs probably won't sell as well as Terrans and Protoss. I will obviously buy the shit outta this though
M

bbyybb said:
I am looking forward to this expansion.

I wonder how many new units there will be for multiplayer.
Click to expand...

2 I would guess. They don't want to worry about fucking up balance too badly.
M

so they're adding AA?

yeah, definitely need to upgrade *something* for this.
S

Those zergs on Kerrigan's sides are some creepy bastards.

I guess they are cerebrates or something?
M

"I am the memory of you, as the Queen of Blades"
Click to expand...

Yeah, I lol'd pretty hard at that.

Looks like more of the same from this game.
P

Kalnos said:
Yeah, I lol'd pretty hard at that.

SC2 had one of the best single-players of any Blizz game. I'm looking forward to this.
C

Why the fuck can the richest game dev. studio not afford some decent writers, fuck it all.
C

They're really going with the story from Wings of Liberty?

I thought they would say it's a dream and make the story turn dark again.

Honestly they fucked the story up so bad in SC2 I don't really care about the singleplayer at all this time around. Just tell me what's new for multiplayer.
D

Just confirming the irrelevance of everything that happened in WoL.
N

Somnid said:
SC1 had one of the best single-players of any Blizz game. I'm looking forward to this.
Click to expand...

The single-player is embarrassingly bad, anyway. If you want to get into the 1v1 multiplayer community it may be your thing, but I wouldn't touch team games or the campaign mode.


Somnid said:
SC2 had one of the best single-players of any Blizz game. I'm looking forward to this.
Click to expand...

the fact that they're showing single player before multiplayer only proves that Blizzard knows what people really care about.

they just get off on being withholding.
N

I bet it won't be confirmed here.

Shame how SC2 only takes advantage of two cores.

The actual singleplayer campaign is really entertaining and fun... the story however, sucks so hard.
H

For those of you asking, story in Wings of Liberty is interesting up to a point, then it goes full-retard.

But the mechanics in the levels themselves are top notch. Go play it.
E

Kalnos said:
The single-player is embarrassingly bad, anyway. If you want to get into the 1v1 multiplayer community it may be your thing, but I wouldn't touch team games or the campaign mode.
Click to expand...

Lies. Everything about SC2 is great.

Ok except the story...
J

I hope the ending for this is going to be completely different from that in-development leaked ending I saw the other day which was pretty terrible..
J

there is no hope.
K

She looks so stupid now.

So same hub world stuff like in WoL except with a Zerg skin?
M

War for the brood? 25 missions where all you do is make roaches. (the screenshots of actual gameplay are quite honest)
P

hamchan said:
So same hub world stuff like in WoL except with a Zerg skin?
Click to expand...

Well it is the zerg expansion of wol, not sure what you were expecting lol.
F

Live for the swaarm!
P

cubicle47b said:
War for the brood? 25 missions where all you do is make roaches.
Click to expand...

I love seeing the high res models in the upgrade screens. Can't wait for this. Show us lurkers :3
A

The Protoss campaign always had the best storytelling of Starcraft in the original games. Really I see it all coming down to them, as it did for the originals.

Terrain < Zerg < Protoss IMO in terms of campaign storylines for the orignals.

It's too late for the Terrans and possibly the Zerg given what we've gleaned from the leaked script. Perhaps the Zerg campaign may shed more light on the true nature of the Xel'Naga, but from these screens it looks more like it is going in the direction of sitcom bullshit, especially with the 'I AM THE MEMORY OF YOU' screen.

So, fuck the humans and their terrible "we're the center of the universe" bullshit and squabbling for petty political control. Fuck the Zerg TV-trope of having Kerrigan re-confront a force she was just previously in full control of. And I'm not even going to think about Kerrigan's herp-derp resurrection.

Bring on the real masters of the universe. Legacy of the Void will redeem the story.

BELIEVE.
You must log in or register to reply here.