Scott Pilgrim Vs. The World: The Game - New Screenshots & Details

(note: this image is called KimAngstWave.jpg. What a great name for a move.)

gameinformer.com said:
In an early build we played, the game was capped at two players: Scott and Kim. The levels follow along with the book volumes, as world three takes place inside the club where our heroes take on rival band The Clash at Demonhead just like in Scott Pilgrim & the Infinite Sadness. It begins outside when an overly stretched limo pulls out and TCaDs Envy, Todd, and Lynette blow past us amid a flurry of photoflashes. A rush of crazed fans plows over us, during which its totally acceptable to punch them right in the head.

Combat covers all the brawler bases with two attack buttons, blocks, throws, counters, ground strikes, weapons, jumps, dashes, and grapples. You can also taunt, summon a mystical ninja, and resurrect knocked out players, which you dont really see in brawlers. As you defeat enemies, youll gain experience and cash. The former grants you new moves upon leveling up (like an air recovery or spin attack) and the latter can be spent at River City Ransom-esque shops integrated into stages. Items like food and accessories are available here alongside straight up attribute boosts to strength, defense, speed, and willpower. Both Scott and Kim had entirely different movesets, which has us excited to see what Ramona and Stephen can do.
Click to expand...
This sounds fantastic.
A

looks/sounds awesome. too bad it doesn't have online co-op though.
C

Awesome! But boo to lack of online co-op.
B

I recently started getting hyped for the movie so sure, sign me up. It's a sidescrolling beat-em-up so I probably would have bought it anyway.
E

It's apparently being made by the same team that made TMNT for the GBA. I never played it but it's supposed to be really good. Also the first trailer is going to debut on the upcoming episode of GTTV.
J

Fixed2BeBroken said:
but there is no search......
Click to expand...
I totally did use the google box but did not see any new info. My apologies to Solidsnakex.
S

daegan said:
I totally did use the google box but did not see any new info. My apologies to Solidsnakex.
Click to expand...
Don't worry, it appears XiaNaphryz didn't get the memo that we aren't just stuffing everything into big news threads anymore.
Y

http://www.neogaf.com/forum/showthread.php?t=391311
Click to expand...
oorrrr we could avoid making that a mega thread and post new info for EVERYONE to see
R

http://www.neogaf.com/forum/showthread.php?t=391311
Click to expand...
Yeah you should read the posting preferences sometimes.

Totally awesome, but I do wish it had online co-op. If the PSN version is gonna be a timed exclusive I'd love to see them put in online during the wait for the 360 release. Fat chance that'll happen though.
P

sprsk said:
Don't worry, it appears XiaNaphryz didn't get the memo that we aren't just stuffing everything into big news threads anymore.
Click to expand...
The only reason I saw these screens is because of the new thread, so indeed, the memo is a good thing.
I

yencid said:
oorrrr we could avoid making that a mega thread and post new info for EVERYONE to see
Click to expand...
But....but what about my thread!?
H

Paul Robertson animator extraordinar did the art for this game. I'm a bit biased because he did Drawn to Life series and Lock's Quest animations as well. But he is the man.
P

Eric WK said:
In before BenjaminBirdie.
Click to expand...
I'm staying out of this one until "unknown but afterward".

Scott Pilgrim manages to have great art style in all mediums.
S

IGN has posted their preview, the game is going to be released on August 10th

Scott Pilgrim vs. The World: The Game, recounts the events in the first five books in the series and gives a nod to the sixth and final book (not yet released). The basic premise is that Scott Pilgrim (perhaps the biggest loser Toronto has ever seen) has fallen in love with Amazon.ca courier Ramona Flowers. The catch? In order to date Ramona, Scott must defeat her seven evil ex-boyfriends.

A side-scrolling beat-em-up similar to Streets of Rage (but with a higher dosage of WTF?!), Scott Pilgrim vs. The World doesn't look like your typical comic book or movie-licensed game. That's because Scott Pilgrim looks great and plays great.
Click to expand...
Let's take subspace for example. In the comics, at one point, Ramona shows Scott a shortcut through subspace (helpful for delivering Amazon packages quickly). In the E3 demo level, there's a door marked subspace. If all players walk up to it -- BAM -- you are now in subspace. And in the first level, that means a colorful rainbow walkway with giant piggy banks hopping around waiting to be destroyed so you can collect their precious coins. The subspace really is a shortcut through part of the level. Use it if you wish.

Another fun one is holding down the heavy attack button to perform a taunt. Okay, seen that before. But if two players get close and both taunt, they will whip out instruments and start playing a song. Get all four players together and you rock out with a full performance, laying the thunder down on nearby enemies. It's wild stuff that fits perfectly into what a Scott Pilgrim fan would expect, but which will probably surprise (or shock) and hopefully delight newcomers. Look, I'm a big time Scott Pilgrim fanboy, so pardon my excitement. But after playing one level, it sure feels like Ubisoft Montreal got this right.
Click to expand...
As I said earlier, each character has his or her own set of moves. These moves are unlocked as you level up (achieved by a combination of kicking the crap out of people and spending some coin in nearby shops). Though there is a menu to browse in shops, you'll be purchasing different snacks to nom, each of which has different affects on your stats. I didn't have the chance to get a good look at the stats breakdown, but at the very least, you will benefit from kicking a lot of butt and collecting the coins that spill out of enemies.
Click to expand...
http://ps3.ign.com/articles/109/1095778p1.html 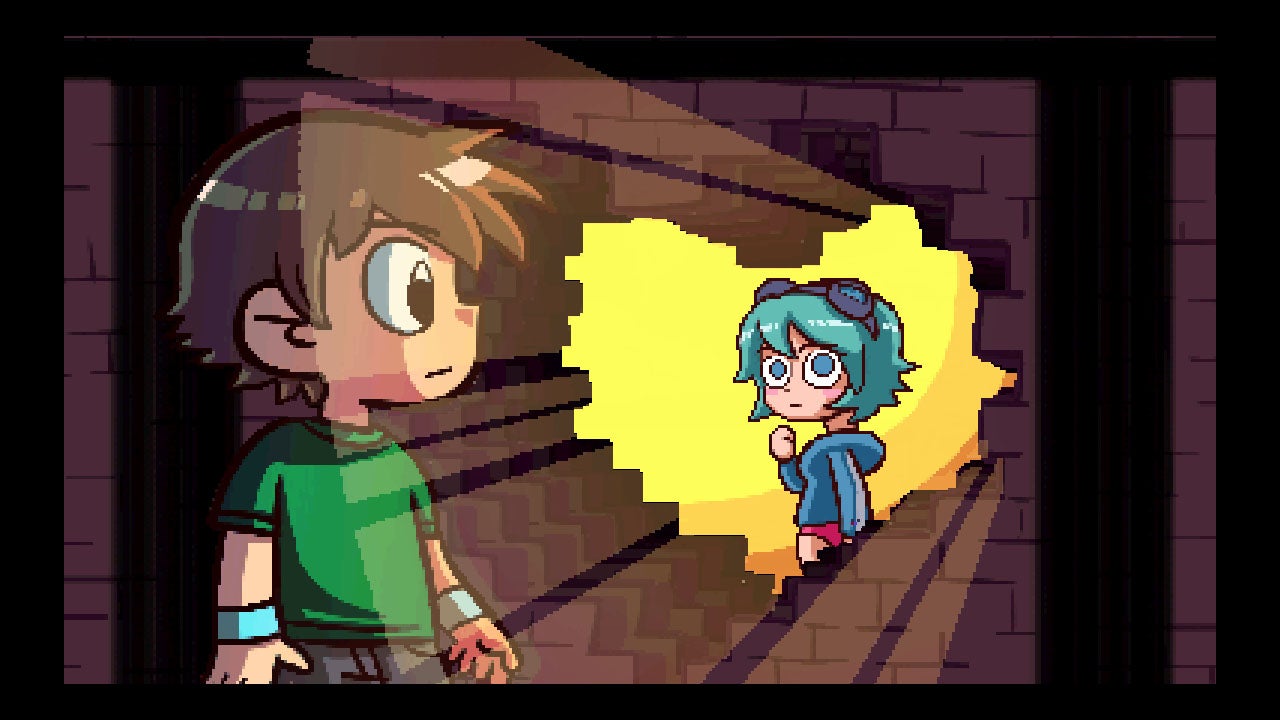 The same team that did GBA TMNT did this? Day. One.

TMNT on the GBA is one of the best beat-em-ups in years.
S

i hope it's good

FunnyBunny said:
The same team that did GBA TMNT did this? Day. One.

TMNT on the GBA is one of the best beat-em-ups in years.
Click to expand...
I still need to find myself a copy of that. I've heard it's great.
J

We should've got an animated movie instead of live action. This looks awesome.
S

day one. i think the xbla arcade version will be released after the summer of arcade.
H

The basic premise is that Scott Pilgrim (perhaps the biggest loser Toronto has ever seen) has fallen in love with Amazon.ca courier Ramona Flowers. The catch? In order to date Ramona, Scott must defeat her seven evil ex-boyfriends.
Click to expand...
Why does everyone call Scott Pilgrim a loser when he sleeps with multiple women, is a really great fighter and is just generally awesome?
S

hamchan said:
Why does everyone call Scott Pilgrim a loser
Click to expand...
because he's a jobless manchild
K

i dont have 4 controllers but i do have an 2 ps3 compatible joy sticks. cant wait.
F

DoctorWho said:
I still need to find myself a copy of that. I've heard it's great.
Click to expand...
I don't want to derail the thread, but it is terrific. Grab a copy on EBay or Amazon and you won't be disappointed.
A

YES! YES! ALL OVER MY FACE! I'm gonna go jerk off to Kim Pine. brbthx
A

Is it bad that I have no idea who Scott Pilgrim is but I look at those screens and think, "Yes, a game like Kings of Power 4 Billion Percent."
G

More Fun To Compute said:
Is it bad that I have no idea who Scott Pilgrim is but I look at those screens and think, "Yes, a game like Kings of Power 4 Billion Percent."
Click to expand...
The sprite work is by Paul Robertson, so no, that's the same thing I was thinking!

And on a related but more controversial note, I think this game should have some sort of card/roulette system so you never get the same special move twice.
A

GAME OF THE YEAR
S hamchan said:
Why does everyone call Scott Pilgrim a loser
Click to expand...
Because he is played by Michael Cera in the movie...
H

This would be so good on the PSP. Come on Ubisoft!
X