Internet cretins engaged in a harassment campaign against a woman who worked for Electronic Arts this weekend, flooding her social media and various internet profiles with vitriolic, often misogynistic messages. Her sin, it appears, was working on animations for the game Mass Effect: Andromeda.

Allie Rose-Marie Leost, who worked for EAs motion-capture labs in Vancouver, saw vicious harassment on Twitter and other websites today, most often from people who blamed her for Andromedas awkward facial animations. The harassment appears to have been primarily triggered by a vile blog post at Ralph Retort, a right-wing, GamerGate-tied website, that claimed Leost was the lead facial animator on Andromeda. That website also accused her of performing sexual acts to get her job at EA.

Heres a small sample of the hundreds of messages Leost faced today:
Click to expand...

More at the link:
http://kotaku.com/scumbags-harass-w...m_source=Kotaku_Twitter&utm_medium=Socialflow
M

Filing this under disgusting shit.
L

Wow, that is disgusting.
M

Blame the company not individuals that probably worked their ass off doing the best they could.
G

Ugghh some of the gaming community is the most toxic shit on the planet. Ashamed.
J

Yeah there's a ton more and she may not have actually worked there if I read Bioware's statement correctly?

Read some guy saying whether she did or not she should be "shunned" from gaming and what they hell does that even mean? What the fuck is wrong with us? Why would it ever be ok to treat a real live human being like this over a stupid video game? 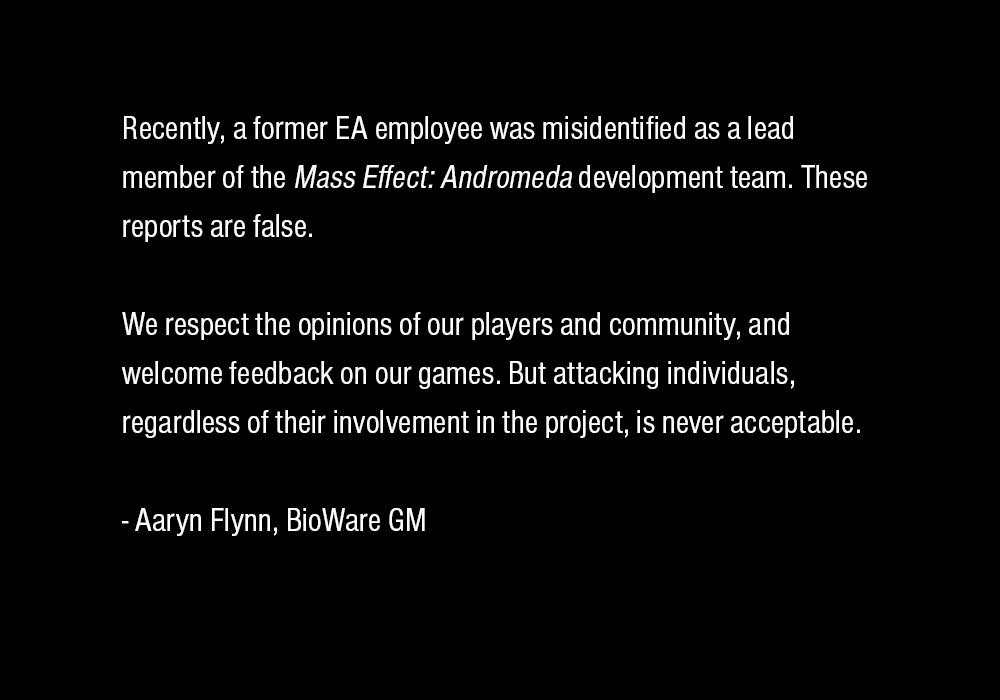 A grim reminder that for all the progress we've made, gaming is still a very toxic community.

This is why people think gamers are losers and idiots.
R

Even someone here tried to start something. Sad.
C

And somehow we keep wondering why a lot of people view gaming as a hobby for kids. Shameful behavior...
D

I'm shocked this would come from the gaming community over some silly faces sometimes.


Not that shocked
M

It's actually about ehtics in face animations.
L

Somehow I feel like these people would be harassing women with or without Mass Effect Andromeda's animations. I don't think they're really all that upset.


MercuryLS3 said:
This is why people think gamers are losers and idiots.
Click to expand...

Unfortunately, a lot of gamers are losers and idiots, and a lot of the spaces they operate in don't want to deal with that (or don't care).
R

It's about Ethics in Game Animation, I'm sure.

That first one in the screenshot above makes my stomach turn. This isn't gaming, it's fucking criminal and revolting. I'm not even sure you could call it human.


Com_Raven said:
And somehow we keep wondering why a lot of people view gaming as a hobby for kids. Shameful behavior...
Click to expand...

Even children aren't this cruel.
S

Sat alone in a boggy marsh

Worse part is they got the wrong person

I get people are upset that a game they liked may not be up to standard, but how sad do you have to be to go out of your way to harass someone online

Just don't get how or why you would do this.... Wish people would face real world consequences more when they hide behind a keyboard and spout this bullshit.
T

And people still deny that gaming has a misogyny problem.

"B-but society has a misogyny problem!!"

You don't see this level of vitriol, scapegoatism, and aggression towards women who work in non-tech sector jobs. No woman who works in gaming is safe.
J

Fuck. Even if they had the right person, this is an absolute disgrace. Whatever your thoughts are on a product, harassing or brigading a person that contributed to it is downright deplorable.
G

Worse part is they got the wrong person

Targeting someone who was working on motion capture doesn't make sense to me to begin with since those faces are clearly not motion captured.

The reactions are disgusting bullshit. Even if she made every charakter look like Steve Urkle she wouldn't deserve that treatment, she didn't kill someone and it's only a fucking videogame.

That said some of the animations are really hilarious.
A

These GG fucktards can die in a fire

It's embarrassing to share the same hobby as these clowns. But I'm not surprised after the recent locked review threads on here for similar reasons.
K

Another week, another incident of 'gamers' doing abhorrent shit.
C

True Fire said:
You don't see this level of vitriol, scapegoatism, and aggression towards women who work in non-tech sector jobs. No woman who works in gaming is safe.
Click to expand...

Welcome to internet free of consequence and that all. Just imagine what is said behind closed doors or why certain things don't go to certain people.

But it's time for a circle jerk because of idiots on the twitter. Lets paint a whole community with a big brush though...
G

That first tweet made me sick to my stomach. Wtf, why do these people think this is okay?
D

Ill bet these kind of people doesn't understand how many hours and sleep nights to make a game like this?? Yes they've mistakes on animations they're trying the best to fix it.
N

True Fire said:
And people still deny that gaming has a misogyny problem.

"B-but society has a misogyny problem!!"

You don't see this level of vitriol, scapegoatism, and aggression towards women who work in non-tech sector jobs. No woman who works in gaming is safe.
Click to expand...

This is seeing #daywithoutawoman widely adopted and celebrated by industry peeps was important, despite what some certain high profile jerk offs in the industry might tell you.
T

Embarrassing and infuriating. I know an official response from BioWare has to be professional but I still wish they tore into those cowardly idiots hiding behind twitter handles.
A

This is why i'm fine with people getting jail time for internet harassment and trolling. SMH, these guys are scum.
S

jackal27 said:
What the fuck is wrong with us?
Click to expand...

Don't worry, you're not one of the fuckheads doing this.

Gamergaters at it again, huh? Stupid fucking idiots. At least these remind me that there indeed are a plethora of losers more pathetic than I am.
T

She said on her profile that she worked on Mass Effect A. as a lead. Bioware now said that she didn't, so someone is probably lying. Doesn't matter though, because some of the reactions are disgusting either way.
J

the right wing needs to be gone top to bottom
C

HaloRose said:
Yes they've mistakes on animations they're trying the best to fix it.
Click to expand...

Where did you see this conformation? in any case good luck to those people with the task of fixing fundamental body rig, facial rig and animation state problems. Most likely across the whole game.

TwilightPrincess said:
She said on her profile that she worked on Mass Effect A. as a lead. Bioware now said that she didn't, so someone is probably lying. Doesn't matter though, because some of the reactions are disgusting either way.
Click to expand...

well yah, now that I think about it, someone's probably lying.

and yes that's beside the point. The reactions are indeed disgusting.
M

Pathetic in every way.
P

Yeah that's pretty fucked up. Killing anomnity would solve this.

Actually wouldn't need killing anomnity. Would just mean if people are pricks they get shown as pricks.
O

These guys can screw off. Andromeda's animations aren't great and have a lot of issues presentation wise but that's a completely immature reaction to harass the individual. Just why?
D

What a bunch of sad fucks. Not a shock at all that the shithole that is the Ralph Retort is involved with this.
You must log in or register to reply here.

What do you want to see in Mass Effect 4?
Social Opinion 2 3

JumpMan1981 replied
Aug 17, 2021
Mass Effect Andromeda Had Designs For Up To Ten New Alien Species, But They Were Cut For Budget, Scope, And... Cosplay
Opinion Game Dev