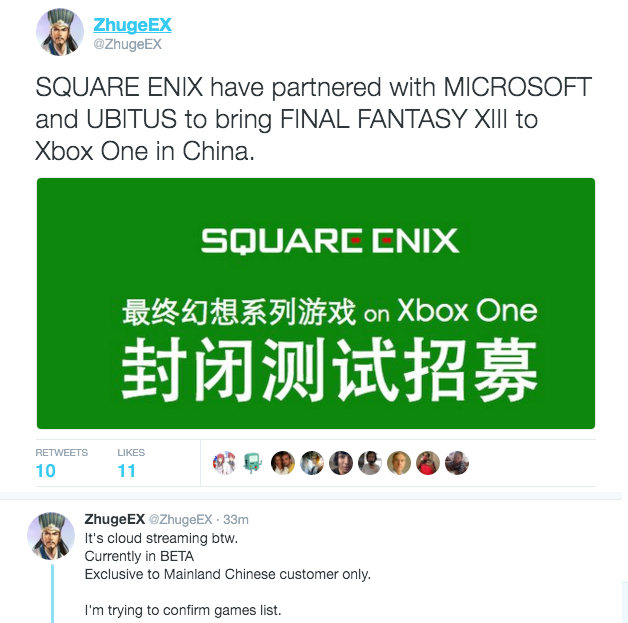 It seems that Square Enix, who partnered with Ubitus for FF13 on Chromecast etc..., are partnering with Shanghai Oriental Pearl to bring Final Fantasy games to Xbox One (and maybe PS4?) via cloud streaming.

Xbox China are looking for 400 participants to BETA test Final Fantasy 13 on Xbox One via cloud streaming. And it seems that a cloud game version of Final Fantasy XV may also be in the works.
In other words Ubitus are creating the cloud version of the game, and users download an app after that they can stream the game using internet.
This stuff is common in Japan on Mobile where FF13 can be streamed to mobile devices etc... so it's probably similar solution but on consoles.

No details about the games other than FFXIII, but it's currently in BETA and it's exclusive to mainland Chinese customer only for now.

Huge thanks to ZhugeEx for the translation.

Lock if old.
B

I guess that's why they shut down Shinra Technologies then. No point in SE owning the streaming cloud themselves.
D

Lightning + the power of Cloud.

A storm is coming.
B

You'd think they'd do this on PC, not XB One.
R

Why stream the games? just port them from the PC version
K

I'm telling you, FFXV will have a streamed mobile version with one of the Battle Modes with "Hold Button To Attack/Dodge" as default suiting touchscreen controls.
R

Interesting. That guy gets quoted a lot on GAF. Would be nice if he were here to talk about it at length.
D

The Last One said:
Lightning + the power of Cloud.

Actually I think it's a squall.

Hoje0308 said:
Interesting. That guy gets quoted a lot on GAF. Would be nice if he were here to talk about it at length.
Click to expand...

R10Neymarfan said:
Why stream the games? just port them from the PC version
Click to expand...

Maybe they feel there's potential for streaming services like this in the Chinese market. I mean, all you need is 1% of the population and you're golden.
R