Shadow the Hedgehog - Shadows of the Past

When I was a child around the time of this game's release, I ADORED this game. I thought Shadow was the goddamn coolest thing ever conceived. It's pretty funny to look back on the game now.
A

Played this for the first time with a friend this past weekend and we both just about died laughing during the intro. The sky opens up and alien horrors start pouring through and attacking the city, and off in the distance Shadow is just all "Man, fuck those weak ass humans anyway" and starts to walk away lollllllll. I need to finish this soon.
B

As mentioned, this game isn't the worst thing ever if you just do a vanilla run-through (though it certainly still isn't good, if only due to the controls if nothing else), but when you do the work required for the "True Ending"... it's worse than 06, IMO (though I'd actually call Boom the worst of the unholy trinity of crap). Ugh.

You covered most of the worst stuff, though I want to add how stupid melee weapons are in this game. IE that they have ammo, and usually a very low amount, and are just all around useless compared to the guns. It's like, why bother picking up this stop sign with 5 ammo that requires you to get close to the enemy, too? Oh, and because of the guns of course they did the Heroes thing of making the enemies take multiple homing attack hits, which is awful enough normally, but it's even worse considering how bad the homing attack is in this game. It has a REAL nasty tendency to send you flying off the stage randomly.

Also, man the "Prison Island" in this game (which somehow turned into this after being blown up) is ugly (and I know they reused the assets for at least one other super ugly level with a ton of copy/past architecture, ie the godawful one with the time bombs): 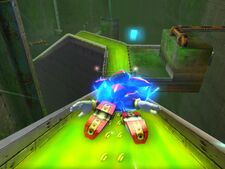 And that screenshot reminds me: gotta love that the hero power is just skipping a large chunk of the level. Which would sound lame in any other game, but the ability to make this game go faster is definitely appreciated.

Still, there's some comedy to be had here at least. Like the bullet sounds on the menu. Or, as mentioned, the terrible cutscenes. (I particularly like the one with the kid version of the general with the two different eyes shaking in terror, as it just looked so incredibly ridiculous.

Edit: Also, that motorcycle that's all over the packaging and promotion and intro is incredibly rare. I think it only appears normally in one level, and then maybe in one additional one if you get all the keys? And there's the coop feature that I straight up didn't know about. Was playing this with a friend trading off, and all this time he could've been Charmy the Bee and all that crap!
You must log in or register to reply here.