From the conference call:
https://www.sony.com/en/SonyInfo/IR/library/presen/er/pdf/22q2_sonyspeech.pdf 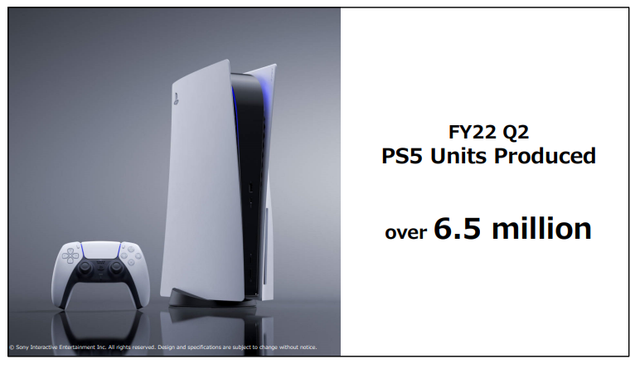 Restrictions on the supply of materials and logistics affecting the production of PS5 hardware have “significantly eased” and Sony managed to produce 6.5 million during the quarter, progressing faster than planned.
Demand from customers continues to be strong, and in September, it took an average of 17.5 hours to sell out 100,000 units after their delivery at retail stores in the US.

Later in the call, Totoki-san mentioned that Sony hasn’t seen any dampening of said demand due to the price hike for PS5 in some regions.

To meet this strong demand, Sony plans to do its utmost to bring forward supply into the year and the Holiday season and aims to exceed its previously announced full-year forecast of 18 million units (which would bring the total to 37.3 million units by March 2023).

Totoki-san also repeated that the target for the next fiscal year is to surpass 23 million units, keeping ahead of PS4.
Sony expects a similar performance for God of War Ragnarok compared to the previous game, which sold 23 million units cumulatively to date.
We also hear that Bungie’s collaboration with PlayStation Studios is going well.
Totoki-san also added that sales of the PC version of Marvel’s Spider-Man “approached the highest level ever” for a PC game released by Sony.
Sony is pursuing various initiatives to increase user engagement and re-accelerate the growth of the game business from both the hardware and software perspectives. The company expects to see the results of these efforts to become apparent in sales and profit from the second half of the fiscal year (between October 2022 and March 2023) and in the next fiscal year.
Click to expand...

I think this is interesting because they have been stockpiling lots of units there weren't shipped during the quarter.
Also as expected price increase had no effect on demand.

Won't all this supply hurt their number one buyers, scalpers? How could Sony do this to such ardent supporters?

It's also interesting to note that the forecast for next year is over 23m.
That could put in perspective the rumors about the model with the detachable drive and 30m forecast. It's not accurate.

Also it seems like they've realized they need to focus on PS5 and leave the PS4 behind:

• The number of PlayStation Plus subscriber accounts at the end of September decreased 4% from the end of June to 45.4 million accounts. We see that this decrease results from a greater decline in user engagement among PlayStation 4 (PS4) users than expected.
• On the other hand, the ratio of PS Plus subscribers among PlayStation 5 (PS5) users remains at a level significantly higher than that of PS4. We are putting even more effort into accelerating the penetration of PS5 hardware to recover this user engagement going forward.
Click to expand...

If PS5 doesn't replace PS4 quickly it will hurt engagement and the number of PS+ users so they're working on accelerating that.
Last edited: Nov 1, 2022
You must log in or register to reply here.

FalsettoVibe replied
Oct 24, 2022
Sony is Working to Increase PS5 Supply in Time for the Holidays
News 2 3