It's been a long time since we published a leak. Last year we leaked the entire Microsoft E3 Conference e some unannounced titles (Spiderman for PS4, Crash Bandicoot HD Remake, Watch Dogs 2's protagonist, etc.). We also promised to reveal some information about Santa Monica's cancelled IP for PS4. So, here we are, ready to share with you these info.
Searching on the web, we spotted a interesting portfolio website about a former Game Developer & 3D Concept Designer: Erik San Juan. He worked at Santa Monica for: Kinetica (PS2), God of War (PS2), God of War II, God of War III (PS3), God of War Collection (PS3), God of War Saga (PS3) and God of War Ascension (PS3), until April 2014.

Looking at his resume we see he also worked for:

What is the name of this project? We don't know, but we spotted a lot of concept art published by the game designer. In order to avoid copywriting infringements, we won't publish these concept arts, but if you are good at searching for, you can find them.

Here are the information we collected:

The game is ”Cancelled", at the moment, and many developers have left Sony Santa Monica for this reason.
Click to expand...

And if you go on Erik San Juan website, just add the url and voilà!

I think the concept arts are the ones called "ESJ_Cancelled_***"
A

This the destiny like game that sony cancelled, in part to gain favor from acti?

Aw come on that looks amazing

And if you go on Erik San Juan website, just add the url and voilà!

I think the concept arts are the ones called "ESJ_Cancelled_***"
Click to expand...

And the ones marked "Darkside" as that was rumored to be the name, and the photos say they're from the cancelled game.
G

TheRatedD said:
And the ones marked "Darkside" as that was rumored to be the name, and the photos say they're from the cancelled game.
Click to expand... 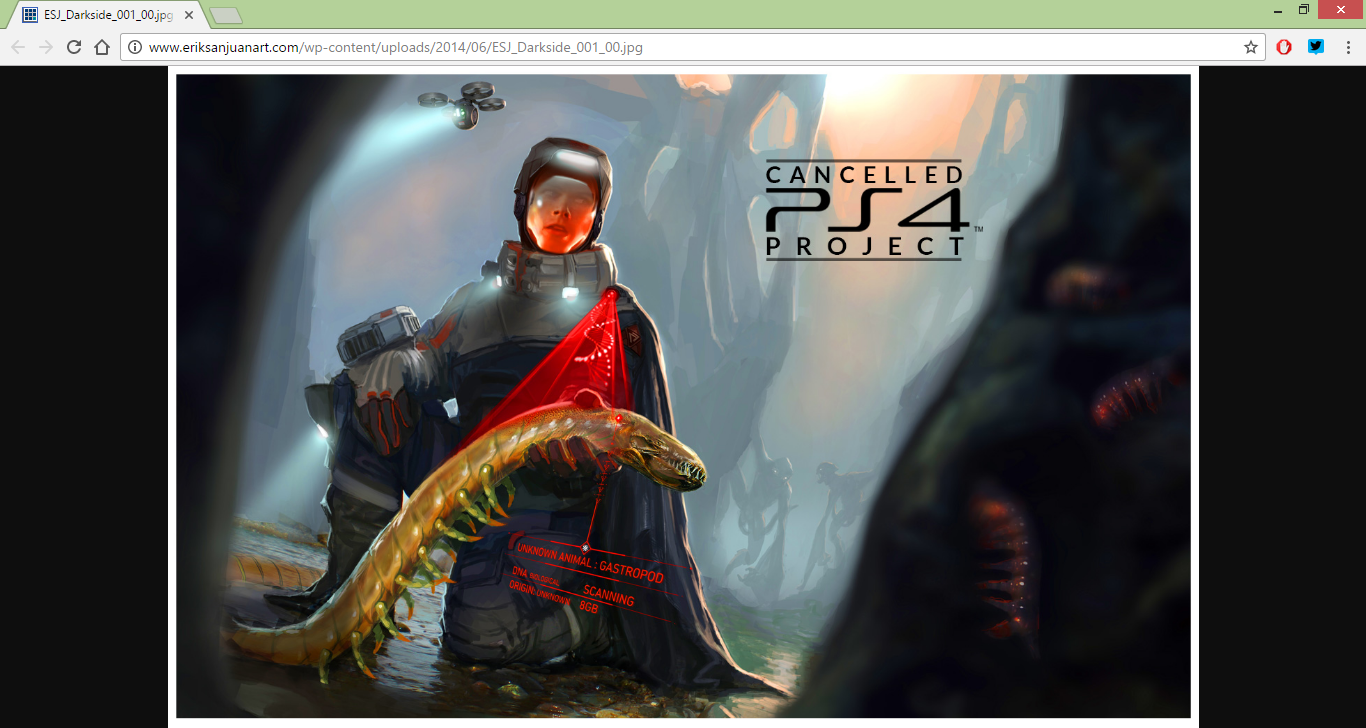 WAIT !!!!, Thought it was just MS who cancelled IP
E

I find it funny that this thread was made when the other thread is on the front page....
N

Yoooooo! Im feeling that concept art. Would have loved to have seen this in motion. Dudes got talent.
G

EDarkness said:
I find it funny that this thread was made when the other thread is on the front page....
Click to expand...

Companies cancel many projects. Time and time again. Ms games were announced and shown multiple times. Then cancelled. This wasn't even presented to the public. Jeez you're not even subtle.
E

These are probably the unicorns

As always MS defense force quick on the draw.
D

Get_craycray said:
I gathered every concept arts related to this on imgur (if it were to be deleted)

Thanks! Really like this art style. I'm kinda sad this is cancelled

Footos22 said:
Companies cancel many projects. Time and time again. Ms games were announced and shown time and time again then cancelled. This wasn't even presented to the public. Jeez you're not even subtle.
Click to expand...

fish effect
reminds me of star wars too

The concept art or the description there doesn't sound too great, imo. Shame about the people who lost their jobs though.
D 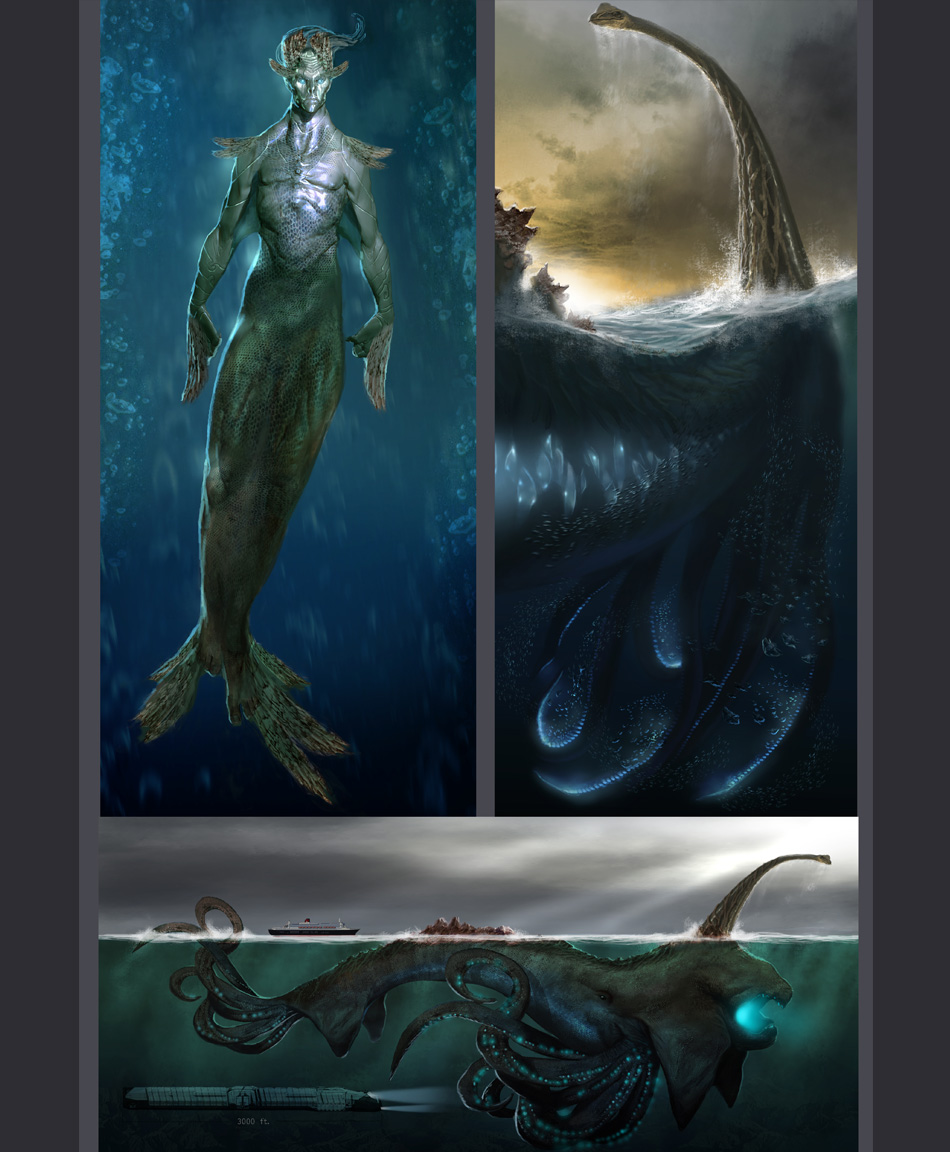 The art looks a bit unfocused. I have trouble believing that all of it is from the same project.
D

woah that artwork is all over the place.
G

Concept art looks super interesting. Looks like it was gonna be a pretty massive game. Kinda reminds me more of Mass Effect than Destiny.

This looks weird. But not the good kind of weird.

A kind of "yeah, not surprised this was cancelled" kind of weird. Looks like a mish mash of just a bunch of shit.
S

This is an interesting concept
S

That concept art looks all over the place and pretty amateurish.
T

Definitely like like a game still figuring itself out based on these images. Upset about no new IP but we don't know much to go on.

Looks really cool, hope they can salvage some stuff and turn it into something some day
T

This one is amazin

I cant believe this has been cancelled. So much potential...

Holy shit, getting major Destiny vibes from all that art.
L

Is this the second Santa Monica game in a row to get cancelled following Stig's project?
N

LongDongJunon said:
Is this the second Santa Monica game in a row to get cancelled following Stig's project?
Click to expand...

I believe this is Stig's game.
M

This looks cool. Wonder if it would've been a good game.
N

Falchion said:
Holy shit, getting major Destiny vibes from all that art.
Click to expand...

IIRC it was supposed to be similar.
M

This looked sick.
B

Oh yeah I see why this got canned

Not feeling it actually just off the concept art. It doesn't look cohesive but then again it is concept art and not the actual game. Just seems very erratic as some stuff like gritty and modern but others look like a fantasy game with fantasy creatures while some others look like scifi shooter war based stuff.
E

Going by the concept art this looks a ton more interesting than what we got with Destiny. Gives a feeling that there could be different planets with different styles and things like that.
N

Seems quite Mass Effect to me.
S

Like others have mentioned, the art is kind of all over the place. But those giant monster/alien designs are sick
T

It definitely looks like a canceled game. It lacks an identity.
You must log in or register to reply here.

davidjaffe replied
Sep 13, 2021
Santa Monica Studio is currently "spread out on a lot of different things"