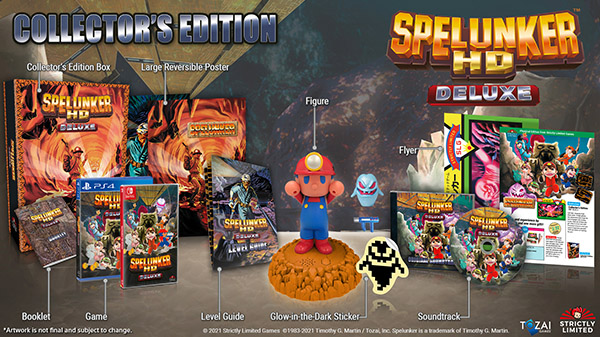 ININ Games will release Spelunker HD Deluxe for PlayStation 4 and Switch digitally in the west in Q3 2021, the publisher announced. In Japan, where the game is known as Ganso Minna de Spelunker…

ININ Games will release Spelunker HD Deluxe for PlayStation 4 and Switch digitally in the west in Q3 2021, the publisher announced.

In Japan, where the game is known as Ganso Minna de Spelunker, Spelunker HD Deluxe will launch for PlayStation 4 and Switch on July 15.

Here is an overview of the game, via Strictly Limited Games:

Dedicated retro game fans might remember the original game, which was first released for Atari 8bit computers back in 1983. Or also the PlayStation Award-winning Spelunker HD that was released for PlayStation 3. And now Strictly Limited Games proudly presents Spelunker HD Deluxe coming with awesome fresh graphics and a new game mode!
A variety of game modes and many different stages will provide players with a lot of challenges on their way to seek out the mystery that lies in the depths. All of the modes can be played as single player, but they are also supporting online multiplayer with up to six people and offline multiplayer with up to four people allowing the players to explore the caves together!
Whilst exploring dark caves and avoiding getting beaten by the dangers that lurk in the depths, players can enjoy a fresh visual appeal with new 3D assets and a realistic cave atmosphere, accompanied by a catchy, memorable soundtrack. But those who prefer to keep it classic, will also get their money’s worth—the well-received “Classic Mode” that was also included in the PlayStation 3 version will still be available in Spelunker HD Deluxe. So retro fans can enjoy beautiful nostalgic pixel graphics and 8-bit sound for the original Spelunker experience like back in the early 80s.
Click to expand...

Wow, this is fantastic. I always loved Spelunker on my Atari 800XL and even though the NES version was a touch spotty, the music was endlessly memorable. I'm glad to hear that melody again in this remake. I would totally buy this when it comes out.

It's cool they kept the shitty 8bit version in there.

PleaseWaitStation4 said:
It's cool they kept the shitty 8bit version in there.
Click to expand...

One of the earliest cave exploring games is back - Spelunker HD Deluxe comes with shiny HD graphics and a challenging adventure in a world of caves and the mysteries they hold!
Click to expand...

Same trailer but with the launch date of August 6
You must log in or register to reply here.