Big News: @SquareEnix and @Marvel announce a multi-game partnership leading with The Avengers project. #Reassemble
Click to expand...
Crystal Dynamics and Eidos are working on it.

"The Avengers project is being designed for gamers worldwide and will be packed with all the characters, environments, and iconic moments that have thrilled longtime fans of the franchise," Marvel's press release states. "Featuring a completely original story, it will introduce a universe gamers can play in for years to come. More details on The Avengers project and other games will be announced in 2018."
Click to expand...
MARVEL ENTERTAINMENT AND SQUARE ENIX TEAM UP FOR MULTI-YEAR, MULTI-GAME CREATIVE PARTNERSHIP
Original Blockbuster Games in Development at Award-Winning Square Enix Studios Crystal Dynamics and Eidos-Montréal

GLENDALE, Calif. & TOKYO, JAPAN (January 26, 2017) &#8211; Marvel Entertainment and SQUARE ENIX® today announced a new multi-year, multi-game licensing agreement to develop and publish original games based on beloved Marvel Super Heroes, beginning with The Avengers. This newly established partnership pairs the creative minds at Marvel and Square Enix for one of the most powerful alliances in interactive entertainment. The first blockbuster game is being crafted by Crystal Dynamics®, developers of the award winning TOMB RAIDER® series, in collaboration with Eidos-Montréal, the home of the critically acclaimed and award-winning DEUS EX game series.

The Avengers project is being designed for gamers worldwide and will be packed with all the characters, environments, and iconic moments that have thrilled longtime fans of the franchise. Featuring a completely original story, it will introduce a universe gamers can play in for years to come. More details on The Avengers project and other games will be announced in 2018.

The world premiere teaser trailer of The Avengers project can be seen here.

”By partnering with Crystal Dynamics and Eidos-Montréal, we are now working with two of the industry's most talented and respected game development studios to bring Marvel stories to life in ways our fans have never experienced,” said Jay Ong, Senior Vice President, Games & Innovation, Marvel Entertainment. ”The Avengers project is a perfect example of how Marvel is making games a key part of the landscape for Marvel storytelling, alongside comics, television and film. We can only do this by matching our greatest Super Heroes with the world's top developers, such as the creative minds at Square Enix."

”Marvel's diverse, innovative universe has created millions of longtime fans, including all of us," said Phil Rogers, CEO, Square Enix Americas and Europe. ”It's exciting to bring together Square Enix's award-winning development studios with Marvel's extraordinary storytellers to establish a new entertainment powerhouse. This collaboration of passion and talent will craft epic, imaginative experiences allowing gamers to live out their Super Hero dreams like never before."

Crystal Dynamics is the studio behind the critically acclaimed and world-famous TOMB RAIDER franchise, which has sold over 48 million copies worldwide. With over 30 video game titles released and hundreds of awards, the heroine Lara Croft has been a cultural icon for 20 years and has made an indelible mark on virtually every facet of entertainment. The most recent release, Rise of the Tomb Raider®, has received over 100 awards and nominations and is one of the highest rated games on next generation systems.

Eidos-Montréal is the award-winning studio behind the relaunch of the DEUS EX series. In 2011, the studio made its mark with the critically acclaimed Deus Ex: Human Revolution®. Its sequel, Deus Ex: Mankind Divided&#8482;, was released in 2016 and received more than 100 awards and nominations.
Click to expand... 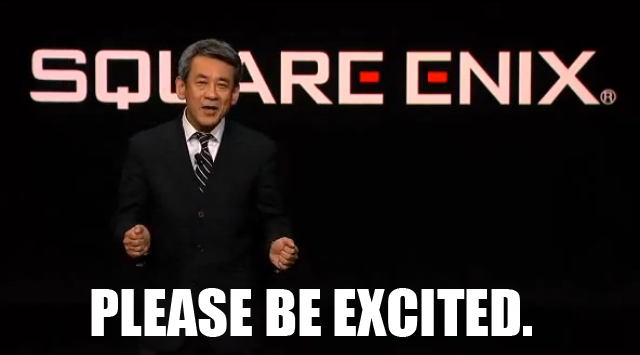 Too many gif opportunities to pick just one.
B

Oh, well. Not sure what to feel just yet.
K

Multi-game partnership leading with The Avengers.

That much closer to Thor the Dark World being in KH3.
B

Starting with The Avengers Project "Reassemble"

I just thought this was going to be a Kingdom Hearts thing, but this seems like a better outcome.

Disappointing to me personally. Not a marvel fan.
N

About what we expected from all the hints. Hopefully it turns out well.
F

Well, this was unexpected.
S

going from activision to square enix. could and should be good
P

Wow, starting with the Avengers from the get-go.

Hope we get a Black Panther game out of it.
L

bananafactory said:
Crystal Dynamics and Eidos Montreal
Click to expand...
So I guess with Eidos Montreal working on Tomb Raider and now this, no more Deus Ex huh...
D

Marvel is doing a lot of good these days.
T

Crystal Dynamics and Eidos Montreal are working on titles!
D

Potentially interesting I guess? Hard to be excited by nothing shown. But I'll be awaiting news.
R

Chaserjoey said:
Lol @ everyone who thought it would be a KH3 / Marvel world
Click to expand...
Yeah, thank God for that. Keep Marvel and Star Wars out of my KH.
B

More details on The Avengers project and other games will be announced in 2018.
Click to expand...
RIP
I

This is megaton for me.

So a full fledged Marvel game being developed by Squenix?

So this is the equivalent of EA and Star Wars? Nice.
L

sense said:
going from activision to square enix. could and should be good
Click to expand...
Seems like a good business move on both parts
P

A spider-man game from insomniac, and now an avengers game from Crystal Dynamics, what an age we live in.`
M

I can't believe we're finally getting a Thor: The Dark World game
G

This is worse than that ariana grande thing.

I guess Marvel's serious about getting back into console games in a big way. First Insomniac, then Capcom, now Square-Enix.
G

Great marvel games are back in full swing. First the marvel vs games and Spider-Man, now this.
T

Give the Spider-Man game rights back to Marvel!

Hyped! We may finally get the Avengers game we deserve. Are Crystal Dynamics & Eidos Montreal working on the same game or are they different projects?