(swiped from redditor Websl on r/SF)

It initially appeared to be the same collection of Hyper SFII and 3rd Strike we got on PS2 and Xbox, based on the product description:

LordKano said:
According to someone well in the know in the FGC, the listing is real but description is just placeholder bollocks.
https://twitter.com/Shinkendo/status/891029395288227841
More infos in a few days.
Click to expand...
Shin said:
https://twitter.com/Shinkendo/status/891029395288227841 his second response, add it to the OP
Click to expand...
Scotia said:
Another tweet by ShinKendo. Rough google translation.

"There was this on PS2 for 15 years. For 30 years there will be more games but it is a compiled. I've said too much already."

Coolshop has taken the listing for Street Fighter Anniversary Collection down from their site.

Chaos Sphoenix said:
I saw this on a Finnish webstore: 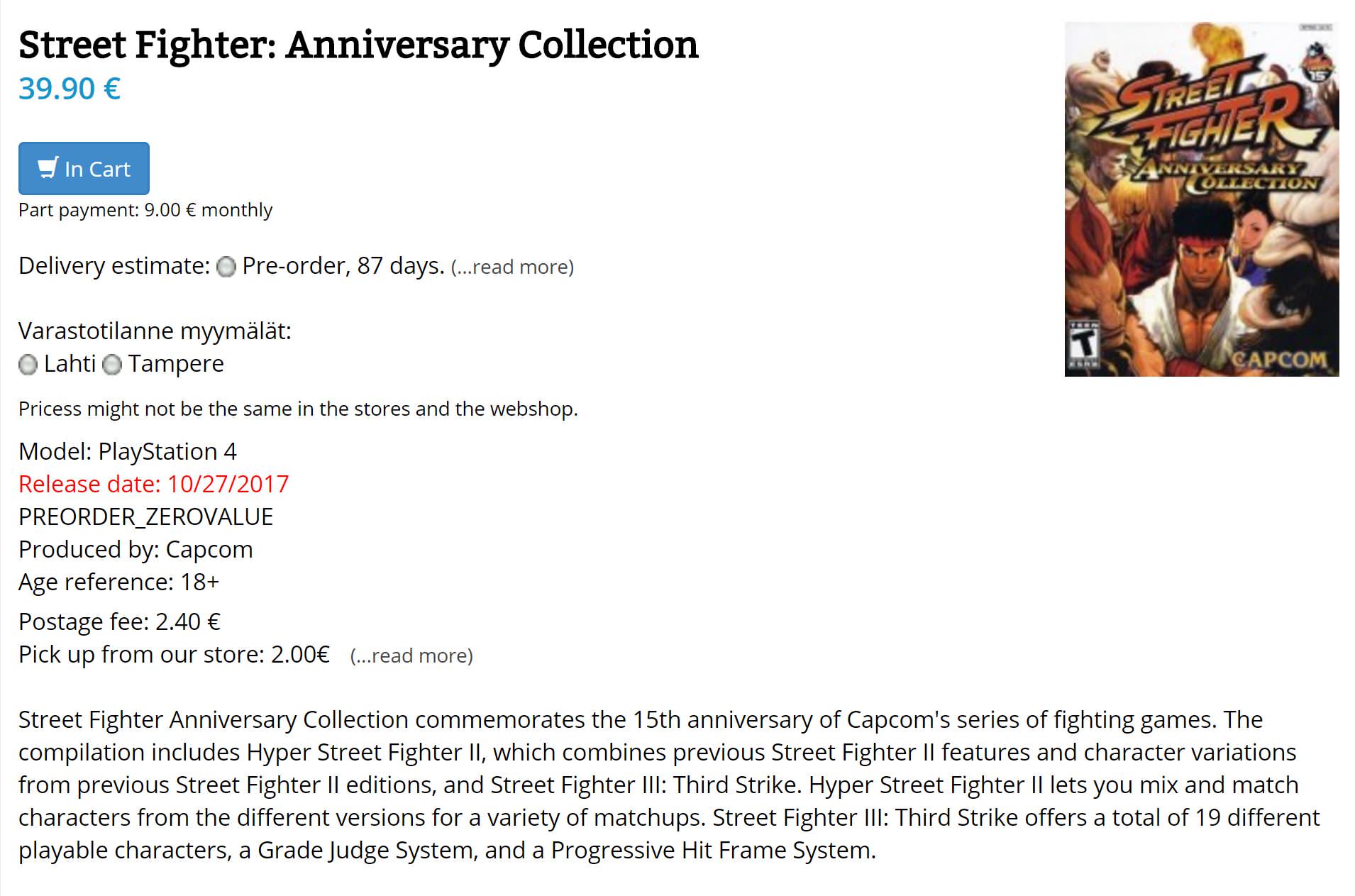 The description is exactly the same posted by OP. Even the artwork is the same placeholder.

However, there are at least two new information:

Probably the PS2 collection. Still would buy though.
B

We are getting XB backwards compatability coming up, would make sense for some new games to show up on the store for download because I doubt most people have discs lying around
B

Please EVO bring back 3rd Strike as the main game next year.
B

I'm not buying this goddamn shit again, I already bought this and the PS2/XBox arcade stick they made
S

Bob White said:
Such a Capcom thing to do...releasing the 15th anniversary game on the 30th anniversary.
Click to expand...
Pretty much.

Shadoken said:
FFS PLEASE Add Alpha Anthology to it.
Click to expand...
SFAA would round out the collection nicely. Maybe they can add USF2 as well.
A

(swiped from redditor Websl on r/SF)

It's the same collection of Hyper SFII and 3rd Strike we got on PS2 and Xbox. Even the product description listed says "Street Fighter Anniversary Collection commemorates the 15th anniversary of Capcom's series of fighting games" even though we're on the 30th anniversary.

I would imagine this was a straight PS2 Classic port, but the XB1 listing suggests something else (if any of this is legit).

Jab, jab, toward short, fierce me if old.
Click to expand...
Great news, I would like some more SF III very much !
K

Well, technically it can be XB1 BC since OG Xbox BC is coming.
P

AlanOC91 said:
I just want to play Alpha 3 again.
Click to expand...
Wrong collection ...if it is the old one
S

Shadoken said:
FFS PLEASE Add Alpha Anthology to it.
Click to expand...
Would be excellent if it is that plus this. Oh boy!
K

I bought the last one they made and regret it till this day. no thanks

Good. Hyper 2 is the definitive version of that game and significantly better than Ultra or HD Remix. Bundled with 3rd strike makes it a no brainer.
L

Shadoken said:
FFS PLEASE Add Alpha Anthology to it.
Click to expand...
This. If it has Alpha then I'm in.
L

I miss Alpha 2. Would buy just for that game.
3

I need a SF3 collection. Someone stole my SF3 DI copy

katsubento said:
Probably the PS2 collection. Still would buy though.
Click to expand...
Oh it was released on the original Xbox.

Hopefully it releases on Steam as well.

I'd be down for this, especially if there's online for both games.
M

So the switch only gets one ( even older) game for 40 bucks, but other platforms get will get this?
S

We're long overdue for some alpha games ported. My favorite games in the series(2 & 3)
M

JusDoIt said:
It's the same collection of Hyper SFII and 3rd Strike we got on PS2 and Xbox.
Click to expand...
well fuck that. we need alpha 3 max on consoles
T

Scotia said:
Oh fuck please be real. I fucking need Third Strike on PS4
Click to expand...
Omg yes, though I recently bought it on PS3 lol I'm about to switch to PS4 so would double dip.
L

It seems so unreal. I can't believe 3rd Strike, the BEST FIGHTING GAME OF ALL TIME is making it to the PS4! It still looks so good! THEM SPRITES. 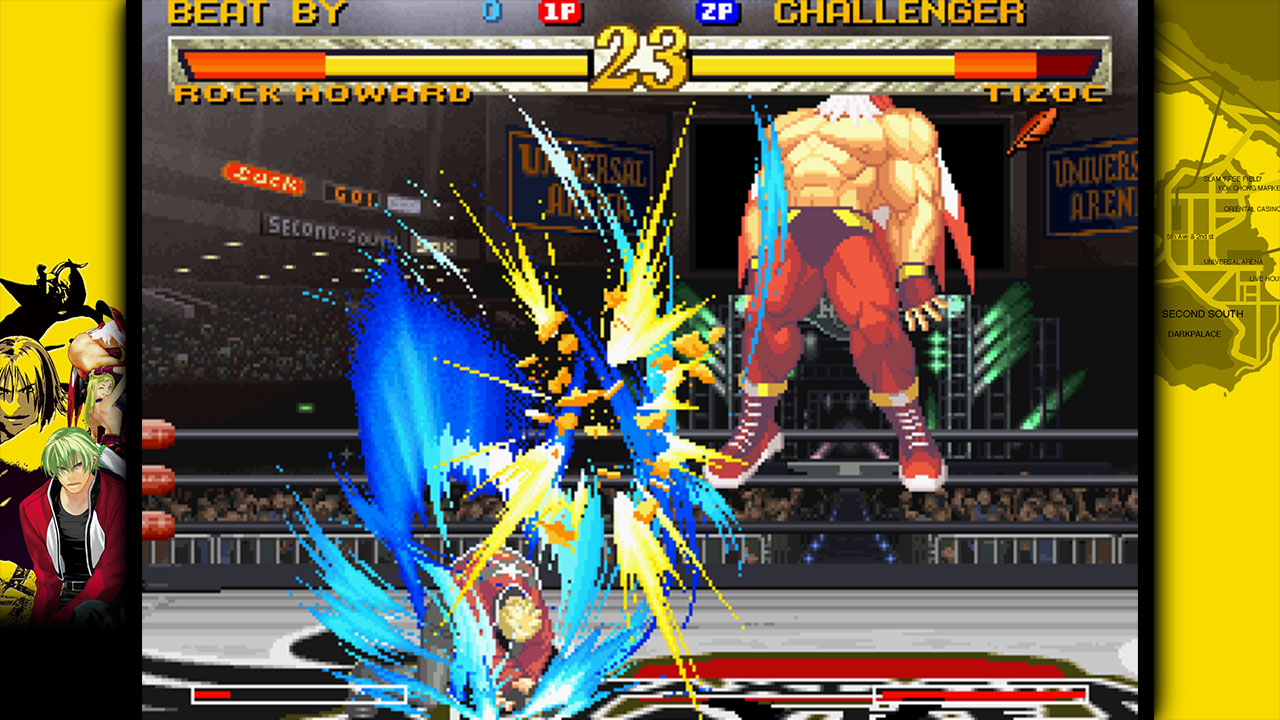 Is it gonna look like shit on my 4K TV?
S

lucebuce12 said:
It seems so unreal. I can't believe 3rd Strike, the BEST FIGHTING GAME OF ALL TIME is making it to the PS4! It still looks so good! THEM SPRITES.

Click to expand...
Yeah, unfunny meme and all, but Garou is legit

GIVE ME ALPHA 2 ONLINE

Please include 3rd Strike and Alpha 2/3.

Scotia said:
Yeah, unfunny meme and all, but Garou is legit
Click to expand...
Bro, that's 3rd strike who mentioned Garou? Though I'll admit, Garou is a great looking game too! 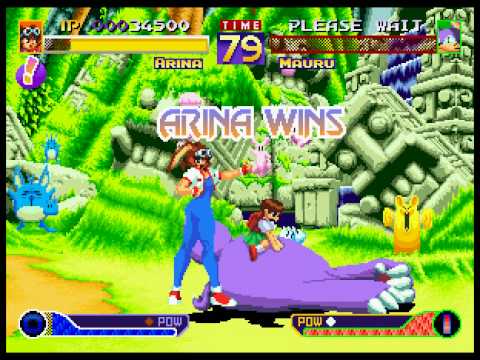 Click to expand...
Nah fam, this is Third Strike

Switch users already passed the test. They'll get the individual games for 49 EUR each.
N

Oh yeah, this is probably just OG Xbox BC and PS2 classics.

Sounds like the exact same thing they released on the PS2 13 years ago.

Click to expand...
Scrub please, get in on dat Ultra Street Fighter IV