5th being Hulkamania and the 6th being The Madness

EviLore said:
Basically, up to this point, we've observed four fundamental forces in the universe:

Our understanding of the universe, galaxies, solar systems, stars, the Earth, atoms, and subatomic particles is all based on these physical forces.

But, we clearly have an incomplete picture, as dark matter and dark energy, among other things, demonstrate.

This Muon g-2 experiment has demonstrated the existence of a previously unknown fifth force. This is looking like the biggest physics breakthrough in decades.

Understanding electromagnetic forces and mechanics brought about the industrial revolution. Understanding nuclear forces brought forth the atomic age. We don't have any idea what this discovery could mean, yet, but it's probably a Big Deal.
Click to expand...

Its really what keeps us from making space/interplanetary living easier
Reactions: EviLore
A

DigitalAddiction said:
Any idea on how frequent experiments come in at or around 4.1 sigma? I assume this is pretty rare.
Click to expand...

Why would you think it's rare? Plenty of experiments have been almost but not quite there in terms of how watertight the results are, including all the time they were searching for the God particle until they got to 5 sigma
Last edited: Apr 14, 2021
Reactions: CloudNull

MaestroMike said:
kinda wish i grew up in the steroids/cocaine era they had so much fun

This is known as the Anomalous magnetic dipole moment (ie, something is making Leptons behave unpredictable inside an electromagnetic field) and has been known for a while. According to the standard model, Magnetic movements should be simply to predict using the Dirac equation, but in reality its never actually accurate due to this.

For electrons, this anomalous movement is miniscule and believed to be caused by quantum effects. But Muons (heavier versions of electrons) show much greater deviation, upwards of 4.2 standard deviations and this experiment is trying to prove that its caused by something greater than just quantum physics.

No experiment of this type has been done with tau leptons (even heavier than muons). If we ever have the technology to do one, it would be interesting too se if they deviate even more.
Reactions: InverseAgonist and Shaqazooloo Either it's in Particle Magazine or I don't believe it. 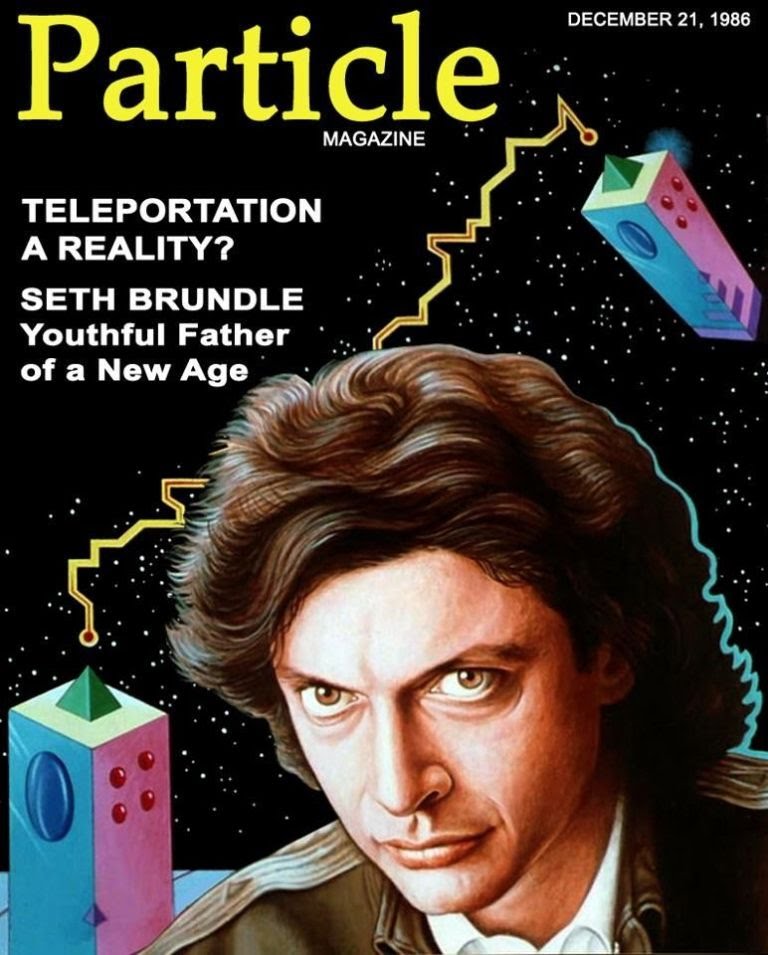 mekes said:
Either it's in Particle Magazine or I don't believe it.

Is that Jeff Goldblum??
Reactions: ArtemisClydeFrog and mekes

Vier said:
Is that Jeff Goldblum??
Click to expand...

Yes sir. From Cronenbergs version of The Fly

Now they have to re do all those universe documentaries.
Reactions: Vier and mekes

mekes said:
Yes sir. From Cronenbergs version of The Fly
Click to expand...

Vier said:
Is that Jeff Goldblum??
Click to expand...

No it's the guy from Jurassic Park
Reactions: Vier and Alter_Fridge
A

ArtemisClydeFrog said:
No it's the guy from Jurassic Park
Click to expand...

The Lawyer who gets eaten on the toilet?
Reactions: ArtemisClydeFrog

Alter_Fridge said:
The Lawyer who gets eaten on the toilet?
Click to expand...

No that's the guy from Independence Day
A

ArtemisClydeFrog said:
No that's the guy from Independence Day
Click to expand...

Lepton the Force be with μ

Yeah but can it run crysis remastered in bc mode??

If there’s any validity to this, it could begin to explain the nature and rate of the universe’s expansion (which we really don’t understand).

The whole idea of dark energy annoys the shit out of me, and I want it solved before I pop my clogs.
Last edited: Apr 14, 2021
Reactions: Swauny Jones
N

MaestroMike said:
kinda wish i grew up in the steroids/cocaine era they had so much fun

People don't know how to have fun nowadays. Everything is so dour.
Reactions: MaestroMike
A

Vier said:
I wonder if this discovery will speed up humanity's progress towards a Type I civilization.

Hard to say...
There's a big threat going on on this planet: Religions. They're everywhere.
And they think that they have access to the ultimate truth of this universe, and moreover, they think that the believers (of each religion) are the 'chosen ones' of their own God. Thus, they protect their turf and act with hatred against anything/anyone that does not abide by their dogma and creed. Religions are just institutions that protect their turf and apply imperialistic agenda on planet earth. Once you go beyond planet Earth religions cease to be valid and become meaningless/pointless.

Therefore, in order to become a Type I civilization (according to Nikolai Kardashev) we have to find ways to unify the peoples of this planet. One very bold and daring step/prerequisite would be to get rid of all religions.
In order to climb the Kardashev scale as a technological civilization, you need to show out there in the cosmos, that as civilization and species you're growing/evolving in cosmic maturity and cosmic modesty. And through science, you are able to understand the inner workings of the cosmos.

The power of dreams.
P

EviLore said:
But, we clearly have an incomplete picture, as dark matter and dark energy, among other things, demonstrate.
This Muon g-2 experiment has demonstrated the existence of a previously unknown fifth force. This is looking like the biggest physics breakthrough in decades.

Muons are at a similar scale to electrons and the measurements involved with this Muon g-2 experiment are very tiny. Particle physics requires extreme p-values for discoveries because of the roles of chance involved at that scale--as opposed to, say, testing whether a COVID vaccine is effective, which is a much more straightforward observation. The last significant discovery for particle physics at that 5-sigma threshold was the Higgs boson in 2012, I think. To my knowledge, they're looking to get to 5-sigma on this by next year.

The observation of the Higgs boson confirmed our existing theoretical model of particle physics. We had been looking to confirm it for decades, and the Large Hadron Collider was built in part to do so. This is the discovery of a new fundamental force that was previously unknown.
Click to expand...

While i am not physicist i follow this subject for good 10-15 years. So i need to clarify some things here. I write it down because i follow subject for a good while and i see shitload of press or even researchers themselves mudding the water to what is happening because most of the time explaining correctly is just too hard or too boring to excite public. Which is why we get "god particle" or "higgs gives mass to everything" or like in this case "new force"

1. It does not prove that there is new fundamental force at play here. Experiment only seems to confirm that there is something unknown at play here that is not predicted by standard model. Basically we are looking here probably at particle that was previously not on standard model map that is interacting with muon decay because in math we get one outcome and in experiment we get slightly different and the only explenation right now seems to be new particle. Whatever this particle will be bozon or fermion or something completely different is yet to be answered. Which means it can be new "standard" particle it could be new force but it also can be something completely different (though not really high chance for that).

2. Sigma 4.1 is high confidence but requirement for sigma 5 is requirement for a reason. 1 in 40k sounds big but any mistake or "hacking" in process can still make it in reality 1/2 or 1/10. Sigma 5 is such high confidence (1 in 3,5mln) that it just hard to hack it or adjust to get outcome you want. While physics community is excited by results it should be also noted that it was not exactly separate experiment from that 20 years ago because main component that was used for it was literally same thing from that experiment 20 years ago and it was literally transported over to chicago from NY and this outcome could still be just anomaly in building of that hardware rather than real outcome.

So what that means ? More testing and proper sigma 5 confidence. When there will be separate experiment confirming it with sigma 5 then we can talk about something new. What exactly is to be determined. Main theory for now is that some new bozon is interacting with Muon decay.

3. The observation of the Higgs boson did not confirm standard model. Higgs bozon was expected to be found and standard model was "confirmed" ages ago, it was not also "the last puzzle" or anything like that. I say "confirmed" because it is only agreement of current state of how we categorize things not statement of fact. We know for sure that standard model is wrong. For one it does not include general relativity in it. It is fundamentally quantum mechanics model which as we know can't work with gravity at all in current form, good chunk of physicist think that there should be graviton particle as force carrier of gravity but no one ever found it. That is one of reasons, the other reasons are unsolved problems of 2 extra generations of particles that no one expected and showed up in it and no one ever shows proper "standard model chart" with them in it Muon is one of them as heavier copy of electron. Another huge problem is dark matter. We know for sure that dark matter are particles just like those in standard model but they definitely are not part of supersymetry standard model. We know in fact that supersymetry proposed in 40s is wrong since pretty much time it was prosposed due to internal problems of that model.

So to sum this point, standard model is very rough description of force carriers and matter particles in which there exist 2 other generations of bozons and fermions we don't know why they exist and no one wanted them there and it covers only small part of reality. That small part though is mostly what we see and is important to us. The dark energy problem is completely separate issue that has nothing to do with particles and standard model. For one it might not exist at all depending on finished theory combining both GR and QM, secondly it might be completely something else. Right now if i remember correctly it is assumed that this is constant "pressure" rather than new particles.

While there are shitload of articles about such stuff almost all of them get half or everything wrong. Thanks to YT there are now enough great channels hosted by proper physicists that show exactly what something is. I reccoment PBS space as perfect source for novices in subject though it requires watching some back catalogue of it to be in shape to listen something newer and to properly understand it.

Here is their take on it which is much more subtle and imho clear:

Yes, most of these points have already been discussed over the course of this thread, and that video is linked in the OP.
You must log in or register to reply here.