UPDATE: Looks like this is rolling out nationwide at the end of the month (August 31, 2017):

Taco Bell is bringing a breakfast taco with a fried egg as the shell to the table with the upcoming debut of the Naked Egg Taco on August 31, 2017.

Beyond the fried egg shell, the taco includes a filling of a choice of bacon, or sausage plus crispy potatoes, nacho cheese sauce, and shredded cheese. There's also a "dressed version" that places the whole Naked Egg Taco in a Gordita flatbread.

The new breakfast item will carry a suggested price of $1.99 and will also be available in a combo along with a cup of coffee or medium fountain drink as well as either two Cinnabon Delights or a hash brown patty for $3.99.
Click to expand...

Taco Bell has already tried waffles, biscuits, and croissants as taco shells for their breakfast burrito so it shouldn't come as much of a surprise that they'll be testing a fried egg as a taco shell for breakfast in Flint, Michigan starting April 18, 2017.

They're calling it the "Naked Breakfast Taco" and it features a shell that's literally a folded fried egg that can be filled with potato bites, sausage crumbles or bacon, nacho cheese sauce, and shredded cheddar. As long as you forego the potato bites, it should make for a pretty good option for a low-carb diet.

For those who aren't ready to go "naked" there's also a "dressed" version that covers up the egg with a warm Gordita flatbread.
Click to expand... 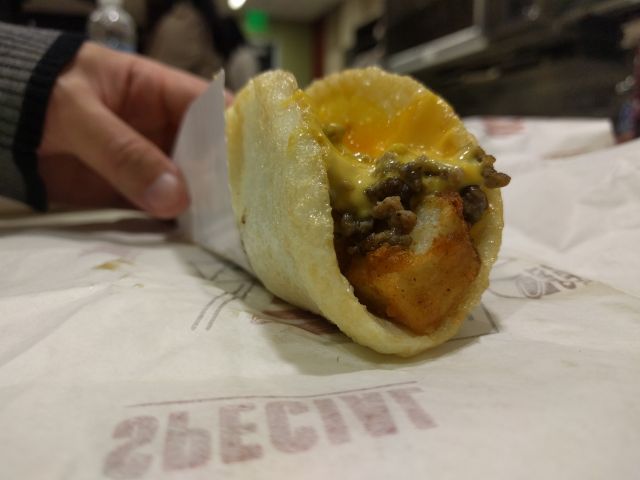 I'm usually with you, TB.

This is gross though. That much egg will make me gag.
V

America. A country that will provide a city with fried egg taco shells before it provides it with drinking water.

Should be a hasbrown shell with egg liner.
H

In Flint? That's a first for this kind of thing.
N

I'm usually with their wacky ideas, but reaching too close to the sun this time, taco bell.
G

I would try the dressed version.
A

Their cheesy bean and rice burrito is the only thing they serve that looks appetizing and consists of real food.
T

Taco Bell near me doesn't open for breakfast so I can't even try these weird things.
Z

That look delicious. I'm in.
G

As a person who loves limited run fast food items, especially from t bell, I'm gonna have to pass on that.
V

Yum brands needs to work on bringing the Tower Burgari in iceland over to the states instead. This is hot garbage.

One second thought, the quality might not be the same.
L

This isn't really weird. How is this different than an omelet wrap?

Rats Off To Ya

I'm a very big fan of Taco Bell but nothing on their breakfast menu has impressed me, and some of it I actively dislike. I don't have high hopes for this.
A

Why Flint, MI? Are they treating the city as some kind of scientific test bed of human guinea pigs exposed to all sorts of unnaturally found chemicals?
B

It's not the strangest low-carb option I've seen. I agree with a poster above that it'd be better if the egg was mixed with something.
T

Been using egg (mostly egg white, with one yolk) as a burrito shell of sorts for years. Aside from high carbs, flour tortilla's are so many damn calories.
D

Rather have the naked chicken taco...it looked tasty...
D

SummitAve said:
Should be a hasbrown shell with egg liner.
Click to expand...

Isnt this just eating your omelette without a fork?
N

hasn't Flint been through enough?
M

I bet it tastes... egg-cellent


Nah, I bet it gross as fuck
P

LizardKing said:
This isn't really weird. How is this different than an omelet wrap?

This is way less weird and gross than the naked chicken thing.
M

testing a fried egg as a taco shell for breakfast in Flint, Michigan
Click to expand...

Why would you be testing any food or drink in Flint, Michigan?
D

The have been messing around with shells quite a lot lately...

I would absolutely fuck with this.
M

That actually looks pretty good, it is effectively an open omelet in a way.
S

we all knew her

Absolutely not. These are going to be frozen, pre-cooked eggs, which are disgusting 100% of the time. I'm normally all over Taco Bell's craziness, but this is a hard pass.
P

Boiled in what water?
H

Still mega pissed it's gone. Health be damned, I had this several times in the limited time it was out and really miss it.
T

Flying to close to the sun there, TB.
B

This looks terrible. Even the naked chicken chalupa is terrible. Too damn oily.
S

They need to stand up to the constant abuse.

This does not look good at all.

sixteen-bit replied
Jun 3, 2017
Okay, this is lazy even for Taco Bell - latest Ohio test item is the Taco Burrito
2