The brain senses touch beyond the physical limits of the body, through tools 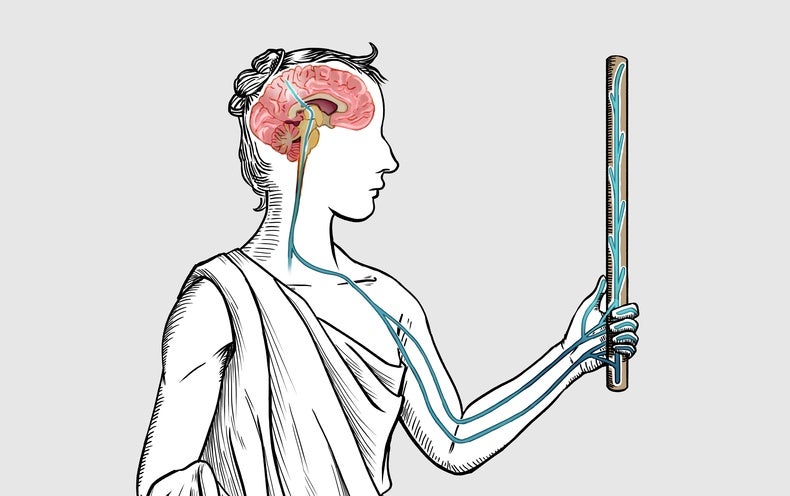 The Brain Senses Touch beyond the Body 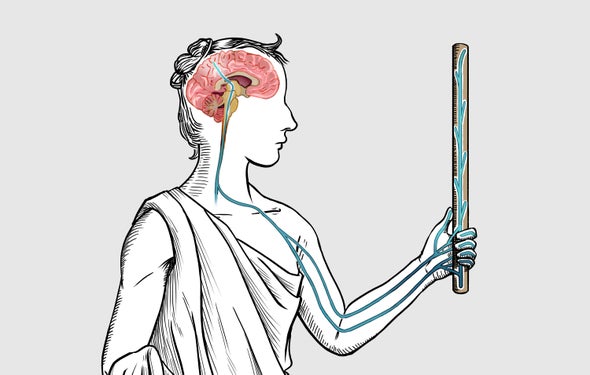 Luke Miller, a cognitive neuroscientist, was toying with a curtain rod in his apartment when he was struck by a strange realization. When he hit an object with the rod, even without looking, he could tell where it was making contact like it was a sensory extension of his body. “That’s kind of weird,” Miller recalls thinking to himself. “So I went [to the lab], and we played around with it in the lab,” he say

Sensing touch through tools is not a new concept, though it has not been extensively investigated. In the 17th century, philosopher René Descartes discussed the ability of blind people to sense their surroundings through their walking cane. While scientists have researched tool use extensively, they typically focused on how people move the tools. “They, for the most part, neglected the sensory aspect of tool use,” Miller says.

In a 2018 Nature study, Miller and his colleagues at Claude Bernard Lyon 1 University in France reported that humans are actually quite good at pinpointing where an object comes into contact with a handheld tool using touch alone, as if the object were touching their own skin. A tool is not innervated like our skin, so how does our brain know when and where it is touched? Results in a follow-up study, published in December in Current Biology, reveal that the brain regions involved with sensing touch on the body similarly processes it on the tool. “The tool is being treated like a sensory extension of your body,” Miller says.

In the initial experiment, the researchers asked 16 right-handed subjects to determine where they felt touches on a one-meter-long wooden rod. In a total of 400 trials, each subject compared the locations of two touches made on the rod: If they were felt in different locations, participants did not respond. If they were in the same location, the people in the study tapped a foot pedal to indicate whether the touches were close or far from their hand. Even without any experience with the rod or feedback on their performance, the participants were, on average, 96 percent accurate.

During the experiment, researchers recorded subjects’ cortical brain activity using scalp electrodes and found that the cortex rapidly processed where the tool was touched. In trials in which the rod was touched in the same location twice in a row, there was a marked suppression of neural responses in brain areas previously shown to identify touch on the body, including the primary somatosensory (touch) cortex and the posterior parietal cortex.

There is evidence that when the sensory brain regions are presented with the same stimulus repeatedly, the responses of the underlying neural population gets suppressed. This repetition suppression can be measured and used as a “time stamp” to signify when a stimulus is extracted in the brain.

When the team tested some of the same subjects with touches on their arm instead of the rod, it observed similar repetition suppression in the same brain regions on similar time scales. The somatosensory cortex was suppressed in 52 milliseconds (about one twentieth of a second) after contact on both the rod and the arm. At 80 milliseconds, that activity suppression spread throughout the posterior parietal cortex. These results indicate the neural mechanisms for detecting touch location on tools “are remarkably similar to what happens to localize touch on your own body,” says Alessandro Farnè, a neuroscientist at the Lyon Neuroscience Research Center in France and senior author of both studies.

Interestingly, after each contact, the rod vibrates for about 100 milliseconds, Miller says. “So by the time the rod is done vibrating in the hand, you’ve already extracted the location dozens of milliseconds before that,” he adds. The vibrations on the rod are detected by touch sensors embedded in our skin called Pacinian receptors, which then relays neural signals up to the somatosensory cortex. Computer simulations of Pacinian activity in the hand showed that information about rod contact location could be extracted efficiently within 20 milliseconds.

The vibrations on the rod may provide the key information needed for touch localization. Repeating the same rod experiment, the researchers tested a patient who lost proprioception in her right arm, meaning she could not sense the limb’s location in space. She could still sense superficial touch, however, and she was able to localize where the rod was touched when held in both hands and had similar brain activity as the healthy patients during the task. That finding “suggests quite convincingly that vibration conveyed through the touch, which is spared in the patient, is sufficient for the brain to locate touches on the rod,” Farnè says.

Taken together, these results indicate that people could locate touches on a tool quickly and efficiently using the same neural processes for detecting touch on the body. While Farnè emphasizes that no one in the studies thought the tool had “become part of their own body,” he says the work indicates the subjects experienced sensory embodiment, “in which the brain repurposes strategies for dealing with objects by reusing what it knows about the body.”

“This is really beautiful, comprehensive and thoughtful work,” says Scott Frey, a cognitive neuroscientist researching neuroprosthetics at the University of Missouri. Frey, who was not involved with the studies, believes that the results could help inform the design of better prostheses because it suggests that “insensate objects can become, potentially, ways of detecting information from the world and relaying it toward the somatosensory systems,” he says. “And that’s not something that I think people in the world of prosthetics design really thought about. But maybe this suggests that they should. And that’s kind of a neat, novel idea that could come out of it.”
Reactions: levyjl1988, ROMhack, mortal and 12 others

EviLore said:
the participants were, on average, 96 percent accurate.
Click to expand...

EviLore said:
“in which the brain repurposes strategies for dealing with objects by reusing what it knows about the body.”
Click to expand...

man this is insane. the human brain is, in the truest sense of the word, awesome. everyday im more convinced that the brain is really doing it's own thing and our consciousness and physical bodies are just passengers along for the ride, having little to no control over the infinitely complex things that it does for us every millisecond of every day. im sure philosophy OT could chew on this for a while.

Do we control the brain or does the brain control us?
Reactions: bati, Grand Theft Scratchy and Kev Kev
P

Maybe we really can't say the brain does anything. Maybe brain is like an anthill, with a lot of tunnels where things are moved around. Brain in itself perhaps isn't a thing that does something but it's a tunnel system for something else to move around in.
Reactions: Ikutachi and Kev Kev

I thought this was known phenomena. I have always been able to explain this.

To me, I thought this was intuitive. When sweeping the floor, you feel instantly that something is wet or stuck.

While a bit obvious, this makes sense.

A big part of our meteoric ascent is our ability to either adapt tools for a situation, or create them. We essentially use tools as much as our own bodies, and we’ve been doing it forever, so some kind of cognitive adaptation to facilitate that is very logical.

While the way it maps out in our brains is neat and there are most assuredly a lot of factors at play, this particular experiment seems pretty simple to explain.

If you're holding a rod with one hand, the rod will be moved more easily when touched by something further from your hand than it would when coming into contact with something closer to the hand, because of the difference in stability. Similar to how it's easier to steer a grocery cart when the heavy groceries are towards the back of the cart, putting the weight closer to your hands where you can better control it.

Pair that with vibration and hearing, along with the sheer muscle memory we've all built by utilizing various tools, and it's not very surprising that you can work out the general area where the rod was touched in this experiment.

Still cool though, and goes to show how much we take our brains for granted.
L

The Rubber Hand experiment sort of presaged something like this. It's basically an amalgamation of the mind's ability to "empathize" (in a somatosensory sense) and our incredible proprioceptive abilities. I don't keep up with the literature in the field as much as I should considering how interesting neuroscience is to me in general, but it's surprising to me that this hasn't been studied/proven before.
Last edited: Dec 27, 2019 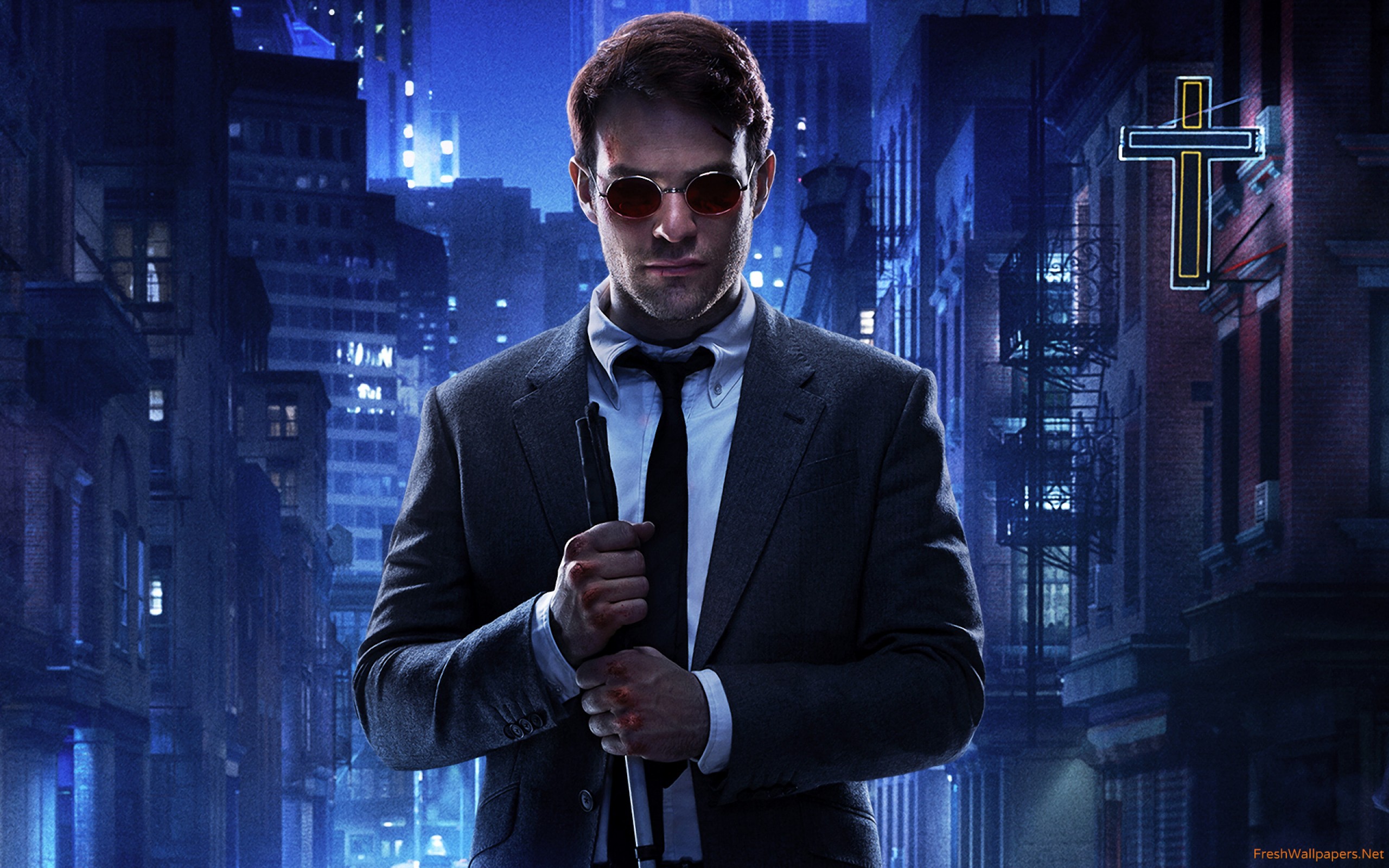 I got nothing intelligent to add to the conversation, so here’s a picture of Matt Murdock from my favourite Marvel live action stuff and fictional sensory king, after reading tgis information, his sense skills seem even cooler to me now with this information apart from the obvious fictional stuff
Last edited: Dec 27, 2019
Reactions: EviLore

Thanks for sharing. This is definitely going in my work news roundup next week.

More like people recognize different vibrations in there hands through experience and can calculate distance from it.

Feel like this guys just described that in a different way to make it sound more interesting then it actually is.
You must log in or register to reply here.