The Elder Scrolls V: Skyrim... coming to PS4 and Xbox One? (Bethesda: Nope) 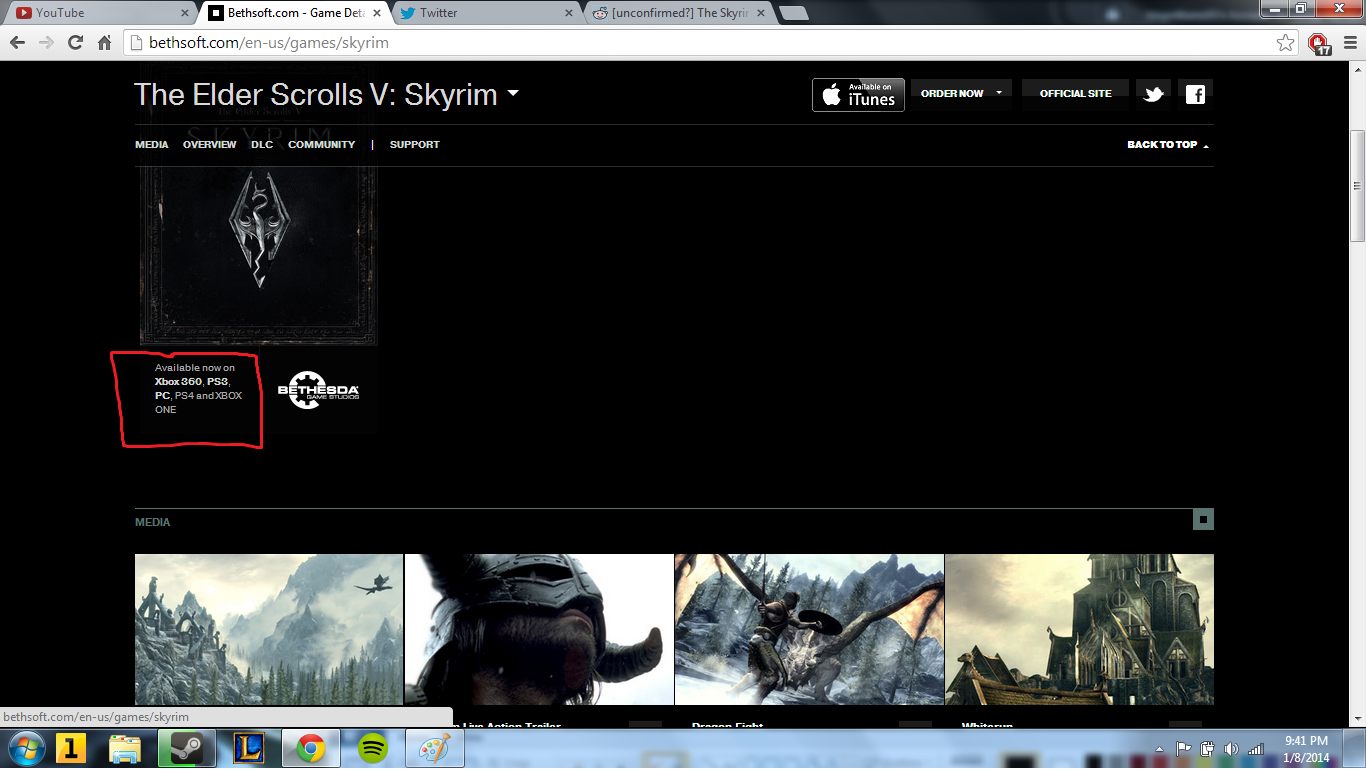 A mistake or a leak?

Original source is from here: OnlySP

Could Skyrim be making its way to next-gen systems?

An email sent out earlier today may indicate Bethesda will be announcing this on the 12th of January. Along with the email, the Bethesda website lists Xbox One and PS4 versions of the game on its product listing. One thing of note with the product listing is that the versions of the game that have already been released, such as the Xbox 360 version are highlighted with a link, while the next-gen versions are not, yet.

It seems odd that Bethesda would be updating the game for next-gen consoles due to its age, but I suppose it&#8217;s not out of the question as Tomb Raider is doing the same thing.
Click to expand...

Image from the email:

I be down for it with all the technical issues fixed of course.

Says available now so I am guessing no though.
B

Look At All That RAM Edition
D

I've played through it 3 times. LOVED THE GAME.

But I've put it behind me and look forward to playing some Fallout 4 and next Elder Scrolls (not online) whenever they may come.
S

Ram is proportional to nightmares on PS Skyrim, have fun!

All it would be is all the dlc + their high res textures. Seems like most everyone that wanted to play that game already has.
S

I still haven't played it. So, I look forward to a next-gen version.
S

Would be awesome if they fixed all the glitches. I'd definitely play Skyrim again.
T

Nothing can beat PC with super HD texture mods and ENB.
A

My money's on typo, but I'm always for more next-gen up-ports.
B

I would probably get it again if true.
S

Be still my beating heart.

Bethesda, I will fucking quadruple dip. Already bought on Xbox 360, and PC for $60. I will instantly fucking buy it on both the PS4 and Xbox One at $60, if it includes all DLC.

Lets get some Fallout 4 or Elder Scrolls 6
F

I would buy it a third time if true.
L

For some reason, I would be interested in Skyrim on eighth generation consoles. I am part of the problem. But the added muscle, and hopefully refinement, would make Skyrim a different beast than it was for 360 and PS3 buyers.

Or it's a typo that's doing an expert job torturing us.
T

Bethesda, I will fucking quadruple dip. Already bought on Xbox 360, and PC for $60. I will instantly fucking buy it on both the PS4 and Xbox One at $60, if it includes all DLC.
Click to expand...

I'd triple dip. Up there as one of my games of the gen.
C

I'm in, it'd be nice to have mod support on those versions too.
S

Because Skyrim is awesome. Can never have enough Skyrim in my life.
S

I couldn't imagine myself playing Vanilla Skyrim, even if I play on low on PC for performance. So many gameplay mods I couldn't do without (that I'll miss in TES6 while I wait for them to be made for the new game).
D

I really liked the 3-4 hours I played and always intended to go back to it. Even picked up the DLC back when it was on sale, maybe I should hold off a bit longer...

Fucking love Skyrim, but don't think I would double dip unless they really beefed up the graphics.

After playing it modded for so long it would be hard to go back to vanilla at 1080p.


(Or if they got rid of indoor/outdoor loading cells and made windows transparent. My most wanted feature of next gen fallout and elder scrolls.)
S

Bethesda, this is nice and all. But you know what we really want. Hint: it ends with the number 4, and starts with Fallout.
B

Without mod support to fix Bethesda's game, no thanks.
V

TheVampire said:
Nothing can beat PC with super HD texture mods and ENB.
Click to expand...

and that's not even the tip of the iceberg.
W

Day one if true
G

I really wanted to do another playthrough with all the dlc on 360 this winter, but if this isn't a typo I'll play on ps4 for sure.
Z

Does it come with good combat mechanic this time?
S

Unstable said:
Bethesda, this is nice and all. But you know what we really want. Hint: it ends with the number 6, and starts with The Elder.
Click to expand...

Fallout 4 and the next single player Elder Scrolls game please
Still Skyrim at 1080p, max settings and 60fps on PS4 would be sweet.
V

Zachi said:
Does it come with good combat mechanic this time?
Click to expand...

Just limit yourself to only using bows and it's decent enough.
S

There's so much content in this game that a lot of people can easily justify double dipping for better graphics/fps and dlc.

I suppose I would bite if it is 60fps/1080p and has all the dlc included. I've had a long enough time away from the game to give it another go, never tried any of the dlc.
K

Would be nice.
G

I bet if it released on PS4 it would still have its share of glitches and problems. Not as bad as the PS3 Betheseda games but this is Betheseda we are talking about.

Can't believe Sony still loves them after all the crappy unoptimized ports Betheseda has given to the PS3. The PS4 commercial with Elder Scrolls online could have been used for a real playstation game like infamous. Hell I would have preferred Watch_dogs as thats more aligned with Playstation than any elder scrolls title will ever be.
T

I would absolutely re-buy Skyrim for PS4.
V

What ultra settings, guys? that's hardly enough. The game should at least look better than vanilla maxed. The XBO and PS4 shouldn't have trouble with it.
B

+1 Rebuy, preferrably digital. I played about 24 hours in a week, and then stopped it because I finally "got" Dark Souls and proceded to replay it over and over. I was rethinking just this week though I'd like to play Skyrim as a pure mage/ranged character though and I missed the DLC. Bring it on, just release it randomly and immediately.
M

Bruno said:
No thanks.

Lets get some Fallout 4 or Elder Scrolls 6
Click to expand...

How about yes please, something to play until those come out.
S

Cant imagine they release a Skyrim around the time ESO launches.
A

It better be looking as those moded screenshots, if not, why bother?
K

It's been two years since I last played Skyrim, and I could see myself getting it again on PS4 if it's no more than $30. I just wish the combat was better.
You must log in or register to reply here.