Score! It's the big 2-0! Humble Indie Bundle 20 is filled with Steam keys and DRM-free builds for Tangledeep, Overgrowth, Among the Sleep - Enhanced Edition, Dream Daddy: A Dad Dating Simulator, and Getting Over It with Bennett Foddy. Plus, your purchase will support a charity of your choice!

Pay what you want. Normally, the total cost for the games in this bundle is as much as $114. Here at Humble Bundle, you choose the price and increase your contribution to upgrade your bundle! Pay $1 or more to access Steam keys.

Support charity. Choose where the money goes – between the publishers and a charity of your choice via the PayPal Giving Fund. If you like what we do, you can leave us a Humble Tip too! 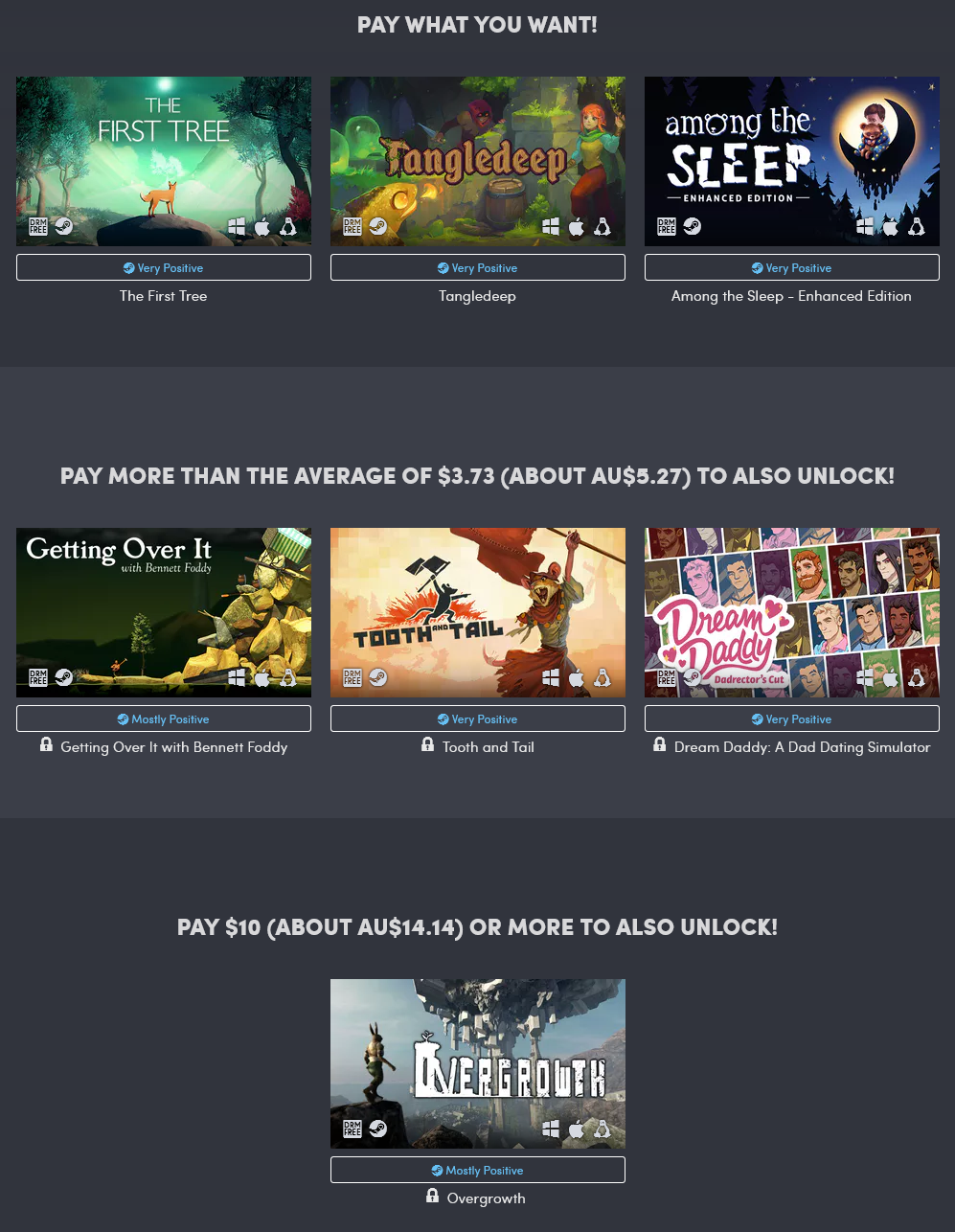 I hear Dream Daddy is very good and cohesive.

Dream Daddy is a good game full of dream daddys

Tangledeep has been on my wishlist for awhile so I guess I'm in for the first tier, none of the rest of them appeal to me.
G

I know I have that last tier game already. Pretty sure it came in one of the monthly bundles. Found it to be boring. No interest in this.
H

Utter turd other than Tooth and Tail. I got Overgrowth in a bundle ages ago and it's utter utter turd. Avoid like the plague. How the fuck is that turd the top tier turding game? Turd.

Humble Bundle after being purchased by IGN, has been mostly crap.

Tier 1: A walking simulator, a roguelike, and a cookie-cuter first person horror from the Indie First Person Horror School Promotion of '14
Tier 2: Two memes and a somewhat interesting RTS? Maybe?
Star game: a mediocre two year old game that has been in like four bundles already

I remember when I purchased all the bundles. Now this... is sad.
H

fermcr said:
Humble Bundle after being purchased by IGN, has been mostly crap.
Click to expand...

In their defence, I think on the indie side there's simply not as much good stuff out there as there was when it first launched. Bundle 1 was worth it for World Of Goo alone, but the rest was.. ok. Bundle 2 was excellent. Braid (brilliant), Osmos (fun little relaxer), Machinarium (gorgeous to look at), Revenge Of The Titans (simple but good fun). Bundle 3 contained Crayon Physics (fun for a short time), the utterly wonderful VVVVVV (best music in gaming, bastard hard), And Yet It Moves was kinda fun too. The Introversion Bundle was pretty cool, indie 4 had Super Meat Boy, 5 had Psychonauts, Limbo, Bastion, all very good games. Bundle 7.. Legend Of Grimrock. Enough said. Bundle 8 with Hotline Miami, Proteus (hey I liked it), Thomas Was Alone and Tiny & Big.. a very strong bundle.

I will add that while those bundles had some wonderful games they also had some absolute shite in them too, garbage filler. The problem is that later there just wasn't much coming out of the quality of those wonderful titles.

ive talked shit on you and now youre givin me free shit. win win baby

Man, I miss the highs of HIB3, 6 and 10. That's what happens when you do new bundle every week.
You must log in or register to reply here.